Submitted Successfully!
Thank you for your contribution! You can also upload a video entry related to this topic through the link below:
https://encyclopedia.pub/user/video_add?id=11195
Check Note
2000/2000
Grape Seed Oil
Edit
Upload a video
This entry is adapted from 10.3390/foods9101360

Grape seed extract has demonstrated many activities in disease prevention, such as antioxidant effects, which make it a potential source of nutraceuticals. Grape seed is a remarkable winery industry by-product due to the bioactivity of its constituents. Methods for recovery of oil from grape seeds have evolved to improve both the quantity and quality of the yield. Both the lipophilic and hydrophilic chemicals present in the oil of V. vinifera L. make this wine by-product a source of natural nutraceuticals. Food and non-food industries are becoming novel targets of oil obtained from grape seeds given its various properties.

1. Introduction: An Overview of Wine to the Past from the Present

Wine is an alcoholic beverage that has been consumed for many years. The beginning of winemaking has been dated to 5400–5000 BC in the southern Caucasus region. From here, wine grape (Vitis vinifera L.) growing spread to Mediterranean countries, where Greek philosophers and European healers noted the healthy benefits of wine products. Consumption of wine became regular amongst Romans, whose Empire helped to broaden winemaking in Europe. Some data also place grape use in Egypt back 6000 years. Socioreligious implications may explain the diverse implementation of wine intake and production in Christian or Islamic regions, as well as its expansion to the Americas [1][2].
Nowadays, the winemaking industry and global consumption of wine are huge socio-economical markets [3][4]. A production of 250–300 million hectoL/year during the last two decades (Table 1) correlates with the environmental impact of this activity and the promising use of wine-derived products in other industries and medicine [5].
Table 1. Wine production by top 15 wine-producing countries [5]. Data are expressed in volume (thousands of hectoliters).
Wine is the result of the chemical fermentation of must or grape (Vitis vinifera L.) juice, carried out by yeasts that consume grape sugars and produce ethanol and CO2. Up to 500 substances are produced though the processes of winemaking, storage, and maturation of the beverage. They are responsible for some of the characteristics and sensory features of wine. Regarding phenolic constituents, or polyphenols, also present in fruit, grains, and vegetables, data from several studies suggest that they have healthy properties [1][6][7][8]. Resveratrol, a non-flavonoid present in trace quantities, is a natural antioxidant and anti-inflammatory compound, known to play a key role in immunoregulation, metabolic syndrome, cardiovascular, neuroprotection, and cancer treatment [9][10][11][12][13][14][15][16][17][18][19][20]. It has also received attention due to its antimicrobial activity against bacterial, fungal, and viral species in vitro [21][22][23][24].
In the winemaking industry, grapes as well as grape residues (pomace or marc), including seeds and lees, are interesting products considering the health benefits of their components. By-products such as oil seeds or pomace yeasts have been reported to be natural sources of bioactive [25][26][27][28][29]. Therefore, wineries have broadened their economic and environmental impact through the use of natural bio-products.

Grapes are one of the most consumed fruits in the world, mostly in the form of juice and wine. Over 1000 species of red and white grapes are extensively cultivated around the world, and their composition influences the wine chemistry [1]. Generally, grapes have juice, pulp, skin, seeds, and stem. Regarding chemical components, the two important layers are (Figure 1): exocarp, which includes terpenes, norisoprenoids, and thiols; and mesocarp, with organic acids and sugars. 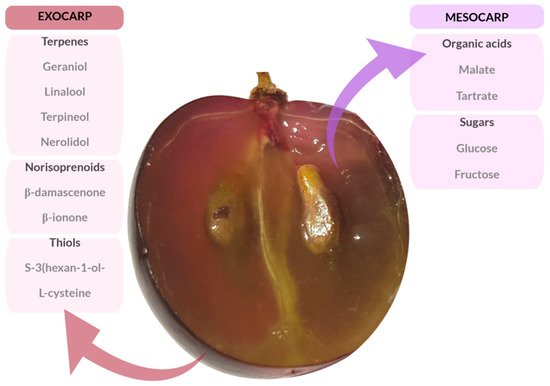 Figure 1. Grape layers: exocarp and mesocarp. The exocarp is the outer layer of the fruit with a pulp rich in terpenes, norisoprenoids, and thiols. The mesocarp is a tissue rich in organic acids and sugars.
Berries are plentiful in sugar, whereas phenolic compounds are inexpensive sources of natural antioxidants and antimicrobial agents that are obtained from grape wastes during winemaking production [30][31][32]. Grape berry phenolics contribute to organoleptic properties of wine, though their composition depends on grape variety and harvest conditions, and even on grape maturity degree. Skin is enriched in tannins and non-flavonoid stilbenes (resveratrol), while non-flavonoid hydroxycinnamic acids are the most abundant in flesh. By contrast, seeds contain mainly flavan-3-ols and many non-flavonoids, including those mentioned in skin and flesh, with a total phenol content in seed 10 times greater than in the peel [33][34]. As a matter of fact, grape seeds and the bioactive oil from them are the main topic of this review.
Grape seeds are a relevant part (10–12%) of the solid residues created from the winemaking process [35]. However, vinification protocols may affect the type of seed obtained in this marc or pomace. Thus, white winemaking generates pomace directly, whereas red wine production includes a maceration period in alcohol prior to obtaining marc; distillation of pomace may lead to grape seed production [36][37]. As already mentioned for berries, phenols and other components of grape seeds may be of interest from a nutraceutical or health-prevention perspective; pomace extraction has been studied to improve phenols yield, with several maceration protocols being developed [38][39]. In line with this, Guaita et al. analyzed the phenolic composition of fermented and unfermented pomaces, reporting no considerable differences after processing. Bordiga et al. explored the oligosaccharides from grape marc distillation as probiotic products [40][41].
The phenols in Vitis vinifera L. seeds provide health benefits and proanthocyanidins, also known as condensed tannins, play a potential nutraceutical role. The antioxidant and free radical scavenging abilities of phenols have been demonstrated both in vivo and in vitro, protecting more than vitamins E or C and β-carotene [42][43][44]. Other activities—such as anti-inflammatory [45], antimicrobial [46], antiulcer [47], and anticancer—have also been reported [48][49][50]. However, the polymerization of the molecules is known to affect their bioavailability, so further research is needed to clarify the potential of tannins as a dietary supplement for humans. [51]. Tannins are rarely present in the oil obtained from Vitis sp. seeds, but are plentiful in polyunsaturated fatty acids, as we discuss in depth in this review. Studies regarding whether the oil extraction method may affect the antioxidant components of grape seed oil should be undertaken [35][52].
Of grape seed extracts, antioxidant and antimicrobial activities can be noted due to their phenolic components [53][54][55]. Additionally, some evidence shows that grape seed extract may provide anti-cancer chemoprevention [56][57][58][59][60][61] and cardio-protection [62]. Hao et al., studied the possible effect regarding hypertension and vascular remodeling to prevent stroke in rats [63]. Vinson et al. tested extract components in a hamster atherosclerosis model [64]. Bijak et al., working with in vitro models, first suggested that extracts could act as a nutraceutical in the prevention of thrombosis [65]. Under ischemic conditions, neuroprotective effects, reducing brain damage, coupled with an anti-apoptotic activity and proteome preservation have been reported in animals pre-treated with grape seed extracts [66][67]. The role of grape seed extracts in attenuating inflammation and delaying the development of Alzheimer’s or acting as a neuroprotection agent in Parkinson’s disease have been reported [68][69]. In rats and mice, grape seed extract was suggested to improve conditions associated with metabolic syndrome [70][71][72]. Grape seed extracts are also beneficial in bone healing [73], skin disorders [74][75], and show a photoprotector activity [76]. Despite these promising results, human consumption of grape seed extract is a controversial topic and not many studies have reported clear conclusions. Only a few trials in animals or humans proved that a grape seed extract may be an efficient source of antioxidants [77][78][79].
Considering their antioxidant and antimicrobial extracts activities, phenolic-rich grape seed extracts may also be used in the food industry as natural additives to prevent microbial growth and lipid oxidation, thereby increasing product quality, safety, and shelf life [80][81].

The curative effects of grape seed oil have been presented in the literature since the 14th century in Spain, when an Arab doctor suggested that Ferdinand IV, King of Castile and Leon in the Iberian Peninsula, use it for the treatment of skin problems. The king decided to protect its composition and named it “royal oil” or “oil of the throne” [2]. Nowadays, recovery of oil from grape (V. vinifera L.) seeds is probably the main application due to the huge amount of seeds produced worldwide and because of the health benefits of grape seed oil intake in our diet, as well as its potential use in other non-food industries.
As there is more than one type of grape, the proportion of oil obtained varies with the type of grape. The proportion of oil varies between 20% obtained from sweet white grape seeds and 6% obtained from some black varieties (Figure 2) [82][83][84][85][86][87][88][89][90][91][92]. 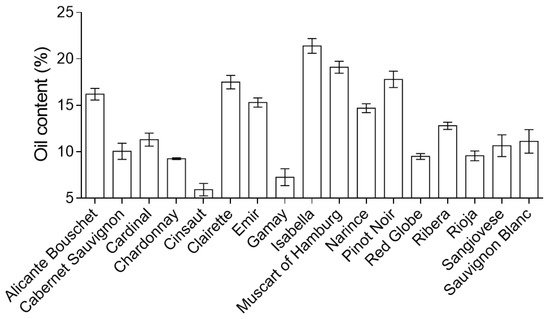