Submitted Successfully!
Thank you for your contribution! You can also upload a video entry related to this topic through the link below:
https://encyclopedia.pub/user/video_add?id=11163
Check Note
2000/2000
Arabidopsis MLO4 Interacts with CaM/CML
Edit
This entry is adapted from 10.3390/ijms22115962

Here, we report the functional characterization of the MLO4 protein in Arabidopsis roots. The MLO4 was identified as interacting with CML12 in a screening for the interaction between the proteins from Arabidopsis MLO and calmodulin/calmodulin-like (CaM/CML) families using yeast two hybrid (Y2H) assays. Then, the interaction between MLO4 and CML12 was further verified by Luciferase Complementation Imaging (LCI) and Bimolecular Fluorescence Complementation (BiFC) assays. Genetic analysis showed that the mlo4, cml12, and mlo4 cml12 mutants displayed similar defects in root gravity response. These results imply that the MLO4 might play an important role in root gravity response through interaction with CML12. Moreover, our results also demonstrated that the interaction between the MLO and CaM/CML families might be conservative.

Mildew resistance locus O (MLO) was first identified as being resistant against powdery mildew (PM) infection in barley [1]. Then, the MLO proteins were found in many plant species. Arabidopsis has at least 15 MLO proteins that diverged into several clades and were involved in different physiological processes, such as sexual reproduction, PM infection, and root thigmomorphogenesis [2][3][4][5]. MLO7/NORTIA (NTA), a downstream component of the receptor-like kinase FERONIA (FER), is involved in pollen tube reception and PM infection [6]. Study showed that its function is dependent on NTA homooligomerization and its carboxyl-terminal tail identity [7]. MLO5/9/15 played roles in pollen tube responses to ovular signals, and MLO5/9 selectively recruit Ca2+ channel CNGC18-containing vesicles to the plasma membrane [8]. The MLO1, MLO2, MLO3, MLO6, MLO8, MLO9, MLO10, and MLO13 are expressed in discrete domains during reproductive development [4]. The MLO2, MLO4, and MLO6 modulate defense responses against PM fungi and a number of other phytopathogens [9]. Furthermore, the MLO2 also function as a negative regulator in plant ROS responses involving biotic and abiotic stress [10]. Mutations in MLO4 and MLO11 exhibit abnormal root thigmomorphogenesis and gravity sensitivity [3][11]. Genetical complementation with MLO4 domains indicate that the C-terminal cytoplasmic domain of MLO4 is necessary for regulation of asymmetrical root growth [11].
All MLO proteins are predicted to share a conserved calmodulin-binding domain (CaMBD) in C-terminal cytoplasmic tail [12][13]. The gel overlay assays demonstrated in vitro Ca2+-dependent binding of CaM to the CaMBD of the MLOs from barley [14]. However, little is known about the interaction of individual MLO with the specific calmodulins (CaMs) or calmodulin-like proteins (CML) in Arabidopsis or other plants.
The Arabidopsis genome encodes 7 CaMs and 50 CMLs, which are presumed to sense and transduce Ca2+ signals [15]. Functional studies of CaM/CML in plants revealed that this protein family converts calcium signals into transcriptional responses, protein phosphorylation, or metabolic changes to regulate plant development responding to the ever-changing environment [16]. Some CaM/CML proteins are involved in plant growth and development, such as AtCaM7 regulating light-induced seedling development [17][18], AtCaM2 functioning in pollen germination [19], AtCML42 for trichome morphogenesis [20], and AtCML23 and AtCML24 in flowering [21][22]. Some CaM/CML proteins are indispensable for plants to respond to abiotic and biotic stress. The mutations in AtCaM3 lead to reduction in thermotolerance of the mutant plants [23]. AtCaM4 negatively regulates freezing tolerance by interacting with CaM-binding protein PATL1 in a CBF-independent manner [24]. A knockout mutant of AtCML9 enhances its tolerance to drought and salinity stress [25]. AtCML20 is a negative regulator in guard cell ABA signaling during drought tolerance [26]. AtCML8 and AtCML9 positively regulate plant immunity in response to Pst inoculation [27]. Less NtCaM13 expression causes more susceptibility to virulent bacteria and fungi in tobacco [28]. Overexpression of pepper CaM1 and AtCML43 confers enhanced resistance to pathogens [29]. All these data suggest that the CaM/CML-mediated defense signaling pathways involve a complex regulatory network.
Both MLO and CaM/CML proteins are important for plants. They have potential to interact with each other in between the two families through CaMBD [12]. However, for now, it is just predicted by physical structure of the proteins, and not solid evidence, to prove their interaction or even their related biological function.

2. The Expression Patterns of MLO and CaM/CML Genes 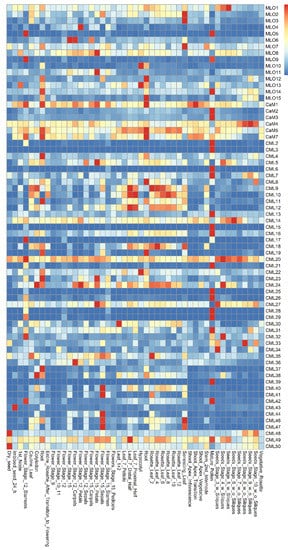 3. Screening for Interactive Pairs of MLO and CaM/CML Proteins

The MLO proteins contain a CaMBD in the C-terminus region [12]. Therefore, the C-terminus regions of the 15 MLO proteins were used to characterize the interaction of MLO and CaM/CML proteins by Y2H. The results showed that each MLO protein may interact with at least one CML protein in yeast cells (Table 1). In particular, the NTA/MLO7, which was involved in pollen tube reception, could interact with up to 11 candidate CML proteins, including CML8-12, CML26, CML30, CML37, CML38, CML40, and CML40. Similar results were also obtained from the assays for the three closely-related proteins MLO4, MLO11, and MLO14, which function in root thigmomorphogenesis [11]. MLO4 interacted with CML12, CML40, and CML44. MLO11 interacted with CML47. MLO14 interacted with CML17, CML18, and CML49.
Table 1. Interactive protein pairs between MLO and CaM/CML family.

At first, MLO4 and CML12 were chosen to verify the results of Y2H screening. Then, the LCI results showed that CML12 interacted with the full length of MLO4 in tobacco cells (Figure 2a). BiFC results demonstrated that the CML12 interacted with the cytoplasmic domain of MLO4, in concert to Y2H result. Furthermore, when the full length of MLO4 was used for the assays, the interactive signal was detected only on the plasma membrane, which was co-localized with the staining signals of the membrane dye FM 4-64 (Figure 2b). This result was consistent to the ones obtained from the membrane localization of MLO4 with a signal peptide and seven transmembrane domains [11].

To understand the relationship between MLO4 and CML12, we further investigated whether MLO4 and CML12 have a co-expression pattern in vivo. First, GUS staining of pCML12::CML12-GUS transgenic lines showed that CML12 was expressed in most of the vegetable tissues, such as seedlings, roots, root hairs, leaves, trichomes, stems, siliques, calyxes, and chalazal end of ovules but not in pollen (Figure 3a–j). In addition, pCML12::CML12-GFP transgenic lines showed that the CML12-GFP fusion protein was detected in the root cap (Figure 3k). Real-time PCR results showed that MLO4 and CML12 shared a similar expression pattern. Both genes were expressed constitutively in many tissues, including seedlings, roots, stems, leaves, inflorescence, and siliques. Expression levels of both genes were closely similar in seedlings. MLO4 was expressed with twice the CML12 expression in roots (Figure 3l). A previous study revealed that the pMLO4::MLO4-GFP was also expressed in the roots, and MLO4-GFP fusion protein was detected in the root epidermal cell [11]. Therefore, both CML12 and MLO4 proteins were expressed in roots, suggesting that they may function coordinately. 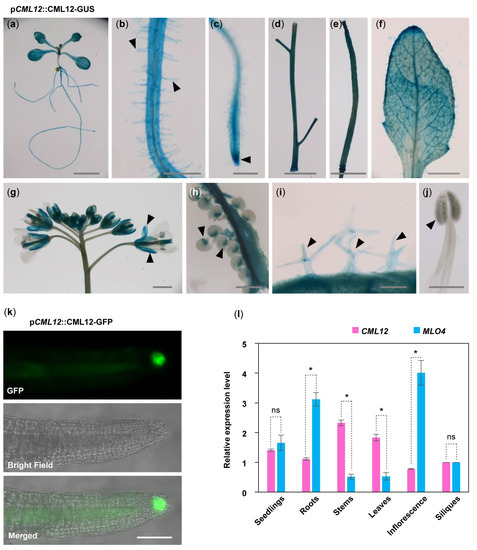 Figure 3. Expression pattern of CML12 Gene. GUS staining of pCML12::CML12-GUS transgenetic lines showed CML12 was expressed in most of the vegetable tissues: Seedling (a), root hairs (b), root tip (c), stems (d), silique (e), leaf (f), sepals (g), chalazal end of ovules (h), and trichomes (i), not in pollen (j), as indicated by pointed triangles in each figure. Bars = 100 μm. (k) pCML12::CML12-GFP transgenetic lines showed CML12-GFP was detected in root cap. Bar = 20 μm. (l) Real-time PCR showed that CML12 and MLO4 genes both were expressed in various tissues of Arabidopsis. ns: not significant; the * above bars indicate the t-test results at significant level of 0.05.

The MLO4 has been characterized as regulating root thigmomorphogenesis, including gravitropism in roots [11]. Previous characterization of cml12 revealed that the mutations in CML12 exhibited a similar phenotype [30]. To study the genetic relationship between MLO4 and CML12, we further characterized their roles in root growth.
The cml12-3 mutant (SALK_122731) was obtained from Dr. Sherryl R. Bisgrove (Department of Biological Sciences, Simon Fraser University, Burnaby, BC, Canada). Real-time PCR showed that cml12-3 was a knock-out mutant, as reported by Gleeson et al. [31]. To test its gravity response, cml12-3 seedlings were vertically grown on the agar minimal medium (0.25% sucrose) for 7 d (16 h light/8 h dark cycle); then, the plates were rotated by 90° in the clockwise direction. The roots bent down in response to gravity change until root tips became parallel with new gravity vector (Figure 4a). Compared to the time (12.60 ± 0.66 h) for the wild-type roots to form a bend, the cml12-3 roots took less time (9.33 ± 0.75 h) to form a bend (Figure 5a), suggesting that cml12-3 roots were more sensitive to gravity response. 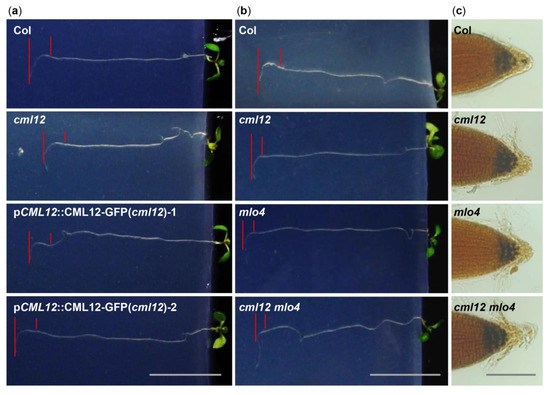 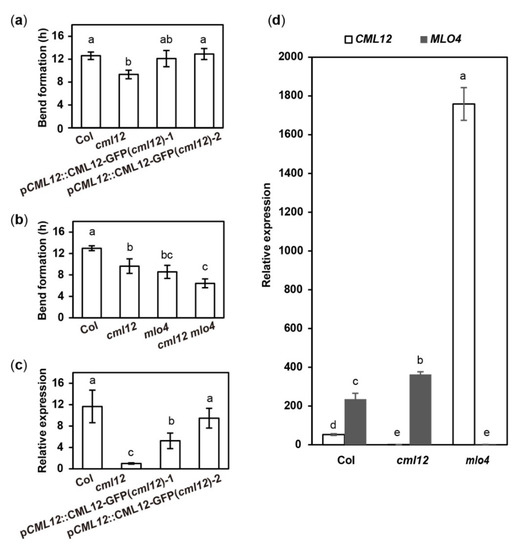 7. Mutation in MLO4 Affected the Expression of CML12

CaM/CMLs bound calcium and were supposed to regulate target proteins downstream [16]. To further study the possible regulatory relationship between CML12 and MLO4, their relative expression levels in each other mutants were analyzed. The real-time PCR assay showed the expression of CML12 was significantly elevated in mlo4-5 mutant, far more than MLO4 expression changing in cml12-3 mutant (Figure 5d). Thus, MLO4 likely modulates the expression of CML12.

More
© Text is available under the terms and conditions of the Creative Commons Attribution (CC BY) license (http://creativecommons.org/licenses/by/4.0/)
Upload a video for this entry
Information
Subjects: Plant Sciences
Contributor MDPI registered users' name will be linked to their SciProfiles pages. To register with us, please refer to https://encyclopedia.pub/register :
Lei Zhu
View Times: 88
Revisions: 2 times (View History)
Update Time: 24 Jun 2021
Table of Contents
1000/1000
Hot Most Recent