Submitted Successfully!
Thank you for your contribution! You can also upload a video entry related to this topic through the link below:
https://encyclopedia.pub/user/video_add?id=11129
Check Note
2000/2000
Ubiquitylation
Edit
Upload a video
This entry is adapted from 10.3390/ijms22116065

Despite advances in medicine, cardiovascular disease remains a significant public health problem associated with high mortality [1][2]. Heart failure (HF) is a major cause of cardiovascular deaths. Maladaptive cardiac remodeling caused by hypertension, ischemic heart disease, and other cardiac diseases is accompanied by complex mechanisms that lead to the development of HF [3][4]. Further studies are needed to prevent maladaptive cardiac remodeling and subsequent heart failure.

The modification of eukaryotic proteins with ubiquitin, named ubiquitylation, controls their lifetimes, abundance, localization, interactions, and activities, thereby regulating protein function at all levels. Thus, ubiquitylation plays a pivotal role in a wide range of cellular processes, such as signal transduction, transcriptional regulation, and maintenance of homeostasis. Failing hearts from patients with dilated cardiomyopathy and those with ischemic heart disease show hyper-ubiquitylation compared to donor hearts [5]. The overall observed change in the ubiquitylation cascade in failing hearts is considered an adaptive response to an increased protein burden derived from increased protein synthesis that accompanies the hypertrophic response or an excess of damaged or modified proteins to be targeted for proteasomal degradation.

In the 2000s, many studies focused on the cardiac ubiquitin E3 ligases to clarify the role of ubiquitylation in the development of cardiac diseases, such as the carboxyl terminus of Hsp70 interacting protein (CHIP), atrogen-1, muscle ring finger (MuRF) family, mouse double mutant 2 homolog (MDM2), cellular inhibitor of apoptosis, casitas b-lineage lymphoma, and E6-associated protein (E6AP) [6][7][8][9][10][11][12][13]. Cardiac ubiquitin E3 ligase plays several roles in protein turnover, energy metabolism, receptor internalization, hypertrophic response, apoptosis, and tolerance to ischemia/reperfusion (I/R) in cardiomyocytes [14][15]. Although elevated expression levels of E6AP were observed in mice after pressure overload [12], the functional role of E6AP has never been examined. Thus, our knowledge of the molecular mechanism of HECT-type E3 ligase in the development of cardiac disease is still lacking.

Ubiquitylation results in the turnover of the ubiquitylated substrate protein by either the proteasome or lysosome, a change in subcellular localization of the substrate protein, or alteration of substrate protein function [20]. Ubiquitylation is mediated by three enzymes and scaffolding proteins: E1, E2, and E3. There are only few E1s and several E2s; however, E3 ligases constitute a large class of proteins with the human genome encoding more than 600 putative E3 ligases and E3 ligase complexes [21][22][23][24]. E3 ligases are also modulators of the rate-limiting step in this enzymatic cascade, participating in substrate protein recognition and catalytic transfer of ubiquitin.

As shown in Figure 1, E3 ligases are classified into three groups: really interesting new genes (RING), homologous to E6AP C-terminus (HECT), and RING-between-RINGs (RBRs). The domain architecture and mechanism of ubiquitylation depend on the class of E3 ligases [25]. 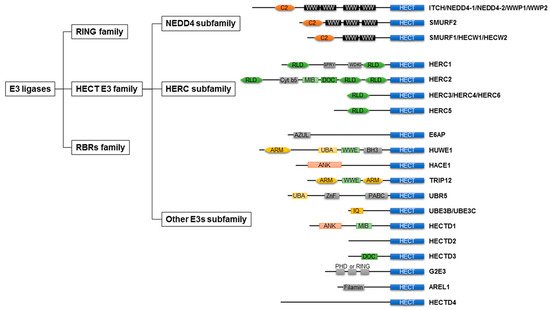 Substrate proteins are modified by a single ubiquitin moiety on one or multiple sites, giving rise to mono- and multi-mono-ubiquitylated proteins, respectively. In addition, a wide variety of polyubiquitin chains can be formed on substrate proteins, in which the ubiquitin moieties can be linked through either one of the seven internal lysine residues (Lys6, Lys11, Lys27, Lys29, Lys33, Lys48, and Lys63) in ubiquitin or through its N-terminal amino group.

Polyubiquitylation through the Lsy48-linked ubiquitin chain is generally used for the ubiquitin–proteasomal degradation pathway. Substrate proteins that receive Lys48-linked polyubiquitin chains migrate to and are degraded by the 26S proteasome. The ubiquitin–proteasome system is a protein quality and quantity control system that mediates approximately 80–90% of intracellular protein degradation under optimal nutritional conditions [26][27][28][29][30]. Furthermore, mono-ubiquitylation of lysine residues or polyubiquitylation through Lys63-linked ubiquitin chains are used for nonproteolytic pathways such as DNA repair, relocalization, modifying activity (signal transcriptional activity), or endocytosis [31][32][33].

E6AP transcribed from the ubiquitin–protein ligase There are 28 types of HECT-type E3 ligases in humans [37], which are commonly grouped into three groups based on the presence of distinct amino acid sequence motifs or domains within the N-terminal: NEDD4 subfamily, HERC subfamily, and other HECT-type E3 ligases [38] (Figure 1). The N-lobe represents the E2 binding domain, whereas the C-lobe contains an active site cysteine to receive ubiquitin. In the HECT family, 16–92% amino acid identity was found for this domain [39].

The NEDD4 subfamily member includes nine types of HECT-type E3 ligases and accounts for approximately 30% of HECT-type E3 ligases [18]. The N-terminal C2 domain is defined as a Ca+ phospholipid binder [40]. The WW domains are responsible for recognizing substrates and have also been found to form intramolecular interactions with the HECT domain of the E3 ligases [41][42]. Some NEDD4 subfamily members are often expressed as alternative splice isoforms [38].

The HERC subfamily is characterized by a HECT domain and one or more regulators of chromosome condensation-like domains (RLDs), an effector protein domain that was first identified as a regulator of chromosome condensation 1 [43]. In humans, the HERC subfamily comprises six members, which can be further organized into two large and four small HERCs. Large HERCs (HERC1 and 2) have two or three RLDs; however, small HERCs (HERCs 3, 4, 5, and 6) have one RLD. RLD has dual functions: one side of the domain acts as a guanine nucleotide exchange factor for the small GTPase Ran, whereas the opposite side interacts with chromatin through histones H2A and H2B [44][45].

3. Importance of Ubiquitylation in Cardiac Disease

Accumulating evidence indicates that ubiquitylation is involved in developing cardiac diseases [13][46][47][48][49][50]. Cardiac proteins are in a dynamic state of continual degradation and resynthesis and are thought to replace all in 30 days under normal circumstances. An experimental study demonstrated that the balance of protein turnover could lead to protein accumulation and aggravation during cardiac remodeling [51]. The discovery that cardiac ubiquitin E3 ligases, such as muscle-specific ubiquitin ligase atrogin-1 and MuRF family, yields cardiac growth, and remodeling through sarcomeric protein turnover, indicated that the ubiquitylation cascade is fundamental to the maintenance of normal cardiac function through protein quality control [13][52][53].

As previously mentioned, ubiquitylation is involved in most aspects of eukaryotic cell biology, such as intracellular signaling, transcriptional control, and regulation of cell death. Research regarding the role of cardiac ubiquitin E3 ligases has developed from protein turnover to cellular processes such as signal transduction, transcriptional regulation, maintenance of homeostasis, mitochondrial dynamics, receptor turnover, and energy metabolism [13][15]. In the following paragraph, we will limit ourselves to a discussion of HECT-type E3 ligases that have been associated with cardiac diseases.

Cardiac fibroblasts are key effector cells in cardiac fibrosis and are responsible for ECM homeostasis in the heart [54]. After cardiac fibroblasts are activated by regulators of tissue fibrosis, such as angiotensin II, connective tissue growth factor, bone morphogenetic protein (BMP), Wnt ligands, cytokines, and TGF- TGF-β1 contributes to cardiac fibrosis development through SMAD-dependent and SMAD-independent pathways. TGF-β1 generally exerts its biological effects by activating downstream mediators, including SMAD2 and SMAD3, while negatively regulated by SMAD7 expression [61][62][63].

SMAD ubiquitin regulatory factor (SMURF) was initially identified as a regulator of SMAD1 stability [78]. SMURFs have been implicated in determining the competence of cells in response to the TGF-β/BMP signaling pathway [79]. SMURF is a multifunctional protein that is involved in cell cycle progression, cell proliferation, differentiation, DNA damage response, and maintenance of genomic stability. SMURF1 plays an important role in heart development, including outflow tract septation and cell-type specification, by controlling cilium-associated BMP signaling [80][81].

BMP-2, as a novel fibrosis-antagonizing cytokine, have a potential beneficial effect in attenuating pressure overload-induced cardiac fibrosis. Wang S et al. demonstrated that SMURF1 interacted with SMAD6 and that this SMURF1/SMAD6 complex was involved in BMP2 antagonization of TGF-β1 mediated protein kinase C-δ and SMAD3 signaling in cardiomyocytes [73]. This finding suggests that SMURF1 may contribute to cardiac fibrosis development.

SMURF2 consists of a C2 domain, three WW domains, and an HECT domain. SMURF2 targets SMADs, heat shock proteins 27, and p53 [82]. SMURF2 was reported to be downregulated in DCM [83]. SMURF functions as a mediator of TGF-β signaling via interaction with SMAD7 containing PY motif during cardiac fibrosis [75].

The protein expression level of SMURF2 in the mouse heart increased, while that of SMAD7 decreased after angiotensin II administration. However, this effect was reversed by the SMAD3 inhibitor, suggesting that the SMAD3 inhibitor protected cardiac SMAD7 from SMURF2-mediated ubiquitin–proteasome degradation. Since SMAD7 functions as an inhibitor of both TGF-β/SMAD and NF-κB signaling, an increase in cardiac SMAD7 could be another mechanism through which SMAD3 inhibitor blocked SMAD3-mediated cardiac fibrosis and NF-κB-driven cardiac inflammation [76]. This finding suggests that SMRUF2 may contribute to the development of cardiac fibrosis.

More
© Text is available under the terms and conditions of the Creative Commons Attribution (CC BY) license (http://creativecommons.org/licenses/by/4.0/)
Upload a video for this entry
Information
Subjects: Cardiac & Cardiovascular Systems
Contributor MDPI registered users' name will be linked to their SciProfiles pages. To register with us, please refer to https://encyclopedia.pub/register :
Yoichiro Otaki
View Times: 60
Revisions: 3 times (View History)
Update Time: 22 Jun 2021
Table of Contents
1000/1000
Hot Most Recent