Submitted Successfully!
Thank you for your contribution! You can also upload a video entry related to this topic through the link below:
https://encyclopedia.pub/user/video_add?id=11060
Check Note
2000/2000
Neutropenic Enterocolitis and Sepsis
Edit
This entry is adapted from 10.3390/medicina57060638

Neutropenic enterocolitis (NE), which in the past was also known as typhlitis or ileocecal syndrome for the segment of the gastrointestinal tract most affected, is a nosological entity that is difficult to diagnose and whose pathogenesis is not fully known to date. Initially described in pediatric patients with leukemic diseases, it has been gradually reported in adults with hematological malignancies and non-hematological conditions, such as leukemia, lymphoma, multiple myeloma, aplastic anemia, and also myelodysplastic syndromes, as well as being associated with other immunosuppressive causes such as AIDS treatment, therapy for solid tumors, and organ transplantation. Therefore, it is associated with high mortality due to the rapid evolution in worse clinical pictures: rapid progression to ischemia, necrosis, hemorrhage, perforation, multisystem organ failure, and sepsis

Neutropenic enterocolitis (NE), as the phrase used to identify it suggests, is a severe inflammatory bowel disease that occurs in neutropenic patients. It is also known as ileocecal syndrome or “typhlitis”, from the Greek word “typhon”, used to indicate caecum or cecitis, since this is the site of the organism most frequently affected; it was a clinical entity initially described in pediatric leukemia patients. However, over the years, the diagnoses of adult subjects with neoplasms have increased (mainly hematological diagnoses, such as leukemia, lymphoma, multiple myeloma, aplastic anemia, and even myelodysplastic syndromes), as well as other immunosuppressive causes such as AIDS, therapy for solid tumors, and organ transplantation. However, since different tracts of the gastrointestinal (GI) system could be involved, it was considered more appropriate to use the definition of neutropenic enterocolitis [1][2][3].
The incidence of NE varies between studies. In a systemic review conducted by Gorschlüter et al., the incidence rate of 21 studies was 5.3% in patients hospitalized for hematologic malignancies, high-dose chemotherapy for solid tumors, or aplastic anemia, while another cohort study found it in 3.5% of 317 severely neutropenic patients [4][5].
The incidence of NE has increased with the increasing use of intensive chemotherapy [1]. Gastrointestinal toxicity, in fact, is a common complication of cytotoxic cancer chemotherapy. Currently available cytotoxic drugs do not discriminate between cancer cells and rapidly dividing normal cells. The toxicity of anticancer treatment will continue to be a significant problem until highly selective therapies for malignant cells are developed [6]. Combination regimens are often the standard treatment. The rapid extension of available antineoplastic drugs, however, has also underscored the urgent need for clinicians to better understand and detect the acute and late toxicity spectrum of these regimens.
In fact, exposure to cytotoxic drugs has been called into question as to the main mechanism in the pathogenesis of NE, although currently it is not yet fully understood. One of the mechanisms is the onset of mucositis with consequent interruption of the mucous barrier, which allows for bacterial translocation from the intestine. This mechanism is supported by histological findings of intestinal wall edema, swollen blood vessels, and mucosal surface rupture [7] with areas of ulceration and bleeding. Neutropenia further aggravates the risks, causing decreased immunity with the inability to control the transmural translocation of pathogens. There are also concerns that direct invasion of the interstitial wall by malignant cells may contribute to the disease. The cecum is more commonly involved in NE due to its distensibility and limited blood supply (elements which, by self-feeding, can in turn cause the clinical condition to worsen).
Therefore, it is associated with high mortality due to the rapid evolution in worse clinical pictures: rapid progression to ischemia, necrosis, hemorrhage, perforation, and multisystem organ failure and sepsis, which is defined as infection-induced organ dysfunction or hypoperfusion abnormalities that predispose to septic shock and increased mortality in neutropenic settings [8]. It is underrecognized clinically, with the diagnosis often being made on post-mortem examination.

The case study involved a 56-year-old woman diagnosed with locally advanced infiltrating ductal carcinoma of the breast treated with chemotherapy according to the TAC scheme (Docetaxel, Doxorubicin, Cyclophosphamide). The blood tests at the beginning of chemotherapy were documented as follows: white blood cells 9630/mm3, of which 4860/mm3 were neutrophils. After 10 days from the start of chemotherapy, the woman in the case in question entered the local emergency department for abdominal pain refractory to medical pain-relieving therapy. Physical examination by the doctors documented the treatable abdomen on all quadrants with tenesmus, vomiting, and diarrhea, with the vital parameters of blood pressure at 110/70, 99% oxygen saturation, and body temperature at 38.0 °C. On laboratory tests, she had 560/mm3 of white blood cells, of which 290/mm3 were neutrophils. CT imaging showed the absence of pneumoperitoneum with a collapsed and thickened rectum, as well as fat stranding and intramural areas of low attenuation. A gastroenterological specialistic examination was also performed, which documented a smooth mucosa on rectal exploration, but with underlying layers there was increased consistency, circumferentially, and the presence of mucus bloody material into the lumen. During the diagnostic process, however, the patient’s condition suddenly worsened, due to the onset of hyperlactacidemic metabolic acidosis, respiratory insufficiency, and a tendency to hypotension despite the massive volume filling and the aggressive life support, and she died. The autopsy examination allowed us to detect, upon isolation of the intestinal tract between the ileocecal valve and the anus, the presence of a focal pattern of circumferential thickening and edema of the rectum-sigma mucosa, in the context of which it was possible to observe the presence of small yellow membranes. Upon cutting of the bowel wall, diffuse submucosal hemorrhages were also noted. The histological investigations (Figure 1) conducted on the organ samples allowed us to confirm the presence of mucosal and submucosal edema, and well-defined agglomerations of inflammatory cells in the context of the bowel wall as well as Councilman bodies were observed in the study of the liver in association with biliary stasis. The histological study was completed with immunohistochemical staining with positive anti-TNF-alpha and anti-IL15 antibody reactions on the heart samples [9][10]. The cause of death was attributed to sepsis and multi-organ failure. 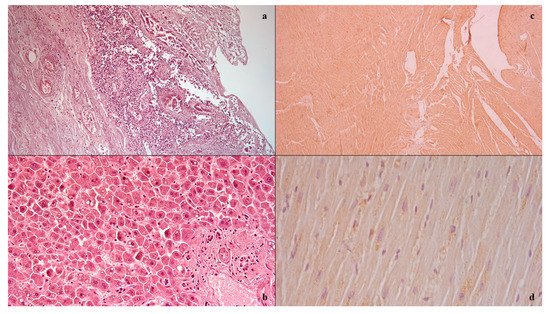 Figure 1. Histological investigation: mucosal and submucosal edema, and well-defined agglomerations of inflammatory cells in the context of the bowel wall (a); Councilman bodies of the liver (b); positive anti-IL15 (c) anti-TNF-alpha (d) antibody reactions on heart samples.

3. Side Effects of Chemotherapy

Chemotherapy drugs can cause damage to the wall of the various tracts of the gastrointestinal (GI) system, according to multiple mechanisms. On the one hand, in fact, the damage can be mediated by a direct effect on the mucosa that can lead to inflammation, edema, ulceration, and atrophy of the same. On the other hand, these alterations cause, consequently, increased permeability of the mucosa which, in association with the immunosuppressive effect of the drugs themselves, predispose to an increased risk of transparietal infections, resulting in septicemia and shock, with consequent mucosal ischemia. This would trigger a self-sufficient vicious circle [11][12].
Among the drugs most implicated in mucosal damage, taxanes, which act by stabilizing microtubules and inhibiting cellular mitosis [13], have been linked to a broad spectrum of colitis. Specifically, it was difficult to compare the effects induced by docetaxel and paclitaxel in terms of toxicity, although docetaxel appears to be associated with more side effects than paclitaxel. The most frequent type of illness induced is ischemic colitis, clinically characterized by acute abdominal pain and associated neutropenia, fever, and/or diarrhea, with or without blood. This condition can develop into serious complications such as intestinal necrosis, colonic perforation, or typhlitis. Septicemia occurs frequently and the most common etiopathology is aerobic Gram-negative bacteria infection. The mucosal histopathological analysis is compatible with a significant component of inflammatory changes such as mucosal and submucosal edema, hemorrhage, acute inflammatory infiltrates, and mucosal ulcerations [14].
Platinum compounds follow, the best known of which is cisplatin. It works by binding inside cells to nucleophiles, such as DNA, RNA, and bases, to form adducts, which induce apoptosis [15]. Vomiting is the earliest GI symptom and is usually associated with a peak in the urinary metabolites of serotonin, suggesting a strong correlation between the release of serotonin with this agent and vomiting [16]. Oxaliplatin, on the other hand, has a large number of GI side effects: diarrhea and nausea, vomiting, stomatitis, dry mouth, melaena, bleeding, proctitis, and tenesmus.
Furthermore, doxorubicin is a drug belonging to the category of DNA intercalators, and it acts mainly by inhibiting DNA topoisomerase II and DNA replication through epigenetic mechanisms of DNA methylation [17]. Stomatitis has been reported in up to 80% of patients, in other cases, ulceration of the esophagus and colon has been described following its use.
On the other hand, 5-fluorouracil (5-FU) and methotrexate belong to the category of antimetabolites, i.e., analogs of folic acid, pyrimidine, or purines that induce cell death during the phase following incorporation into RNA and in DNA, thus inhibiting the synthesis of nucleic acid [18][19]. 5-FU, in detail, causes gastrointestinal side effects that can be serious and life threatening. Stomatitis and esophagopharyngitis are commonly observed during therapy, with ulceration and necrosis of the visceral wall. In fact, subsequent diarrhea can be bloody. Methotrexate, on the other hand, has a severe toxicity profile manifesting in myelosuppression, oropharyngeal ulceration, and diarrhea. Other frequently reported gastrointestinal side effects include stomatitis, hematemesis, melaena, and other types of bleeding. Extremely rare cases of toxic megacolon have been associated with the use of methotrexate.