Submitted Successfully!
Thank you for your contribution! You can also upload a video entry related to this topic through the link below:
https://encyclopedia.pub/user/video_add?id=10959
Check Note
2000/2000
Salvadora persica
Edit
Upload a video
This entry is adapted from 10.3390/antiox10050712

SP, frequently known also as Miswak, is a member of the plant family Salvadoracea [1]. It is mainly distributed in dry and subtropical regions of Africa and the Middle East, as well as the Indian subcontinent [2]. The fresh leaves, twigs and roots of its small tree can be added to the daily diet and are applied in traditional herbal therapy for asthma, scurvy, cough, rheumatic illnesses, oral hygiene and other conditions [1][3]. The use of SP originates in the Pre-Islamic and Islamic era, as it was introduced by Arabic and Islamic societies as a predecessor of toothbrushes to clean the teeth and promote a good oral hygiene [4]. The advantageous properties of SP regarding dental and oral health can be explained by its mechanical action if used for brushing in addition to its pharmacologic active constituents. These encompass chemically active substances as tannins that inhibit glucosyltransferase enzyme to diminish plaque and periodontal diseases, and resins that protect against dental caries [5] Moreover, the antimicrobial, anti-inflammatory and antioxidant activities of SP have been ascribed to several detectable substances in its natural extracts such as potassium and sodium chloride, as well as Salvadorine, vitamin C, Salvadourea, silica, Saponins and different minerals [5][6].
Diseases of the periodontal structures have besieged humans worldwide since early history. Paleo-pathological studies have explained that periodontal induced bone loss has impacted early populations in different regions worldwide [7]. Gingivitis is considered the first stage of periodontal disease and inflammation and initiates in the gingiva due to accumulated plaque and microorganisms between the gingival line and teeth. This responsive disease is revocable through an improved oral hygiene. In periodontitis the illness further progresses into an irreversible and chronic inflammatory condition finally leading to bone resorption. During this pathophysiological multifactorial process the host immune response and the invading bacteria provoke the periodontal destruction via losing bony attachments, subsequently promoting loss of alveolar bone at the affected sites [8]. Non-surgical periodontal treatment can show therapeutic effects in mild to moderate periodontal disease, whereas surgical periodontal therapy is needed in progressive disease conditions [7]. Supplementary to mechanical debridement in periodontal treatment, various drug delivery methods, mouth rinses, irrigating solutions, and long-term drug release systems are commonly used for therapeutic agent administration [7][9]. Furthermore, routine periodontal therapy combined with an adjunctive therapeutic mediator has been shown to greatly improve patient outcomes as compared to mechanical debridement only [7][10]. Modern chemotherapeutic agents showed impressive efficacy in the treatment of periodontal disease, but they also had a variety of intolerable side effects, including strong taste changes, tongue and tooth discoloration, unwanted antibacterial resistance, and higher product prices [11][12].

2. Salvadora persica as a Therapeutic Agent

SP is a well-established cultural and religious-based herbal therapy for a variety of health conditions that has been identified in various parts of the world [13][14]. SP, a plant native to dry areas of Africa and the Middle East, as well as being widely cultivated in regions across the Indian Peninsula, became a common herbal medicine during various historical periods [4].
The precise origin of mechanical tooth brushing tools is uncertain. However, before the advent of the modern toothbrush, civilized nations used various kinds of brushing devices to clean and protect their teeth. The toothpick and twig brush were among the first instruments invented. [4][15]. Toothpicks have been used since ancient times. They were discovered alongside other toiletry products in Ur, an ancient Babylonian city that flourished around 3500 BC. The Greek sophist Alciphron advocated using a toothpick to clean the “fibrous debris” that stood between the teeth during meals in the second century BC [4]. The Babylonian fiber brush, also known as the chewing stick, was used as early as 3500 BC and may have been the historical forerunner of the modern toothbrush. It was a wooden stick about 5 or 6 inches long. One end was macerated to separate the fibers to produce a brush-like end. With approximately 182 plant species potentially providing chewing sticks, SP was traditionally the most widely used one for this activity [16]. Prior to the arrival of Islam, Arabs extracted chewing sticks from the root of the SP tree and used them as a herbal therapy for oral and dental hygiene [4]. Later, during the early Islamic period, the use of Miswak became part of a refined way of life. Its use as a simple oral hygiene method became absorbed into Islamic religious practice and was a constant Prophetic practice in all daily activities. Since then, the Miswak has played an important role in Islamic hygienic jurisprudence, with Muslim scholars emphasizing its importance in many Prophetic narratives [4]. As a result, Islam had a major influence on the spread and usage of SP chewing sticks in the world [17]. Today, both the traditional SP stick and the modern toothbrush are used in conjunction around the world, most notably in Muslim countries [4][17].
In recent years, numerous studies have begun to examine the therapeutic properties of SP and its bioactive constituents in a variety of medical fields, as well as the possible roles it could play in the future as part of clinical therapies or disease prevention measures [16][18][19].

Salvadora persica, is plant species of the Salvadoraceae family. Its complete classification can be found in (Table 1).
Table 1. Systematic classification of Salvadora persica.
SP is an upright evergreen plant with a crooked trunk that grows as a small tree or shrub. It is also known as Arak or “tooth brush tree.” It seldom grows larger than one foot in diameter and can reach a height of around three meters. The leaves are thick, small, rounded to ovate, and smell strongly of cress or mustard. The fragrant flowers are very small. The fruits, which resemble fleshy berries, are tiny and scarcely visible. They are edible both fresh and dried. The plant can live in harsh conditions and can tolerate soils ranging from intensely dry to highly saline [4]. The SP tree is widely spread in Africa, the Arabian desert, and the Indian Peninsula due to its ability to withstand a variety of conditions [4]. 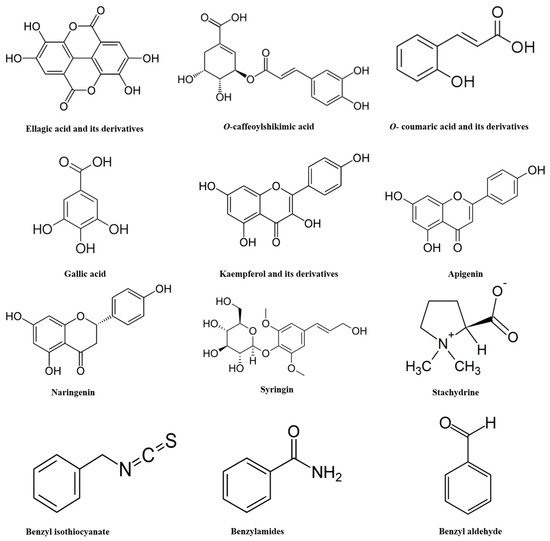 Several studies have investigated potential acute and sub-chronic toxicities of SP and its extracts on in vivo and in vitro levels (Table 3).
Table 3. The potential Salvadora persica related toxicity and its reported effects.
Safety profile of aqueous alcoholic extracts of SP roots was evaluated in vivo in a rat study model [27]. Rats were administered with up to 5 g/kg of the SP intraperitoneally and acute toxicity was checked. No visible sign of toxicity and mortality were seen till 7 days with 3 g/kg of the extract and LD50 was found to be 4 g/kg. Extracts of SP root were found safe for liver and kidney as depicted by biochemical and hematological parameters at a dose of 400 mg/kg body weight. However, extracts demonstrated negative effect on sexual hormones by reducing testosterone and increasing estrogen secretion in male rats whereas progesterone levels were decreased in the female rat group. In another study on human dental pulp stem cells [29] it was found that aqueous extracts of SP demonstrated a cytotoxic effect at a concentration of 5.75 mg/mL and caused significant cell proliferation at 0.08 mg/mL and 0.17 mg/mL after 48 h whereas alcoholic extracts (5.75–1.43 mg/mL) showed toxicity after 28 and 48 h. Furthermore, another in vitro investigation examined the effect of SP extract on human gingival fibroblasts [30]. Hexane extract (1 mg/mL) of SP showed cytotoxicity in 14% of the cells using lactic dehydrogenase assay while crystal violet assay showed toxicity in 12% of cells. Maximum cytotoxicity was reported in the ethyl acetate extract of SP as cell survival was only 40% and 66% when evaluated by lactate dehydrogenase and crystal violet assay respectively. In an oral acute toxicity test within an animal investigation, SP at a concentration of 300 and 500 mg/kg was found to be safe up to 5 g/kg of animal weight and reported no side effects of the drug administration [31].
Generally, it could be stated that SP extracts are mostly safe compounds which have an old history of human remedial practice with no significant safety issues. Nevertheless, to achieve the worldwide regulatory standards of drug safety and to determine the exact safe concentrations that should not be exceeded it is vital to perform more safety studies in the future to establish complete guidelines for these compounds and their application by different routes of administration in clinical therapy.

More
© Text is available under the terms and conditions of the Creative Commons Attribution (CC BY) license (http://creativecommons.org/licenses/by/4.0/)
Upload a video for this entry
Information
Subjects: Biology
Contributor MDPI registered users' name will be linked to their SciProfiles pages. To register with us, please refer to https://encyclopedia.pub/register :
Mohamed Mekhemar
View Times: 122
Revisions: 2 times (View History)
Update Time: 17 Jun 2021
Table of Contents
1000/1000
Hot Most Recent