Submitted Successfully!
Thank you for your contribution! You can also upload a video entry related to this topic through the link below:
https://encyclopedia.pub/user/video_add?id=10867
Check Note
2000/2000
Hydrogen Economy
Edit
This entry is adapted from 10.3390/en14113193

Environmental issues make the quest for better and cleaner energy sources a priority. Worldwide, researchers and companies are continuously working on this matter, taking one of two approaches: either finding new energy sources or improving the efficiency of existing ones. Hydrogen is a well-known energy carrier due to its high energy content, but a somewhat elusive one for being a gas with low molecular weight. The so-called "Hydrogen Economy" is based on the use of hydrogen as an energy source. This entry examines the current electrolysis processes for obtaining hydrogen, with an emphasis on alkaline water electrolysis.

Nowadays, energy is at the top of everybody’s needs and concerns. Never before has the consumption of energy been so high, and never before has the impact of the use of that energy been as intense and negative on the planet as a whole.
Growing energy demand due to population increase poses a serious threat to the global economy, environment, and consequent climate change [1]. Currently, fossil fuels are the principal resources used to obtain energy. However, these sources are non-renewable, and they have been exploited on such a large scale for the past 200 years that their reserves are due to run out: in 50 to 60 years for oil and gas, and 150 to 200 years for coal, according to recent forecasts [2]. Furthermore, the pollution resulting from the consumption of fossil fuels is a major issue that must be taken into consideration. Consequently, renewable energy resources, such as solar energy, wind, or wave power, have attracted considerable attention as an alternative response to increasing energy demand, without causing a major environmental impact. Besides cost issues, there are, however, some technical problems, related to energy fluctuations produced by renewable sources that lead to low energy delivery efficiencies and thereby limit their large-scale applications. To take advantage of all the energy produced from these sources, it is crucial to find a solution to storing the energy produced in excess when there is a peak of production, and to make it available to be consumed at a time when consumption exceeds production [3].
Hydrogen is seen as a key component to overcome this issue due to its high energy yield, high gravimetric energy density, relatively high abundance on earth, and zero emissions during consumption. Being an energy carrier, it is as clean as the method employed in its production, so producing hydrogen by splitting water using electricity generated from renewable sources has many advantages. Its use not only benefits from the abundance of water resources but also the zero pollutant emissions generated. In addition, the hydrogen obtained has a high level of purity of 99.99% [4][5]. However, only 4% of the total hydrogen currently produced comes from the electrolysis of water. Most hydrogen produced comes from fossil fuels, specifically from the steam reforming of natural gas (48%) followed by oil and coal gasification (30% and 18%, respectively) [6]. This is because the hydrogen produced from the electrolysis of water must compete with the relatively low prices of the hydrogen produced from fossil fuel-based techniques. Nevertheless, hydrogen is seen as a promising approach to compete with fossil fuels and to end the planet’s energy dependency on them, so that it has become an item on the political agenda. For instance, the European Commission launched its Clean Hydrogen Alliance in July 2020 to seek the commitment of European Union countries to large-scale hydrogen production. The aim is for this production to be attained via electrolysis but, given that this process is still very expensive, production from natural gas is also allowed. Thus, large efforts are being put towards increasing the efficiency of electrolysis.

In the electrolysis of water, a direct current (DC) is applied and electrons flow from the negative terminal of the DC source to the cathode. There, the electrons are consumed by hydrogen ions existing in the water, and hydrogen gas is formed. To keep the charge balance in the cell, the hydroxide ions resulting from the cathodic reaction move towards the anode surface, where they lose electrons (that return to the positive terminal of the DC source) and oxygen is formed [7][8]. The overall reaction of water electrolysis is represented by Equation (1).

Figure 1. Schematic representation of (a) an AWE cell, (b) a PEM electrolysis cell, and (c) a SOEC. Reprinted from [9] with permission from Elsevier.
AWE is the oldest and most well-established technique. The cell consists of an anode and a cathode immersed in an alkaline solution, separated by a diaphragm. The hydrogen evolution reaction (HER) at the cathode and the oxygen evolution reaction (OER) at the anode are represented by Equations (2) and (3), respectively [7][8].

PEM electrolysis is a less mature technique than AWE. PEM electrolysis cells are similar to AWE cells, but instead of an alkaline aqueous electrolyte, they have a solid polymer electrolyte membrane with an acidic nature. The membrane, along with the electrodes, forms what is called the membrane electrode assembly (MEA). In this case, the two characteristic half-reactions for HER and OER are given by Equations (4) and (5), respectively [10][11].

As an alternative to PEM electrolysis, recent studies focused on the use of anion-exchange membranes (AEMs) for the development of a new technology known as AEM water electrolysis. These devices have a structure similar to PEM electrolyzers, but the membrane is selective to the transport of anions, OH−, instead of protons, H+. AEM water electrolyzers can either be fed by pure water, concentrated KOH solution, or diluted K2CO3 solution. The electrode reactions are the same as those shown for AWE (Equations (2) and (3)) [12].
SOEC is the least developed electrolysis technology, and it is not yet available for commercialization. What distinguishes this technique from the other two, is that it is performed at much higher temperatures, as can be seen in Table 1, where the main features of the three processes are compared. A SOEC performs the electrolysis of water vapor at high temperatures, resulting in higher efficiencies compared to the other techniques. The reactions occurring at the cathode and the anode are given by Equations (6) and (7), respectively [10][13].

Table 1. Main specifications of the different electrolysis technologies. Adapted from [3][9] with permission from Elsevier.

AWE, PEM electrolysis, and SOEC technologies are at different stages of commercialization. As mentioned, the SOEC is still being developed at a laboratory scale, so it will not be the focus of this review. The more mature AWE and PEM technologies have already reached the commercialization stage. AWE electrolyzers, being around the longest, are sold in greater numbers despite some superior characteristics offered by PEM. As can be seen in Table 1, PEM electrolyzers provide hydrogen with higher purity and can reach higher current densities than AWE without compromising efficiency [10] due to the tightly packed structure of the MEA and because the thinner membrane provides higher proton conductivity [11][15]. They also have a greater operating range [3]. Furthermore, when compared to AWE, PEM technologies have higher associated costs and have a shorter stack and system lifetime [8][15]. The polymer electrolyte membrane is made from an expensive material and has short durability, which implies constant replacement. The short durability of the PEM is mostly attributed to membrane contamination or chemical self-degradation and deterioration of the anode materials. While in AWE, non-noble metals, such as nickel (Ni), are suitable electrocatalysts for HER and OER, in PEM electrolysis, the acidic character of the electrolyte implies the use of precious metals as electrocatalysts for the reactions to occur, which increases the investment [16].
Over the years, several authors have compared both technologies. Schalenbach et al. [17] compared an AWE electrolyzer using Ni-based catalysts and a thinner separator with a PEM electrolyzer using iridium (Ir) and platinum (Pt)-based catalysts and a Nafion membrane. They concluded that the AWE with a separator thinner than normally used can achieve an efficiency greater than PEM electrolysis.
Felgenhauer et al. [18] presented a comparison between sixteen different models developed by different companies and analyzed AWE and PEM technologies regarding the economic aspects of scale, production capacity, and all costs related to the production of H2. They conclude that, among the 16 electrolyzers, PEM had a slight advantage in terms of efficiency, 57–64%LHV in comparison to AW electrolyzers, 52–62%LHV, but suffer from higher efficiency degradation. They also found an increase in the cost-efficiency of the systems with the increase in system capacity, which indicates that scale economies are applied. Therefore, AWE systems are currently mature and cost-efficient solutions. The lower costs associated with this technology compensate for the slightly better efficiency of PEM.

The decomposition of water into hydrogen and oxygen is not thermodynamically favorable. To accomplish it, a potential difference between the anode and cathode must be applied, called the equilibrium or reversible cell potential (Eecell). Under standard conditions (ambient temperature of 25 °C and atmospheric pressure) the ΔHcell is 286 kJ mol−1 of H2 and the ΔGcell is 238 kJ mol−1 of H2. The difference between the two values arises because the electrolysis leads to a change from the liquid to the gaseous phase and hence to a large increase in the entropy of the system. The Eecell value at these conditions is −1.23 V (−ΔGcell/nF). At this cell voltage, the water-splitting reaction is endothermic.
When the system is isolated, the entropy increase of the system cannot be achieved by absorption of heat from the surroundings, so all the energy has to come from an electrical source, which means that it is necessary to apply a higher potential difference. The total electrical energy required to maintain an electrochemical reaction without generation or absorption of heat, at a specific temperature, is called the thermoneutral voltage, Etn, which is, at standard conditions, 1.48 V (ΔHcell/nF). Although Eecell is the theoretical minimum cell voltage required to dissociate water molecules by electrolysis, Etn corresponds to the actual minimum voltage for the electrolysis cell to operate in adiabatic conditions, i.e., with a net zero heat balance between the thermal energy transferred to the cell and produced by the cell. Above Etn, the reaction becomes exothermic, and heat is generated. This means that, in practice, all water electrolyzers must operate above the Etn [7][8][19].
When operating at non-standard conditions, the cell potential must be calculated from the Nernst equation, Equation (8) for the two electrode reactions,

where a are the activities of the reactant and products and R is the universal gas constant [8][19].
Apart from the theoretical energy consumption during electrolysis, several additional electrical barriers need to be overcome for the electrolysis process to occur. All these barriers contribute to the required cell voltage of the electrolysis (Figure 2) and constitute the overpotential, which is defined as the difference between the theoretical cell potential (i.e., the equilibrium cell potential, Eecell) and the actual cell potential that is necessary to drive the reaction at the desired rate, Ecell (Equation (9)) [15][20]. 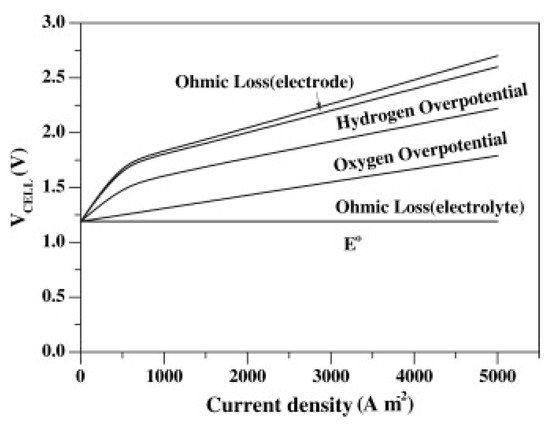 Ohmic overpotential is related to the ohmic internal resistance, R, of the cell, which combines the resistances of the electrode, the electrolyte solution, the diaphragm, the connection wires, and those induced by hydrogen and oxygen bubbles. This means that the overpotential arises from the ionic resistance of the solution (related to its conductivity) and from the electronic resistances to and from the cell or stack components. Ohmic overpotential, as its name suggests, follows Ohm’s law (ηo = iR, where i is the applied current). This relation indicates that the ohmic drop varies linearly with the applied current [21][22].

where α is the anodic or cathodic transfer coefficient that represents the fraction of overpotential that lowers the kinetic barrier for the reaction at the electrode/electrolyte interface and j0 is the exchange current density, which is defined as the rate at which the reactants are transformed into products at equilibrium and the products are regenerated as reactants, free of any limitation due to mass transfer [8].