Submitted Successfully!
Thank you for your contribution! You can also upload a video entry related to this topic through the link below:
https://encyclopedia.pub/user/video_add?id=10848
Check Note
2000/2000
Agri-Food Contexts in Mediterranean Regions
Edit
Upload a video
This entry is adapted from 10.3390/su13126683

The agri-food frameworks have specific characteristics (production units with small dimensions and in great number with implications in the respective markets) that call for adjusted approaches, even more so when they are considered in Mediterranean contexts (where global warming will have relevant impacts). In fact, the Mediterranean regions and countries have particular specificities (due to their climate conditions) that distinguish them from their neighbours. This is particularly true in Europe, for example, where the southern countries present socioeconomic dynamics (associated with the respective public debt) that are different from those identified in the northern regions.

The several dimensions (economic, social, and environmental) of agri-food systems are interrelated with other domains, such as those associated with chains and territory, where, for example, the heritage, socioeconomic dynamics, and natural assets have their importance [1].

On the other hand, agri-food contexts, due to their specificities, are often subject to several public interventions, namely through agricultural policies. This is particularly relevant in European Union (EU) countries, due to the different processes of enlargement and the consequent diversity of realities amongst member-states and regions [2].

In association with agricultural policies, institutions appear. Amongst the agri-food organisations, cooperatives appear with a determinant contribution to support in overcoming the particularities of the sector [3]. The cooperatives are crucial to technically support the agri-food stakeholders and help them to concentrate and add value to farm production.

Other approaches to dealing with the characteristics of the sector are the alternative agri-food networks that have appeared over the last decades, across several countries, as an interesting substitute for the traditional normalised systems towards more sustainable and healthy food markets [4].

In addition to its internal particularities, the agri-food sector always deserves special attention because of its environmental externalities and contributions to global warming [5]. In fact, the impacts on the environment from farming activities are having a real influence on the air, soil, and water quality. Achieving a sustainable and healthy agri-food sector seems to be a concern for several stakeholders [6], as well as the interrelationships of this sustainability with rural development [7].

For this purpose, 100 and 117 articles (excluding conference papers, book chapters, and books) were obtained from the Web of Science Core Collection [8] and Scopus [9], respectively, in a search carried out on 26 December 2020, without any restriction for the publication year. This expression allows for the consideration of documents for the several forms considered by the researchers to express the agricultural and food systems, such as agri-food, agro-food, etc. This expression appears, in general, more frequently than agro-food in WoS and Scopus; nonetheless, specifically for the Mediterranean topic, there are no great differences. To aid in the organisation of the literature review in subsections, a previous bibliometric analysis was carried out with the VOSviewer software [10][11], considering keywords and terms as items.

The bibliometric analysis is a relevant support to better structure the literature review [12] and provide interesting findings to better understand the scientific trends [13]. In turn, systematic literature reviews are adjusted approaches to assess the state-of-art of the research associated with the topics addressed [14]. In addition, the agri-chains need to deal with new challenges [15] in the coming future [16].

This research follows the approach described before; nonetheless, there are other methodologies followed by other studies, such as, for instance, Sharma et al. In this study, an MB2MBA2 (Methodology Based on Benchmarking of Metadata, from scientific databases, and Bibliometric Assessment and Analysis) approach with the following phases is suggested (following, for example, Martinho [12] and Kent Baker et al. [17]):-Selection of the more adjusted scientific databases to work upon, considering the topics to be addressed;-Removing the duplicated documents and the not relevant ones;-Assessment of the information obtained from the database(s) selected to identify better methods to be considered in the bibliometric analysis;-Survey, through a literature review of the total documents or, in case of a great number of studies, the most representative ones as a sample of the total results obtained in the search.

Figure 1 and Table 1, obtained through the VOSviewer software [11] with bibliographic data, consider co-occurrence as links and keywords as items. In the co-occurrence links, the relatedness of the keywords is based on the number of documents in which they appear together [10]. To obtain this figure and this table, 1 was considered the minimum number of occurrences (number of documents in which a keyword appears) of a keyword [10]. In this figure, the size of each circle associated with each keyword represents the number of occurrences, and the distance between each item (keyword) is related to the level of relatedness. 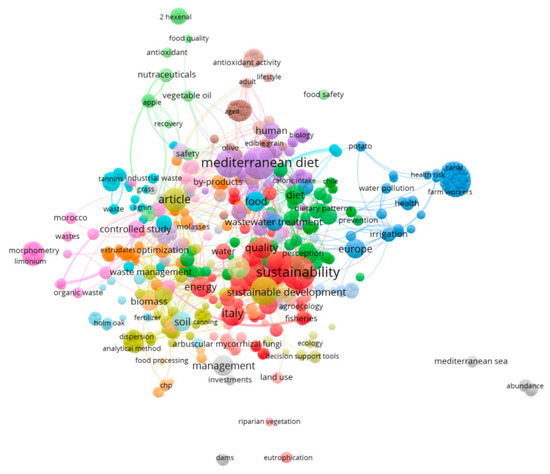 Specifically, in Table 1, it is possible to identify five great clusters, in terms of diversity of keywords, among the top 50 documents having more occurrences. Cluster 1 displays keywords related to sustainability, where Italy and Spain appear with high occurrences and a recent average publication year, showing that they are current topics. Cluster 2 appears with keywords associated with diet and consumption, Cluster 3 with items such as Europe and waste, Cluster 4 with agriculture, and Cluster 5 with Mediterranean productions, such as olives and fruit. 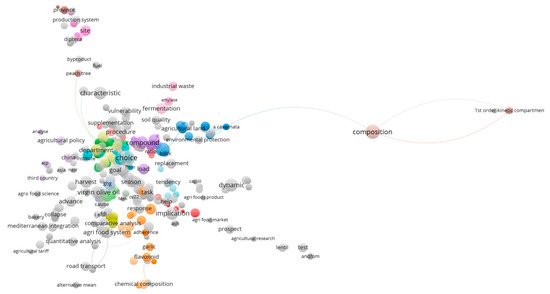 In this case, Figure 2 and Table 2 also show the importance of sustainability and agriculture in the agri-food systems; nonetheless, they further highlight the relevance of the agri-chains’ behaviours, namely in terms of food choice and consumption, food production and composition, and the associated dynamics. After exploring Table 2 in greater depth, it is evident that there are some larger clusters that deserve further analysis. For example, Cluster 3 highlights the importance of food production and agriculture, Cluster 5 shows the interrelationships between food production and biodegradability, Cluster 13 shows the role of the University and research for agri-food systems, and Cluster 46 reveals the interrelationships between food production and heritage.

Considering the information highlighted here and following, for example, Martinho [12][18][19], who carried out an organised literature review based on previous bibliometric analysis, the literature review will be carried out for the following subtopics: agri-food dynamics and sustainability; agriculture and agri-food systems; agri-chains and food consumption; food production and composition impact on agri-chains.

4. Main Insights from the Literature Review and Discussions

The main insights are presented in Table 3 and reveal the importance of an adjusted management of the by-products as a way to reduce the environmental impacts and find innovative and alternative uses from the perspective of circular economy. Innovative approaches to deal with the increased carbon footprint and that allow improvements in sustainability are determinants for a more balanced development.

In these contexts, the agricultural policies and institutions may bring relevant contributions and play a relevant role, namely to promote interrelationships between the agricultural and forestry sectors in a more integrated rural development. This is a great task considering the diversity of realities in the Mediterranean framework.

The Mediterranean Diet as food label and lifestyle and Euro-Mediterranean integration are good signs for a deeper cooperation between the Mediterranean countries with advantages for the respective agri-food sectors and contexts.