Submitted Successfully!
Thank you for your contribution! You can also upload a video entry related to this topic through the link below:
https://encyclopedia.pub/user/video_add?id=10840
Check Note
2000/2000
Autophagy Modulators in Cancer Therapy
Edit
Upload a video
This entry is adapted from 10.3390/ijms22115804

Autophagy is a process of self-degradation that plays an important role in removing damaged proteins, organelles or cellular fragments from the cell.

Autophagy, directly translated as ‘self-eating’, is an evolutionary conservative process, found in all eukaryotic cells—from single-cell yeasts to much more complex multicellular mammalian organisms [1]. The introduction of the term ‘autophagy’ was proposed in February 1963 during the conference titled ‘Ciba Foundation Symposium on Lysosomes’ which took place in London [2]. This process participates in intracellular degradation of damaged or redundant proteins with a long half-life as well as other unnecessary cytoplasm components [3][4]. Autophagy provides an organism’s homeostasis and prevent it from redundant components accumulation inside the cell [5].
Moreover, this process is involved in surfactant formation or red blood cells ripening [3]. Following the Nomenclature Committee on Cell Death, in 2018 the term ‘autophagy-dependent cell death (ADCD)’ was introduced. ADCD is a type of regulated cell death in which functional autophagic markers such as increased degradation of autophagosomal substrates or LC3 (Light Chain protein 3) lipidization occurs [6]. Interestingly, unlike necrosis or apoptosis, autophagy-dependent cell death is not synonymous exclusively with cell death. Under stressful condition such as hypoxia, nutrient deficiency or chemotherapy, this process can become the strategy for cell survival [5]. ADCD occurs in all eukaryotic cells performing important functions, for example, it is an adaptation mechanism to stressful conditions, as it provides cells with a constant supply of nutrients essential for sustaining key life processes. Additionally, through the elimination of redundant cytoplasm components and the adjustment of the endoplasmic reticulum size, ADCD participates in maintaining the intracellular homeostasis. Furthermore, ADCD is involved in tissue-specific processes, such as erythrocyte ripening or intracellular surfactant formation [3] and also protects the organism from viruses or bacteria multiplication [7][8].
Autophagy-dependent cell death, through its selective and non-selective mechanisms of degradation of pathogens, organelles and various biomolecules (nucleic acids, lipids, carbohydrates and proteins) constitutes the main catabolic system of eukaryotic cells [9][10]. As one of the key elements in maintaining cell homeostasis and health, this process also plays an important role in tumor suppression or genome integrity [11]. 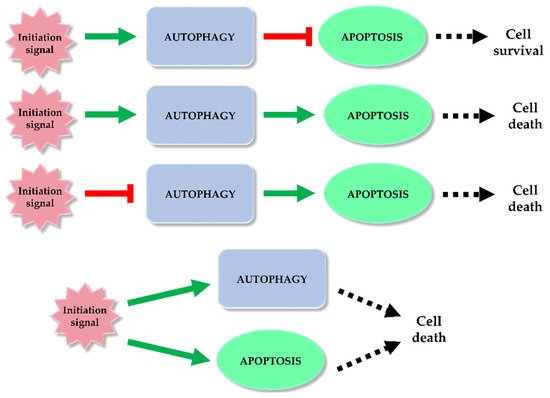 p53, a protein which binds specific DNA sequences, is involved in many cellular processes including repair of damaged DNA and induction of apoptosis. Due to its ability to regulate the cell cycle, p53 is called the guardian of the genome [15]. Activation of this factor can occur, for example, as a result of DNA damage, hypoxia, or nutritional stress [16][17][18]. p53 can affect both the extrinsic and intrinsic pathway of apoptosis. DNA damage causes mitochondrial translocation of p53. The protein promotes cytoplasmically localized Fas and TRAIL receptors, leading to induction of the extrinsic apoptotic pathway [19][20]. However, in the cell nucleus, p53 promotes many proapoptotic proteins, such as Bid, PUMA or Bax. In addition, it leads to inhibition of Bcl-2 expression, and both of these actions trigger the intrinsic apoptosis pathway [20].
The p53 protein is also involved in the regulation of autophagy. Based on their study, Crighton and co-authors found that genotoxic stress results in transcriptional activation of DRAM (Damage-Regulated Autophagy Modulator), a direct target gene of p53, which causes induction of autophagy. The DRAM signaling cascade promotes the fusion of autophagosomes and lysosomes, resulting in the formation of autolysosomes. This p53 target gene is an essential factor in the proper functioning of the apoptosis regulatory network and p53-dependent autophagy [21]. Furthermore, Tasdemir et al. demonstrated that cytoplasmically localized p53 through inactivation of AMPK and subsequent activation of the mTOR signaling pathway leads to inhibition of autophagy in the cell [22].
Scherz-Shouval and co-authors detected a relationship between autophagy and apoptosis processes. They revealed that under starvation conditions, p53 post-translationally inhibits the regulation of LC3 level, which leads to its accumulation in cells and decreases the rate of the autophagy process. The consequence is cell death by apoptosis [23].

Bcl-2, members of the B-cell lymphoma family of proteins, inhibits the release of cytochrome c from the mitochondrial interior, thereby playing a key role in the intrinsic apoptotic pathway [24]. Beclin 1 is a key element involved in autophagosome formation and is also an important component of the PI3K/Vps34 class III complex [25]. Bcl-2 binding to Beclin 1 leads to dissociation of Beclin 1 from PI3K class III, which results in inhibition of autophagy [26]. However, the occurrence of mutation in the BH3 receptor domain of Bcl-2 or Beclin 1 domain leads to dysfunction of Bcl-2/Beclin 1 complex, intensification of autophagy and promotion of cell survival [27][28].
Under nutrient-deficient conditions, autophagy is an essential element for cell survival. Activation of JNK1 (C-Jun N-terminal protein Kinase 1) and phosphorylation of residues involved in the Bcl-2′s regulatory loop lead to the destruction of the Bcl-2/Beclin 1 complex and consequently to initiation of autophagy [29]. Under standard conditions the phosphorylated Bcl-2 molecule binds to Bax, leading to inhibition of apoptosis. Due to the normal phosphorylation of Bcl-2, it is possible to maintain the integrity of the mitochondrial membrane, which in turn protects cells from death by the intrinsic apoptotic pathway. Sustaining the integrity of the mitochondrial membrane prevents the release of proapoptotic proteins from within the organelle into the cytoplasm [30]. However, in the situation of long-term nutrient deficiency, autophagy is not able to alleviate cellular damages. Intensification of Bcl-2 phosphorylation (hyperphosphorylation) promoted by JNK1 occurs [31]. This results in dissociation of the Bcl-2 molecule from Bax and apoptotic cell death. When the cell receives adequate amounts of nutrients, Bax/Bak and Beclin 1 bind to Bcl-XL or Bcl-2, leading to the inhibition of activation of both processes, apoptosis and autophagy [28][32].

2.3. Atg Proteins in Apoptosis and Autophagy

The level of autophagy-related proteins in a cell is regulated by the availability of growth factors and nutrients essential for proper cell functioning. Among Atg proteins we can distinguish the Atg12–Atg5 complex, which is important in both autophagy and apoptosis [33].
The Atg12–Atg5 complex, essential for autophagosome formation, also participates in the apoptotic pathway in an unconjugated form. Atg12 binding through a BH3-like motif to Bcl-2 and Mcl-1 (Myeloid Cell Leukemia 1) increases the intensity of the intrinsic apoptotic pathway. Interestingly, the anti-apoptotic properties of Mcl-1 can be inhibited in the cell as a result of abnormal Atg12 expression. Moreover, silencing Atg12 in an apoptotic cell will result in the inhibition of Bax induction and the arrest of cytochrome c release from the mitochondrion [34]. Cleaved by cell stress-activated cysteine proteases (caplains), Atg5 plays a significant role in the initiation of the intrinsic apoptosis pathway. As a consequence of cleavage, translocation of the N-terminal part of the Atg5 protein into the mitochondrion occurs. Inside the organelle, this fragment interacts with Bcl-XL allowing Atg-5 to be involved in the release of cytochrome c from the mitochondrion and indirectly participating in apoptosis promotion [35]. Taken together, Atg5 and Atg12 proteins may be involved in both autophagy and apoptosis, depending on the cellular conditions.

p62, also known as SQSTM1, is a multi-domain adaptor protein that controls cell viability by regulating both autophagy and apoptosis [36]. By polymerizing with other p62 molecules, this protein has the ability to accumulate ubiquitin-tagged proteins. Aggregates of p62 (called p62 speckles), through their storage properties and ability to bind to the LC3 molecule, recognize, gather, and most importantly transport cargo to the autophagosomes [15]. p62, through its ability to activate caspase-8 on the autophagosome membrane also plays an important role in the induction of apoptosis. The autophagy-dependent mechanism of caspase-8 activation involves simultaneous induction of autophagy and activation of caspase-8. The autophagosomal membrane provides some kind of platform on which the caspase cascade leading to cell death by apoptosis is initiated. Depletion of Atg3 or Atg5 leads to the suppression of autophagosome formation, which in turn results in the inhibition of caspase-8 activation and subsequent suppression of apoptosis [37].

2.5. Caspases in Apoptosis and Autophagy

Caspases, enzymes belonging to the group of cysteine proteases, have been known to science for a long time. Their participation and the exact mechanism of action in the process of apoptosis have been widely studied and described in many scientific articles [38][39][40]. These enzymes are involved in both intrinsic and extrinsic pathways of apoptosis, acting as initiators (caspases-2, -8, -9 and -10) or effectors (3, -6 and -7) [41]. Caspases under standard conditions occurring in the form of inactive zymogenic precursors can be activated under the influence of various external or internal stimuli that initiate apoptosis. Activated enzymes may participate in the apoptotic pathway [42]. Despite the significant differences between the autophagy and apoptosis processes, the conducted studies indicate that caspases also affect the autophagy process. Oral and co-authors have shown that overexpression of caspase-8 leads to degradation of Atg3 protein and thus prevents its pro-autophagic activity [43]. Furthermore, Wirawan et al. showed that two key components of the autophagy-inducing complex (class III PI3K and Beclin 1) are direct substrates of caspases. It was observed that in response to different signals inducing the two apoptotic pathways, these enzymes cause cleavage of the complex components. Thus, the researchers confirmed that class III PI3K and Beclin 1 are substrates of caspases [44]. In contrast, Han and co-authors showed that caspase-9, by promoting Atg7-dependent LC3-II transformation, facilitates autophagosome formation. Moreover, the authors showed that depending on the cellular conditions, Atg7 can also form a complex with caspase-9 and directly inhibit the proapoptotic activity of the enzyme [45]. All of these studies indicate there is a mutual correlation between autophagy and apoptosis processes.

More
© Text is available under the terms and conditions of the Creative Commons Attribution (CC BY) license (http://creativecommons.org/licenses/by/4.0/)
Upload a video for this entry
Information
Subjects: Medicine, Research & Experimental
Contributor MDPI registered users' name will be linked to their SciProfiles pages. To register with us, please refer to https://encyclopedia.pub/register :
Agnieszka Gornowicz
View Times: 86
Revisions: 2 times (View History)
Update Time: 15 Jun 2021
Table of Contents
1000/1000
Hot Most Recent