Submitted Successfully!
Thank you for your contribution! You can also upload a video entry related to this topic through the link below:
https://encyclopedia.pub/user/video_add?id=10832
Check Note
2000/2000
Trypsin Induced Degradation of Amyloids
Edit
Upload a video
This entry is adapted from 10.3390/ijms22094828

Proteolytic enzymes are known to be involved in the formation and degradation of various monomeric proteins, but the effect of proteases on the ordered protein aggregates, amyloid fibrils, which are considered to be extremely stable, remains poorly understood. In this work we study resistance to proteolytic degradation of lysozyme amyloid fibrils with two different types of morphology and beta-2-microglobulun amyloids.

The development of a number of serious diseases, so-called conformational diseases, which include Alzheimer’s, Parkinson’s, prion diseases, etc.[1][2][3][4][5][6][7] is associated with the accumulation of amyloid fibrils in various organs and tissues of the human body. The appearance of an amyloidogenic protein in the body may be due to the proteolytic cleavage of its precursor, which itself does not tend to aggregate to form amyloid fibrils[8][9][10][11]. For example, β-secretase generates several short peptides from the amyloid precursor protein (APP). The formation of amyloid fibrils from one of these peptides (42 amino acid residues long) is associated with Alzheimer’s disease[8]. Thus, the processing of precursor proteins with the participation of proteolytic enzymes leads to the formation of native proteins and peptides[12], including those with amyloidogenic properties.
In addition, proteases can modify native proteins and induce, accelerate, slow down, or even inhibit their aggregation[13][14][15]. In particular, it was shown that the rate of whey protein concentrate (WPC) aggregation increases significantly upon treatment with trypsin and noticeably decreases upon treatment with protease A, pepsin, and protease M[13]. This indicates the possible involvement of proteolytic enzymes in the fibrillogenesis of various proteins. Recent studies also indicate that proteases, in particular trypsin, NET-associated elastase, proteinase K, and HTRA1, can lead to degradation of mature amyloid fibrils, including those accumulating in amyloid plaques in vivo[16][17][18][19][20][21]. This is probably due to the main function of proteolytic enzymes, which consists of the degradation of misfolded proteins[22][23][24][25][26][27]. Assessment of fibril resistance to proteolysis is currently used as an effective approach to the analysis of external factors influence on the structure and stability of amyloids[18]. However, despite the widespread use for the study of amyloids, the mechanisms of fibril degradation under the influence of proteases and changes in the structure and cytotoxicity of amyloids, induced by the treatment with these enzymes, remain poorly understood. The study of these issues was the aim of this work.

In this work, we investigated the process of degradation of amyloid fibrils formed from two amyloidogenic proteins with significantly different primary, secondary, and tertiary native structure after the action of the trypsin serine protease, which is widely used to estimate the resistance of fibrils to proteolysis. Trypsin is one of the main digestive enzymes and effectively catalyzes the hydrolytic cleavage of proteins and peptides at the carboxyl side of L-lysine or L-arginine residues (Figure 1). Lysozyme and beta-2-microglobulin were chosen as amyloidogenic proteins in this study. Accumulation of amyloid fibrils of these proteins leads to the development of hereditary lysozyme systemic amyloidosis (ALys amyloidosis[28]) and dialysis-related amyloidosis (DRA[29]), respectively. Fibrillogenesis of lysozyme was induced using two alternative methods, which made it possible to obtain protein aggregates with a polymorphic structure[30]. 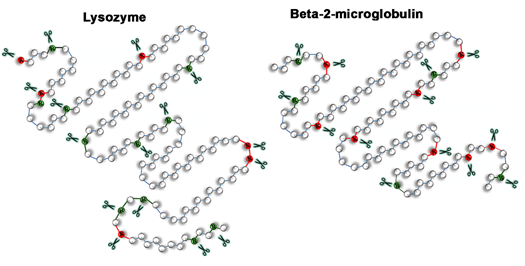 Figure 1. Trypsin cleavage sites in the lysozyme and beta-2-microglobulin amino acid sequences. Lysine (K) and Arginine (R) amino acid residues in the primary sequence of the proteins are highlighted in red and green color, respectively.
We revealed changes in the structure and stability of amyloid fibrils after the action of trypsin using a number of spectroscopic approaches, including fluorescence of the amyloid-specific dye thioflavin T (ThT) and the hydrophobic probe 1-anilinonaphthalene-8-sulfonic acid (ANS), as well as transmission electron microscopy (TEM) for amyloid fibrils imaging (at the Figure 2 presented for lysozyme amyloids). It was demonstrated that trypsin can lead to degradation of amyloid fibrils, which results in fragmentation of their fiber and a decrease in the ordering of amyloid-forming proteins with the formation of non-fibrillar aggregates of various sizes. In this case, trypsin facilitates the degradation of fibrils across the entire length of their fiber rather than starting from the fibril ends, suggesting that proteolysis is not directional. These ideas are in good agreement with the results of the work Chander et al.[19], where through the electron microscopic analysis of immunogold labeling of trypsin binding to Aβ40 and Aβ42, the protease binding to fibrils along the entire length of their fiber and not only to the ends of the fibrils was shown. It should be noted that the mechanism of proteolytic degradation of amyloid fibrils observed by us is similar to that previously proposed by Poepsel et al.[17] in the study of fragmentation of the tau protein fibrils under the action of serine protease HTRA1 (belongs to the high temperature requirement A (HtrA) family of serine proteases), implying the universality of protease action. According to the observed degradation mechanism, trypsin can affect both the structure of protein molecules forming β-sheets and intermolecular hydrogen bonds involved in the formation of amyloid fibers. 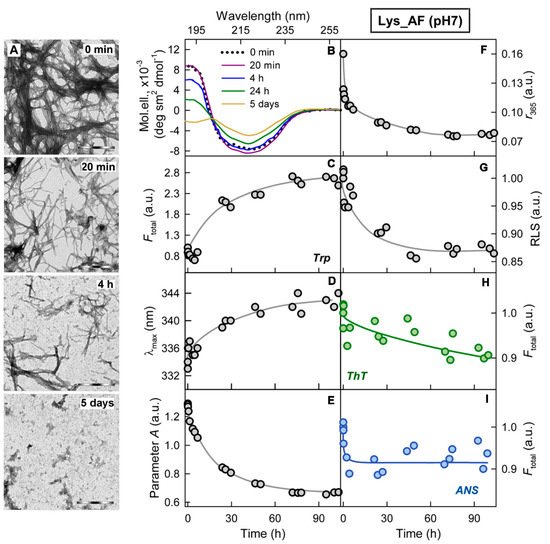 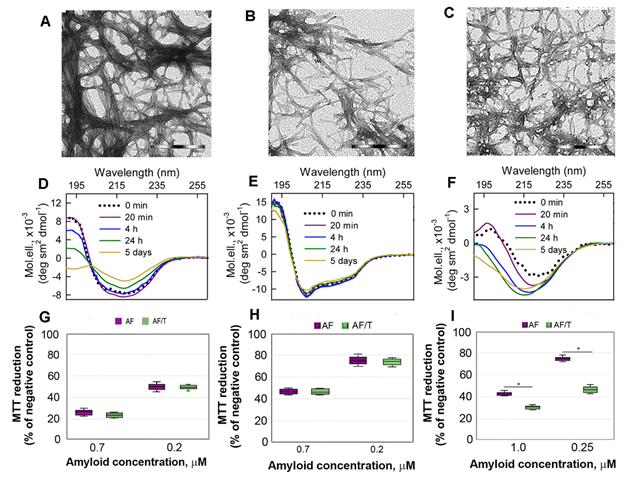 Figure 3. Cytotoxicity of amyloids formed from different proteins. (A-C) The electron micrographs, (D-F) CD spectra and (G-I) dose-dependent inhibition effect on HeLa cells (determined by MTT assay) of amyloid fibrils formed from lysozyme at pH7 (A, D, G) and pH2 (B, E, H) and from beta-2-microglobulin (C, F, I) . Scale bars at the electron micrographs are equal to 1 μm. At the Panels (G-I) data are expressed as medians and interquartile ranges, whiskers denote 1.5 × IQR. ANOVA, Tukey post hoc test, * р < 0.01.

Binding of proteases to amyloids and proteolytic degradation of fibrils, at first glance, seems to be a positive effect in terms of amyloidosis treatment; however, this is actually not entirely true. The interaction of trypsin with abnormal aggregates amyloid fibrils, which was shown in our work, as well as in the work[19], can lead to the inability of the enzyme interaction with other substrates. For example, trypsin is required for Aβ-peptide catabolism, and its interaction with Aβ-peptide amyloids can reduce clearance of soluble Aβ-peptide, and an increased concentration of Aβ-peptide enhances its aggregation. A similar conclusion was reached in the study of the trypsin binding to fibrillar Aβ-peptide[19]. This assumption is also in a good agreement with the results according to which mice deficient of proteolytic enzymes exhibited elevated levels of Aβ while overexpression of neprilysin in APP-transgenic mice could reduce the deposition of fibrillar Aβ[31][32].

In addition, we showed that proteolytic degradation of amyloids did not reduce cytotoxicity of the protein aggregates for Hela cells, as might be expected (at the Figure 3 G-I). We attribute this to the formation of highly toxic non-fibrillar aggregates along with the formation of non-toxic protein monomers and their fragments induced by trypsin. A high cytotoxicity of large disordered aggregates forming after exposure of the lysozyme and beta-2-microglobulin fibrils to the protein with chaperone activity alpha-B-crystallin was already demonstrated by us earlier[33].

In conclusion, we show that the proteolytic enzyme of the pancreas, trypsin, can induce degradation of amyloid fibrils, and the mechanism of this process is qualitatively the same for amyloids with different structure and morphology (Figure 4). At the same time, the efficiency and rate of fibril degradation are dependent on the structure of the amyloid-forming protein as well as on the morphology and clustering of amyloid fibrils, which determines the number, localization, and availability of protease cleavage sites. Proteolytic degradation of amyloids not only does not reduce, as might be expected, but, in some cases, even increases cytotoxicity of the amyloid fibrils, presumably due to the formation of more toxic non-fibrillar aggregates. 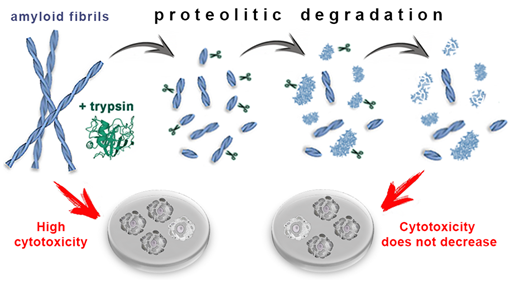 Figure 4. Mechanism of trypsin induced degradation of amyloids formed from different proteins: 1) first, amyloid clots are declustering, and amyloid fibers are fragmented; 2) then, the structure of shortened fibril fragments “decompacts” and becomes less ordered, 3) after which these aggregates degrade to monomers, which, in turn, degrade into short fragments. The cytotoxicity of amyloids treated with trypsin not only does not decrease, but can even increase (this has been demonstrated for beta-2-microglobulin fibrils).