Submitted Successfully!
Thank you for your contribution! You can also upload a video entry related to this topic through the link below:
https://encyclopedia.pub/user/video_add?id=10811
Check Note
2000/2000
Boarhounds
Edit
This entry is adapted from 10.3390/ani11061661

Boarhounds are hunting dogs bred for hunting wild boar. The most commonly used for this purpose are hounds, dachshunds or terriers, but pointers, spitz or retrievers can also be used. The dog should be courageous, persistent, passionate, disciplined, sharp and obedient. Hunting in this group of dogs can be carried out individually and for such breeds are used small and collective breeds as well as medium and large breeds of dogs.

Boarhounds are hunting dogs, specifically bred for hunting wild boar. Small boarhounds, such as terriers and dachshunds, are most often used for individual hunting. During individual hunting, the dog’s task is to find and surround the boar. On the other hand, large boarhounds, including hounds, are used in group hunting, which has different requirements from the dog. During group hunting, boarhounds are supposed to separate the wild boar from the herd, so that the hunter has a clear shot. There are different physical and psychological traits that boarhounds have to carry to be able to effectively assist in boar hunts. First of all, they should be relatively small in size to ensure speed, maneuverability, and responsiveness to their handler. Aside from physical fitness, boarhounds need to be independent when hunting, which allows them to follow the game at a distance from the hunter. Boarhounds also need to be stubborn, so that the only footprints they are interested in have been left by the wild boar, not other game. There are diverse breeds used as boarhounds, which differ in size, weight, mobility and temperament. The majority of dogs used as boarhounds belong to three FCI groups (Fédération Cynologique Internationale): terriers, dachshunds, and hounds [1]. Figure 1 presents typical representatives of each group. 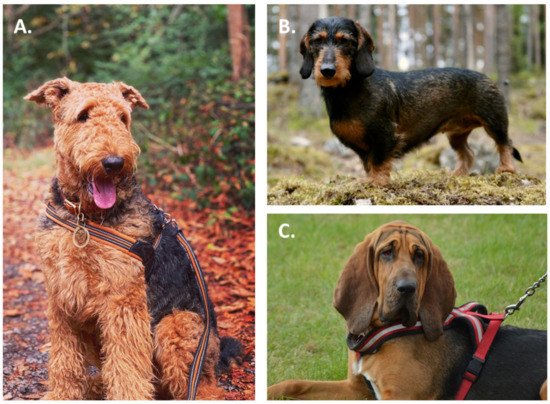 The complete dataset included 1867 individuals belonging to 39 dog breeds. Figure 2 presents the breed distribution analyzed in this study. The most numerous breeds were Polish Hunting Dog (662 individuals), German Hunting Terrier (269 individuals), Slovak Kopov (238 individuals) and Wire-haired Dachshund (220 individuals). All boarhound breeds analyzed in this study have been grouped into three breed groups, i.e., (1) hounds (n = 1109), (2) terriers (n = 373), and (3) dachshunds (n = 233). All animals (n = 1867) were included in variance analysis, in which sex and age were factors influencing the results of the hunt trials. Data reduction was applied for variance analysis in which breed or breed group were factors. Breeds represented by a small number of individuals (<50), e.g., English Springer Spaniel, Hanoverian Scent Hound, or German Short-haired Pointing Dog, were excluded from the analysis of the influence of the breed (n = 1661) on the hunt trials. In the breed group, there were 152 dogs removed from the database (n = 1715). The reason for data reduction in this case was to sort out breeds that were classified as flushing dog, pointing dog, spitz and primitive types.

Table 2 presents the effects of sex on the results of the hunt trials in boarhounds. A total of 1104 dogs and 763 bitches were evaluated altogether. Dogs scored numerically higher than bitches in every competition. Dogs also scored numerically higher than the average for the entire study population (significance was not tested). Highly significant differences between sexes occurred in the total score and the competitions: scent (nose), searching, courage and sharpness, voice on trail, voice when game in sight, correctness of attack, and persistence (p < 0.01). No statistical significance was found in obedience, tracking on the lead, and announcing/barking (p > 0.05).
Table 2. The impact of sex and age on the results of the hunt trials for boarhounds.

All dogs, i.e., 1867 animals, were used to analyze the influence of age, and the results are presented in Table 3. The dogs were divided into six age groups. The most numerous group were dogs from group II (615 individuals), and the least numerous group was group I (146 individuals). There was a constant increase in the scores received for each competition with age. Scores equal to or above the average occurred in group III and older in the total score and in the following competitions: scent (nose) (p < 0.05), searching, courage and sharpness, correctness of attack, obedience, tracking on the lead and announcing/barking (p < 0.01). In all categories, the older dogs achieved higher results than the younger ones, especially in the obedience, voice and persistence competitions (p < 0.01). The smallest differences occurred in the scent (nose) and announcing/barking competition and involved the youngest (groups 1 and 2) and the oldest dogs (group 6) (p < 0.01).

Table 3 presents the effects of breed group on the results of the hunt trials in boarhounds. The cohort size for the breed group (n = 1715) included only typical boarhounds (i.e., hounds, terriers, and dachshunds), which were predominant groups in the dataset. The remaining groups belonged to pointing dogs, flushing dogs, and spitz and primitive types, which were numerically underrepresented and therefore omitted from this analysis. There were three main groups in boarhound hunt trials: hounds (1109 individuals), terriers (373 individuals), and dachshunds (233 individuals). The most numerous groups were hounds, the leading representative of which was the Polish Hunting Dog, and the least numerous were the dachshunds with the Wire-haired Dachshund as the typical representative. The mean of the total score among the three breed groups was 117.40, and it was the highest mean among all the scores analyzed. The boarhounds classified into three breed groups (based on FCI classification) obtained the highest results for obedience (3.69) and scent (nose) (3.55), and the lowest for announcing/barking (0.24). The best total score was achieved by the dachshund dogs (119.96), and the lowest by the terriers (114.26) (p < 0.01). Dachshunds scored numerically higher than or equal to almost all competitions except scent (nose), obedience and announcing/barking. There were no differences between the breed groups in scent (nose), voice on trail, correctness of attack and obedience (p > 0.05).
Table 3. The impact of breed groups on the results of the hunt trials for boarhounds.

Table 4 presents the effects of breed on the results of the hunt trials in boarhounds. The effect of breed was analyzed in eight breeds (1661 individuals), with a total of more than 50 individuals. The most numerous breed was Polish Hunting Dog (662 individuals), and the least numerous was Polish Hound (58 individuals). The mean for the total score among the analyzed breeds was 117.27 points. Boarhounds achieved the highest results in the obedience competition (3.71) and the lowest in the announcing/barking competition (0.24). Highly significant differences were found in the overall score between breeds (p < 0.01). The Welsh Terrier and Polish Hound differed from the Alpine Dachsbracke, Polish Hunting Dog, Wire-haired Dachshund, German Hunting Terrier and Slovak Kopov. No differences between breeds occurred in the tracking on the lead competition (p > 0.05). The smallest differences were in the obedience and search competition. By contrast, the greatest differences between breeds were in the courage and sharpness competition. The Polish Hound achieved the lowest score among all the competitions. The Alpine Dachsbracke scored numerically the highest in most of the competitions, except persistence, obedience, and announcing/barking.
Table 4. The impact of breed on the results of the hunt trials for boarhounds.