Submitted Successfully!
Thank you for your contribution! You can also upload a video entry related to this topic through the link below:
https://encyclopedia.pub/user/video_add?id=10769
Check Note
Jandro Abot 2021-06-22 05:15:57
The entry needs contains quite a few typographical and grammatical errors: need to use acronyms initially’; replace “processed” by “process”; missing conjugated verb after “subgrain formation”; replace “nanoscopical” by “nanoscopic’; replace “it direct” by “its direct”; provide definition of the NVABB acronym; replace “deffended” by “defended”; replace “allowes” by “allows’; remove the link to “interactions” since it is not applicable to a technical filed; replace “asuccesful” by “a successful”; replace “the other are” by “the others are”; the second bullet point under Preload should be brought inside; the dots after the bullet points and before the text should be removed; place a comma between the variable definitions and letters used to describe them; provide definition of the NC acronym; replace “define Jerez-Mesa” by “define. Jerez-Mesa”; replace “on the referenced Thesis Dissertation” by “on that reference”; replace “be note that” by “be noted that”; replace “dependant” by “dependent’ relace “micrometrical” by “microscopic”; replace “previous assessment phase referred to previously to plan the actual implementation of the process” by “previous assessment phase referred previously as the actual implementation of the process”;
2000/2000
Peer Reviewed
Vibration-Assisted Ball Burnishing
This is a peer-reviewed entry published in Encyclopedia Journal, full entry can be found at 10.3390/encyclopedia1020038

Vibration-Assisted Ball Burnishing is a finishing processed based on plastic deformation by means of a preloaded ball on a certain surface that rolls over it following a certain trajectory previously programmed while vibrating vertically. The dynamics of the process are based on the activation of the acoustoplastic effect on the material by means of the vibratory signal transmitted through the material lattice as a consequence of the mentioned oscillation of the ball. Materials processed by VABB show a modified surface in terms of topology distribution and scale, superior if compared to the results of the non-assisted process. Subgrain formation one of the main drivers that explain the change in hardness and residual stress resulting from the process.

This Encyclopedia entry deals with the main aspects and details related to the ball burnishing process assisted with a vibratory signal (namely, vibration-assisted ball burnishing or VABB henceforth). Ball burnishing is based on deforming plastically with a preloaded sphere the irregularities of a surface that has been previously machined, so that its roughness or texture features are reduced while hardness is increased due to cold deformation (Figure 1a). However, this interaction is three-dimensional and is very much influenced by the friction between the ball and the material. The main physical vector to achieve that deformation is the preload force with which the ball is preloaded and the number of passes by which the target surface is covered. By assisting the process with vibrations, a vibratory component of the force Fv is overlapped to the preload Fp, resulting in the overall vibratory burnishing force Fb, as shows Figure 1b. 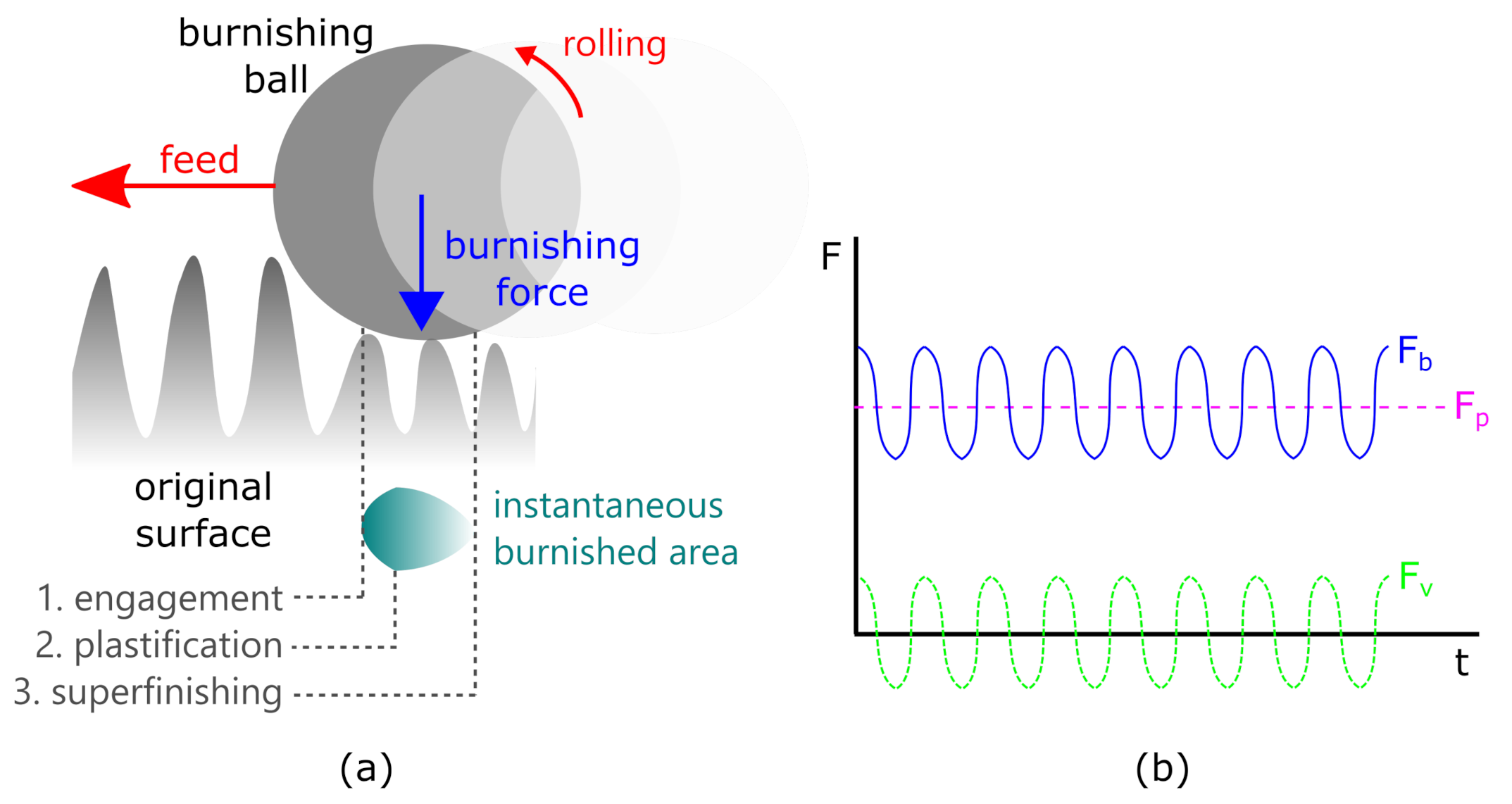 Figure 1. (a). General overview of a vibration-assisted ball burnishing process. (b). Components of the burnishing force (Fb).
The process must be understood as the upgrade of a classical operation complemented with an extra layer that introduces new dynamics and modifies the way the tool interacts with the material of the target surface. The oldest references related to ball burnishing itself refer to the processing of certain parts of the automobilistic industry in the sixties [1]. The process was described simply as a means whereby the motion of a ball or roller displaces the peaks of the surface roughness profile into the valleys. Today, we know that this apparently simple description does not account for the very complex mechanisms that are put at stake when this kind of process is deployed to provide a certain workpiece with a desired finishing state. The phenomenon whereby the material surface is modified is more likely to be compared to how the wavy surface of calm waters on the sea are smoothly moved by the effect of the wind, changing their direction, but keeping a very similar pattern all the way through.
Ball burnishing has been often cited because of its direct effects on the surface texture. The actual description of this modification can be described as a triplet:
As the last of the described effects is only observed if the proper force and number of passes are combined to obtain the desired surface finishing, it could be said that the original explanation of ball burnishing in which material peaks were introduced in the valleys is not totally accurate.
Besides the topological effects of the process, the material also embodies other transformations that define its state after ball burnishing. Specifically, by experiencing cold deformation, the material is ultimately cold-hardened, providing the final workpiece with a reinforced outer layer with enhanced performance. Furthermore, a higher compressive residual stress profile is formed in the subsurface layers of the material. This change of mechanical state of the material is also often observed in the change of the microstructural state of the outer layers of the material itself, if a cross-section of the processed surface is observed.
The assistance of ball burnishing in the mid-twentieth century responded at the time to an extended trend in the manufacturing innovation ecosystem based on providing classical operations with extra functions that enhanced the outputs of these processes. This is how hybrid processes such as vibration-assisted machining [2] or laser-assisted ball burnishing [3] were born and are still today used in many manufacturing companies. Specifically, VABB was brought into play into the finishing operations industry, incorporating a vibratory movement to the burnishing ball simultaneous to its rolling over the surface irregularities while it runs the programmed trajectory. VABB was for the first time reported during the 1970s, designed as ultrasonic burnishing. It was assisted by 41.5 kHz vibrations and a variable amplitude from 5 to 10 μm [4]. The first detailed academic bibliography dealing with VABB dates from the 1980s [5], although some references could be found in previous years focusing on the comparison of the friction coefficient, wear rate or load bearing capacity of VABB-treated surfaces with regards to surfaces finished through other processes such as boring, grinding or even simple ball burnishing. However, these references did not focus on the phenomenology behind the results or their relation with the descriptive parameters of the surfaces themselves.
This entry is divided in three sections. The first describes the overall results observed on different materials after VABB. The second offers an insight into the physical origins of the vibratory assistance. Furthermore, finally, the hardware and physical systems reported in literature are explained.

More
© Text is available under the terms and conditions of the Creative Commons Attribution (CC BY) license (http://creativecommons.org/licenses/by/4.0/)
Upload a video for this entry
Information
Subjects: Engineering, Mechanical
Contributors MDPI registered users' name will be linked to their SciProfiles pages. To register with us, please refer to https://encyclopedia.pub/register :
Ramón Jerez-Mesa
,
Jordi Llumà
,
J. Antonio Travieso-Rodriguez
View Times: 228
Online Time: 11 Jun 2021
Table of Contents
1000/1000
Hot Most Recent