Submitted Successfully!
Thank you for your contribution! You can also upload a video entry related to this topic through the link below:
https://encyclopedia.pub/user/video_add?id=10728
Check Note
2000/2000
Animal Models for DOHaD Research
Edit
This entry is adapted from 10.3390/biomedicines9060623

The association between fetal development and the increased risk of adult disease has attracted a great deal of attention to the concept of developmental programming or developmental origins of health and disease (DOHaD) These findings, combined with numerous subsequent epidemiologic investigations, indicate that the perinatal period, a critical window of organogenesis, is a vulnerable time in terms of the impact of adverse environmental insults [1]. Several hypotheses, such as thrifty phenotype [2], maternal capital [3], and predictive adaptive responses [4], have been developed to explain the epidemiological observations of an association between early life insults and diseases in adulthood. However, these hypotheses do not propose mechanistic pathways by which disease proceeds or suggest potential interventions for the prevention of adult diseases.

Hypertension and related cardiovascular diseases are leading causes of mortality worldwide [5]. The WHO reported that 1 in 4 men and 1 in 5 women have hypertension [6]. Due to the multifactorial nature of hypertension, the use of various animal models, which induce hypertension by various mechanisms and produce the same end result, is advantageous [7][8]. In the past decades, novel drug classes and interventional strategies for the treatment of hypertension have been developed using hypertensive animal models [9].

These include maternal undernutrition or overnutrition, maternal disease states, lifestyle changes, substance abuse, environmental exposure to toxins/chemicals, and medication use during pregnancy [10][11][12][13][14]. Hypertension, diabetes, kidney disease, and inflammation are common maternal diseases that complicate pregnancy. On the other hand, programming processes geared toward disease could be reversed by shifting therapy from adulthood to the perinatal period, that is to say, by reprogramming [15]. Although the pathogenesis behind hypertension of developmental origins is poorly understood at present, our understanding of animal models used to study common mechanistic pathways has advanced greatly in recent years, which helps in developing efficient strategies to reprogram hypertension and prevent it from happening.

This review summarizes the contributions of animal models to DOHaD research with a focus on hypertension. It is proposed that integrating evidence from diverse animal models is essential in order to advance our understanding of hypertension of developmental origins and develop novel reprogramming strategies to alleviate the global burden of hypertension.

A broad range of animal models have been established to validate that the associations found in human observational studies can be replicated under experimental conditions. Second, animal models can be classified according to molecular mechanisms. To date, hypertension of developmental origins has been attributed to mechanisms [10][11][12][13][14][15] including reduced nephron number, oxidative stress, an aberrant renin–angiotensin system (RAS), gut microbiota dysbiosis, and sex differences, among others. A summary of the selection of animal models for the study of hypertension of developmental origins is depicted in Figure 1. 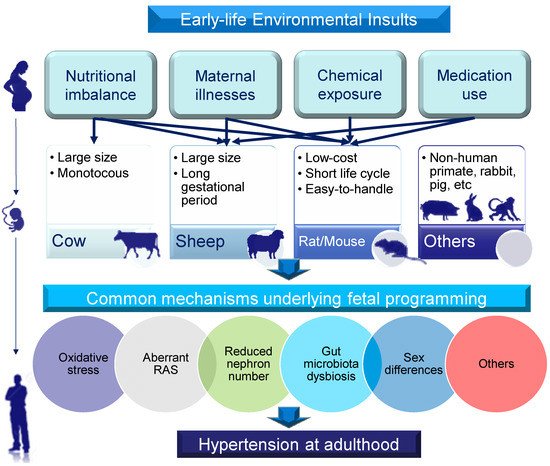 Figure 1. Schematic illustration of the selection of animal models for studying hypertension of developmental origins in adulthood according to early-life environmental insults, animal species, and common mechanisms. Lines with arrows (top section) indicate types of early-life insults produced in particular species of animals to induce hypertension in adult offspring. The study of other animals in DOHaD research (non-human primates, rabbits, pigs, etc.) is limited.

Even though significant advances have been made in developing diverse animal models to study hypertension of developmental origins, the need for meaningful clinical translation remains a research priority. The following conditions should be taken into consideration when we select animal models. Second, the gestation period and litter size should be comparable to those of humans. Third, it is crucial that animal models share similar features of adverse outcomes to those seen in human studies, which can be measured.

Across different species, critical development periods for major organ systems are not uniform. Blood pressure is tightly controlled by coordination among the kidney, heart, brain, and other organ systems. As such, the translatability of studies performed in animals should be approached with caution, as many key stages of BP-controlled organ development that occur before birth in humans occur after birth in some species [16][17][18][19].

Many animal studies on hypertension of developmental origins focus on renal programming [20][18]. Unlike in humans, rat kidneys continue to develop after birth and complete at 1 to 2 weeks postnatally [21]. Accordingly, adverse environmental conditions during pregnancy as well as lactation can impair kidney development, consequently resulting in hypertension in rodents [20]. For example, repeated dexamethasone administration on embryonic days 15 and 16 [22], from gestational days 16 to 22 [23], or from postnatal days 1 to 3 [24] was associated with developmental programming of hypertension in adult rat offspring.

Another unsolved problem is that almost no studies have taken a comprehensive approach to simultaneously evaluating every BP-controlled organ system in response to in utero exposure at specific developmental stages to assess their relative vulnerability in an experiment. Due to the complex nature of the interplay between organogenesis and environmental insults, the programming effect on various organs might be dissimilar in different animal species. Hence, it is apparent that the selected animal paradigm should mirror the timing of human organ development as closely as possible so that the effects of early-life insults can be fully assessed.

The advantages of a shorter gestation period and higher offspring yield compared to large animal models make rodent models the most commonly used in DOHaD research. There is a large set of studies on hypertension of developmental origins that were carried out in rats (Table 1 and Table 2). If an early-life insult is induced by surgical manipulation or if delivery requires repeated procedures, short gestation in rodents could become disadvantageous. In addition, the short gestation time may not allow for the permanent resolution of developmental plasticity and the identification of critical time periods that are vulnerable to insults.

Table 1. Summary of animal models of the developmental programming of hypertension, categorized according to maternal illness and pregnancy complications.

Table 2. Summary of animal models of the developmental programming of hypertension, categorized according to chemical and medication exposure.

Studies tabulated according to type of chemical or medication, animal model, and age at evaluation. TCDD = 2,3,7,8-tetrachlorodibenzo-p-dioxin; SD = Sprague-Dawley.

Unlike humans, rodents generally have more than one offspring, and litter sizes of 8–12 pups are usually seen. Such a large litter size is also a disadvantage when compared to singleton births common in humans and large animal models. Accordingly, normalizing the size of each litter after birth should be considered to control for differences in offspring food intake, maternal care, and pup growth [53]. Since these limitations exist, the complete translation of findings in rodents to human medicine is seriously compromised.

On the other hand, gestational length in sheep is around 150 days, during which the fetal size and development rate are similar to those of humans [54]. With the use of ewe models, maternal caloric restriction [55], maternal hypoxia [38], and prenatal glucocorticoid exposure [51][52] have been shown to cause hypertension in adult progeny. Although these early insults have shown the same adverse effects on offspring BP in sheep and rats, whether different gestation periods and litter sizes differentially impact hypertension of developmental origins in rats and large animals awaits further evaluation.

As we mentioned earlier, rats are the most commonly used species for the developmental programming of hypertension. However, a critical assessment of the data show that this phenomenon is mostly observed when BP is typically measured by the tail cuff method; in contrast, hypertension is not detected in telemetrically instrumented animals [56]. Although BP data obtained from the tail cuff method are reported to correlate well with findings of direct arterial catheter and telemetry methods [57], part of the increased BP in offspring found after early-life insults may be due to an increased stress response related to sympathetic nerve activity.

In adulthood, one rat month is roughly equivalent to three human years [58]. Accordingly, Table 1 lists the timing of hypertension development measured in rats from 12 weeks to 8 months of age, which is equivalent to humans of a specific age group ranging from childhood to early adulthood. Thus, there remain gaps in our knowledge regarding the long-term adverse effects of maternal insults on BP in older adult offspring.

Several species have been studied for cardiovascular outcomes programmed by maternal adverse exposure, including guinea pigs [59], swine [60], and non-human primates [61]. However, none of them have been used to study hypertension of developmental origins. It is important to remember that large animals should not be neglected, as they are generally more physiologically suitable models with regard to human conditions.

In the current review, the wide range of early-life insults certainly influenced the outcomes, resulting in the reported heterogeneity. The results depended strongly on the applied measurement technique and animal model. A huge percentage of studies employed male-only small animal models with small sample sizes. Future animal studies should improve the methodological quality by applying randomization, blinding, and sample size calculation techniques in order to avoid bias and collect data of better quality.

Currently, reprogramming strategies could be categorized as nutritional intervention, lifestyle modification, or pharmacological therapy. It stands to reason that avoiding in utero exposure to adverse conditions is the most effective strategy for preventing hypertension of developmental origins. Another approach is the use of nutritional intervention during pregnancy and lactation [62]. Although the targeting of specific nutrients as a reprogramming strategy opens a new avenue for prevention [63], there remains a lack of accurate dietary recommendations for specific nutritional requirements for pregnant women in case of deficiencies [64][65].

Research on short-lived rodent models has provided significant results, revealing potential pharmacological therapies for preventing hypertension of developmental origins. The standardization of animal experiments will improve the comparability of such studies. During the preparation of the current review, we found that almost no studies tested different doses or the use of different species. Additionally, the follow-up period after the cessation of interventions in most cited studies was rather short.

The efficacy of the intervention can be influenced by its duration with respect to organ development in a dose- and species-specific manner. Thus, further translational research into the pharmacokinetics and metabolism of pharmacological intervention is required to validate and compare its safety and therapeutic potential between humans and other species.

Various small (e.g., rat and mouse) and large (e.g., cow and sheep) animal models have made important contributions to the DOHaD research field, giving rise to convincing evidence of a causal relationship between various early-life insults and the risk of developing hypertension in later life. Our review highlights that animal models are not only used to investigate the mechanisms behind hypertension of developmental origins, but also have an impact on the development of early-life interventions as a reprogramming strategy to prevent the development of hypertension in adulthood.

There are still several questions that need to be answered. Additionally, this review did not consider the potential for the programming of hypertension by paternal factors that clearly exist in the DOHaD field [66]. Moreover, little reliable information currently exists with regard to optimal doses and durations of pharmacological interventions for pregnant women and the long-term effects on their offspring. Currently, preventive strategies should focus on avoiding exposure to theoretically harmful agents perinatally and promoting a healthy lifestyle.

Each of the abovementioned animal models was used to study a specific hypothesis and neither can be considered superior with regard to all aspects of research on hypertension of developmental origins. Therefore, further research is needed to gain a better understanding of the types of early-life insults, other mechanisms behind hypertension of developmental origins, the ideal therapeutic dose and duration of early intervention, and the appropriate animal species. It is proposed that taking a DOHaD approach with maximum use of the animal evidence should be of benefit in reducing the global burden of hypertension.

More
© Text is available under the terms and conditions of the Creative Commons Attribution (CC BY) license (http://creativecommons.org/licenses/by/4.0/)
Upload a video for this entry
Information
Subjects: Pharmacology & Pharmacy
Contributor MDPI registered users' name will be linked to their SciProfiles pages. To register with us, please refer to https://encyclopedia.pub/register :
You-Lin Tain
View Times: 82
Revisions: 4 times (View History)
Update Time: 11 Jun 2021
Table of Contents
1000/1000
Hot Most Recent