Submitted Successfully!
Thank you for your contribution! You can also upload a video entry related to this topic through the link below:
https://encyclopedia.pub/user/video_add?id=10690
Check Note
2000/2000
The Photosynthetic Apparatus of Plants
Edit
Upload a video
This entry is adapted from 10.3390/molecules26113378

Chlorophylls together with carotenoids, serve, noncovalently bound to specific apoproteins, as principal light-harvesting and energy-transforming pigments in oxygenic photosynthetic organisms, including plants.

(Bacterio)chlorophylls, (B)Chls, being noncovalently bound to specific apoproteins, together with metal-free (bacterio)pheophytins, (B)Pheo, are the principle photochemically active pigments in photosynthetic organisms. Excitation energy arriving at the lowest singlet excited state (S1) of special (B)Chls in the photochemical reaction centers (RCs) eventually leads to primary charge separation, converting light energy into electrochemical energy. These processes ultimately provide the energetic basis for the life of both, photosynthetic and also heterotrophic organisms [1]. The vast majority of (B)Chls act as (accessory) light-harvesting pigments, increasing the optical cross sections of the photochemical RCs by about two orders of magnitude and more [2].
In all oxygen-evolving photosynthetic organisms, Chls a functions as a primary electron donors in the RCs of both, photosystem I and II (PSI and PSII). Moreover, a Chl a is also the primary electron acceptor in PSI. In higher plants (and green algae), Chls a and b serve as the major antenna pigments in light-harvesting complexes (LHCs). Chl b is found only in the LHCs of higher plants and green algae, with most Chl b bound to the main light-harvesting complex (LHCII).
In addition to Chls, oxygenic photosynthetic LHCs bind carotenoids. In plants and algae, peripheral LHCs bind xanthophylls (oxygen-containing derivatives of carotenes). Plant core-antenna complexes of both, PSI and II contain ß-carotenes. Carotenoids have unique photophysical features that render their spectroscopic investigation, in particular in vivo, rather difficult. Conventionally, carotenoid excited states are assigned due to an assumed C2h symmetry (in analogy to linear polyenes). However, very recent studies have suggested that the underlying assumptions may not apply to carotenoids, in particular to the optically “dark” first excited singlet state (S1) [3].
Structures of Chl a and violaxanthin (as representatives of their molecule classes), as well as the corresponding absorption spectra and energy levels, are shown in Figure 1. In spite of the vast taxonomic diversity of photosynthetic organisms, the mechanisms of the primary photochemical reactions performed by (B)Chls and the other associated cofactors in the RCs are very similar, while—in marked contrast—both the structures of LHCs and the bound pigments exhibit a remarkable variety.

Figure 1. Molecular structures and absorption spectra of chlorophyll a (left) and the carotenoid (xanthophyll) violaxanthin (right) as representatives of their respective molecule classes, as well as the corresponding energy level schemes.

2. The Photosynthetic Apparatus of Plants

Photosynthetic electron transport in all oxygenic photosynthetic organisms is driven by two light reactions, each taking place in two membrane-integral multimeric pigment-protein super complexes referred to as PSI and PSII. Higher plant thylakoid membranes are characterized by distinct regions: (i) the loose lamellar stroma thylakoids and (ii) the tightly stacked grana. The grana stacks are highly enriched in PSII. PSI super complexes are mainly found in the stroma-thylakoid regions [4]. These structures are, however, highly dynamic and undergo changes on different time scales, see, e.g., [5].
Pigment-protein complexes acting as LHCs absorb photons and effectively transfer the electronic excitation energy in a series of ultrafast steps (on the order of less than 100 femtoseconds up to several picoseconds [6]), with the excitons eventually arriving at the RCs.
RC-Chls, are usually characterized by red-shifted, i.e., lower energy absorption maxima as compared to antenna pigments, act as traps for the excitation energy and are the photochemically active pigments in the subsequent charge separation processes (cf. [7]). Based on structural and functional similarities of the RCs of anoxygenic photosynthetic bacteria, “special pairs” of Chls were inferred to act as primary electron donors (termed according to their specific absorption maxima, P680 in PSII or P700 in PSI). This conventional view has to be revised due to recent spectroscopic studies [8][9][10][11]. In fact, four Chl a molecules in PSII appear to be strongly excitonically coupled, with the lowest exciton state being predominantly localized on the monomeric ChlD1, which probably functions as the primary electron donor to PheoD1 as the acceptor. This step is followed by rapid electron transfer from the “special pair” PD1PD2 to Chl

[12]. Analogously, also in PSI, Chl a was shown to act as the primary electron donor, which transfers an electron onto another Chl a (denoted A0) as the acceptor. Subsequently, the “special pair” P700 (actually being a heterodimer of Chl a and a Chl a’, its C13 epimer) is rapidly oxidized [9][13].
Electron transport from PSII to PSI is coupled with proton translocation from the stroma into the thylakoid inner (luminal) space which gives rise to a difference of the proton electrochemical potential across the membrane. The resulting proton motive force is used to synthesize ATP [14][15]; for a review, see, e.g., [16]. Moreover, the acidification of the thylakoidal lumen, i.e., ΔpH formation, is also important for the regulation of light harvesting in PSII and interphotosystem electron transport (see below).

In plants and green algae, the peripheral antenna systems of both, PSI and PSII are made up from a large family of light-harvesting Chl a/b-binding LHC proteins encoded by the lhca and lhcb gene families, respectively. Three major types of peripheral Chl a/b-binding LHCs can be distinguished in higher plants [17].
LHCII is the main antenna complex, comprising about half of the thylakoid protein and binding roughly 50% of the Chls (on Earth). LHCII forms homo- and heterotrimers of three members of the protein superfamily, Lhcb1, Lhcb2 and Lhcb3. LHCII can also be associated with PSI. This would be the case, in particular, following so-called state 1-state 2 transitions [18].
The monomeric minor LHCs of PSII are formed by the Lhcb4–6 proteins (also termed CP29, CP26 and CP24, respectively, according to their apparent molecular weights), with one copy of each located proximal to the PSII core complex. Recently, structures of PSII mega complexes, including a part of the more tightly associated proximal LHCs, have become available [19].
The peripheral antenna proteins of PSI are designated Lhca1–4. One copy of each of these proteins is arranged in a single layer around the PSI core under all physiological conditions. Lhca1 and Lhca4 apparently form a heterodimer, which gives rise to the characteristic long-wavelength fluorescence emission of plant PSI at low temperatures [20][21][22].
The structure of LHCII (Figure 2) has been obtained to atomic (2.72 and 2.5 Å) resolution by X-ray crystallography [23][24].

Figure 2. (A) Structure of trimeric main light-harvesting complex (LHC II) of plants at 2.5 Å resolution, PDB entry 2BHW [24]. Top view with regard to the thylakoid membrane plane, from the stromal side. (B) Monomeric subunit. The protein backbone consisting of three transmembrane α-helical domains is shown in grey. The monomeric subunit noncovalently binds 8 chlorophylls a and 6 chlorophylls b (shown in cyan and green, respectively) as well as two luteins (yellow), one neoxanthin (orange) and one violaxanthin (red). The binding site of the latter may also be occupied by its de-epoxidation products, antheraxanthin or zeaxanthin.
The LHCII monomeric subunit is thought to provide a general structural model for all Chl a/b-binding proteins. Homologous LHC proteins from different plant species exhibit high (up to 90%) similarity, in particular among angiosperms. Differences among the various members of this protein family can be more substantial (up to 65% identity). All LHCs feature three membrane-spanning α-helices, see Figure 2. The evolutionary-related first and the third helices and their N-terminal regions exhibit particularly significant homologies.
Fourteen Chl molecules (eight Chls a and six Chls b) and four xanthophylls (two luteins, one neoxanthin and one xanthophyll-cycle pigment; either violaxanthin, antheraxanthin or zeaxanthin), are noncovalently bound to each monomeric subunit of LHCII, see Figure 2 [23][24]. The Chl molecules are positioned to optimize EET within one subunit as well as between the complexes [25]. Their chlorin rings are arranged roughly perpendicular to the membrane plane in two layers, close to each surface of the membrane. Some Chl a molecules are in intimate contact with xanthophylls providing photoprotection, see also below [24][26]. EET between LHCII trimers is facilitated by strongly excitonically coupled Chls, constituting the so-called long(est) wavelength-absorbing terminal emitter(s) at the periphery [25], thus facilitating rapid migration of excitons in the antenna systems.

The PSII of all oxygenic photosynthetic organisms contains two core antenna complexes (Figure 3), designated as CP43 and CP47, due to their apparent molecular weights. These proteins are members of an extended protein family [27]. All members of this protein family are characterized by six membrane-spanning α-helical domains (Figure 3). Furthermore, both CP43 and CP47 exhibit large loops at the lumenal side, which are essential for the stabilization of a functional water oxidizing complex (WOC) [28]. CP43 apparently binds 13 Chls a and ~3–5 β-carotenes, and CP47 binds 16 Chls a and ~4 β-carotenes. The D1 and D2 polypeptides, each forming five transmembrane helices, provide the matrix for noncovalent binding of all cofactors related to light induced charge separation and electron transport in the proper RC of PSII. Thus, the complex CP43/D1/D2/CP47 has a total of 22 membrane-spanning helices (cf. Figure 3).

Figure 3. Structure of the photosystem II core with the core-antenna complexes CP43 and CP47 from the thermophilic cyanobacterium Thermosynecchococcus vulcanus at 1.9 Å resolution, PDB entry 3ARC [29]. (A) Top view with regard to the thylakoid membrane plane, seen from the stromal side. (B) Side view with regard to the thylakoid membrane plane. The protein backbone of CP43 (CP47) is shown in red (yellow); other protein subunits are shown in grey. Chlorophylls a are shown in cyan, β-carotenes in orange, pheophytin in brown, heme groups in dark red and benzoquinones in grey. The oxygen–manganese cluster of the water splitting apparatus is also shown (violet).
The situation is different in PSI, where both antenna pigments and all cofactors for electron transport are bound to a heterodimer of the polypeptides PsaA and PsaB, each having 11 membrane spanning helices (Figure 4). In PSI, the core antenna(e) can be considered to be “fused” to the RC. A monomer of the PSI core binds 96 Chls a (and 22 carotenoids) [30]. Previously it was assumed that all the carotenoids in the cores of PSI and PSII are β-carotenes; however, recent data indicate that other carotenoids (the xanthophylls zeaxanthin, canthaxanthin, echinenone) also occur, possibly with specific functions [31]. Interestingly, carotenoids in PSI are close to clusters of Chls a which may constitute as the so called “red Chls”, due to their redshifted absorption as compared to P700 (some of which have been assigned to specific sites in the structure, see, e.g., [32]). 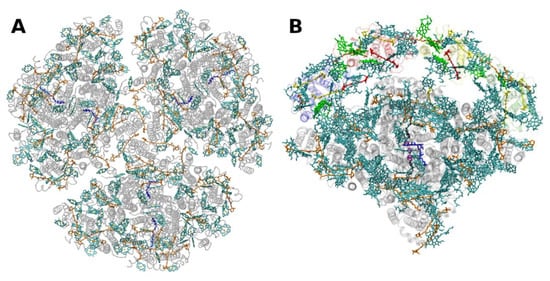 More
© Text is available under the terms and conditions of the Creative Commons Attribution (CC BY) license (http://creativecommons.org/licenses/by/4.0/)
Upload a video for this entry
Information
Subjects: Plant Sciences
Contributor MDPI registered users' name will be linked to their SciProfiles pages. To register with us, please refer to https://encyclopedia.pub/register :
Heiko Lokstein
View Times: 604
Revisions: 2 times (View History)
Update Time: 10 Jun 2021
Table of Contents
1000/1000
Hot Most Recent