Submitted Successfully!
Thank you for your contribution! You can also upload a video entry related to this topic through the link below:
https://encyclopedia.pub/user/video_add?id=10647
Check Note
Surinder M Soond 2021-06-16 09:38:05
2000/2000
Tumor Immune Microenvironment in MPM
Edit
Upload a video
This entry is adapted from 10.3390/cancers13112564

Malignant pleural mesothelioma (MPM) is a rare and highly aggressive disease that arises from pleural mesothelial cells, characterized by a median survival of approximately 13–15 months after diagnosis. The primary cause of this disease is asbestos exposure and the main issues associated with it are late diagnosis and lack of effective therapies. Asbestos-induced cellular damage is associated with the generation of an inflammatory microenvironment that influences and supports tumor growth, possibly in association with patients’ genetic predisposition and tumor genomic profile. The chronic inflammatory response to asbestos fibers leads to a unique tumor immune microenvironment (TIME) composed of a heterogeneous mixture of stromal, endothelial, and immune cells, and relative composition and interaction among them is suggested to bear prognostic and therapeutic implications. TIME in MPM is known to be constituted by immunosuppressive cells, such as type 2 tumor-associated macrophages and T regulatory lymphocytes, plus the expression of several immunosuppressive factors, such as tumor-associated PD-L1. Several studies in recent years have contributed to achieve a greater understanding of the pathogenetic mechanisms in tumor development and pathobiology of TIME, that opens the way to new therapeutic strategies. The study of TIME is fundamental in identifying appropriate prognostic and predictive tissue biomarkers. In the present review, we summarize the current knowledge about the pathological characterization of TIME in MPM.

Malignant pleural mesothelioma (MPM) is a rare and highly aggressive disease arising from pleural mesothelial cells. The recognized risk factors of MPM are asbestos, radiation exposure, genetic mutations, and the exposition to Simian Virus 40, but asbestos is certainly the most relevant and most well-known cause [1]. The overall prognosis of advanced stage MPM is poor, with a median survival of less than 15 months [2]. MPM consists of three histological variants: epithelioid (~60% of mesotheliomas), sarcomatoid, characterized by spindle cell morphology (~20% of mesotheliomas), and biphasic, which presents both epithelioid and sarcomatoid features (~20% of mesotheliomas) [3]. Diagnosis of MPM relies on an integration of clinical, radiological, and pathological findings, with histological examination being the mainstay for diagnosis and prognostication [4][5]. Since MPM is diagnosed in advanced stage in the majority of cases, the standard of care consists in systemic chemotherapy. However, the standard combination of cisplatin and pemetrexed chemotherapy agents [6] prolongs the median survival time by approximately 3 months only [7]. In the last years, genetic studies on MPM reported a low prevalence of oncogene driver mutations and low tumor mutational burden, but frequent copy-number losses and recurrent somatic mutations in oncosuppressor genes such as BAP1, NF2, and CDKN2A [8][9][10][11][12][13]. Unfortunately, no targeted therapies exploiting these alterations have emerged.
The etiopathogenetic evolution of MPM is mostly due to the generation of a tumor immune microenvironment (TIME) as a consequence of asbestos-induced damage, that may support tumor growth, possibly in association to genetic predisposition [14][15]. Over time, chronic inflammation determines an increased production of free radicals and reactive oxygen species by inflammatory cells and/or an alteration of immunocompetent cells, resulting in a reduction of tumor immunity [16].
The unique role of TIME in MPM development and progression still needs an accurate characterization in terms of infiltrating cell types, expression of co-inhibitory molecules, and activation of immune pathways (e.g., INFγ). As histological examination remains the gold standard in the diagnosis of MPM, the characterization of TIME could be crucial to visualize all cellular components and achieve a better understanding of the disease. Despite the different biological and clinical features between pleural and peritoneal mesothelioma [17], the presence of tertiary lymphoid structures (TLS) as a component of the host immune response was highlighted in epithelioid peritoneal mesothelioma (EMPM), as well. However, no association between TLS-EMPM and different oncological outcomes was found, thus suggesting that TLS would reflect an indirect mechanism of therapy resistance to drugs in EMPM as in its pleural counterpart [18].
Given the role of TIME in MPM, the use of immune checkpoint inhibition treatment has the rationale to provide new potential therapeutic opportunities. Indeed, the combination of monoclonal antibodies directed against programmed cell death protein 1 (PD-1) and cytotoxic T-lymphocyte-associated protein 4 (CTLA-4) recently showed its superiority over platinum-pemetrexed chemotherapy in a phase 3 trial [19]. Notably, a greater benefit was observed in biphasic/sarcomatoid MPM. Moreover, single-agent anti-PD-1 therapy demonstrated to significantly increase survival as compared to best supportive care in platinum pre-treated patients [20].
Another novel potential treatment in MPM is cell therapy. Clinical trials using CAR-T cells in MPM have shown that this potential therapy is relatively safe, but efficacy remains modest, likely due to the strong immunosuppressive conditions in MPM microenvironment [21][22]. Furthermore, preclinical studies are ongoing in a bimodal treatment approach consisting of dendritic cell (DC) vaccination to prime tumor-specific T cells, a strategy to reprogram the desmoplastic microenvironment in mesothelioma and pancreatic cancer [23].
The most adequate tissue specimens for MPM pathological characterization derive from video-assisted thoracoscopic (VATS) biopsies or pleurectomies, which are the recommended samples for complete histological diagnosis [2][3][7]. The availability of large amounts of tissue allows both the definition of histological tumor features and immune cells’ spatial distribution on routine hematoxylin-eosin slide. On these specimens, the cheapest and fastest tool used for pathological characterization studies is immunohistochemistry (IHC), that allows to visualize both tumor cells and microenvironment components, according to their immunophenotype and biomarker expression (Figure 1). Despite its advantages, a limitation of chromogen-based IHC analysis is the impossibility of using more than one or two markers per slide. Novel and innovative multiplex immunophenotyping techniques are in development to deeply analyze as a whole both the spatial distribution and immunophenotypic interaction of each single cell subtype [24][25][26]. 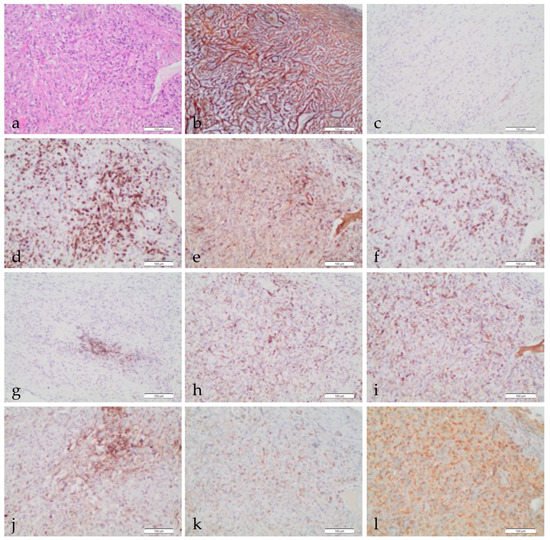 TIME is a complex and heterogeneous mixture of stromal, endothelial, and immune cells admixed in a connective matrix and its composition differs among individuals and histological types. In fact, studies suggest that TIME profoundly differs between epithelioid and non-epithelioid pleural mesotheliomas: the former typically have an immune-activated TIME with greater proportion of plasmacytoid dendritic cells (DC), CD20+ B cells, CD4+ helper T cells, and exhausted CD8+ tumor-infiltrating lymphocytes (TILs), whereas non-epithelioid mesotheliomas have a TIME with a larger proportion of macrophages, regulatory T cells, mesothelioma stem cells, and neutrophils [27].
In past years, the prognostic and predictive role of TIME in MPM was investigated mainly on small and heterogeneous series, with no conclusive data due to difficulties in MPM microenvironment characterization [28][29]. Moreover, qualitative and quantitative changes in tumor/stroma ratio may produce a dramatic rewiring in the MPM-infiltrating immune cell subsets [30].
Increasing evidence suggests that analysis of gene expression or copy numbers in cancer samples helps to understand immune cell infiltration into the tumor ME. Yoshihara et al., by means of transcription profiling, have developed the ESTIMATE algorithm (Estimation of STromal and Immune cells in MAlignant Tumor tissues using Expression data) to analyze the stromal and immune infiltration associated to tumor cellularity in cancer samples [31]. Using gene expression data, a ‘stromal signature’, that describes the presence of stroma in tumor tissue, and an ‘immune signature’, that represents the infiltration of immune cells, were identified. Recently, the ESTIMATE algorithm was applied to MPM samples and the involvement of 14 immune/stromal-related genes was found to have significant prognostic potential. In silico analyses revealed that all these genes are involved in immune responses and may predict the survival of patients with MPM, playing also a role as biomarkers of the sensitivity to immunotherapy [32].
Additionally, Lee and coworkers, using mass spectrometry and comprehensive analysis of intra-tumoral immune system, described a distinct immunogenic TIME signature which was associated with favorable OS and response to checkpoint blockade [33]. The importance of understanding TIME of different MPM histotypes in relation to hypo-fractionated radiation therapy response was recently demonstrated as well [27].

The prognosis of MPM is best explained by a continuous model, which shows specific expression patterns of genes involved in angiogenesis and immune response [34]. Asbestos fibers have a direct effect on mesothelial cells, causing the release, together with inflammatory cytokines, of vascular endothelial growth factor (VEGF), which attracts leukocytes [35]. VEGF signaling is crucial in MPM pathophysiology [36], regulating blood vessel function, inducing tumor cell growth, and suppressing immune activation [37]. VEGF also acts as a powerful mitogen for mesothelial cells themselves. Indeed, MPM cell lines secrete VEGF-A and VEGF-C, as well as expressing both VEGF receptors Flt-1 (VEGF-R1) and KDR (VEGFR-2) [38][39]. Thus, VEGF signaling can induce MPM cell growth in an autocrine fashion. This may explain why mesothelioma cells show striking sensitivity to anti-VEGF agents, in addition to the more canonical role of such agents in inhibiting neo-angiogenesis. Moreover, MPM has been shown to produce the highest levels of VEGF among solid tumors [40].
Other growth factors can also regulate migration, survival, and differentiation of endothelial cells, contributing to neoangiogenesis, such as TGFb, EGF, angiogenin, IL-8, and platelet-derived growth factor (PDGF) [41]. All this evidence provides the rationale for the development of VEGF and angiogenesis inhibitors as a therapeutic strategy in MPM [42].
Although there has been over a decade of intense investigation, there are still no validated biomarkers of angiogenesis able to predict the efficacy of anti-angiogenic agents both in MPM and in other cancers [43]. The complementary LUME-Meso biomarker study has reviewed the plasma levels of 58 angiogenic factors and single-nucleotide polymorphisms (SNPs) in genes for VEGFR1 (FLT1), and VEGFR3 (FLT4) and mesothelin (MSLN), and assessed micro-vessel density via CD31 immunohistochemistry on archival biopsy samples. Although PFS and OS benefits were observed in patients with low plasma endoglin and homozygous VEGFR1/3 genotypes, no biomarkers showed any significant and conclusive association with antiangiogenic efficacy [44].
Recently, Chia and coworkers evaluated VEGF, PDGF, FGFR, and CD31 by immunohistochemistry in tissue microarrays from 329 patients who underwent surgical resection or biopsy for MPM. They found that high CD31 density and high PDGF expression levels were associated with poor prognosis in the epithelioid MPM group [45].

TIME is a challenging component with an emerging pathogenic, immunomodulatory, and growth-promoting role in MPM. Given the relatively low mutational burden of MPM, biological events other than genetics may be critical determinants of MPM growth and aggressiveness and could influence cells’ immune-escape.

A greater understanding of infiltrating immune cells, their role and function, and the presence of ligand or modulatory marker expression will give a wider and better structured picture of the tumor–immune cell interplay.

More
© Text is available under the terms and conditions of the Creative Commons Attribution (CC BY) license (http://creativecommons.org/licenses/by/4.0/)
Upload a video for this entry
Information
Subjects: Oncology
Contributor MDPI registered users' name will be linked to their SciProfiles pages. To register with us, please refer to https://encyclopedia.pub/register :
Luisella Righi
View Times: 66
Revisions: 2 times (View History)
Update Time: 23 Jun 2021
Table of Contents
1000/1000
Hot Most Recent