Submitted Successfully!
Thank you for your contribution! You can also upload a video entry related to this topic through the link below:
https://encyclopedia.pub/user/video_add?id=10580
Check Note
2000/2000
BTK Targeting in Multiple Myeloma
Edit
This entry is adapted from 10.3390/ijms22115707

Multiple myeloma (MM), a clonal plasma cell disorder, disrupts the bones’ hematopoiesis and microenvironment homeostasis and ability to mediate an immune response against malignant clones. Despite prominent survival improvement with newer treatment modalities since the 2000s, MM is still considered a non-curable disease. Patients experience disease recurrence episodes with clonal evolution, and with each relapse disease comes back with a more aggressive phenotype. Bruton’s Tyrosine Kinase (BTK) has been a major target for B cell clonal disorders and its role in clonal plasma cell disorders is under active investigation. BTK is a cytosolic kinase which plays a major role in the immune system and its related malignancies. The BTK pathway has been shown to provide survival for malignant clone and multiple myeloma stem cells (MMSCs). BTK also regulates the malignant clones’ interaction with the bone marrow microenvironment. Hence, BTK inhibition is a promising therapeutic strategy for MM patients

Multiple myeloma (MM) is clonal proliferation of malignant plasma cells in the bone marrow microenvironment (BMM), and it accounts for approximately 1% of all neoplastic diseases and 15% of all blood cancers, making it the second most common hematological malignancy after lymphoma [1][2]. There have been substantial changes in the treatment of MM during the last 20 years and those changes increased the five-year survival rates for patients from 12% to 54% (SEER data. Cancer Statistic Review 1975–2016. National Cancer Institute 2019).
Plasma cells reside in the bone marrow where they normally comprise 0.25% of mononuclear cells, but in MM, monoclonal plasma cells accumulate and alter the BMM. This accumulation leads to disruptions in bone remodeling compartments, increased lytic activity, impaired cellular immunity and angiogenesis [3]. Historically, due to the rarity of plasma cells, their production and biology have been poorly understood. However, recent advances in the field have led to the identification of numerous potential therapeutic targets for MM [3]. These treatment modalities include combinations of proteasome inhibitors (PI), immunomodulatory drugs (IMIDs), alkylating agents, monoclonal antibodies (i.e., anti-CD38 and anti-SLAMF7), histone deacetylase inhibitors, B cell maturation antigen (BCMA) targeted drug-antibody conjugate, autologous stem cell transplantation (ASCT) and most recently BCMA targeting CAR-T cells. In spite of recent progress in the development of new and increasingly effective agents, MM remains incurable, mostly due to the evolution of drug-resistant clones [4]. Drug resistance of MM has been shown to be mediated through several mechanisms including loss of CD38 expression, BCMA expression, proteasome subunit β type 5 (PSMB5) point mutation or overexpression, and Cereblon (CRNB) down regulation, all of which help to produce MM stem-like cells (MMSCs). Therefore, successful alternative treatments of the stem-cell-like phenotypes is a critical focus in MM research moving forward [5][6].
Examining the molecular mechanisms of how the aggressive and drug resistant myeloma cells interact with the supporting stroma can allow for better patient tailored clinical management through targeting and disrupting the tumors’ protective niche [6].

Protein kinases (PTKs) act like a person flipping a molecular switch to control whether proteins are turned on or off. Kinases accomplish this by facilitating the transfer of a phosphate group from ATP to either a serine, threonine or tyrosine residue of their target protein [7][8]. BTK is one of the five Tec family kinases, a group of cytosolic kinases that phosphorylate tyrosine residues. The other four Tec family kinases include: Txk/Rlk, Itk/Emt/Tsk, Bmx and Tec, the enzyme which the family was named after [9]. The Tec family of kinases are one branch of the Src module kinases that mediate an array of cellular signaling processes. The other Src module kinases include ABL, CSK, FRK and BRK families [8].
Structurally, the SRC root module that the Tec family of kinases stem from consists of a single polypeptide chain comprising an SH3 and an SH2 domain. The SH2 domain is connected by an SH2-kinase linker to the kinase domain (AKA; SH1 domain), which is ultimately responsible for catalytic activity [8]. In BTK’s inactive state, the SH2 and SH3 domains impinge upon the kinase domain, thereby stabilizing inactivity and providing allosteric control over the catalytic site. The hallmark feature of the Tec family kinases that differentiates them from their relative kinases is the presence of the amino terminal Pleckstrin Homology (PH) domain that also confers allosteric control by further stabilizing the inactive conformation [9]. Following the amino PH domain is a proline-rich Tec homology (TH) domain, followed by the Src domains SH3, SH2 and the carbonyl SH1 domain [7] (Figure 1). 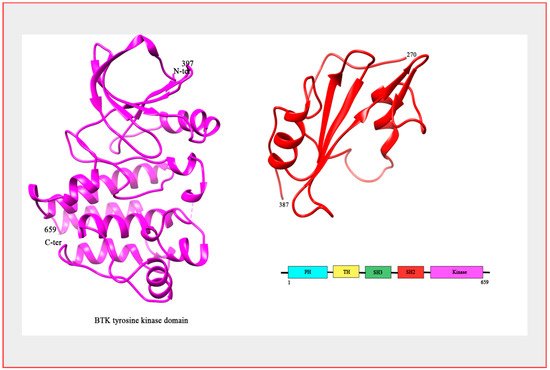 Figure 1. Structure of BTK. The crystal structure of BTK kinase domain (colored magenta; PDB: 3GEN) and SH2 domain (colored red; PDB: 2GE9). Bar Diagram representing the domain organization of the BTK protein.
Genetically, BTK has been shown in humans to be on the long q arm of the X chromosome at location Xq22.3-q22. The gene encompasses 37.5 kb, contains 19 exons and is expressed in all hematopoietic cells with the exception of T cells and possibly plasma cells [10]. Loss of the X chromosome has been reported in MM; however, these cases are leading to monosomy in females, therefore complete loss of BTK coding does not occur. There is little data supporting amplification of the BTK coding portions of the X chromosome in MM.
BTK is primarily cytosolic but can be recruited to the cell membrane due to interactions with its PH domain. The PH domain confers the ability to bind to phosphoinositides, thereby merging the tyrosine kinase and the phospholipid signaling systems [9][11]. BTK activation has been shown to be directly linked to its initial membrane recruitment and subsequent phosphorylation. Following its recruitment to the membrane, BTK activation occurs in two steps. Step one is the trans-phosphorylation of BTK on tyrosine residue at position 551 (Y551) in the kinase domain by either Lyn, SYK or other Src family kinases [12]. This first step is thought to be responsible for the enzymes’ catalytic ability and consequently results in the second step, autophosphorylation of tyrosine at position 223 (Y223) in the SH3 domain [13]. The Y223 position of the SH3 domain is highly conserved among signaling proteins and is thought to lie in the surface of the ligand-binding groove, which implies that this autophosphorylation may play a role in protein-protein interactions as well as stabilizing the active form, although the extent of these interactions is not fully understood [7][13].
BTK activation can occur through other Src kinases but is primarily regulated by its transient recruitment to the cell membrane through the canonical PH-TH module with phosphatidylinositol (3,4,5)-trisphosphate (PIP3) membrane lipids and subsequent phosphorylation. Little is known about the structural mechanism of this membrane interaction. However, recent simulations suggest that PIP3 acts as a regulator of BTK activity as it controls PH-TH Saraste dimerization within the cell membrane, which may be an important step in enzymatic activation [13][14][15]. BTK catalytic activity and tyrosine phosphorylation increases in response to cross linking or stimulation of the sIGM complex, the IL-5 or IL-6 receptors of B cells and the IgE receptor of mast cells, all of which are over expressed in MM patients. BTK activation then triggers activation of protein kinase B (AKT), phospholipase c (PLC) and calcium mobilization, leading to increased downstream effects including proliferation, differentiation and cell survival. Thus, chronic activation of BTK through the tyrosine kinase or phospholipid signaling systems can be a key driver in several neoplastic malignancies and a valuable therapeutic target in many more [16].

3. BTK as a Potential Target in Malignancies

The phosphorylation of proteins is by far the most common form of reversible post-translational modifications that modulate the activity of biochemical signaling pathways in humans [17]. The PTKs alter specific substrate activity and/or interactions with other proteins and are a fundamental method of controlling the cell cycle. PTK inhibition (PTKi) has proven to be an effective and accessible way to favorably alter the cellular signaling underlying hundreds of pathologies, including cancer [7][17]. This is largely due to the abnormal activation and dysregulation of these kinase mediated pathways which act as driving forces in many malignancies. In cancer cells, this abnormal activation can lead to increases in proliferation, stemness, survival, migration, motility and metabolism, all of which are associated with less favorable outcomes in patients [7].
The BTK pathway is universal in blood cells, as its signaling molecules are expressed in all hematopoietic lineages [18]. BTK in particular plays a crucial role in the development of peripheral B-cells as well as the survival of leukemic cells and their interaction with the BMM [7][19]. BTK is located in the cytoplasm of B-cells and is required for proper B-lymphocyte development, differentiation and signaling [11]. When the gene encoding BTK is mutated, a condition called X chromosome-linked agammaglobulinemia (XLA) results. This condition is characterized by minimal B cell populations and ultimately results from altered B cell receptor (BCR) signaling and high rates of apoptosis. Clinically, patients with XLA exhibit impaired immune function, reductions in all classes of serum immunoglobulins, markedly reduced B cell lymphocytes populations, severe neutropenia, and an inability to make antibodies in response to vaccines and repetitive bacterial infections that onset several months after infancy [20]. Due to this relation, the kinase itself is named after the Pediatrician Ogden Bruton, who reported the first case of XLA in 1952 (Figure 2) [21]. 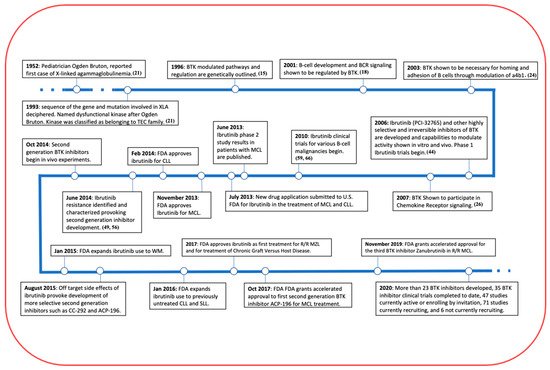 Figure 2. A Timeline of BTK and its inhibitor. BTK has made remarkable progress in the past 10 years in its treatment in a variety of B cell related malignancies and even more clinical trials are underway, including some in MM.
BTK plays an important role in various blood cell signaling pathways besides BCR signaling, including chemokine receptor 4 (CXCR4) signaling, toll-like receptor (TLR) signaling and Fc receptor signaling. Many of these signaling pathways result in common downstream effects due to the activation of BTK. For instance, BCR and CXCR4 activation of BTK have both been implicated to be important in controlling the adhesion of vascular cell adhesion proteins (VCAM) [7][22]. A comprehensive outline of how BTK interacts in each of these pathways and the implications it has in neoplasm is provided below.
B Cell Receptor Signaling: Due to BTK’s causal role in the B cell disorder XLA, the most thoroughly understood pathway which it mediates is B Cell Receptor (BCR) signaling [7]. In the germinal center, BCR, TLR and CD40 signaling are recognized as playing a fundamental role in the differentiation of B cells to plasma cells. After activation of B cells through BCR, TLR and/or CD40, upregulation of interferon regulatory factor 4 (IRF4) expression and downregulation of B-Cell Lymphoma 6 (BCL-6) expression occurs in addition to a loss of PR/Set Domain 1 (PRDM1) repression, resulting in down regulation of Paired Box 5 (PAX5) gene and upregulation of X-Box Binding Protein 1 (XBP1) and ultimately resulting in a loss of the B cell gene activation and phenotype. Furthermore, in the centrocyte region, stimulation of Interleukin 10, 21 or 6 (IL-10, IL-21 or IL-6) results in signal transducer and activator of transcription 3 (STAT3) activation, yielding PRDM1 overexpression and hence the gain of the plasma cell phenotype (Figure 3) [3]. 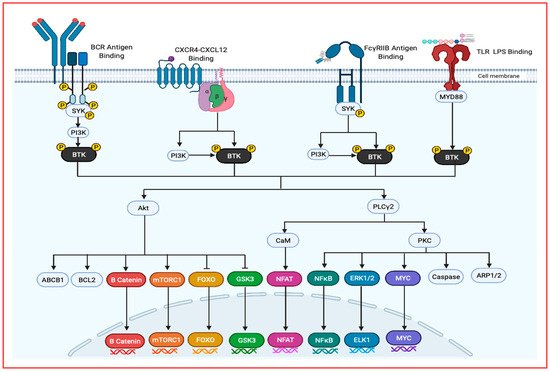 More
© Text is available under the terms and conditions of the Creative Commons Attribution (CC BY) license (http://creativecommons.org/licenses/by/4.0/)
Upload a video for this entry
Information
Subjects: Biochemistry & Molecular Biology
Contributor MDPI registered users' name will be linked to their SciProfiles pages. To register with us, please refer to https://encyclopedia.pub/register :
Tulin Budak-Alpdogan
View Times: 51
Revisions: 2 times (View History)
Update Time: 08 Jun 2021
Table of Contents
1000/1000
Hot Most Recent