Submitted Successfully!
Thank you for your contribution! You can also upload a video entry related to this topic through the link below:
https://encyclopedia.pub/user/video_add?id=10507
Check Note
2000/2000
CML-HMGB1 in Gastric Cancer
Edit
Upload a video
This entry is adapted from 10.3390/ijms22105185

Advanced glycation end products (AGEs) are produced in response to a high-glucose environment and oxidative stress and exacerbate various diseases. Nε-(Carboxymethyl)lysine (CML) is an AGE that is produced by the glycation of lysine residues of proteins.

Gastric cancer is the third leading cause of cancer deaths in Japan [1]. Early diagnosis and early endoscopic treatment have improved the 5-year survival rate of gastric cancer patients (73.1%) [2]. However, the 5-year survival rate for advanced gastric cancer still remains poor at 47.2 and 7.3% for stages III and IV, respectively [2]. Elucidation of the mechanism of acquisition of malignant phenotypes is expected to lead to the development of novel treatments.
Taguchi et al. reported that high-mobility group box-1 (HMGB1) promotes the progression and metastasis of various cancer types [3]. We have previously reported the involvement of HMGB1 in malignancy in gastric, colorectal, prostate, and oral cancers [4][5][6][7][8][9]. Notably, the high expression of HMGB1 along with that of its receptor, i.e., receptor for advanced glycation end products (RAGE), correlates well with the progression of gastric cancer [4]. HMGB1 provides cancer cells’ proliferation, invasion, anti-apoptotic survival, and metastatic ability [10].
RAGE is a member of the immunoglobulin superfamily. It is a cell membrane receptor that has the ability to bind to multiple ligands, such as AGE, HMGB1, and S100B [11]. HMGB1 enhances oxidative stress by binding to RAGE via multiple pathways, such as mitogen-activated protein kinase, p21ras, nuclear factor (NF)-κB, AKT, phosphoinositide 3-kinase, and Wnt [12]. Importantly, RAGE also binds to AGE [13][14], which is generated at high levels in diabetes mellitus. AGE is involved in the development of complications, such as diabetic retinopathy, through RAGE activation [14][15]. We have previously reported that AGE promotes the development and progression of colorectal cancer [16][17]; it is also a risk factor for breast cancer [18].
Nε-(Carboxymethyl)lysine (CML) is an AGE produced by the glycation of lysine residues under physiological conditions [19]. Non-enzymatic glycation of proteins occurs through a wide range of processes, including condensation, rearrangement, fragmentation, and oxidation reactions, with Schiff bases and Amadori products as intermediates [20]. CML is one of the most abundant AGEs and correlates well with the total level of AGEs [21][22]. It has been reported that CML promotes cancer progression through RAGE in prostate, pancreatic, lung, and breast cancers [23][24][25][26][27]. HMGB1 is a 215-amino-acid-long protein that has a molecular weight of 30 kDa [28]. The HMGB1 protein possesses 44 lysine residues, which might serve as the target sites for the CML modification. We have previously reported that a high-glucose and high-fat diet increases HMGB1 levels in the colonic mucosa in a rat colon carcinogenesis model [29]. In the rats, the levels of mRNA and protein of HMGB1 were increased before forming aberrant crypt foci. In contrast, downregulation of HMGB1 inhibits cancer formation and reduces progression of the colorectal cancer [7][30][31]. Although HMGB1 has been suggested to be associated with hyperglycemic condition, glycation of HMGB1 remains poorly understood.

We investigated the formation of CML in cancer-related proteins after treating the human gastric cancer cell line TMK1 with glyoxal (GLX) or high-concentration glucose (GLC) (Figure 1A). The nuclear proteins HMGB1, mutant p53, and histone H4 were CML-modified by GLX and GLC treatment. Oxidative stress (read-out; 4-hyroxynonenal, 4-HNE) was increased in all the cell lines, especially TMK1 upon treatment with GLX and GLC (Figure 1B). HMGB1 concentrations in the culture medium increased in response to GLX and GLC treatment in all the cell lines, and was the highest in TMK1 (Figure 1C). GLX and GLC treatment increased the levels of CML-modified HMGB1 in the culture medium, which were higher in the culture media of TMK1 cells than in those of other cells (Figure 1D). These results suggest that CML-modified HMGB1 is extracellularly secreted. U937 is a macrophage cell line, which produces oxidative stresses as inflammatory responses. In U937 cells, GLC or GLX induced 4-HNE and total HMGB1, but CML-HMGB1 levels were lower than in gastric cancer cell lines (Figure 1B–D). 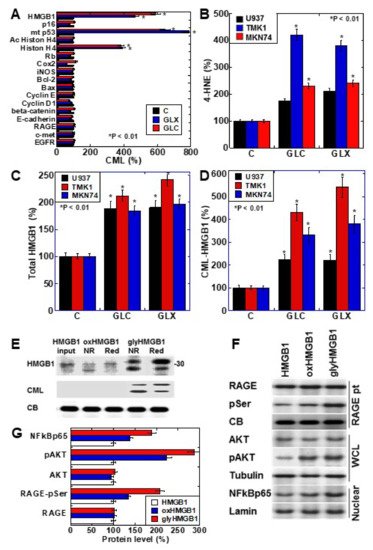 Figure 1. CML-HMGB1 formation in gastric cancer cells. (A) CML formation in various cancer-associated proteins was analyzed by antibody array using immunoprecipitant by anti-CML antibody of TMK-1 cell lysate, which was treated with GLX or GLC. The Scheme 100. (B) Oxidative stress levels in cells treated with GLX or GLC as measured by ELISA. (C) Total HMGB1 levels in cells treated with GLX or GLC as measured by ELISA. (D) CML-HMGB1 levels in cells treated with GLX or GLC measured by immunoprecipitation; immunoprecipitant by anti-CML antibody was detected by anti-HMGB1 antibody. (E) H2O2-treated HMGB1 (oxidized HMGB1) and GLX-treated HMGB1 (glycated HMGB1) were examined by Western blot analysis under non-reduced (NR) or reduced (Red) conditions. The membrane was re-probed with an anti-CML antibody (CML). (F) Alterations in HMGB1-associated intracellular signals in TMK-1 cells treated with naïve HMGB1 (10 μg/mL), oxidized HMGB1 (10 μg/mL), or glycated HMGB1 (10 μg/mL). (G) Semi-quantification of protein levels with standardization by CB, tubulin, or lamin. Phosphorylated RAGE (pSer) was examined by immunoprecipitation; RAGE precipitant was detected using an anti-pSer antibody. CB, tubulin, and lamin were used as the loading controls. Error bar and standard deviation calculated by ordinary analysis of variance from three independent experiments. CML, Nε-(Carboxymethyl)lysine; HMGB1, high-mobility group box-1; C, untreated control; GLX, glyoxal; GLC, glucose; RBP, retinol-binding protein; 4-HNE, 4-hydroxynonenal; NR, non-reduced condition; Red, reduced condition; CB, Coomassie blue; RAGE, receptor for advanced glycation end products; pSer, phosphorylated serine; pAKT, phosphorylated AKT; .NF-κB, nuclear factor-κB; RAGE pt, anti-RAGE antibody precipitant; WCL, whole cell lysate; Nuclear, nuclear fraction. * P < 0.01.
To further examine the properties of CML-HMGB1, recombinant human HMGB1 was treated with H2O2 and GLX to generate oxidized HMGB1 and glycated HMGB1, respectively (Figure 1E). Oxidized HMGB1 had higher mobility than naïve HMGB1, and under reducing conditions, the mobility of oxidized HMGB1 was similar to that of naïve HMGB1. The molecular weight of glycated HMGB1 was higher than that of naïve HMGB1; however, the mobility was lower under reducing conditions. This suggests that the SH group of HMGB1 is oxidized in glycated HMGB1. Furthermore, when the immunoblot membrane was re-probed with an anti-CML antibody after being probed with anti-HMGB1 antibody, CML was observed only in glycated HMGB1. These results indicate that HMGB1 undergoes CML modification by glycation.
Next, the effects of naïve HMGB1, oxidized HMGB1, and glycated HMGB1 on intracellular signals were examined (Figure 1F). The phosphorylation of RAGE and AKT, and the nuclear translocation of NF-κB, were more pronounced upon treatment with oxidized HMGB1 compared to those observed on treatment with naïve HMGB1; glycated HMGB1 resulted in more potent effects in this respect. Therefore, it was confirmed that glycated HMGB1 (CML-HMGB1) has a significant ability to activate intracellular signals.

CML formation occurred in a GLX concentration-dependent manner in TMK1 cells (Figure 2A). The DNA-binding ability of CML-HMGB1—produced by treating recombinant HMGB1 with GLX—was markedly decreased in comparison with that of HMGB1 (Figure 2B). Similarly, when the ability of HMGB1 to bind to histone H3 was examined (Figure 2C), a marked decrease was observed in the case of CML-HMGB1 compared to HMGB1. When TMK1 cells were treated with GLX, nuclear HMGB1 levels were reduced temporarily (Figure 2D). At this time, no significant changes were observed in HMGB1 in the cytoplasm (Figure 2E), but HMGB1 levels in the culture medium also increased (Figure 2F). These findings indicate that GLX deposited CML on nuclear HMGB1, following which the binding affinity of HMGB1 to DNA and histones in the nucleus was decreased, and HMGB1 was translocated outside the nucleus and secreted extracellularly. 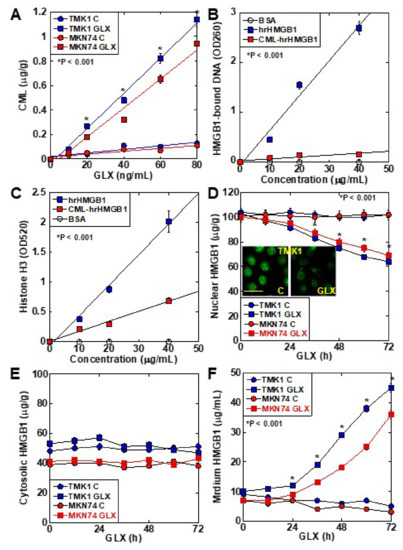 The role of CML-HMGB1 was compared to that of HMGB1 in the context of gastric cancer (Figure 3). First, both HMGB1 and CML-HMGB1 promoted the proliferation of TMK1 and MKN74 cell lines, but the effect of CML-HMGB1 was significantly more pronounced than that of HMGB1 (Figure 3A,B). In vitro invasion, sphere formation, and protection against thapsigargin-induced apoptosis were also promoted by HMGB1 and CML-HMGB1, but the effects were more pronounced with CML-HMGB1 (Figure 3C–E). In addition, 5-FU sensitivity (IC50) increased by 1.05-fold for HMGB1 and 1.3-fold for CML-HMGB1 in comparison with untreated TMK1 cells (Figure 3F). Thus, CML-HMGB1 exhibited a more significant tumor-promoting effect than HMGB1. 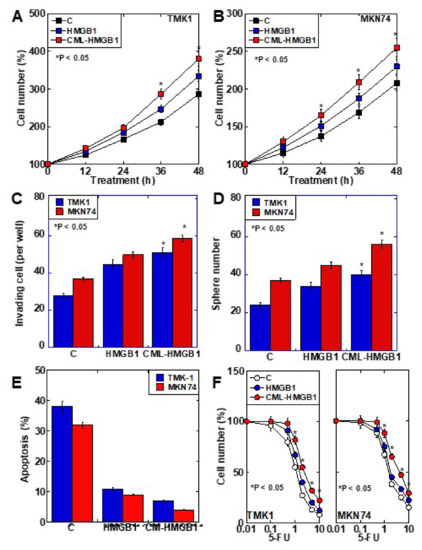 To examine the clinical significance of CML-HMGB1, the protein level of CML-HMGB1 was examined by Western blotting in 10 gastric cancer samples (Figure 4A). CML-HMGB1 was detected at various levels in all the samples. The protein levels of CML-HMGB1 and HMGB1 were semi-quantified and a correlation with clinicopathological parameters was investigated (Table 1). HMGB1 levels were correlated with T factor (primary tumor) and M factor (distant metastasis), whereas CML-HMGB1 levels were correlated with all T, N (nodal metastasis), and M factors, and stage. No correlation was found with grade for either CML-HMGB1 or HMGB1. 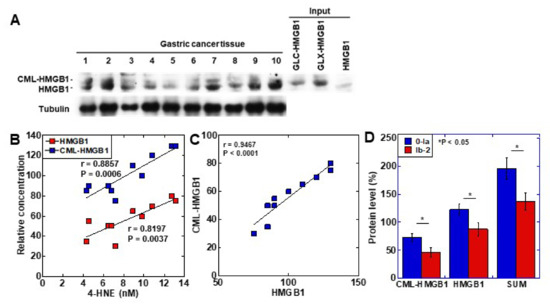 More
© Text is available under the terms and conditions of the Creative Commons Attribution (CC BY) license (http://creativecommons.org/licenses/by/4.0/)
Upload a video for this entry
Information
Subjects: Oncology
Contributor MDPI registered users' name will be linked to their SciProfiles pages. To register with us, please refer to https://encyclopedia.pub/register :
Hiroki Kuniyasu
View Times: 70
Revisions: 3 times (View History)
Update Time: 12 Oct 2021
Table of Contents
1000/1000
Hot Most Recent