Submitted Successfully!
Thank you for your contribution! You can also upload a video entry related to this topic through the link below:
https://encyclopedia.pub/user/video_add?id=10503
Check Note
2000/2000
Abyssomicins
Edit
Upload a video
This entry is adapted from 10.3390/md19060299

Abyssomicins represent a new family of polycyclic macrolactones. The first described compounds of the abyssomicin family were abyssomicin B, C, atrop-C, and D, produced by the marine actinomycete strain Verrucosispora maris AB-18-032, which was isolated from a sediment collected in the Sea of Japan. Among the described abyssomicins, only abyssomicin C and atrop-abyssomicin C show a high antibiotic activity against Gram-positive bacteria, including multi-resistant and vancomycin-resistant strains. The inhibitory activity is caused by a selective inhibition of the enzyme 4-amino-4-deoxychorismate synthase, which catalyzes the transformation of chorismate to para-aminobenzoic acid, an intermediate in the folic acid pathway.

An efficient search for new bioactive compounds, such as antibiotics, demands specific requirements:

First, there is a need for a massive set of taxonomically characterized and dereplicated microorganisms isolated from terrestrial and/or marine habitats, with a high potency of producing unique secondary metabolites. A representative example of such a source are members of the order Actinomycetales, which are known as potent producers of unique secondary metabolites. Second, there needs to be a specific target that is essential for a pathogenic organism but is not present in humans in order to provide selectivity in toxic effects. Third, highly efficient analytic equipment and techniques are required to identify novel secondary metabolites in the culture broth or extracts from mycelium and culture filtrate, such as the combination of HPLC with diode array detection and/or mass spectrometry and characterization employing a home-made or commercial database. One of our screening programs was focused on the inhibition of the chorismate pathway, taking over an idea of Emeritus Professor Hans Zähner, one of the pioneers in antibiotic research and chair of the Institute of Microbiology for over 30 years at the University of Tübingen, who retired in 1994. The chorismate pathway leads to the biosynthesis of the aromatic amino acids, and to the biosynthesis of para-aminobenzoic acid (pAba), an intermediate in the biosynthesis of folic acid. This pathway is present in plants, fungi, prokaryotes, and some parasites, such as Plasmodium and Toxoplasma, but it is not present in humans (Figure 1). The biosynthesis of pAba is catalyzed by two enzymes, 4-amino-4-deoxychorismic acid (ADC) synthase and ADC lyase, which were the target of our screening concept. 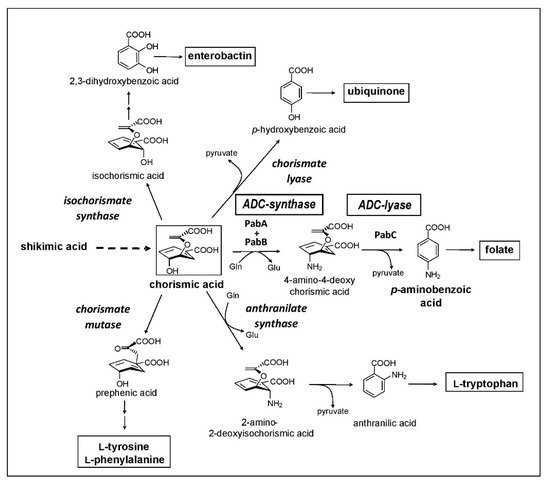 As promising candidates for the production of new secondary metabolites, we selected 201 characterized strains from our own collection and strains from my collaborators Alan T. Bull (University of Kent) and Michael Goodfellow (Newcastle University) belonging to the families Streptomycetaceae and Micromonosporaceae, and rare actinomycete genera, isolated both from terrestrial and marine habitats. Extracts were subjected to the screening assay based on a simple but highly selective agar plate diffusion assay. Only one extract obtained from strain AB-18-032, a marine isolate from a sediment collected from the Sea of Japan belonging to the family Micromonosporaceae, inhibited pAba biosynthesis selectively. The secondary metabolite pattern of the active extract was analyzed by HPLC-diode array, whereby three metabolites were characterized by our HPLC-UV-Vis Database as presumably new compounds, which we named abyssomicins.

The first announcement of abyssomicins was done two years later in 2003 in a patent application [1] because of their pharmacologically relevant properties which favored their application as promising therapeutics against infection diseases, especially of pathogenic multi-resistant Gram-positive bacteria, including vancomycin-resistant Staphylococcus aureus. Subsequently, we published the screening method, fermentation, isolation, and biological activities of abyssomicins and the taxonomy of the producing strain [2]. Structure elucidation of abyssomicins and their mode of action was done by the group of Roderich Süssmuth (Technical University Berlin) [3][4][5]. The complete characterization of strain AB-18-032 applying polyphasic taxonomy was done by the group of Michael Goodfellow (Newcastle University). Strain AB-18-032 was classified in the genus Verrucosispora as a new species and was named Verrucosispora maris sp. nov. as a type strain [6]. Investigations in the genetic analysis and description of the whole genome sequence of Verrucosispora maris AB-18-023 were done by the groups of Roderich Süssmuth and James E.M Stach (Newcastle University) [7][8]. The structures of the main compounds produced by Verrucosispora maris AB-18-023, abyssomicin C and atrop-abyssomicin C, are shown in Figure 2. 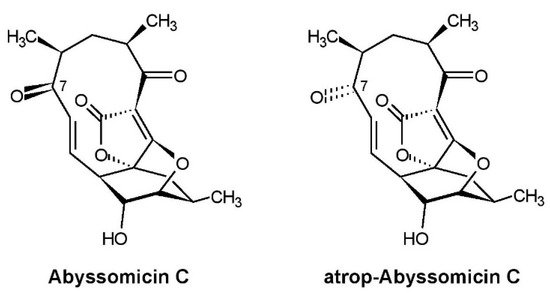 From abyssomicin B, C, and D, single crystals were obtained, and their relative configuration was determined by X-ray structure. NMR analyses confirmed the X-ray data [3]. The absolute stereochemistry was determined by both the Mosher method [9] and the Helmchen method [10]. 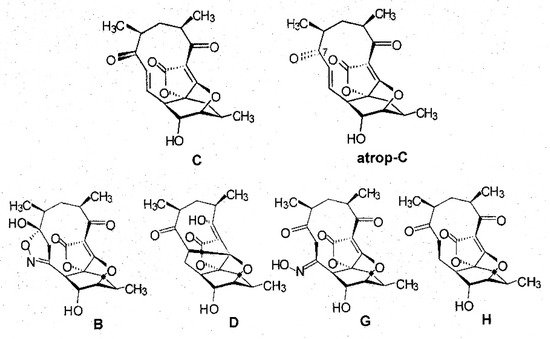 Continuous interest in abyssomicins has been shown by Vidali et al., applying biomimetic approaches toward the synthesis of abyssomicin C and atrop-abyssomicin C based on an intramolecular Diels–Alder reaction of a butenolide derivative attached to a keto-triene side chain [17].

3. Biological Activity and Mode of Action

Abyssomicin C and atrop-abyssomicin C were the first known natural inhibitors of pAba biosynthesis. Two enzymes catalyze pAba biosynthesis from chorismate, 4-amino-4-deoxychorismate (ADC) synthase, which converts chorismate and glutamine into ADC and glutamate, and ADC lyase, which catalyzes an elimination reaction of ADC to produce pAba. ADC synthase is a heterodimer composed of two nonidentical subunits, PabA and PabB. PabA functions as a glutamine amidotransferase, while PabB catalyzes the substitution of the chorismate 4-hydroxy group by an amino group while retaining the original configuration. The Süssmuth group has shown that the PabB subunit of ADC synthase is the molecular target of abyssomicin C and atrop-abyssomicin C. The antibiotics act as covalent binders in a Michael addition to the side chain of Cys 263, located in the proximity of the active site of PabB, and inhibit pAba formation and, consequently, folate biosynthesis [5]. The increased antimicrobial activity of atrop-abyssomicin C can be explained by its more powerful Michael acceptor properties [14].

The oxabicyclooctane ring system of abyssomicin C, and atrop-abyssomicin B shows a striking similarity to one solution conformation of chorismate, which suggests that both antibiotics act as substrate mimetics (Figure 4).

Figure 4. Similarity of the diaxial conformation of chorismate with the abyssomicin C core.

More
© Text is available under the terms and conditions of the Creative Commons Attribution (CC BY) license (http://creativecommons.org/licenses/by/4.0/)
Upload a video for this entry
Information
Subjects: Microbiology
Contributor MDPI registered users' name will be linked to their SciProfiles pages. To register with us, please refer to https://encyclopedia.pub/register :
Hans-Peter Fiedler
View Times: 107
Revisions: 2 times (View History)
Update Time: 04 Jun 2021
Table of Contents
1000/1000
Hot Most Recent