Submitted Successfully!
Thank you for your contribution! You can also upload a video entry related to this topic through the link below:
https://encyclopedia.pub/user/video_add?id=10465
Check Note
2000/2000
Asbestos and Intrahepatic Cholangiocarcinoma
Edit
Upload a video
This entry is adapted from 10.3390/cells9020421

The link between asbestos exposure and the onset of thoracic malignancies is well established. However epidemiological studies have provided evidences that asbestos may be also involved in the development of gastrointestinal tumors, including intrahepatic cholangiocarcinoma (ICC). In line with this observation, asbestos fibers have been detected in the liver of patients with ICC. Although the exact mechanism still remains unknown, the presence of asbestos fibers in the liver could be explained in the light of their translocation pathway following ingestion/inhalation. In the liver, thin and long asbestos fibers could remain trapped in the smaller bile ducts, particularly in the stem cell niche of the canals of Hering, and exerting their carcinogenic effect for a long time, thus inducing hepatic stem/progenitor cells (HpSCs) malignant transformation. In this scenario, chronic liver damage induced by asbestos fibers over the years could be seen as a classic model of stem cell-derived carcinogenesis, where HpSC malignant transformation represents the first step of this process. This phenomenon could explain the recent epidemiological findings, where asbestos exposure seems mainly involved in ICC, rather than extrahepatic cholangiocarcinoma, development.

Cholangiocarcinoma (CC) encompasses a heterogeneous group of malignancies developing from the biliary epithelial tree within (ICC) and outside (ECC) the liver [1]. In the past three decades a progressive increase in ICC incidence has been registered worldwide, while ECC appears stable or slightly decreasing [2]. Notably, ICC increase seems to have not reached a plateau and, basing on the global epidemiological trend, it has been estimated that about 50% of primary liver cancer deaths will be ascribable to this disease within 2035 [3]. The wide geographic variations between ICC and ECC incidence is thought to reflect a different distribution of host genetic and local risk factors. Currently some pathological conditions, such as primary sclerosing cholangitis, hepatolithiasis, bile duct cysts, Caroli’s disease, liver fluke infections and non-alcoholic steatohepatitis (NASH) have been recognized as risk factors for ICC (Table 1) [2]; however in Western countries the aetiology of about 50% of diagnosed ICCs still remains unknown. This observation, along with the wide molecular heterogeneity of this disease [4], strongly suggests that other risk factors may be involved in ICC development and in its global increase of incidence. Among the emerging risk factors, recent epidemiological studies have provided compelling evidences about a link between asbestos exposure and ICC.
Table 1. Risk factors for intrahepatic cholangiocarcinoma (ICC).
Abbreviations: HBV, hepatitis B virus; HCV, hepatitis C virus; NAFLD, non-alcoholic fatty liver disease; NASH, non-alcoholic steatohepatitis. Weak/modest association (OR: 1–1.7); moderate association (OR: 1.7–3); strong association (OR: 3–8); very strong association (OR > 8). * Available studies did not distinguish between ICC and extrahepatic cholangiocarcinoma (ECC).

The term asbestos is generically assigned to a group of naturally occurring fibrous silicates that have been largely employed in manufacturing and construction during the past century, due to their heat and chemical resistance, high mechanical and thermal stability and low cost. According to the chemical composition and crystalline structures, asbestos fibers can be divided into two groups: serpentines and amphiboles (Figure 1A). Chrysotile (also known as ‘white asbestos’) is the only member of the serpentine group and consists of an octahedral magnesium hydroxide layer intercalated between silicate tetrahedral layer; fibers are curled, flexible, long and easily breakable [5]. Currently it accounts for up to 90%–95% of commercially-used asbestos worldwide [6]. Amphiboles are all hydrated silicates and have double tetrahedral chains with Si8O22 composition distinguished from one another by the number of the cations Ca, Fe, Mg and Na that they contain [5]. Actinolite, amosite, anthophyllite, crocidolite and tremolite (also known as ‘brown asbestos’) belong to the amphibole group: fibers are rigid, short, sharp and highly resistant to chemical and biological solutions, and have a greater biopersistence compared to chrysotile [5][7]. 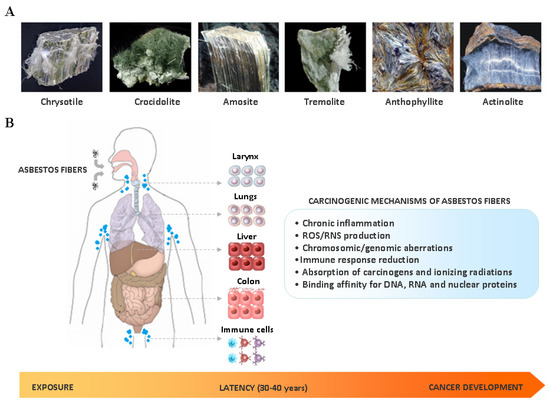 Currently the amount of epidemiological studies on ICC incidence and asbestos exposure is limited. Despite this possible association has been suggested in some cohort studies (Table 2), most of them reported estimates referred to the broad category of primitive liver cancers, without specific data on ICC. The lack in these studies of specific data on ICC development and asbestos exposure may be ascribable to different causes. The first important issue when interpreting reported epidemiological data on CC is the evolving WHO International Classification of Disease (ICD) coding system, which is internationally used by cancer registries to record different cancers. Indeed, this coding system includes a specific code for ICC only from version 8 (the ICD-7 code 155.0 included all forms of liver cancer). A second important issue regards possible misclassification, as some ICCs may be misdiagnosed as cancers of unknown primary (CUPs), hepatocellular carcinomas (HCCs) or mixed HCC-ICCs [30]. Moreover, although showing an increase in global incidence, ICC still represents a minority of primary liver cancers [31]; this fact as two important consequences. First, relative risks estimated for liver cancers are driven by the vast majority of HCCs, with ICCs playing a minor role. Secondly, only extremely large cohorts (as those based on nation-wide registers) have sufficient statistical power to capture a clear relationship between a specific risk factor and the development of a disease with low incidence. Figure 2 shows the statistical power for the study of ICC under several scenarios according to Armstrong [32]. In case of a link between asbestos and ICC, assuming a baseline incidence of 2 per 100,000 person-years (higher than the actual incidence documented in Europe in 2007 [33]), 450,000 person-years should be studied to observe a standardized incidence rate (SIR) of 2.0 with a statistical power of 80%. Furthermore, it should be underlined that the SIRs, calculated with reference to the entire population, are usually lower than the relative risks estimated in case-control studies (or in cohort studies including a comparison group of unexposed subjects). Although several studies showing data on occupational cohorts exposed to asbestos have been published, on the balance, it is not surprising that an increased risk of ICC due to asbestos exposure has been seldom reported in scientific literature. Indeed, the vast majority of the cohorts did not provide the statistical power and the diagnostic information needed to study ICC. 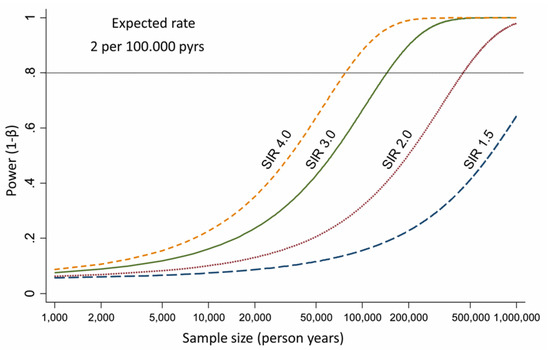 Figure 2. Statistical power for the study of ICC and asbestos exposure calculated under several scenarios according to Armstrong [32]. SIR: standardized incidence ratio.
Table 2. Asbestos and liver/biliary tract cancer in cohort studies.
Abbreviations: M: males; F: females; SMR: standardized mortality ratio; SIR: standardized incidence ratio. * Studies reporting SIR (standardized incidence ratio) and not SMR (standardized mortality ratio).
Recently, two different case-control studies highlighted the role of asbestos in ICC development. The first study was based on historical data from 69 ICC and 86 ECC cases occurring at S. Orsola-Malpighi University Hospital of Bologna (Italy) between 2006 and 2010 [28]. The cases were individually matched by calendar period of birth, sex, and region of residence to historical hospital and population controls. Occupational exposure to asbestos was retrospectively assessed considering job titles obtained from work histories. An OR = 4.81 (95% CI 1.73–13.33) for ICC risk was reported among subjects occupationally exposed to asbestos for over 30 years, whereas a limited evidence was observed for ECC (OR = 2.09, 95% CI 0.83–5.27). These findings have been confirmed in a case-control population-based study nested in the Nordic Occupational Cancer cohort (NOCCA) cohort [29]. In this study 1458 ICC and 3972 ECC cases occurring in Finland, Iceland, Norway and Sweden starting from January 1920 were analyzed. Each case was individually matched by birth year, sex, and country to five population controls. The cumulative exposure to asbestos [measured in fibers (f)/mL × year] was assessed applying the NOCCA job exposure matrix to data on occupations collected during national population censuses (conducted in 1960, 1970, 1980–1981, and 1990). An increased risk for ICC, but not for ECC, was observed by cumulative exposure to asbestos: 0.1–4.9 f/mL × years, OR = 1.1 (95% CI 0.9–1.3); 5.0–9.9 f/mL × years, OR = 1.3 (95% CI 0.9–2.1); 10.0–14.9 f/mL × years, OR = 1.6 (95% CI 1.0–2.5); ≥15.0 f/mL × years, OR = 1.7 (95% CI 1.1–2.6). Overall these two studies suggest that exposure to asbestos may represent a risk factor for ICC development; conversely the association with ECC seems null or weak.
To provide further evidence about an association between asbestos exposure and ICC development, we recently conducted a prospective case-control study (Cholangiocarcinoma Aetiology: Role of Asbestos, CARA study) in collaboration with the Occupational medicine Unit of S. Orsola-Malpighi University Hospital of Bologna (Italy). The results obtained have been shown at the II biennal congress of the European Network for the Study of Cholangiocarcinoma (ENS-CCA) (Rome, 2018). A total of 168 CC cases (116 ICCs and 52 ECCs) and 185 controls (inpatients referring to our hospital for non-neoplastic diseases) were recruited. Data on established or suspected CC risk factors were extracted from the clinical records of the cases and controls. Exposure to asbestos was based on categories derived from the ReNAM questionnaire categorization: unlikely (reference category), possible and likely. The results obtained in this study on incident cases not only confirm the results obtained in the two studies on prevalent cases [28][29], but even reinforce the link between asbestos exposure and ICC risk. Moreover, it is worth to underline that in our clinical experience more than 40% of ICC patients who are diagnosed in absence of any known risk factors for this disease result exposed to asbestos according to ReNaM questionnaire. This observation suggests that among the ethiologic factors linked to ICC development, asbestos is likely one of most responsible for ICC increasing incidence worldwide, at least in Western countries.
Basing on these findings, in order to identify putative molecular biomarkers of asbestos exposure in ICC patients, we performed next generation sequencing analysis in patients exposed and not-exposed to asbestos (EtherBil study, NCT02184871). Notably, patients exposed were found to display a distinctive molecular profile compared to the group of not exposed. These findings are in line with some studies in lung tumors showing a different molecular profile between asbestos-exposed and non-exposed patients, suggesting that asbestos could induce typical molecular alterations in target cells [48][49][50][51].

More
© Text is available under the terms and conditions of the Creative Commons Attribution (CC BY) license (http://creativecommons.org/licenses/by/4.0/)
Upload a video for this entry
Information
Subjects: Cell Biology
Contributor MDPI registered users' name will be linked to their SciProfiles pages. To register with us, please refer to https://encyclopedia.pub/register :
Simona Tavolari
View Times: 63
Revisions: 2 times (View History)
Update Time: 04 Jun 2021
Table of Contents
1000/1000
Hot Most Recent