Submitted Successfully!
Thank you for your contribution! You can also upload a video entry related to this topic through the link below:
https://encyclopedia.pub/user/video_add?id=10451
Check Note
2000/2000
Differentiated Thyroid Cancer
Edit
Upload a video
This entry is adapted from 10.3390/cancers13102436

Differentiated thyroid cancer (DTC) is the most common endocrine malignancy with a high incidence rate in females.

1.1. The Epidemiology and Pathophysiology of Thyroid Cancer

Thyroid cancer is the most common endocrine malignancy and the most commonly diagnosed cancer in people aged 15 to 29 years, and its incidence has continuously increased with 567,233 cases and approximately 41,000 deaths worldwide in 2018 [1][2]. The incidence rate of thyroid cancer is approximately three-fold higher in females than in males but the mortality rate is higher in males than in females [3][4][5]. In addition, a recent study confirmed that the recurrence rate of well-differentiated thyroid cancer (DTC) is higher in men compared with women. Due to the COVID-19 epidemic, delayed investigations and treatment may further lead to increased morbidity and mortality of thyroid cancer [6]. The various clinical outcomes of thyroid cancer are considered to be related to patient age, sex, tumor type, distant metastases, and invasion of adjacent tissue and lymph nodes [7].

Despite the generally stable course, favorable prognosis, and low mortality of thyroid cancer, the rate of local recurrence and distant metastases of DTC approaches 10% to 30%, which depends on the length of follow-up [10][11]. A previous study found that DTC can recur even up to 20 years after the initial diagnosis [12], therefore, a long-term follow-up of patients with DTC is essential [13]. Notably, several studies have investigated the factors related to DTC relapse. However, heterogenicity exists among these studies, and the results indicated the associations between early-onset and recurrence [14]. More specifically, the earlier DTC occurred, the more likely it was to recur. Therefore, timely diagnosis of DTC recurrence is critical.

Additionally, the discrimination and identification of thyroid cancer nodules and thyroid benign nodules are important. In most cases, the initial presentation of thyroid cancer is a thyroid nodule [15], however, less than 10% of DTCs appear in the thyroid nodules [16]. Given various factors including age, sex, family history, exposure to radiation, and nodule size that could affect the shift from thyroid nodules to cancer [17], responding to this shift in a timely manner is necessary. Differentiating early malignant tumors from benign tumors and providing definite staging are key challenges for diagnosing and treating thyroid cancer. Moreover, estimating tumor progression or predicting prognosis precisely can significantly aid physicians in making clinical decisions regarding treatment strategies in patients with thyroid cancer. Palpation of the thyroid and cervical lymph nodes remains easiest and least expensive routine detection method, but this method is also the least sensitive [18][19]. In contrast, biopsy and histopathological examination are typically the diagnostic gold standard for thyroid cancer [20]. However, fine-needle aspiration biopsy (FNAB) usually samples a small portion of the lesions; thus, this method could provide limited information regarding tumor heterogeneity and may lead to missed diagnoses. Notably, a proportion of patients are still intractable to invasive examination for screening making it difficult to repeat pathological assessments. Noninvasive imaging examinations including high-resolution ultrasound, magnetic resonance imaging (MRI), computed tomography (CT), single-photon emission computed tomography (SPECT), positron emission tomography (PET), and PET/CT, are also playing an increasingly important role in initial tumor screening, staging, restaging, management, and posttreatment follow-up [21]. Of these, high-resolution ultrasound remains the sole fundamental imaging method in the diagnosis and screening of thyroid nodules and cancer [22]. High-resolution ultrasound is a safe noninvasive imaging technique that could aid in enhancing the early detection of pathologies [23].

Ultrasound is based on the pulse-echo principle that makes it possible to determine the thyroid size, location, number, and morphology of individual nodules, and occult nodules omitted by physical examination [18], and present these findings in a single cross-sectional B-scan image. The suspicious ultrasound features of malignant thyroid nodules exhibit the following characteristics: solid nodule structure, hypoechogenicity, taller-than-wide shape, irregular margin, microcalcification, and invasion of surrounding tissue [18][24]. Nodules that present pure cystic or cystic components that represent greater than 50% of nodule volume tend to be benign [25]. Despite its widespread availability and radiation-free features, the diagnosis significantly relies on the radiologists’ experience and subjective judgments, which limits the ability to make an objective diagnosis. Although neck ultrasound is the primary method used to investigate palpable thyroid masses, suspicious neck masses are typically initially screened through CT or MRI examination. Some features may be specific, whereas others may be incidental findings [26]. CT and MRI provide evidence for detecting lymph node metastasis as well as evaluating the invasion of adjacent tissue and organs with the features of cross-sectional imaging and reconstruction function [27]. It has been reported that the CT use rate in the examination of the neck and cervical spine has increased rapidly and is greater than that of ultrasound in the United States [28]. A previous study also verified the value of CT in detecting incidental thyroid nodules and hypothesized that CT imaging may be the current trend rather than ultrasound [29]. Nevertheless, CT also has an obvious limitation given that contrast-enhanced CT with iodinated contrast medium would delay subsequent radioactive iodine therapy [30]. Conversely, based on gadolinium-based contrast agents, MRI can be employed without interfering with radioiodine administration despite the requirement for a longer scan time. In addition, with its higher soft-tissue contrast, MRI combined with diffusion-weighted imaging (DWI) sequences could provide qualitative and quantitative information about tumor lesions at the cell level. DWI has been applied to assess the differentiation of benign and malignant thyroid tumors for several years [31][32]. A recent study verified the potential advantages of DWI in predicting aggressive histological features of thyroid carcinoma [33].

Nuclear medicine examinations have been used in the diagnosis, treatment, and surgical management of thyroid disease. Given the high avidity of radioiodine in functioning thyroid tissues, 131I whole-body scintigraphy (WBS) has a high value in tumor and metastasis detection [34]. WBS is also regarded as a routine diagnostic procedure for DTC patients with thyroidectomy [35]. However, WBS cannot provide a precise anatomic location, which greatly constrains its potential value. Compared with WBS, SPECT/CT not only enables anatomic localization of the tumor but also has higher sensitivity (50%) and specificity (100%) [36]. Besides, PET/CT or PET/MRI is also a relatively high sensitivity imaging technique in the evaluation of recurrent or metastatic tumors. A meta-analysis calculated that the pooled sensitivity was as high as 93.5% for PET/CT in detecting recurrent or metastatic DTC [37]. In addition, PET/CT can detect 21.2% of lymph nodes and soft tissue lesions that were missed by ultrasound [38]. Compared with PET/CT, PET/MRI has low radiation, but the high costs of this method should also be considered. Although some reports have demonstrated the value of the nuclear medicine approach applied in thyroid cancer, underlying issues, such as cost-effectiveness, universality, and radiation, require further discussion. Notwithstanding the above strengths, the current imaging technologies for tumor classification and prediction remain limited. Radiomics is an emerging field that involves segmenting lesions, extracting quantitative radiology features from medical images, and constructing models to classify or predict disease.

2.1. The Definition of Radiomics

Radiomics is defined as quantitative mapping that is used to construct a prediction model by extracting and analyzing medical image features related to the prediction target, including clinical endpoints and genomic features [39]. Radiomic features capture tissue and lesion characteristics, such as heterogeneity and shape, and may be used for clinical problem solving alone or in combination with demographic, histologic, genomic, or proteomic data. As an important innovation, medical image analysis automatically extracts a large number of quantitative features of medical images in a high-throughput manner. The use of radiomics in medical image analysis represents a significant improvement [40]. Radiomics research is based on the hypothesis that this type of automatic or semiautomatic software can provide better analysis of medical image data than human doctors due to the increased number of image features revealed by conventional and novel medical imaging that cannot be recognized by human doctors [41]. More specifically, the technology is based on the hypothesis that genomics and proteomics patterns can be expressed in terms of macroscopic image-based features [40].

The first-order statistics features or histogram-based features are derived from the statistical moments of the image intensity histogram and based on the image intensity distribution represented by histograms that characterize the distribution of individual pixel or voxel intensity values within. Features, such as uniformity, asymmetry, kurtosis, and skewness, can also be used to extract other features, such as image energy and entropy [43][44].

Second-order statistical features, which are also known as texture features, quantify intratumoral heterogeneity and explain the spatial interdependence or cooccurrence of information between adjacent voxels [42]. Textural features are not directly computed from the original image but from different descriptive matrices that already encode specific spatial relations between pixels or voxels in the original image. In the original image, there are some matrices of the spatial relationship between the intensity of the encoded image from which a large number of texture features can be calculated. The gray value distribution matrix (GLCM) of cooccurrence voxels in the gray level co-occurrence matrix is one of the most commonly used second-order features in radiomics [45][46]. The neighborhood gray-level different matrix (NGLDM) and the gray-level run-length matrix (GLRLM) are also common. Higher-order statistical features are typically calculated using statistical methods after applying a specific mathematical transformation (filter). For example, repeating patterns, noise suppression, edge enhancement, histogram-oriented gradients, or local binary patterns (LBPs) can be identified. The applied mathematical transformations or filters include Laplacian transformations of Gaussian-filtered images (Laplacian-of-Gaussian), wavelet or Fourier transformations, Minkowski functionals, or fractal analysis [47].

2.3. The Workflow of Radiomics

Radiomics analysis can be achieved by two methods. The first method includes conventional and common typical methods that are used to determine the region of interest (ROI) of the medical image first and then extract the radiomics features from the ROI and analyze the clinical problem [48]. The second method is less applied but pointed out by the previous review, it works based on the radiomics images directly but not the radiomics data derived from conventional images, it is also helpful to recognize ROIs reliably [41]. 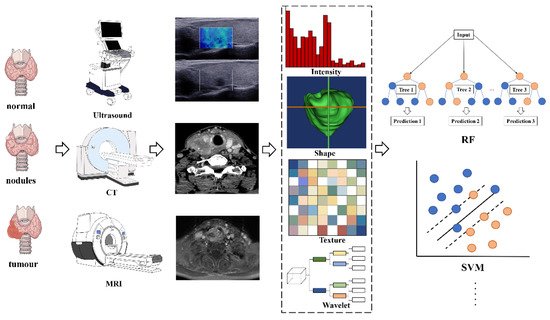 Figure 1. The flowchart shows the workflow of radiomics and its application in thyroid cancer or nodule classification and prediction. Abbreviations: RF—random forest; SVM—support vector machine

ROIs are commonly delineated by professional radiologists manually or by special software in a semiautomatic or fully automatic manner. In the feature extraction stage, hundreds of candidate radiomic features are typically extracted theoretically to be used as the input of the prediction model, but the number of model parameters will increase exponentially afterward. Moreover, radiation features generally show a high degree of correlation with each other, indicating data redundancy. Thus, some features can be discarded, whereas other features can be grouped and replaced by representative features. Therefore, a large number of candidate features must be removed or transformed via a process called dimensionality reduction [47].

After feature selection, a mathematical model can be established to predict or solve targeted medical problems, such as the existence of specific gene mutations or tumor recurrence. Radiation features can be modeled in many different ways, ranging from statistical models to machine learning methods, depending on the clinical problems to be solved [50]. The most popular algorithms in radiomics are linear regression and logistic regression, decision trees (such as random forests), support vector machines (SVMs), neural networks, and Cox proportional hazards models with censored survival data.

The application and research potential of radiomics are still being explored. However, based on published studies, the clinical application of radiomics can be classified into the following three categories: radiogenomics (linking imaging data to biology), diagnosis of diseases, and clinical outcome prediction, including treatment response, recurrent disease, and survival time [47][51]. However, radiomic studies of thyroid cancer mainly involve the latter two categories.