Submitted Successfully!
Thank you for your contribution! You can also upload a video entry related to this topic through the link below:
https://encyclopedia.pub/user/video_add?id=10394
Check Note
2000/2000
Pro-Inflammatory Molecules
Edit
Upload a video
This entry is adapted from 10.3390/ph14040340

Pro-inflammatory molecules, such as cytokines and chemokines, are produced in the brain by resident cells, mainly by microglia and astrocytes. Brain infiltrating immune cells constitutes another source of these molecules, contributing to an impaired neurological synapse function, affecting typical neurobehavioral and cognitive performance. Currently, there is increasing evidence supporting the notion that behavioral alterations and cognitive impairment can be associated with respiratory viral infections, such as human respiratory syncytial virus, influenza, and SARS-COV-2, which are responsible for endemic, epidemic, or pandemic outbreak mainly in the winter season.

Pro-inflammatory molecules, such as cytokines (e.g., tumor necrosis alpha (TNF-α), interleukin (IL)-1β, IL-6, granulocyte-macrophage colony-stimulating factor (GM-CSF)) [1][2] and chemokines (e.g., CCL2, CCL3, CCL4, CCL5, CCL11, CXCL-8, and CXCL10) are small signaling molecules that are mainly secreted by immune cells, as well as by brain cells, including microglia, astrocytes, and neurons [3]. These molecules play important roles both in the immune system and for the central nervous system′s normal function (CNS) [4][5]. For example, cytokines participate in the cognitive process, and it has been shown that both the overexpression and the down-regulation of these cytokines alter synaptic plasticity [6][7][8]. According to this concept, the central cytokines involved in the memory and learning processes are IL-1β, IL-6, and TNF-α [7][9][10]. Reports indicate that IL-1β is expressed in the CNS at low levels under certain physiologic conditions and is required for the consolidation of the memory and learning processes [10]. Also, it has been described that an increase or the absence of IL-1β negatively affects the cognition process [6][11].

On the other hand, IL-6 is a pro-inflammatory cytokine found in the CNS under certain physiological conditions and secreted mainly by glial cells [9][12]. It is known that both IL-1β and IL-6 levels are below the limits of detection for protein levels under certain physiological conditions [12]. Moreover, it was shown that IL-6 expression is increased during the LTP process, and the consolidation of this LTP is affected by the inhibition of IL-6 using a neutralizing antibody [9]. Meanwhile, TNF-α is also a pro-inflammatory cytokine that exerts physiological, neuroprotective, and neurodegenerative effects in the CNS [6]. Accordingly, it has been previously reported that TNF-α plays a role in the induction of LTP and LTD because either the absence or overexpression of these cytokines is detrimental to the learning and memory processes [6][13].

Additionally, IFN-γ has been associated with enhanced neurogenesis in adult mice's dentate gyrus and improved spatial learning and memory [6]. Besides, chemokines such as CCL2 and CX3CL1 also contribute to synaptic plasticity in the CNS [14][15][16][17]. CCL2 is constitutively expressed in several zones of the CNS, including the hippocampus, and can modulate different neuron populations′ electrical activity (for instance, hippocampal neurons) [18][19]. Furthermore, CX3CL1 is a chemokine that is constitutively expressed in the CNS, with exceptionally high levels by hippocampal neurons, and the receptor this chemokine is expressed by microglia [17]. It has been shown that CX3CL1 can modulate glutamatergic synapsis and exert a neuroprotective effect [17][20].

Neurobehavioral alterations and cognitive impairment are part of neuropsychiatric disorders, such as autism spectrum disorder (ASD) [21], schizophrenia (SCZ) [22], mood alterations [23], learning and memory impairment, among others. The incidence of these pathologies is about 10 to 20% worldwide [24]. The etiology of these ailments is multifactorial, where not only genetic factors are relevant, but also the environment can contribute significantly to the triggering of such neuropsychiatric disorders [25]. According to this, several studies have associated the neuroinflammation caused by pro-inflammatory molecules with these neuropsychiatric pathologies [26][27][28].

Schizophrenia (SCZ) is a neurodevelopmental and chronic psychiatric disorder with multifactorial causes, characterized by alterations at the cognitive, behavioral, and emotional levels [29]. Studies have described that reducing the gray matter takes place, mainly in the hippocampus, prefrontal, and temporal cortex [30][31][32]. SCZ has four stages; risk stage, the prodrome of SCZ, the onset of psychosis, and chronic disability stage [33]. A pro-inflammatory component has been shown for this mental disease, with an abnormal serum pattern of cytokines characterized by high levels of IL-2, IL-6, and CXCL8 (also known as IL-8) [34][35][36]. It has been suggested that exposure to increased levels of pro-inflammatory molecules during pregnancy can alter neurodevelopment [37]. Elevated levels of CXCL8 during the second or third trimester of pregnancy can have an impact on the development of the fetus brain, which might lead to an alteration of the synaptic density, neuronal migration, and/or survival of these cells in the cortex. These neurological alterations can contribute to explaining the memory impairment observed in schizophrenia [37].

Meanwhile, the altered secretion of IL-6 and TNF-α during the last trimester of pregnancy has been related to the inhibition of proper synaptic formation and glial cell development [37]. The SCZ is manifested in puberty or early adulthood, where serum IL-1β, IL-6, and TNF-α increase in patients with the first episode of psychosis (FEP) with or without drug treatment [38]. CXCL8 and IFN-γ also have been found elevated in sera from patients with FEP with drug treatment and stable chronic patients [38]. However, these data are controversial due to depending on the experimental design and sample collection of the study.

Patients infected by any of the previously mentioned viruses and who show neurological symptoms are usually treated with antivirals and anti-inflammatory drugs (Figure 1). When an adult patient infected by  Influenza virus develops neurological symptoms, antiviral treatment has often been used [39][40][41]. Oseltamivir phosphate is an antiviral from the neuraminidase inhibitors drug used in treating patients infected with Influenza virus since this antiviral inhibits the reproduction of the virus [40]. During a study performed in 2009, 61.2% of the infants infected with Influenza virus and with neurologic symptoms were treated with oseltamivir phosphate upon admission to the hospital, and because of this treatment, most of them have recovered without sequels [42]. Another antiviral drug that has been used is amantadine, which has the characteristic to penetrate the CSF [40]. In one case, infants infected with IAV received the antiviral treatment, and at the same time, were treated with methylprednisolone and ulinastatin -which are anti-cytokines drugs- and decreasing the temperature of the forehead [41]. Both patients were able to recover and did not present any sequels [41]. Other pro-inflammatory inhibitors that might be useful to reduce neuroinflammation are against TNF-α, IL-1β, and IL-6 [43]. It has been suggested that the use of therapies that suppress the pro-inflammatory molecules might be beneficial against SCZ as a complement of the regular treatment used in this disease [43]. The use of vaccines to protect against the complications developed due to the infection with Influenza virus has been controversial. Some reports have indicated that certain vaccines against the influenza virus might be related to the development of neurologic disorders, while other reports have suggested possible protection against the development of symptoms like BGS [44][45]. If the vaccination against the Influenza virus protects from neurologic disorders, then the mother′s immunization during the pregnancy might prevent the neurologic symptoms in the offspring [46]. 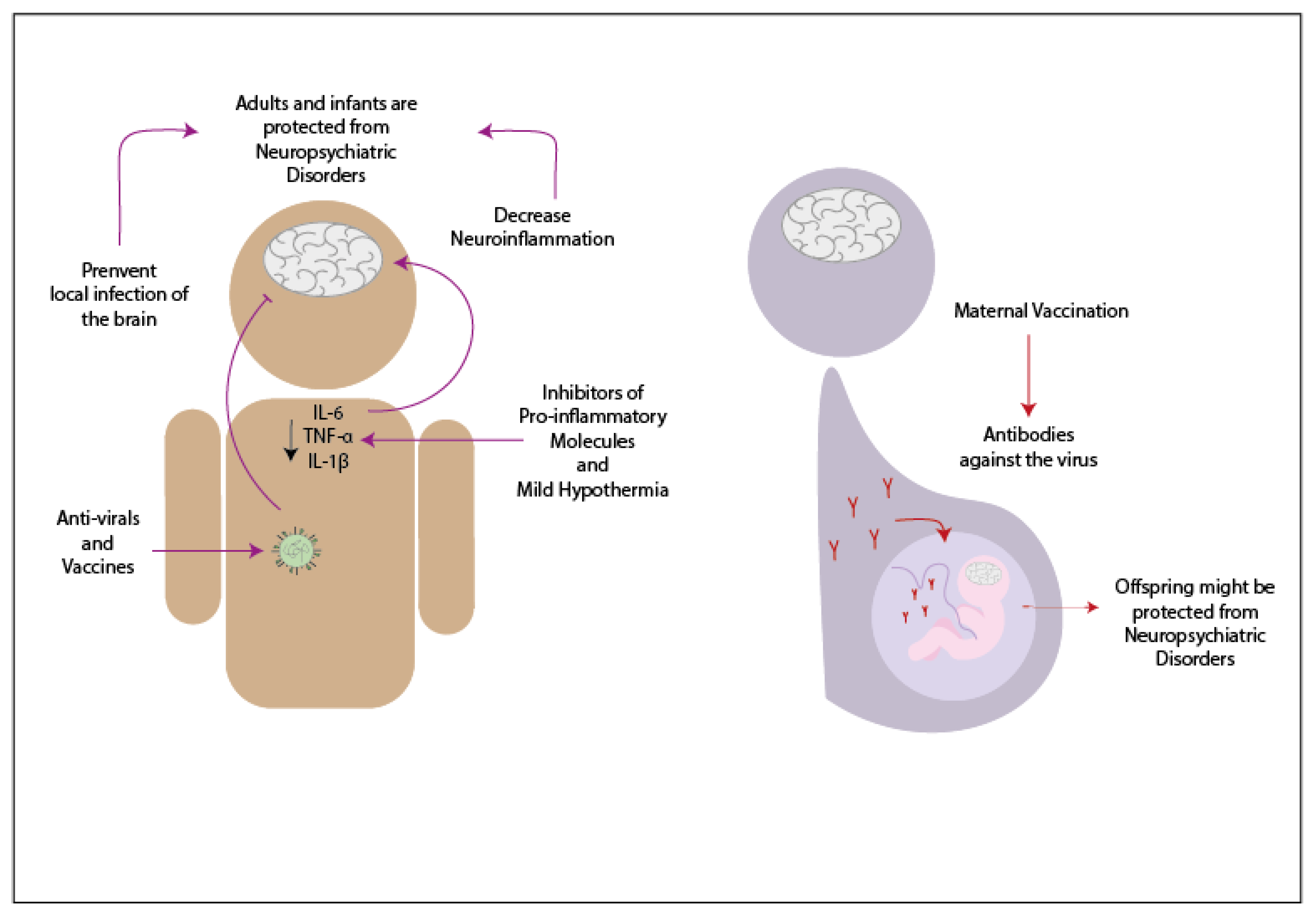 Figure 1. Possible treatments to prevent neurologic consequences in patients infected by respiratory viruses. Adults and infants that present diverse neuropsychiatric disorders can be decreased using antivirals drugs, which will prevent the brain′s local infection and therefore protect from further consequences. Additionally, the use of inhibitors of pro-inflammatory molecules and mild hypothermia can decrease the secretion of pro-inflammatory molecules, and as a result, decrease neuroinflammation. The use of vaccines might protect from developing neuropsychiatric disorders in adults, infants, and offspring due to the maternal vaccination.

In the case of hRSV, there are no current treatments that have been tested in the population [47]. However, studies in animal models have suggested a possible way to prevent neurologic symptoms. In the study made in 2013, it was demonstrated that the vaccination of mice previous to the infection with hRSV could decrease the neurologic symptoms due to the infection with this virus [48].

For patients infected with SARS-CoV-2 that developed neurologic symptoms have been treated with antivirals. In the case of a patient positive to SARS-CoV-2 that presented acute myelitis, it was treated with several antivirals -such as ganciclovir and loponavir- along with antibiotics, such as moxifloxacin and meropenem [49]. Since this virus appeared over a year ago, not much has been advance in this area. However, probably suppressing the neuroinflammation might decrease the neurological symptoms. The evaluation as to how vaccines affect these symptoms remains unknown.

Pro-inflammatory molecules, such as cytokines and chemokines, play an essential role in the immune response and the immune and central nervous system′s proper function. IL-1β, IL-6, and TNF-α are the cytokines that have been constantly involved in the cognitive process. The pro-inflammatory molecules have been related to causing neuroinflammation, which might lead to neuropsychiatric disorders, including neurobehavioral alterations and cognitive impairment. Interestingly, viral infections have been thought to develop these alterations through direct infection of the CNS or increased local inflammation. Respiratory viruses are no exception to this; the Influenza virus, hRSV, and SARS-CoV-2 have been associated with neuropsychiatric disorders. The Influenza virus infection can lead to neurologic symptoms by directly reaching the brain or increasing the brain′s inflammatory response. The pro-inflammatory molecules commonly increased during the infection with Influenza virus are the IL-6, TNF-α, and IL-1β.

More
© Text is available under the terms and conditions of the Creative Commons Attribution (CC BY) license (http://creativecommons.org/licenses/by/4.0/)
Upload a video for this entry
Information
Subjects: Clinical Neurology
Contributor MDPI registered users' name will be linked to their SciProfiles pages. To register with us, please refer to https://encyclopedia.pub/register :
Alexis Kalergis
View Times: 123
Revisions: 2 times (View History)
Update Time: 02 Jun 2021
Table of Contents
1000/1000
Hot Most Recent