Submitted Successfully!
Thank you for your contribution! You can also upload a video entry related to this topic through the link below:
https://encyclopedia.pub/user/video_add?id=10391
Check Note
2000/2000
Berberine in Oncogenic Herpesvirus Infections
Edit
Upload a video
This entry is adapted from 10.3390/v13061014

Human herpesviruses are known to induce a broad spectrum of diseases, ranging from common cold sores to cancer, and infections with some types of these viruses, known as human oncogenic herpesviruses (HOHVs), can cause cancer. Challenges with viral latency, recurrent infections, and drug resistance have generated the need for finding new drugs with the ability to overcome these barriers. Berberine (BBR), a naturally occurring alkaloid, is known for its multiple biological activities, including antiviral and anticancer effects.

Herpesviruses are a diverse group of large double-stranded DNA viruses that share a common virion morphology. Herpesviruses, which belong to the Herpesviridae family, are highly infectious and frequently infect humans for life and persist latently along with the ability to cause recurrent infections [1][2]. Some types of herpesvirus that can lead to cancer are recognized to be oncogenic, such as Epstein–Barr virus (EBV, also known as human herpesvirus 4) and Kaposi’s sarcoma-associated herpesvirus (KSHV, also known as human herpesvirus 8) [3][4]. On the other hand, some studies have reported other potentially human oncogenic herpesviruses (HOHVs) with an effect on various types of cancer such as herpes simplex virus 1 (HSV-1, also known as human herpesvirus 1), herpes simplex virus 2 (HSV-2, also known as human herpesvirus 2), and human cytomegalovirus (HCMV) [5][6][7]. It is known that herpesviruses use the infection strategy ‘‘run and hide,’’ and significant complications of these infections can be noticed once the immune system is compromised by various factors that negatively affect the immune system, including physiological and environmental factors [8][9]. Infections with herpesviruses are currently challenging to cure, and the clinical drugs used to treat them, such as acyclovir and other nucleoside analogs, do not entirely cure the disease or prevent recurrent infections while blocking the viral replication, thus reducing the duration of symptoms and promoting the healing of epithelial damage, lesions, and other cellular damages that were triggered by virus infection [10][11]. On the other hand, the overuse of these drugs has generated the problem of drug resistance, which in turn has adversely affected the treatment efficacy [12]. Currently, anti-herpesvirus drug development strategies face many challenges, and the most important tasks are linked with developing potent anti-herpesvirus medicines that can conquer the problems of drug resistance, viral latency, and recurrent infections and can also act with diverse mechanisms of action, minimum or no toxicity, and minimum adverse effects [13][14]. Most drug discovery strategies rely on natural products as a considerable source of new drug candidates with relatively safe profiles, especially from plant sources [15].
Berberine (BBR), a secondary metabolite that is biosynthesized by various plant species and is commonly present in the roots, rhizomes, and stem barks of various Chinese herbs as well as several plants of the Berberis genus [16]. Chemically, this compound is a quaternary ammonium salt of an isoquinoline alkaloid (PubChem CID: 2353) with a molecular weight of 336.4 g/mol (Figure 1) [17]. Biologically, BBR in numerous preclinical and limited human studies has been proven to exert various beneficial bioactivities against several human diseases, including microbial infections, inflammation, various types of cancer, cardiovascular diseases, gastrointestinal disorders, neurodegenerative diseases, depression, and metabolic dysfunctions [16][18][19][20]. More information about berberine’s bioavailability and safety profile is discussed in a later section.

Herpesviruses are known to employ several immune evasion strategies to cause latent infections in their host cells with the ability to generate certain types of cancer [21]. The potential of developing cancer has been clinically confirmed with EBV and KSHV infections, which are classified as a class I carcinogen [22]. The major carcinogenic mechanisms employed by EBV and KSHV have recently been clarified, where both viruses can repress apoptosis and tumor suppressor pathways, enhance the oncogenic microenvironment, promote cellular migration, metastasis, and angiogenesis, and generate mutagenesis [3][21][22].
This section records all studies concerning BBR and its protective effects on EBV and KSHV and their associated cancers, with a focus on the mechanisms of action and pathways along with effective concentrations or doses.

EBV is a double-stranded DNA virus that belongs to the gamma-Herpesviridae subfamily [23] and was first identified in Burkitt’s lymphoma by Sir Anthony Epstein and colleagues in 1964 [24][25]. This pathogen was the first tumor virus discovered in humans and is principally linked with lymphomas and epithelial cell cancers [26]. Saliva exchange is the most known transmitting method for EBV infection and therefore symptomatic initial infection or infectious mononucleosis was described as ‘’kissing disease’’ [27]. There is a strong connection between EBV and the development of cancer, where experimental data confirmed that EBV infection is linked with various human proliferative diseases involving primarily epithelial or lymphoid cells, including nasopharyngeal carcinoma (NPC) [28][29]. EBV demonstrates a type II latency mechanism in NPC patients, and this latency is mainly characterized by the expression of Epstein–Barr nuclear antigen 1 (EBNA1), which was observed to be vital for the replication, partition, transcription, and protection of the viral genome [30][31][32]. Other critical latent membrane proteins and several non-coding RNAs are also expressed by the virus during the latency phase associated with NPC [33]. Therefore, such targets are very crucial in the design of new drug candidates useful in the management of EBV and its linked NPC [34].
The direct suppression effect of BBR on EBV infection has been revealed in limited experiments, while its potent antitumor impacts have been explored in numerous in vitro and in vivo studies evaluated in multiple EBV positive-cancerous cells. For instance, in preclinical investigations (in vitro and in vivo), Wang and coauthors [35] showed the capacity of BBR to inhibit the latent and lytic replication of EBV-positive NPC cells and reduce cell proliferation, cause cell cycle arrest, and promote apoptosis in the EBV-positive NPC cells (Table 1). Their results unveiled diverse mechanisms of action at multiple molecular and cellular levels, suggesting BBR as a promising drug for the therapies of EBV infection and EBV-associated tumors such as NPC. In an in vivo experiment using athymic nude mice, BBR was observed to efficiently hinder the tumorigenicity and growth of EBV-positive NPC cells. The mechanism has been found to correlate with successful inhibition of signal transducer and activator of transcription 3 (STAT3) activation in NPC cells [36]. On the other hand, this study did not determine the inhibitory action of BBR against EBV. NPC could also be generated in the absence of EBV infection [37]. Since various drugs could work in a synergistic manner and provide enhanced treatment efficacy [38], BBR in combination with ginsenoside Rg3 (Rg3; an active molecule from Panax ginseng) was evaluated for improved anticancer properties and was detected to induce remarkable inhibition of NPC cell proliferation (in the absence of EBV infection) in vitro and in vivo. The underlying mechanism has been revealed to affect the mitogen-activated protein kinase (MAPK)/extracellular signal-regulated kinase (ERK) signaling pathways [39]. In another research performed on EBV-transformed B cells and cancerous B cells, treatment with BBR led to significant induction of mitochondrial apoptosis, clarifying that the role of X-linked inhibitor of apoptosis protein-associated factor 1 (XAF1) as a supporter of the mitochondrial apoptosis pathway might offer a novel target for cancer therapy, mainly for cancers with wild-type p53 expression [40].
Table 1. Protective effects of berberine against Epstein–Barr virus and its linked tumors.
The displayed mechanisms have been revealed by in vitro and in vivo studies. BBR, berberine; EBNA1, Epstein–Barr nuclear antigen 1; EBV, Epstein–Barr virus; GADD45α, growth arrest and DNA damage inducible alpha; IL-6, interleukin-6; MAPK/ERK, mitogen-activated protein kinase/extracellular signal-regulated kinase; NOD/SCID, non-obese diabetic/severe combined immunodeficient; NPC, nasopharyngeal carcinoma; PCNA, proliferating cell nuclear antigen; Rg3, ginsenoside Rg3; STAT3, signal transducer and activator of transcription 3; XAF1, X-linked inhibitor of apoptosis protein-associated factor 1.

KSHV was first detected in Kaposi sarcoma (KS) and is associated with around 1% of all human malignancies. KSHV, a gamma-herpesvirus, is transmitted through sex and appears to be spread in other ways, such as through blood and saliva [41][42]. This virus is also linked with other malignancies such as primary effusion lymphoma (PEL) and a subset of multicentric Castleman’s disease (MCD). KS has been the focus of investigation in KSHV research, as it is the most common acquired immunodeficiency syndrome (AIDS)-related malignancy [43][44]. KS is a cancer that originates in lymph or blood vessels and commonly appears as lesions on the skin, the inside of the mouth, or internally. Genetic alterations driven by chromosomal instability represent the main feature of KSHV-associated cancers [45][46]. It has been proved that KSHV can infect several different cell types, including endothelial cells, B cells, epithelial cells, dendritic cells, monocytes, and fibroblasts, and the virus uses a specific strategy to attack the host cell, generating latent and lytic infection [47]. The viral life cycle of KSHV, and the mechanisms of inducing latency, have comprehensively been reviewed by Cesarman and colleagues [48], and we highly recommend the readers to refer to this work for more detailed information. BBR has been involved in extremely limited studies related to KSHV-associated malignancies research, and no antiviral experiments have been performed against KSHV so far.
PEL, a blood cancer, is a large B-cell lymphoma located in the body cavities, described by pleural, peritoneal, and pericardial fluid lymphomatous effusions [49]. In a combined in vitro and in vivo study, Goto et al. [50] examined in depth the antitumor activity of BBR against PEL. Their work employed multiple in vitro biochemical assays, where BBR has successfully inhibited the proliferation of KSHV sequence-positive PEL (BC-1, BCBL-1, and TY-1) cells with 50% inhibitory concentration (IC50) values of 13.56, 29.17, and 32.82 µM, respectively. BBR also caused caspase-dependent apoptosis at concentrations of 30 and 100 µM. The mechanisms were found to relate to the ability of BBR to block nuclear factor κB (NF-κB) activation by impeding IκB kinase (IKK) phosphorylation, IκB phosphorylation, and IκB degradation, upstream targets of the NF-κB pathway, in PEL cells. Additionally, the authors used a xenograft mouse model to confirm the in vitro results, where treatment with BBR (at a dose of 10 mg/kg) significantly hindered the growth and invasion of PEL cells compared to untreated mice.
Although we reviewed the promising role of BBR in preventing recurrent EBV infection and its connected cancers and KSHV-associated malignancies as well, additional in-depth studies that incorporate BBR into EBV and KSHV research are needed. Such studies should consider some facts that both viruses can control the host epigenetic machinery and contribute to the early phases of tumor development by initiating oncogenic changes within the cell, with the ability to hide using a strategy “hit and run’’ [51]. These facts make treatment of EBV and KSHV infections hard to efficiently manage. Therefore, we discuss in a later section various approaches to overwhelm these barriers.

2.3. Berberine’s Mechanisms against γ-Herpesviruses and Their Linked Malignancies

We have discussed above that in various in vitro and animal experiments, BBR has been shown to modulate the expression of a variety of genes and proteins and target several pathways involved in tumorigenesis connected with EBV and KSHV infections [35][36][39][40][50]. Moreover, we documented the capability of BBR to suppress EBV latent and lytic infection by affecting the expression of the transcription factor BZLF1, which is a critical factor required for viral replication [35]. Thus, in this section, we summarize these mechanisms and pathways in Figure 2, especially for readers who prefer to look at display items. 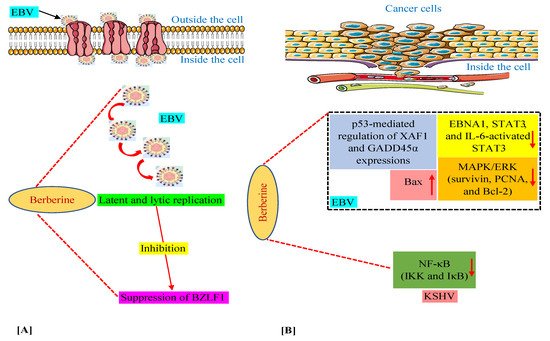 3. Berberine between Inflammation and Cancer 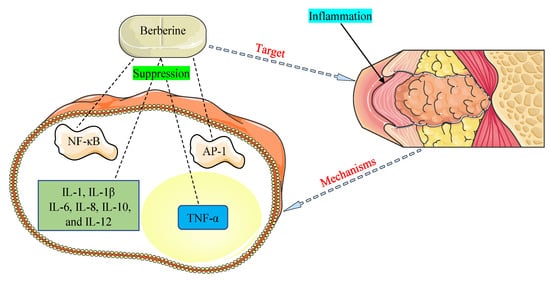 More
© Text is available under the terms and conditions of the Creative Commons Attribution (CC BY) license (http://creativecommons.org/licenses/by/4.0/)
Upload a video for this entry
Information
Subjects: Virology
Contributor MDPI registered users' name will be linked to their SciProfiles pages. To register with us, please refer to https://encyclopedia.pub/register :
Sherif T.S. Hassan
View Times: 108
Revisions: 2 times (View History)
Update Time: 02 Jun 2021
Table of Contents
1000/1000
Hot Most Recent