Submitted Successfully!
Thank you for your contribution! You can also upload a video entry related to this topic through the link below:
https://encyclopedia.pub/user/video_add?id=10377
Check Note
2000/2000
Adipose Tissue and FoxO1
Edit
This entry is adapted from 10.3390/cells9040849

Forkhead box O class proteins (FoxOs) are expressed nearly in all tissues and are involved in different functions such as energy metabolism, redox homeostasis and differentiation. The plasticity of FoxOs is demonstrated by post-translational modifications that determine diverse levels of transcriptional regulations also controlled by their subcellular localization. Among the different members of the FoxO family, we focused on FoxO1 in adipose tissue, where it is abundantly expressed and is involved in differentiation and transdifferentiation processes. The capability of FoxO1 to respond differently in dependence of adipose tissue subtype underlines the specific involvement of the transcription factor in energy metabolism and the “browning” process of adipocytes. FoxO1 can localize to nuclear, cytoplasm, and mitochondrial compartments of adipocytes responding to different availability of nutrients and source of reactive oxygen species (ROS).

The mammalian Forkhead box O (FoxO) family includes four members expressed nearly in all tissues: FoxO1 (forkhead in rhabdomyosarcoma, FKHR), FoxO3 (forkhead in rhabdomyosarcoma like protein 1, FKHRL1), FoxO4 (acute leukemia fusion gene located in chromosome X, AFX), and FoxO6 [1]. They are characterized by the evolutionarily conserved forkhead domain, which is a winged-helix DNA binding motif that recognizes the core DNA motif TTGTTTAC [2]. Other conserved domains shared by the four FoxO members are the nuclear localization sequence (NLS), the nuclear export sequence (NES), and the C-terminal transactivation domain (TD). FoxO1 plays an important role in many tissues being involved in the regulation of cell cycle and cellular metabolism [3]. In skeletal muscle, FoxO1 controls energy homeostasis, modulating glucose and fatty acid metabolism, whereas in the liver it largely maintains whole-body glucose homeostasis [3][4][5][6]. However, FoxO1 is massively expressed in the adipocytes, where it organizes the transcription of genes related to adipocyte differentiation and transdifferentiation, oxidative stress defense, and lipid metabolism [7][8] (Figure 1). It regulates energy homeostasis through the modulation of the size of adipocytes and the adaptations to calorie intake [7][9]. Consistently, FoxO1 positively responds to increased mitochondrial reactive oxygen species (ROS) produced by starved adipocytes, determining the transcription of mitochondrial anti-stress response genes (mitohormesis). More importantly, FoxO1 is one of the most significant transcriptional factors involved in the insulin/insulin-like growth factor 1 (IGF-1) signaling pathway, responding to nutritional fluctuations via nucleocytoplasmic shuttling [10]. Notably, our recent study has also shown the existence of a mitochondrial FoxO1, under basal metabolic condition, that is delocalized by nutrient deprivation [10], which expands the dynamic role of this transcription factor in the control of adipocyte homeostasis. 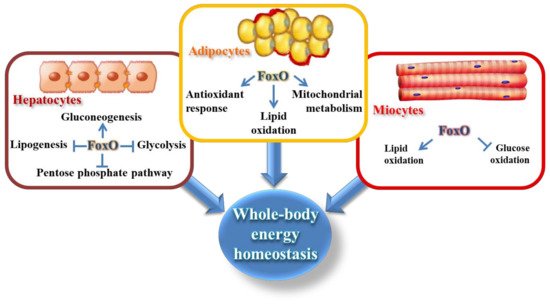 Figure 1. Scheme of the main metabolic pathways regulated by Forkhead box O (FoxO) proteins in the liver, adipose tissue, and muscle that are involved in the maintenance of systemic energy homeostasis.

Adipose tissue has the main function to store energy inside adipocytes in the form of neutral lipids during excess nutrient conditions and to release them by lipolysis during fasting, to guarantee whole-body energetic homeostasis. Indeed, adipose tissue is a very dynamic organ that rapidly readapts under many physiological stimuli, by changing number, size, metabolic and endocrine functions of adipocytes [11]. Adipocytes are dispersed in two main adipose depots: the white adipose tissue (WAT) and the brown adipose tissue (BAT). Each type of adipose tissue has a distinct physiological role. White adipocytes have the main function of triglyceride storage in a single unilocular lipid droplet [12], whereas BAT is not implicated in energy storage, but it is specialized in the control of non-shivering thermogenesis. The brown adipocytes contain high numbers of mitochondria, that confer the typical brown color, and multilocular lipid droplets [12].

A third type of adipocytes, characterized by an intermediate phenotype between white and brown adipocytes, is mainly interspersed in subcutaneous WAT. These are known as “brite” or “beige” adipocytes which could develop a thermoregulatory behavior while maintaining the energy reserve in lipid droplets, like white adipocytes. The beige adipocytes are activated in response to environmental cues, such as chronic cold exposure: this process is defined as “browning” of white adipose tissue [13].

Responding to insulin and glucagon respectively during feeding and fasted state, the adipose tissue activates precise molecular pathways able to modify the expression and subcellular localization of metabolic enzymes and transcription factors [14]. Feeding stimulates the lipogenic pathway and storage of triglycerides in adipocytes, while fasting induces the activation of the lipolytic pathway and promotes the breakdown of triglycerides and the release of free fatty acids from adipose tissue [11][15][16]. In this scenario, FoxO1 inactivation by insulin signaling is necessary for activating the lipogenic program in adipocytes, whereas, in the fasted condition, it transcribes genes involved in lipid catabolism [7].

Adipogenesis is the process through which fibroblast-like preadipocytes deriving from mesenchymal precursors differentiate into mature insulin-responsive adipocytes [17]. The persistent inhibition of FoxO1 before induction of differentiation by the selective antagonist AS1842856 [18] or by a silencing procedure [19] suppresses almost completely the adipogenesis. Nevertheless, the role of FoxO1 in adipogenesis is complex and tightly tuned, as it can act as a promoter or inhibitor according to the steps of differentiation. In support of this, FoxO1 expression is promptly induced after stimulation of adipogenesis [20], but its activation state  is not maintained during the whole adipogenic differentiation process [18]. This is in agreement with the fact that FoxO1 inhibits the master regulator of adipogenesis and fat storage [PPARγ [18][21]. Based on this, the antagonizing FoxO1 function may be useful for overcoming dysmetabolic conditions associated with the insulin pathway. For instance, the haploinsufficiency of FoxO1 in heterozygous insulin receptor knockout mice or high fat-fed mice has been shown to restore the size of white fat cells, ameliorating insulin sensitivity [20][22]. Transgenic mice overexpressing the dominant-negative FoxO1 (the C-terminal transactivation domain is truncated) in WAT displayed ameliorated insulin sensitivity, glucose tolerance, and increased energy expenditure [9]. This augments fat mass, restoring adipocyte differentiation, and upregulates GLUT4 and adiponectin expression [9].

It is interesting to note that GLUT4 membrane translocation and nuclear exclusion of FoxO1 are parallel and independent events downstream of insulin/IGF-1 signaling in the terminal differentiation of adipocytes when GLUT4 permits glucose-dependent lipogenesis, whereas the absence of FoxO1 allows PPARγ transcriptional activity. This is corroborated by the fact that the translocation of GLUT4 to the cell surface is blunted, while the nuclear exclusion of FoxO1 is maintained in adipocytes with compromised insulin signaling (hyperinsulinemia) [23]. More specifically, FoxO1 is fully responsive to physiologically relevant insulin concentration in the insulin-resistant adipocytes, while GLUT4 is not [23]. The permanent nuclear exclusion of FoxO1 during hyperinsulinemia leads to the progression of adipocytes differentiation, repressing the lipolytic pathway and enhancing triglyceride accumulation [24]. In the long-term, impaired lipid utilization in adipocytes might have deleterious outcomes; in fact, enlarged adipocyte size has been correlated with changes in adipocyte function and metabolic disease [25]. Therefore, the difference in the sensitivity of GLUT4 and FoxO1 to insulin would lead to an uncoupling of insulin regulation of glucose transport and lipid storage in adipocytes [23].

2.2. FoxO1 Involvement in the Browning Phenotype

In addition to the regulation of WAT differentiation and homeostasis, FoxO1 acts as a negative regulator of both de novo differentiation of brown adipocytes and in the white-to-brown transdifferentiation of mature adipocytes. One of the earliest evidence showing that FoxO1 affects thermogenic BAT is that the overexpression of the dominant-negative FoxO1 in BAT increases oxygen consumption, energy expenditure, and mitochondrial metabolism by upregulation of UCP1 and PGC-1α [9]. A critical step in the establishment of  mature brown adipocytes is mediated by insulin signaling that accounts for  FoxO1 inhibition and CREB activation [26][27]. Among the other mechanisms, the combined regulation of CREB and FoxO1 downstream of insulin signaling is necessary to block the expression of necdin [28], a crucial molecule showing inhibitory effects on brown adipocyte differentiation [29].

The evidence that FoxO1 can dampen the thermogenic program in adipose tissue has been also confirmed by a study centered on the “browning” process. In fact, during white-to-brown conversion stimulated by cold exposure or forskolin treatment (a pharmacological agent that raises intracellular cAMP levels [30]), FoxO1 undergoes inactivation by the co-repressor ZFP238 that, in this way, allows the expression of UCP1 and mitochondrial biogenesis-associated genes [31]. Moreover, the use of the FoxO1 antagonist AS1842856 significantly reduced TFEB expression, a key regulator of autophagosome and lysosome biogenesis, with consequences on the coordinated expression of UCP1/2/3 during adipocytes differentiation [32][33].

3. FoxO1 Response to ROS in Adipocytes

Hormonal stimulation of adipocyte differentiation in human adipose tissue-derived stem cells results in a transient increase of intracellular ROS deriving from the mitochondrial activity and NADPH oxidase (NOX) activation. The transient increase of ROS during adipocyte differentiation is accompanied by the upregulation of FoxO1, the transcriptional activity of which is necessary for mounting antioxidant response via the upregulation of superoxide dismutase 2 (SOD2), catalase, and Glutathione peroxidase 1 (GPx1) to avoid detrimental oxidative stress. In this way, ROS production is tightly balanced during adipogenic differentiation, as the enhancement of the hormone-stimulated process due to NOX4 overexpression is accompanied by no further ROS accumulation [34].

ROS generated by the redox adaptor protein p66Shc, which is known to activate membrane-bound NOX, were demonstrated to concur to insulin-dependent activation of AKT and FoxO1 translocation to the cytoplasm [35]. The most prominent metabolic role of FoxO1 in adipose tissue is played under ROS produced by the fasted state where it is recruited inside the nucleus promoting the transcriptional network associated with antioxidant response (SOD2, UCP1) and lipid metabolismMore specifically, activation of the proline oxidase/dehydrogenase (POX/PRODH), a mitochondrial inner-membrane enzyme that starts proline catabolism, contributes to generate ROS under nutrient shortage [36]. More recently, the evidence that FoxO1 also resides in mitochondria of adipocytes has expanded the dynamic role of this transcription factor in the control of adipose tissue adaptation to nutrient availability [10]. FoxO1 changes its intra-compartmental localization between the nucleus, cytoplasm, and mitochondrion in response to ROS associated with nutrient fluctuations and other prooxidant sources. At the mitochondrial level, FoxO1 is present also as phosphorylated isoform in the organelle matrix of white/beige adipocytes to mitigate the expression of oxidative phosphorylation subunits encoded by the mitochondrial DNA under fed conditions [10]. Conversely, in response to starvation, FoxO1 disappears from mitochondria in a ROS-dependent fashion, as a consequence of dephosphorylation mediated by the phosphatase PTPMT1. Therefore, FoxO1 response to nutrient stress downstream of ROS-mediated signaling allows retrograde communication via subcellular redistribution. In this way, adipocytes avert energetic collapse by improving oxidative capacity and buffering the consequent oxidative stress via the enhancement of antioxidant defense.

More
© Text is available under the terms and conditions of the Creative Commons Attribution (CC BY) license (http://creativecommons.org/licenses/by/4.0/)
Upload a video for this entry
Information
Subjects: Cell Biology
Contributor MDPI registered users' name will be linked to their SciProfiles pages. To register with us, please refer to https://encyclopedia.pub/register :
MARIA Rosa Ciriolo
View Times: 90
Revisions: 3 times (View History)
Update Time: 02 Jun 2021
Table of Contents
1000/1000
Hot Most Recent