Submitted Successfully!
Thank you for your contribution! You can also upload a video entry related to this topic through the link below:
https://encyclopedia.pub/user/video_add?id=10263
Check Note
2000/2000
Singlet Fission
Edit
Upload a video
This entry is adapted from 10.3390/molecules26102922

Singlet fission is a process that occurs in organic molecules upon the absorption of light. It produces a singlet excited state (S1) in one molecule that is shared with a neighbouring one in the ground state (S0), thus splitting into two triplet excited states (T1).

Singlet fission is a process that occurs in organic molecules upon the absorption of light. It produces a singlet excited state (S1) in one molecule that is shared with a neighbouring one in the ground state (S0), thus splitting into two triplet excited states (T1) (Figure 1).

Initially, the two triplets are coupled in an overall singlet biexciton (1TT). The process is thus spin-allowed and, consequently, proceeds rapidly. The existence of this intermediate state has been a subject of a long-standing controversy[1], resolved just recently by providing the first direct spectroscopic evidence that 1TT is a real stage in the fission of the singlet state[2]. The next step is the dissociation of the biexciton into two independent triplet excitons.

Most of the studies on singlet fission have been focused on intermolecular singlet fission in molecular crystals, in which the coupling of the two chromophores occurs through space. Singlet exciton, however, can also interact with its neighbouring ground state molecule through bond to create a triplet pair. In other words, the two chromophores can be covalently bound in a single molecule[3][4] – which is the definition of intramolecular SF (iSF). In the latter, the two triplet excitons are “located” on different parts of the same molecule. The presence of a chemical fragment, connecting the two centers, allows for an interaction through the bonds, which is impossible in molecular crystals.

The article that coined the term “singlet fission” was published in 1963 after an extensive study on anthracene crystals[5]. The process dynamics in the next representatives of the acene series – tetracene and pentacene – were examined soon after. It turned out that singlet fission in tetracene is a relatively slow process with temperature-independent dynamics, whereas the singlets of pentacene fission to pairs of triplets really fast, irrespective of the excitation wavelength[6][7][8]. Thus, these materials were historically the principle singlet fission chromophores.

M.-E. Michel-Beyerle is one of the pioneers in the field. In 1978, her group reported excitation spectra of singlet fission into a pair of triplet excitons in organic crystals of anthracene and perylene[9]. Direct singlet fission has been observed from two-photon excited upper electronic states in a single crystal of rubrene and α-perylene. A fast singlet fission process was found to proceed in both of them in three different ways: (i) from the upper excited electronic states Sn, (ii) from the upper vibrational states of S1, (iii) and via two-step two-photon absorption to Sn[10].

All natural and artificial systems that are able to transform solar energy – from leaves on a tree to photovoltaic cells – do so through really fast processes at the atomic and molecular level. While nature can elegantly control these processes, synthetic light-harvesting is tricky because of the low yields of photovoltaic cells: for the most successful inorganic ones, the maximum efficiency is only 33%[11]. While inorganic solar cells are broadly available on the market, conventional organic photovoltaic devices are far from the large-scale manufacturing stage due to their much lower and non-competitive productivity. Fortunately, it became clear recently that singlet fission in organic materials is a promising way to circumvent the 33% limit[12]. If harnessed in photovoltaic cells, singlet fission could boost sizably the efficiency of the latter – the doubled number of created excitons could lead to a doubled number of free charges.

The most emblematic publication on singlet fission, cited more than a thousand times to date, was the review, authored by M. Smith and J. Michl in 2010[13], where the minimum energy conditions for a material to exhibit singlet fission were defined. The process is thermodynamically efficient when it is exoergic or isoergic, which means that the excitation energy to the first singlet excited state exceeds the doubled excitation energy to the first triplet excited state: E(S1) ≥ 2E(T1). To ensure that singlet fission outruns competing processes like triplet-triplet annihilation, there is another condition, concerning the excitation energy to the first and second triplet excited states: E(T2) ≥ 2E(T1). M. Smith and J. Michl summarized the theory behind the process and listed the singlet fission materials examined until then. Their seminal work turned out to be the fuel needed, so the next three years saw enormous research interest in singlet fission materials that could contribute to the reduction of the environmental burden. In 2013, the two authors published their second updated review on the topic, recapitulating the newly gained knowledge[14]. Since then, the process of singlet fission has emerged as the frontrunner in the field of organic photovoltaics, attracting the keen interest of more and more researchers[15][16][17][18][19][20] from all over the world (Figure 2). 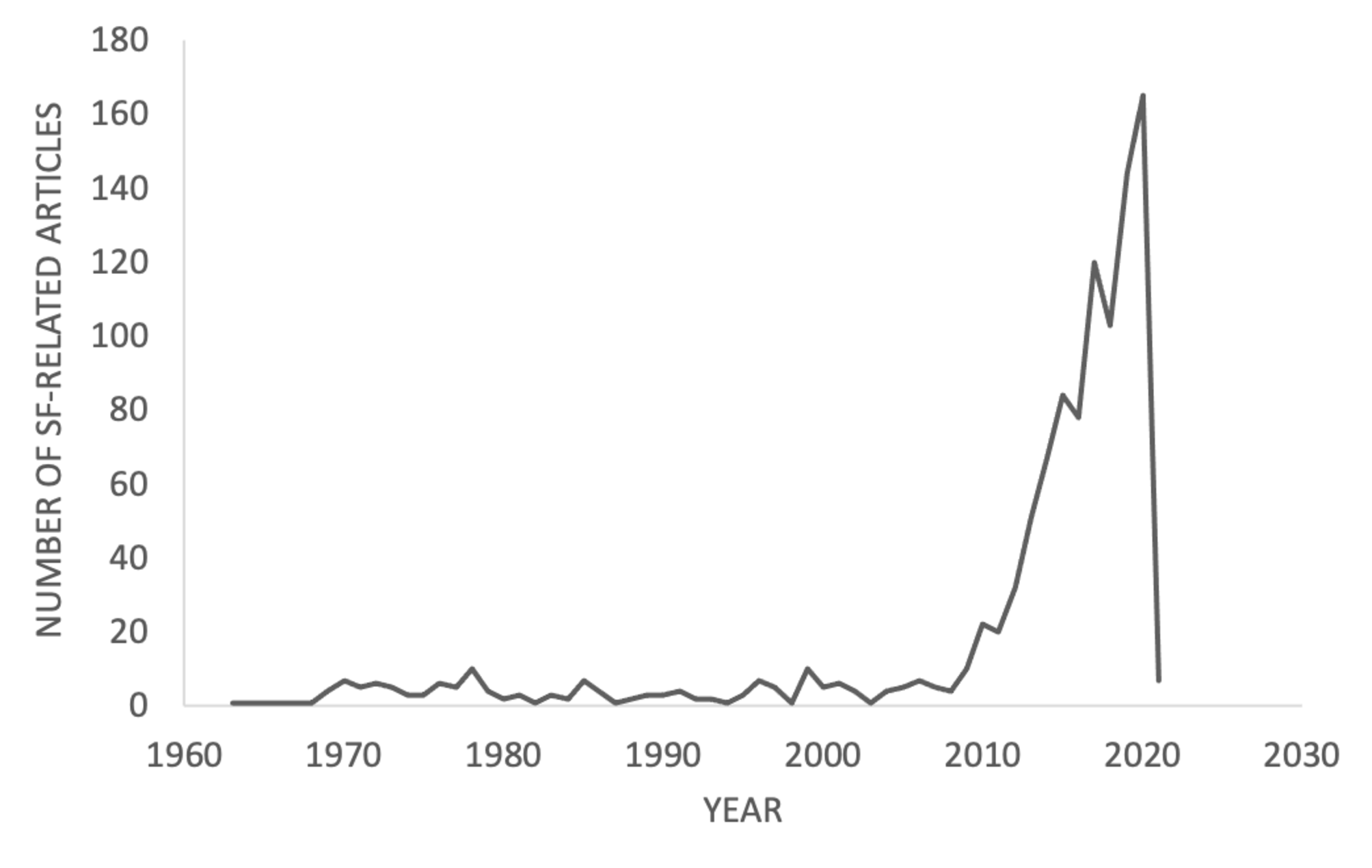 Figure 2. The number of singlet-fission(SF)-related articles published from 1963 until 2021.

4. The diradical view on singlet fission

Recently, an alternative descriptor, related to the propensity of a chromophore for singlet fission, was revealed – the diradical character (DRC) of the molecule[21]. DRC is an experimentally non-measurable property that quantifies how “open” is the shell of the system and presents a measure of its stability and chemical reactivity. It takes a value, ranging from 0 (closed shell) to 1 (pure diradical). It has been demonstrated that molecules with DRC from 0.1 to 0.5, namely with a low-to-intermediate diradical character, are among the successful singlet fission candidates. This gave a push to an assiduous molecular modelling for the design of SF materials. In most cases, two alternative approaches were exploited: either starting from a perfect biradical and stabilizing it partially[22] or starting with a stable chromophore and destabilizing it sufficiently[23]. However, the potential chromophores with semi-open-shell character cannot be reliably treated further by the conventional modelling methods, while the reliable ones are slow and costly, so simplifications of the latter have been suggested[24].

Besides the two feasibility conditions, the requirements to the perfect SF chromophore become even more demanding when taking into account its photovoltaic properties. In order to serve as a donor in a photovoltaic cell, the perfect SF chromophore should absorb intensively at about 2 eV (where lies the radiation intensity maximum of the solar spectrum) and also has to be stable. The latter is not an easily accomplishable condition because on the one hand, the low to intermediate DRC is a requirement for SF but on the other hand, most of the molecules with open-shell character are usually unstable in air and highly reactive. Due to the demanding nature of all requirements, a relatively small number of known singlet fission chromophores exists and the structural variety among them is modest. This is a clear indication that the knowledge of the structure-property relationship in such systems is still limited and that we are on the eve of a molecular design revolution in the field. The discovery of new singlet fission chromophores will increase the structural diversity, which in turn will broaden the avenues for fine tuning of the molecular response at the supramolecular level. Therefore, many researchers focus on the molecular design of new singlet fission chromophores.

A promising design strategy[25] of SF candidates is based on doping polycyclic aromatic hydrocarbons (PAHs). The latter obey the 4n+2 Hückel rule[26], but a doping that changes the π-electrons by 2 makes the systems antiaromatic and, at the same time, raises their singlet fission proclivity. This can be achieved, for example, by appropriate N-[25] or B-doping[27] of PAHs. A witty recipe for the design of singlet fission chromophores is based on captodative biradicaloids – open-shell species, carrying both an acceptor and a donor group that are stabilized by direct interaction between their radical centers. Recently, it was demonstrated that carbene dimers are also fruitful singlet fission chromophores. Their diradical character can be tuned by the electronegativity of the α-C substituent and the type and length of the linker between the carbene units.

The tunability of the singlet fission propensity by the type and length of the linker is a key strategy in designing iSF compounds. It was also demonstrated that in the case of iSF dimers cannot sustain well separated triplets and, hence, effective triplet yield. Trimer, tetramer, and longer oligomers do not suffer from spatial hindrance and therefore can support stable multi-excitonic states[28]. This brought to the stage polymers as SF candidates, particularly donor-acceptor copolymers. There, the lowest singlet excited state S1 displays charge transfer character from the donor to the acceptor unit(s) and the other relevant states, the triplet ones, are localized on the acceptors[29]. In this way, the latter are separated by the donor unit, which is believed to suppress the recombination of triplets.

In the age of artificial intelligence and robotics, one of the most promising strategies for molecular design is the high-throughput screening of massive databases. Therefore, naturally arises the question whether a large scale computational screening is possible that will overcome the 'searching for a needle in a haystack' situation in SF chromophores. A recent study reported a library of 81 dimers of donor–acceptor copolymers, and this was only their first step towards the creation of a database of such. The library consists of well-established heterocycles that can be easily synthesized. Such a database of donor–acceptor polymer pairs and molecular linkers, permits the performance prediction of a certain material in a photovoltaic device and can incredibly accelerate the process of discovering new and better iSF materials[30]. The same is true for the creation of molecular-descriptors-based AI structure-property models, allowing prescreening of existing databases for sampling of prospective SF candidates.

The feasibility conditions and the diradical character quantify the singlet fission propensity of a material at the molecular level, but they represent only one piece of the puzzle, regarding the phenomenon. Wider picture of the singlet fission process can be obtained by taking into account the interaction between the chromophores (chromophore coupling). It has been demonstrated that the intermolecular interaction has a crucial impact on the final performance[31], and that singlet fission efficiency is governed by the type and strength of chromophore coupling.

The two most frequently considered mechanisms of the singlet fission process are the direct nonadiabatic transition from S1 to 1TT and the transition, mediated by charge transfer structures. There are two factors, explaining how an excited state evolves from a singlet to two triplets[32]: on the one hand is the energetics, on the other hand is the coupling. Of big importance for the singlet fission efficiency is the molecular packing[33][34] and the degree of overlap between the individual chromophores. It was proved that charge-transfer structures mediate the single-to-multiexcitonic through-space transition, which is sensitive to intermolecular distance and orientation and which can be tuned by crystal compression in a specific direction[35].

Theoretical calculations have shown that the interactions through covalent bonds are stronger than those through space[36] and it has been demonstrated that for iSF the direct coupling mechanism is operative avoiding the charge-transfer step[37].

The feasibility conditions may be considered sufficient for the conversion of a singlet exciton into a pair of coupled triplet ones, but the dissociation of the latter is another bottleneck for the efficient utilization of the process.

The incidence of endothermic singlet fission evidences that the detailed elucidation of the mechanism is still incomplete.

7. From theory to real world application

Singlet fission offers routes to entirely new device architectures. In order for the latter to be technologically competitive, the precise control of energetics is required. There has been significant recent progress towards incorporating singlet fission layers into a heterojunction with a second light harvester and a lower bandgap. Such a hybrid device was produced in 2018 by combining crystalline silicon with tetracene interlayers[38]. It turned out stable, with c-Si remaining well-passivated by the organic film. This architecture is one of many that have the opportunity to open new horizons for the photovoltaics market[39][40].