Submitted Successfully!
Thank you for your contribution! You can also upload a video entry related to this topic through the link below:
https://encyclopedia.pub/user/video_add?id=10254
Check Note
2000/2000
Mineral Physics
Edit
Upload a video

Mineral physics is the study of mineralogical problems through the application of condensed matter physics and solid-state chemistry.

The ﬁrst scientiﬁc conference focused on mineral physics was held at the Airlie House in Warrenton, Virginia in October 1977. In the ensuing years, many other meetings were convened, dedicated journals were founded, national programs were established, all of which marked the emergence of the discipline of mineral physics into the mainstream of geosciences. At the onset of the 21st century, mineral physicists found themselves with many challenging problems and many exciting opportunities for research at high pressures and temperatures, made possible in large measure to access to synchrotron radiation facilities throughout the world. In this paper, we highlight this evolution of the ﬁeld of mineral physics over this period [1].

2. History and Evolution of Mineral Physics

Although many investigators worked on problems related to mineral physics during the latter half of the 19th century and the early 20th century [e.g, Erskine Williamson at the Geophysical Laboratory of the Carnegie Institution of Washington, two outstanding contributors were from Harvard University. Percy Bridgman became a Harvard professor in 1919 and devoted his entire scientiﬁc career to investigating the properties of matter under high pressure. His opposed-anvil apparatus enabled him to achieve pressures up to 10 GPa and led to important discoveries related to properties of solids and liquids, for which Bridgman received the Nobel Prize in Physics in 1946. The second major contributor from Harvard was Francis Birch, who was a graduate student in Bridgman’s high-pressure laboratory [as were David Griggs and George Kennedy]. In 1932, two new research ventures were initiated at Harvard: a revitalized program in seismology and a program for comprehensive high-pressure studies devoted to geophysical problems. Birch was invited to lead the new high-pressure research program as Harvard’s ﬁrst research associate in geophysics.  His most significant contribution appeared in one of the classic papers of geophysics on ‘‘Elasticity and constitution of the Earth’s interior’’ [2]. Here, he conclusively demonstrated that (1) the mantle is predominately composed of silicate minerals; (2) the upper mantle and lower mantle regions, each essentially homogeneous but of somewhat differing compositions, are separated by a thin transition zone associated with silicate phase transitions; and (3) the inner and outer core are alloys of crystalline and molten iron, respectively, rather than alternative interpretations proposed at the time. The essential details of this model are still valid; only a few reﬁnements have been necessary in the light of subsequent research.

According to Robert Hazen [3], “mineral physics is the study of mineralogical problems through the application of condensed matter physics”. In reality, mineral physicists use not only physics but also solid-state chemistry. In addition, they study not only minerals but all materials related to natural minerals (e.g., structural analogs, but also glasses, melts, and ﬂuids).  Although he never used the term, Francis Birch is widely acknowledged as the ‘‘father of mineral physics.  Orson Anderson often cited the German physicist Eduard Grüneisen as the person who ﬁrst introduced the term mineral physics [4][5].

How did the term ‘‘mineral physics’’ become adopted to deﬁne an area of research in the geosciences?  Mineral physics is not really a new way of performing research, but it focuses on areas of research that formerly were treated largely as separate from each other. In the mid 20th century, geophysics and mineralogy were two avenues in the overall picture of earth sciences, rarely talking with each other with one based on largescale earth studies such as geomagnetism and seismology, and the other one classifying minerals based on color, hardness, optical properties, and diffraction patterns. Then, geophysicists began to become more interested in the physical properties of minerals and mineralogists began to explore how physical properties depend on atomic structure along with exploiting new tools such as automated X-ray diffractometers, electron microprobes and microscopes, various kinds of spectrometry, digital computers, and synchrotron radiation sources, all of which became generally available to geoscientists in the second half of the 20th century.

Mineral physics has grown as an international discipline in the Earth sciences and is being pursued in many university academic communities with concomitant funding from a wide array of funding agencies; e.g., NSF, DOE, NASA.  It has become a significant subject of many papers in the journals of the American Geophysical Union; it is also a new section of the AGU [Mineral and Rock Physics].  Thus, the history of mineral physics is of interest, not only to those working in this field, but also to those I seismology, tectonophysics, volcanology, geochemistry and petrology, whose research depends on understanding the role of the fundamental properties of minerals.

The links between mineral physics and other disciplines of geosciences is represented by this graphic designed by Quentin Williams and modified by Ann Lattimore; as such, it has become known as the Williams-Lattimore diagram in the mineral physics world [6]. 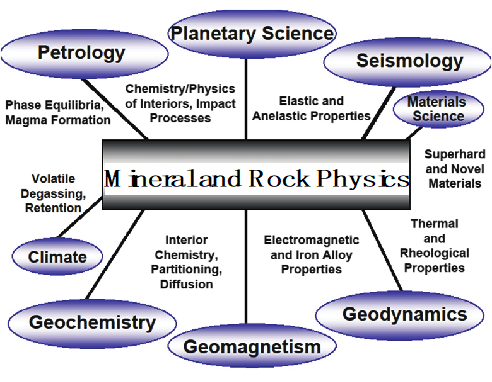 More
© Text is available under the terms and conditions of the Creative Commons Attribution (CC BY) license (http://creativecommons.org/licenses/by/4.0/)
Upload a video for this entry
Information
Subjects: Geography, Physical
Contributor MDPI registered users' name will be linked to their SciProfiles pages. To register with us, please refer to https://encyclopedia.pub/register :
Robert Liebermann
View Times: 348
Entry Collection: Environmental Sciences
Revisions: 3 times (View History)
Update Time: 31 May 2021
Table of Contents
1000/1000
Hot Most Recent