Submitted Successfully!
Thank you for your contribution! You can also upload a video entry related to this topic through the link below:
https://encyclopedia.pub/user/video_add?id=10216
Check Note
2000/2000
Fibroblast Growth Factor-23
Edit
Upload a video
This entry is adapted from 10.3390/cells10051266

Fibroblast growth factor-23 (FGF23) appears to be one of the most promising biomarkers and predictors of cardiovascular risk in patients with heart disease and normal kidney function, but moreover in those with chronic kidney disease (CKD).

1. FGF23 Signaling in the Physiological Milieu

FGF23 is a phosphaturic hormone primarily secreted by osteocytes to maintain phosphate and mineral homeostasis. It stimulates phosphate excretion, inhibits PTH secretion, and decreases active vitamin D levels [1][2]. FGF23 was portrayed as a crucial player in the pathogenesis of a variety of hypophosphatemic disorders, including autosomal dominant hypophosphatemic rickets, tumor-induced osteomalacia, and X-linked hypophosphatemic rickets [3].
Osteocytes and osteoblasts mainly produce FGF23. However, low FGF23 messenger RNA (mRNA) levels are detected in the brain, thymus, spleen, small intestine, heart, and testis [4].
It belongs to the superfamily of fibroblast growth factors (FGF) that exert pleiotropic effects on a vast range of biological processes, including the development of organogenesis and metabolism, being an essential part of the endocrine subfamily. While not all FGFs express endogenously in the heart of humans and rodents, FGF2, FGF3, FGF8, FGF9, FGF10, FGF16, FGF15/19, FGF21, and FGF23 act on the heart in a paracrine or endocrine manner inducing physiological or pathological pathways in the heart development, health, and disease [5]. While the paracrine FGFs are not secreted and do not exert their biological functions within the same cell, endocrine FGFs act as endocrine hormones in targeted tissues [6].
The endocrine family consists of a unique structure lacking conserved heparin (HS)-binding domain, which favors their release from the production source, disadvantaging their FGF receptors (FGFR) activation at targeted organs. They overcome this handicap, binding FGFR by the co-receptor klotho. It seems that the Klotho family of membrane proteins may have somehow evolved to increase the affinity of endocrine FGFs to FGFRs at their target organs [7].
Klotho is a membrane protein that divides into three subtypes: α-Klotho, β-Klotho, and γ-Klotho. Although the α- and β-Klotho interact with FGF23 and FGF19/FGF21, respectively, the function of the third member, γ-Klotho, continues to be unclear. FGF23 activates FGFR 1c, –3c, and –4, but not FGFR2, in the presence of cell surface membrane α-Klotho [8].
FGF23 gene encodes 32-kDa glycoprotein of 251 amino acids. The measurement of the plasma half-life of the biologically active form of FGF is reported to be 45–60 min in humans [9]. The biologically active form consists of two parts: N-terminus FGF core homology domain (155 amino acids) that shares homologies with the other FGF family members and a C-terminal domain (72 amino acids), which is essential for interaction with the FGFR-Klotho complex [9][10].

2. FGF23 Signaling in the Uremic Milieu

As patients with CKD are at higher CV risk compared to the healthy population, it is important to understand underlying pathophysiological mechanisms and, subsequently, reduce the mentioned risk. Thus, a reliable biomarker that could estimate CV risk and mortality should be established. Hence, FGF23 was found as a sensitive biomarker elevated in early CKD [11] suitable for timely estimation of CV risk and therapeutical response in order to possibly prevent CV events and decrease mortality in those patients. Nowadays, many clinical trials reported that FGF23 is very close to being introduced into the clinical routine.
Although primarily secreted by osteocytes in bones, CKD patients have higher circulated FGF23 levels mainly due to the declining glomerular filtration and excretion by the kidneys [12][13]. In addition, increased FGF23 production in CKD (due to the impact of secondary hyperparathyroidism, treatment with active vitamin D metabolites, etc.) may contribute to the increased FGF23 plasma levels.
The pathological process starts with binding the FGF23 to its receptor in cardiomyocyte, leading to cardiac remodeling and hypertrophy that could be clinically detected. Therefore and not surprisingly, the prevalence of LVH in the general population is about 15–20% [14], whereas in the CKD population, it’s more than 70% [15].
Although experimental data in mice indicated the relative expression of FGFR3 and FGFR1 in isolated adult ventricular cardiomyocytes is higher compared to FGFR4 [16], the major functional significance in cardiac hypertrophy development seems to belong to FGFR4. Even though previously αKlotho was thought not to be expressed in cardiomyocytes, there are some experimental data indicating still very low expression [16], detected through a very high threshold cycle for αKlotho mRNA levels in the PCR analysis and with no confirmation with in situ hybridization and immunohistochemistry. This would support the fact that the role of αKlotho is not crucial in FGF23 signaling in cardiomyocytes.
It is important to underline that high FGF23 levels induce upregulation of FGFR4 expression, indicating the induction of cardiac hypertrophy via FGFR4 [17]. On the other hand, experimental studies showed that, even on a high phosphate diet, cardiac hypertrophy does not occur when FGFR4 is blocked [18]. Moreover, in experimental settings, cardiac hypertrophy is shown to be reversible [18]. Additionally, even Klotho deficiency, which also exists in CKD, contributes to cardiac hypertrophy development [19].
A generally accepted understanding is that FGF23 binds to the FGFR4 and exerts its mechanism, which is Klotho independent (Figure 1). This binding results in FGFR4 auto-phosphorylation and subsequent binding of phospholipase C y (PLCy) to the phosphorylated FGFR4 sequence activating PLCy [20]. Activated PLCy results in calcineurin activation and nuclear factor of activated T-cells (NFAT) dephosphorylation, which is then translocated to the nucleus with ensuing transcription of pro-hypertrophic genes (brain natriuretic peptide (BNP), regulator of calcineurin 1 (Rcan1), β-myosin heavy chain (β-MHC), atrial natriuretic peptide (ANP), etc.) [21][22][23][24][25]. Of note, ANP and BNP are well-defined markers of cardiac hypertrophy [26]. 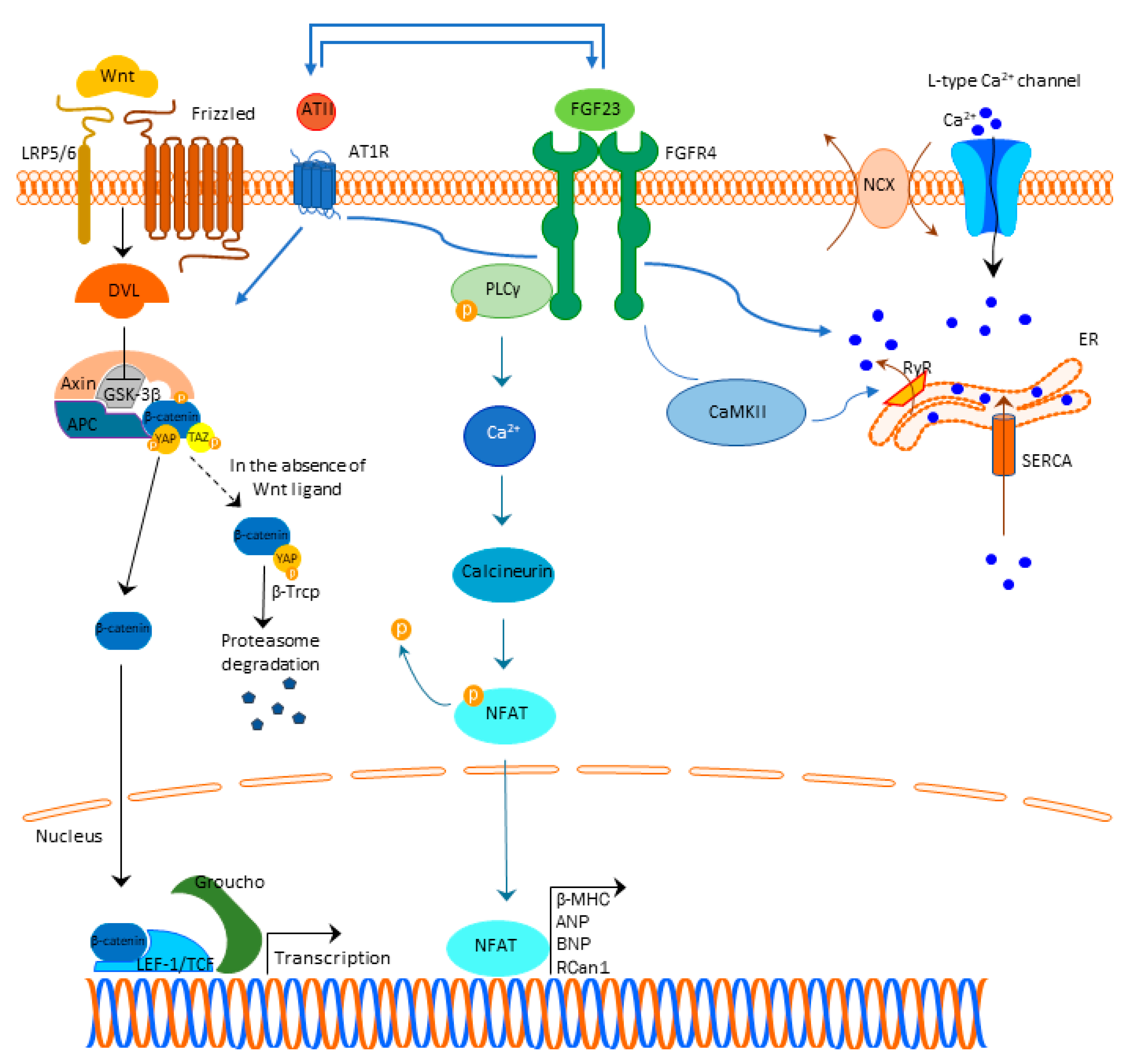 Fibrosis is a process characterized by the production and deposition of an extracellular matrix, that can occur in any tissue or organ. Although it might be protective to a certain extent (for instance, after myocardial infarction when replacing the dead cells or during a scar-formation), it expands in the tissues increasing the mechanical pressure on it and devastating normal functional tissue.
Besides the role in cardiac hypertrophy, current findings indicate that FGF23 is involved in the pathophysiological signaling pathways that result in the development of cardiac fibrosis. Experimental studies in rats pointed out that left ventricular fibrosis did not correlate with FGFR4 and NFAT activation, indicating that the fibrotic process was not mediated through the activation of the FGF23/FGFR4/calcineurin/NFAT pathway [27]. This finding underlines the significance of the other signaling pathways, that are involved in the cardiac fibrosis occurrence, primarily FGF23/Klotho, TGFβ-, Wnt-signaling, and local RAAS.
Unlike cardiac hypertrophy, where the main pathological place occurs in cardiomyocytes, in cardiac fibrosis in addition to cardiomyocytes, the role of fibroblasts appears as crucial. In addition, although FGF23 exerts its mechanism of action by binding to the FGFR4 in cardiomyocytes, in cardiac fibroblasts, FGF23 additionally regulates TGFβ1-signaling by acting on its fibroblast growth factor receptor-1 (FGFR1) expressed in fibroblasts [28]. Experimental studies indicated that FGF23 promotes the proliferation of cardiac fibroblasts and myocardial fibrosis, both associated with the upregulation of active β-catenin and TGF-β [29].
Cardiac damage may lead to a local synthesis of FGF23 in the heart with fibroblasts as main producers increasing their proliferation, migration, and the expression of β-catenin, TGFβ1, fibronectin, and collagen I [29][30].
The cross-talk between TGFβ- and Wnt-signaling is bidirectional. TGFβ1-signaling can induce the expression of β-catenin superfamily members and β-catenin makes a complex with Smads in the nucleus, which stimulates the transcription of profibrotic genes [31]. TGFβ is able to deactivate glycogen synthase kinase 3β (GSK3β) directly and to activate Wnt/β-catenin signaling through the production of Wnt proteins [32]. Activated Wnt/β-catenin also stabilizes TGFβ/Smad response, making this co-activation of the two pathways effective in triggering the fibrotic response (Figure 2) [32]. Detailed cross-talk between TGF-β, Wnt, and YAP/TAZ is beyond the scope of this review but is nicely summarized in the review of Piersma et al. [33]. 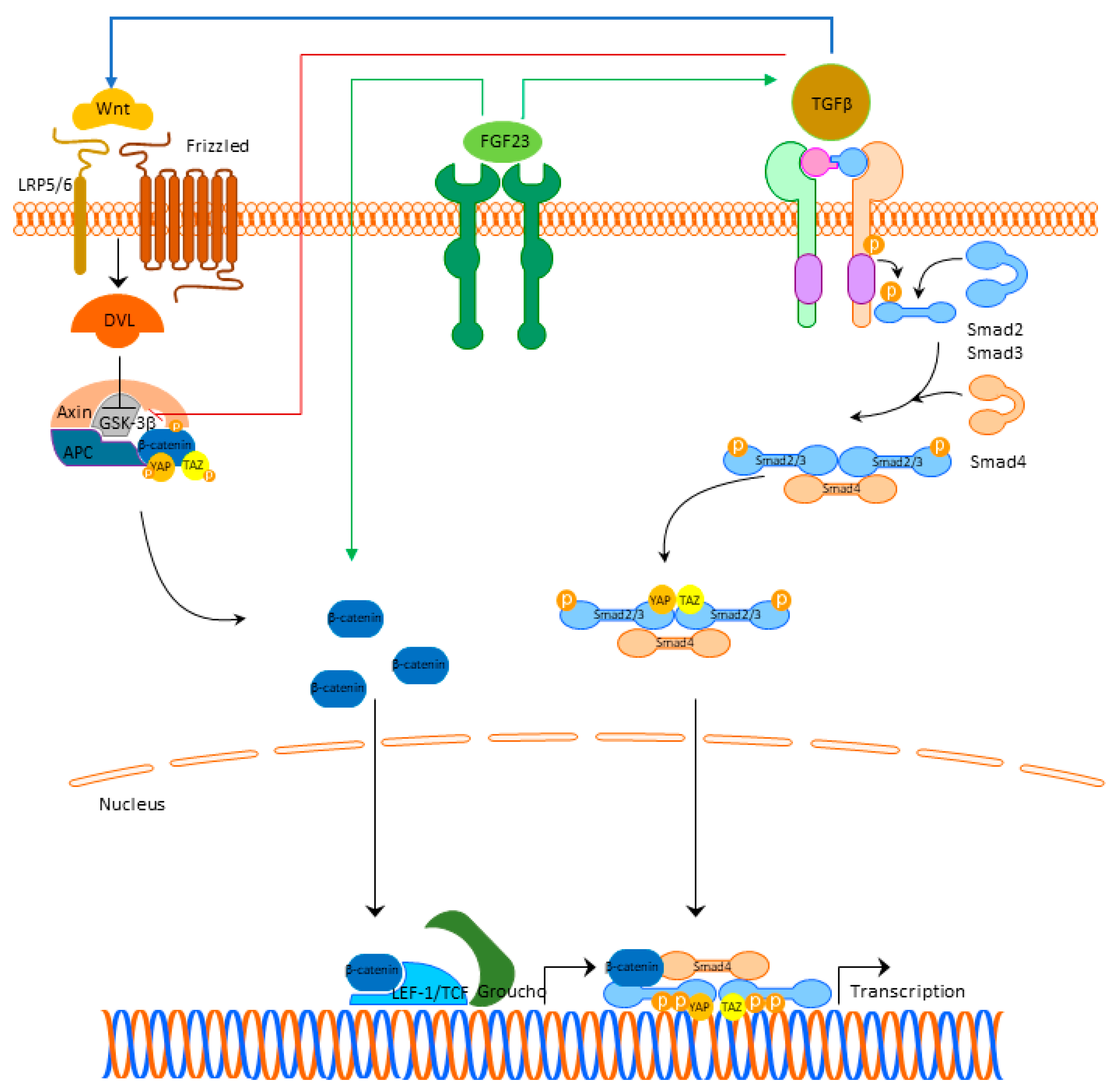 More
© Text is available under the terms and conditions of the Creative Commons Attribution (CC BY) license (http://creativecommons.org/licenses/by/4.0/)
Upload a video for this entry
Information
Subjects: Biology
Contributor MDPI registered users' name will be linked to their SciProfiles pages. To register with us, please refer to https://encyclopedia.pub/register :
Andreja Figurek
View Times: 105
Revisions: 2 times (View History)
Update Time: 31 May 2021
Table of Contents
1000/1000
Hot Most Recent