Submitted Successfully!
Thank you for your contribution! You can also upload a video entry related to this topic through the link below:
https://encyclopedia.pub/user/video_add?id=10063
Check Note
2000/2000
Rejuvenate Aging Cells and Tissues
Edit
Upload a video
This entry is adapted from 10.3390/ijms22083990

Rejuvenate aging cells and tissues is strategies to delay and potentially even reverse the aging process.

As we age, we become increasingly vulnerable to age-related diseases. The progressive aging of the population makes this issue one of, if not the, major current scientific concern in the field of medicine. Aging is an intricate process that increases the likelihood of cancer, cardiovascular disorders, diabetes, atherosclerosis, neurodegeneration and age-related macular degeneration. Developing prophylactic strategies to increase the duration of healthy life and promote healthy aging is challenging, as the mechanisms causing aging are poorly understood, even if great progress has been made from studying naturally occurring or accelerated-aging phenomena. We now know that aging inculcates many changes, or ‘hallmarks’: genomic instability, telomere shortening, epigenetic alterations, loss of proteostasis, cellular senescence, mitochondrial dysfunction, deregulated nutrient sensing, altered intercellular communication, and stem cell compromise and exhaustion [1].

Simply expressing four transcription factors, OCT4, SOX2, KLF4 and c-MYC (OSKM), converts somatic cells into induced pluripotent stem cells (iPSCs) [2]. Reprogramming occurs through a global remodeling of the epigenetic landscape that ultimately reverts the cell to a pluripotent embryonic-like state, with properties similar to embryonic stem cells (ESCs). This cellular reprogramming allows us to imagine cell therapies that restore organ and tissue function. Indeed, by reprogramming a somatic cell, from a donor into iPSCs, these cells can then be modified or corrected before redifferentiation, to produce ‘rejuvenated’ cells, tissues or organs, for replacement in the same donor or an immune-compatible person. In recent years, emerging results have led to new ideas demonstrating that the mechanics of cellular reprogramming can be used to reduce the deleterious effects of aging and to delay these effects by increasing regenerative capacity, either at the cellular or the whole-organism level.

There are two major phases during aging. The first phase is healthy aging, where minor alterations accumulate. Then there is a second phase, so-called pathological aging, in which chronic clinical diseases and disabilities predominate and impair physiological functions [3]. The problems facing our aging population can be studied with a new demographic metric, the Healthy Life Years (HLY) or ‘disability-free life expectancy’ [4], which is defined by the European Statistical Office as the average number of years one can expect to live in the absence of these disorders, within the life expectancy and for a given age.

Deterioration of body functions with age is the main risk factor for major human pathologies and therefore the main factor limiting HLY. Moreover, since advanced age is the common causal influence, these chronic disorders often occur concurrently, as comorbidities, in the elderly [1][3]. Among these major pathologies are cancer, most commonly lung, breast, prostate, and colorectal cancers, and cardiovascular disorders including chronic ischemic heart disease, congestive heart failure, and arrhythmia. The latter two heart diseases are now the two leading causes of death [5][6].

3. The Promise of Pluripotent Stem Cells

Among the approaches to age-related pathological phenotypes, most are aimed at preventing or mitigating cell damage [1]. This involves activating cellular stress resistance mechanisms, either with antioxidant molecules or by suppressing senescent cells to reduce their impact on tissues. This objective of restoring functions of a tissue or an organ, when the regenerative ability of older tissues is reduced, is a foundation of regenerative medicine. Thus, new strategies are currently being developed around stem cells and the use of their regenerative potential to prevent the detrimental effects of aging. In particular, human pluripotent stem cells (hPSCs) including ESCs and, more recently, iPSCs, are an indefatigable source of cells for clinical use [7]. ESCs and iPSCs are pluripotent and therefore have the ability to differentiate into any cell type of the body (with the exception of embryonic appendices). This characteristic, in addition to self-renewal, gives hPSCs a central role in a growing number of new cell therapies aimed at restoring functions of many tissues during aging.

4. New Strategies in Regenerative Medicine to Rejuvenate Cells and Tissues

Taking advantage of cell reprogramming, several strategies can be envisioned to rejuvenate cells and tissues. Two major types of treatment are of note. A classical therapeutic approach is the direct consequence of clinical applications based on the production of differentiated cells from iPSCs to regenerate or replace cells inside a damaged tissue or even replace the entire injured organ (Figure 1). Another more innovative and disruptive process is to act directly on the cells, inside the damaged tissue, to rejuvenate them, without modifying their identity. In the same vein, we can also imagine intervening prophylactically before the appearance of the damage induced by aging. 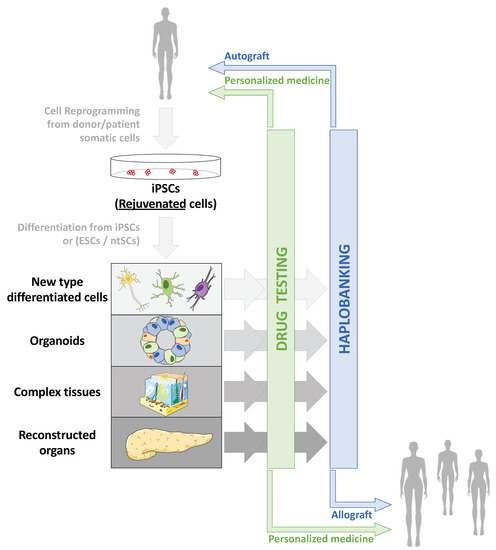 All developments in the ex vivo reproduction of tissue for analytical purposes also benefit clinical applications that aimed at “repairing” humans. In contexts such as the shortage of organs to meet the demand for transplants, the inexistence of therapeutic solutions in certain cases of traumatic injuries or the problem of immune rejection of transplants after transplantation, therapies based on hPSCs and particularly iPSCs are extremely innovative and promising.

As we have just seen, the new therapeutic solutions provided by regenerative medicine benefit, or will benefit, the fight against many age-related diseases. Many age-damaged tissues and organs can already be replaced, or may be considered for replacement in the near future, thanks to ongoing innovations in stem cell research. This would be possible thanks to organs grown ex vivo or produced in animals from iPSCs derived from patient cells. However, there are obstacles to realizing this vision.

“Classical” approaches using iPSCs and derived cells obtained after differentiation are now being intensively studied and developed, and clinical applications, although still in their infancy, are progressing very rapidly. Beyond this, methods based on a direct intervention through partial reprogramming as a strategy against aging have laid the foundations for more disruptive approaches (Figure 2). All these procedures can be used to rejuvenate cells or tissues. 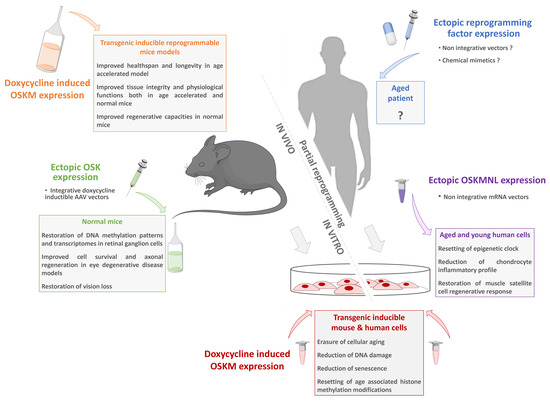 Figure 2. Partial reprogramming toward pluripotency as a new anti-aging strategy. For decades, complete cell reprogramming has been demonstrated to reset somatic cell physiology to a juvenile state equivalent to ESCs. Starting from transgenic models allowing inducible reprogramming factor expression to non-integrative vectors; numerous studies have recently demonstrated that a partial reprogramming is sufficient to restore the general characteristics of cellular aging without changing the identity of the cells. These innovative approaches pave the way for new strategies based on a safe transient reprogramming that can be directly transposed to humans.

More
© Text is available under the terms and conditions of the Creative Commons Attribution (CC BY) license (http://creativecommons.org/licenses/by/4.0/)
Upload a video for this entry
Information
Subjects: Biochemistry & Molecular Biology
Contributor MDPI registered users' name will be linked to their SciProfiles pages. To register with us, please refer to https://encyclopedia.pub/register :
Jean-marc Lemaitre
View Times: 88
Revisions: 3 times (View History)
Update Time: 26 May 2021
Table of Contents
1000/1000
Hot Most Recent