Submitted Successfully!
Thank you for your contribution! You can also upload a video entry related to this topic through the link below:
https://encyclopedia.pub/user/video_add?id=10042
Check Note
2000/2000
Coxiella burnetii
Edit
This entry is adapted from 10.3390/pathogens10050627

Coxiella burnetii is a Gram-negative bacterium that infects numerous animals, including mammals, birds, and arthropods.

In 1958, Syrucek et al. isolated C. burnetii organisms from aborted human placentas [1]. It is now known that placental infection by C. burnetii mostly occurs during the first and second trimesters of pregnancy [2]. Women who are infected during pregnancy are at risk of miscarriage, stillbirth, pre-term delivery, low infant birth weight, and foetal death or malformations (omphalocele, hypospadias, Potter syndrome, congenital hydronephrosis, and syndactyly) and growth retardation [3][4]. It has been shown that women who contract acute Q fever just before pregnancy do not present an increased risk of abortion or premature delivery. In contrast, infection that occurs during the first trimester of pregnancy leads to abortion and during the second trimester is more likely to result in prematurity [5]. C. burnetii infection in pregnant women increases the risk of maternal chronic Q fever endocarditis [6][7]. Q fever during a first pregnancy favours spontaneous abortions of future pregnancies [8], suggesting Q fever reactivation during latter pregnancies [5]. In women, a silenced immune response and the production of antibodies have been reported in response to infection [9].
In recent decades, outbreaks of Q fever have been observed around the world, including in the United Kingdom in 1989, France in 1998, Germany in 2005, and the Netherlands in 2007 [10]. Seroprevalence studies in pregnant women show highly variable rates in areas of endemicity: 0.15% in southeastern France, 3.8% in Canada, and 4.6% in the United Kingdom. In Denmark, a seroprevalence rate of up to 47% was reported in pregnant women who were occupationally exposed to livestock versus 4.8% in unexposed women [3]. More specifically, a seroprevalence of acute Q fever of 1.2% was found among women who experienced spontaneous abortion in the first semester of pregnancy in Denmark, with a significant proportion of asymptomatic patients [11]. In France, the seroprevalence in women who experienced spontaneous abortion was 0.27% [11][12].
C. burnetii infection is particularly deleterious in goats. C. burnetii infection is responsible for metritis, abortion, stillbirth and the delivery of weak offspring, which are the most frequent clinical signs of disease [13]. The placenta of goats is very rich in bacteria, and it is often through the aerosol route that farmers are contaminated. C. burnetii organisms are present in different organs such as the liver, spleen, lung [14][15][16], kidney, heart [14][15], and muscles [15] of goat foetuses and their mothers. However, to date, the vertical transmission of infection remains unclear. Bacteria are found in the stomach of the foetus, indicating that they contaminate amniotic liquid [16][17]. Alternatively, the inhalation of contaminated aerosols during parturition or lactation may be another source of contamination [18][19].

Several C. burnetii strains isolated from animals or humans including patients with acute or persistent focalised Q fever have been used for research [20]. However, the Nine Mile strain, isolated from the Dermacentor andersoni tick in Montana in 1938, is to date the strain mostly used in host–pathogen studies [21]. The lipopolysaccharide (LPS) structure, plasmid, and genotype have been commonly related to the different disease manifestations [20][22], cytopathic effects in cell cultures [20], and immune response [23][24][25][26]. The repeated cultures of C. burnetii Nile Mile strain result in a truncated LPS (O-antigen modification), which is associated with virulence decrease. This transition from phase I LPS to phase II LPS is related to a ≈26 Kb chromosomal deletion of C. burnetii genome [27]. Despite their frequent use in studies, phase II C. burnetii are not suitable for pathophysiopathological studies.
Generally speaking, placental C. burnetii isolates appear to be more virulent than other isolates. It has been proposed that the virulence found in the different strains could be due to the variation of LPS but also to the genomic content. Correlations have been found between C. burnetii genome variations or LPS chemotype and clinical presentations of Q fever [28][29]. The C. burnetii RSA493 strain genome was the first strain sequenced in 2003, which led to significant progress in understanding of C. burnetii pathogenicity [30]. The genome contains a 1,995,275 bp chromosome and a QpH1 plasmid with 37,393 bp. C. burnetii virulence appears to be correlated with the expression of certain plasmids. Four different plasmids have been identified among C. burnetii isolates, including QpH1 (Nine Mile strain), QpRS (Priscilla strain), QpDG (wild rodents), and QpDV [23]. C. burnetii Nine Mile strain presents the plasmid QpH1, MST16, and GGI [23]. It was reported that C. burnetti Nine Mile strain with QpH1 plasmid is the cause of severe C. burnetii infection in a guinea pig model [22][24]. Moreover, QpRS and QpDG plasmids have been associated with moderate infection and lack of virulence, respectively [22][24]. Three of the plasmids identified among C. burnetii isolates have been found in placental isolates from France and Spain (QpH1, QpRS, and QpDV) [23]. Obstetric complications are likely to be related to the QpDV plasmid [23][31]. Indeed, this plasmid has been found in three of six placentas and in placental bacterial strains from abortive women [23][32]. However, the presence of the QpDV plasmid has also been reported in a healthy woman, and other placental strains of C. burnetii harbour the QpH1 plasmid (Dutch strains) [23][33][34].
Despite the links between C. burnetii genome and virulence factors, there is an urgent need to develop genomic studies to better understand the pathogenicity of this bacterium during pregnancy.

3. The Placenta, a Target Tissue for C. burnetii

The placenta is a complex tissue formed by the chorion and the decidua, corresponding to the foetal and maternal tissues, respectively [33]. Due to its intrinsic structure and plasticity during pregnancy [34], the placenta is essential for foetal growth. Chorionic villus units are composed of mesenchymal cells, decidual macrophages (maternal macrophages), Hofbauer cells (foetal macrophages), foetal vascular cells, and trophoblast cells (Figure 1). The decidua is rich in immune cells, including NK cells, macrophages, T and B lymphocytes, DCs and mast cells, with an over-representation of NK cells and macrophages [35][36]. 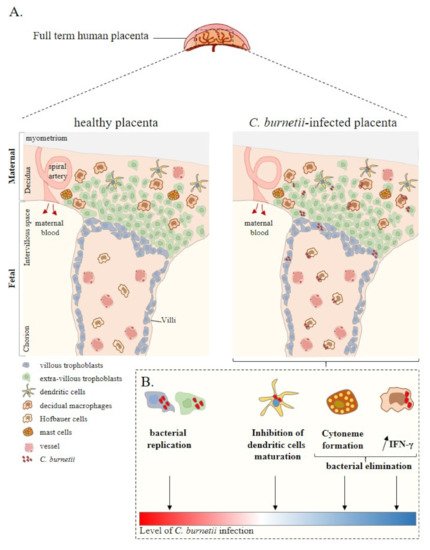 Figure 1. Placenta cell responses against C. burnetii infection. (A) Schematic representation of a full-term human placenta showing the maternal (decidua, myometrium) and foetal (intervillous space, chorion) parts. Placental cells are represented including extra-villous and villous trophoblasts and immune placental cells such as dendritic cells, macrophages (decidual and Hofbauer), and mast cells. During infection, C. burnetii was found in the placental tissue. (B) Ex vivo experiments based on in vitro infection of isolated primary cells from healthy at term human placentas reported the infectious capability of trophoblasts, dendritic cells, and macrophages by C. burnetii. In this context, although trophoblast infection leads to bacterial replication, the other cell lines present a specific anti-bacterial response promoting bacterial elimination. Thus, ex vivo experiments allow evaluating the level of C. burnetii infection at the placental level. Adapted from [37].
The examination of infected placentas from goats, cows, or mice using immunochemistry reveals the presence of C. burnetii organisms in this tissue (Table 1). A direct detection of C. burnetii using the polymerase chain reaction technique has confirmed the presence of bacteria in the placental tissue of goats, cows, ewes, calves, and mice [18][15][16][37][38][39]. The bacterium is found at the extracellular level, mainly in necrotic areas, or in placental cells through immunohistochemistry [38][39].
The anatomopathological examination of animal placentas reveals significant damage to the tissue (Table 1). Inflammatory response and some injury as a consequence are identified in C. burnetii-positive placenta from goats, ewes and cows [37][40][41]. Necrosis yellow/brownish exudates are found in C. burnetii-positive placentas from abortions and non-abortive pregnancies [14]. Necrotic lesions are observed in chorioallantoic membrane (cotyledonary and intercotyledonary), chorionic epithelium, chorionic villi, and ulcerated chorioallantoic membrane. Leucocyte infiltration is also detected within interplacentomal areas, chorionic and allantoic blood vessel walls at the base of the villi, and in allantochorionic stroma: leucocytes include neutrophils, lymphocytes, and occasional macrophages [14][15][39][40][42].
In women infected with C. burnetii, two main histological profiles are observed. In symptomatic pregnant women, the placental tissue shows necrosis, villitis, and perivillitis with abundant nuclear debris, necrosis intermixed with numerous disintegrating immune cells, neutrophils, and plasma cells in the decidua [43]. In asymptomatic pregnant women, no foci of necrosis or active inflammation are found in the placenta, but the placental tissue presents fibrotic chorion villi, loss of capillaries, stromal karyorrhexis and haemorrhages [40].

More
© Text is available under the terms and conditions of the Creative Commons Attribution (CC BY) license (http://creativecommons.org/licenses/by/4.0/)
Upload a video for this entry
Information
Subjects: Pathology
Contributor MDPI registered users' name will be linked to their SciProfiles pages. To register with us, please refer to https://encyclopedia.pub/register :
Soraya Mezouar
View Times: 54
Revisions: 2 times (View History)
Update Time: 01 Jul 2021
Table of Contents
1000/1000
Hot Most Recent