Gestational diabetes mellitus (GDM) represents a challenging pregnancy complication in which women present a state of glucose intolerance that is diagnosed for the first time during pregnancy. It has been estimated that 5 to 7% of pregnancies are complicated by diabetes, and almost 80% is GDM [1][2][3]. Diagnosis of GDM is achieved by the 75 g oral glucose tolerance test, although thresholds vary among different health and diabetes associations [4].

GDM has been associated with various obstetric complications, such as polyhydramnios, preterm delivery, shoulder dystocia, and increased rates of cesarean delivery [5]. Moreover, the fetus could suffer from congenital malformations, macrosomia, neonatal respiratory distress syndrome, hypoglycemia, and intrauterine death [5]. GDM presents a challenging diagnosis, and its management can be difficult. Ethnicity is a risk factor for the development of GDM, as the incidence of GDM is increased among Hispanic and African women [6]. Obesity, a family history of type 2 diabetes (T2D), and a prior history of GDM could also increase the risk of GDM.

There is increasing evidence that GDM presents a genetic component like T2D and aggregates within families [7]. Women with a diabetic sibling had an 8.4-fold increased risk of GDM [8]. In addition, specific gene variants of melatonin receptor 1B (MTNR1B), transcription factor 7-like 2 (TCF7L2), and insulin receptor substrate 1 (IRS-1) have been found to be associated with GDM [9][10]. It has been speculated that a high sugar intake and increased weight gain during pregnancy might be responsible for an inflammatory pathway that impacts on the onset of insulin resistance [11][12]. Findings from other studies correlated heme iron levels with GDM but not non-heme iron derived from plant-based foods such as grains, vegetables, and seeds [13][14][15].

The first line therapy for GDM is based on a lifestyle approach with a low glycemic diet and an increase in physical activity. If these measures are not effective in reaching the desired glycemic control, a drug approach with insulin can be started. In view of the above, the role of the diet is crucial during pregnancy. Additionally, other pregnancy-related diseases such as hypertension and fetal growth restriction could be affected by dietary patterns [16].

Several studies have been performed about the effects of different dietary patterns on GDM, but the findings are not conclusive [17][18]. A plant-based diet could represent a suitable option for preventing inflammation through a wide range of antioxidant-rich foods [19]. The literature suggests that a high intake of vegetables, fruits, grains, fish, and legumes, according to the Mediterranean diet (MedDiet), presents a low glycemic pattern and may lower the risk of GDM in a low-risk population [20][21][22].

The balance between oxidant and antioxidant molecules also represents a pivotal aspect of treating the inflammatory state in GDM [24]. Oxidative stress is characterized by a critical imbalance between antioxidant defenses and reactive oxygen species (ROS) [25]. Hyperglycemia could facilitate ROS production, thus creating an inflammatory state and increasing insulin resistance.

Vascular impairment is another mechanism involved in GDM related to oxidative stress [26]. Chronic exposure to ROS could lead to the increased production of mediators that drive stress-signaling pathways and cause potential tissue damage to key target organs, such as the vasculature and pancreas [26]. Tumor necrosis factor-α (TNF-α) has a pivotal role in insulin resistance as its concentrations are raised in GDM [27].

2. The Impact of a Plant-Based Diet on Gestational Diabetes

The term “plant-based” presents a wide definition as it could either partially include a limited amount of foods derived from animals or include only plant foods such as fruits, vegetables, and legumes [28].

A MedDiet is characterized by food derived from plants without a complete exclusion of animal-source foods. In contrast, both vegetarian and vegan diets exclude meat, chicken, and fish, and a vegan diet additionally excludes dairy and eggs.

A plant-based diet is rich in fibers, magnesium, potassium, and antioxidants but presents a lower intake of saturated fatty acids.

A plant-based diet can exert its role in the prevention of GDM via multiple mechanisms of action. Figure 1 summarizes some beneficial effects of this dietary pattern. 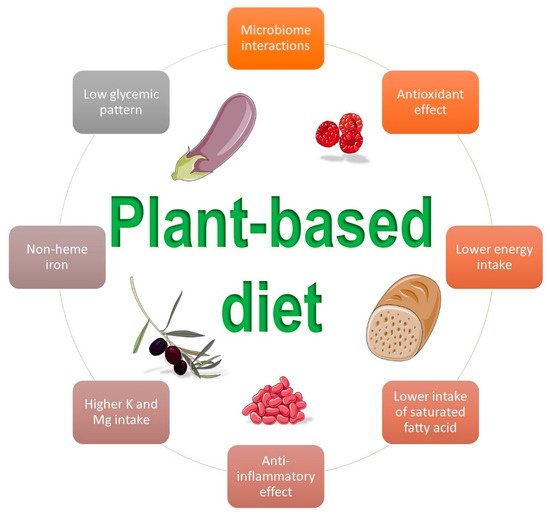 Most dietetic associations agree that a well-planned vegetarian diet presents an adequate amount of nutrients and is helpful for the prevention and treatment of several diseases [29][30]. Although plant-based diets are associated with an increased risk of nutritional deficiencies such as vitamin B12, the available evidence also supports a well-planned vegetarian or vegan diet as a safe option during pregnancy and lactation [31][32]. However, they require strong awareness and monitoring to achieve a balanced intake of all the key nutrients. In a retrospective study of 1419 women, Kesary et al. found that a maternal vegan diet might act as a protective factor from maternal weight gain but that it also increases the occurrence of lower birth weight in the neonate [19]. In a different study, a calorie-restricted vegetarian diet was found to increase insulin sensitivity compared to a conventional diabetic diet over 24 weeks of gestation [33]. Moreover, physical activity along with a low calorie diet had a positive effect on oxidative stress marker levels. A vegetarian diet was also reported to reduce intramyocellular lipid concentrations and visceral fat, favorably impacting on insulin sensitivity and enzymatic oxidative stress markers [33].

The MedDiet and its role in the prevention of GDM has also been the subject of several investigations. A prospective study by García de la Torre et al. analyzed 1066 normoglycemic women before 12 gestational weeks following a MedDiet with extra-virgin olive oil (EVOO) and pistachio supplementation and found that GDM incidence and maternal–fetal outcomes were lower than in the control group [35]. In a different prospective study including 1076 pregnant women adhering to a MedDiet pattern, better glucose tolerance and a decreased incidence of GDM was highlighted [36].

A case-control study of 299 pregnant women affected by GDM found that a high adherence to the MedDiet before pregnancy was strongly associated with a decreased risk in GDM, suggesting a dose-dependent fashion [37].

Mak et al. performed a prospective cohort study of 1337 Chinese pregnant women and did not find a significant association between the risk of GDM and early pregnancy dietary patterns. However, the authors found that a high protein–low starch diet decreased the risk for GDM among obese women [38].

In a different study, the Dietary Approach to Stop Hypertension (DASH) was found to be effective to prevent GDM in 200 pregnant women [39]. The DASH, which was created to lower blood pressure, emphasizes a lower sodium intake and prefers foods rich in potassium, magnesium, and calcium [39].

Jali et al. analyzed 325 pregnant women undergoing screening for GDM and found out that 52 (16%) presented GDM. Particularly, authors have revealed an increased prevalence of GDM in patients following a non-vegetarian diet compared to a vegetarian diet (65.5% vs. 38.5%) [40].

Another Indian study analyzed 5100 pregnant women and revealed that non-vegetarianism was associated with an increased risk of developing GDM [41].

According to the available evidence, several possible mechanisms could explain the beneficial effects of a plant-based diet on GDM: the presence of fibers and vegetable proteins, a higher intake of antioxidants, a lower intake of saturated fat, and a higher intake of non-heme iron [42][43].

Table 1 summarizes the available studies and the main findings concerning the link between a plant-based diet and GDM.

Table 1. Main findings of the studies concerning the impact of a plant-based diet on gestational diabetes mellitus.

Anonymous
10 Apr 15:59:53
0
Your work is very interesting, I feel very happy after watching it, thank you