The DOF (DNA BINDING WITH ONE FINGER) family of plant-specific TF (transcription factors) was first identified in maize in 1995. Since then, DOF proteins have been shown to be present in the whole plant kingdom, including the unicellular alga Chlamydomonas reinhardtii. The DOF TF family is characterised by a highly conserved DNA binding domain (DOF domain), consisting of a CX2C-X21-CX2C motif, which is able to form a zinc finger structure. Early in the study of DOF proteins, their relevance for seed biology became clear. Indeed, the PBF (PROLAMIN BINDING FACTOR), one of the first DOF proteins characterised, controls the endosperm-specific expression of the zein genes in maize. Subsequently, several DOF proteins from both monocots and dicots have been shown to be primarily involved in seed development, dormancy and germination, as well as in seedling development and other light-mediated processes. In the last two decades, the molecular network underlying these processes have been outlined, and the main molecular players and their interactions have been identified. In this review, we will focus on the DOF TFs involved in these molecular networks, and on their interaction with other proteins.

The first DOF (DNA BINDING WITH ONE FINGER) proteins were isolated because of their interaction with viral or bacterial sequences[1][2][3]. Indeed, the maize DOF1/MNB1a was originally identified as a protein binding to the cauliflower mosaic virus 35S (CaMV35S) promoter[4]; similarly, the Arabidopsis OBP1 (ocs Binding Factor/OBF BINDING PROTEIN 1) was shown to bind an element upstream of the ocs domain present in the CaMV35S promoter[2]. The tobacco NtBBF1 (Nicotiana tabacum rolB domainB Factor1) DOF protein was identified as the plant transcription factor binding to the promoter of the plant oncogene rolB[3], where it recognises a specific sequence in the region required for rolB expression in root meristematic cells and for induction by auxin[5][6]. All DOF proteins bind the highly conserved (T/A) AAAG consensus motif, identified through binding site-selection experiments using the maize DOF proteins DOF1, DOF2, DOF3 and PBF (PROLAMIN BINDING FACTOR)[7]. Although these first DOF proteins have been linked to viral and bacterial activity, subsequent studies highlighted their fundamental role in plant-specific processes (for a review, see Reference [8][9]).In Arabidopsis, seed development is divided in two phases: embryo/endosperm development and seed maturation[10]. Once the embryo is formed and cell division arrests, the seed enters the maturation phase characterised by an increase of the levels of ABA (abscisic acid) required for the establishment and maintenance of dormancy upon completion of maturation. Germination occurs when seeds are in optimal environmental conditions, mainly as far as water availability, light and temperature [11][12], and dormancy is released—under experimental conditions, dormancy can be released by a period of storage and a cold treatment at 4 ◦C for two days (stratification). The positive effect of light on seed germination is mediated mainly by the Red-light photoreceptor phytochrome B (phyB)[13], which controls the balance between ABA, which promotes dormancy, and GA (gibberellic acid), which stimulates germination by counteracting the effect of ABA[14][15][16]. Once germination is completed, seedling development undergoes photo- or skoto-morphogenesis, depending on the presence or absence of light, respectively[17].

Expression of prolamin genes is tightly controlled. The main cis-element present in their promoters is an endosperm-specific box[18][19], which consists of two motifs: a GLM (GCN4-like motif) (5′ G(A)TGA(G) GTCAT 3′) that shares homology with yeast GCN4[20], and a 7 bp P-box (Prolamin box) (5′TGTAAAG3′)[21][22][23]. The endosperm nuclear factors binding the P-box on the promoters of barley prolamin genes were among the first DNA binding factors identified in plants[24][25][26][27]. The corresponding PBF (PROLAMIN BINDING FACTOR) gene was first isolated from maize and shown to encode a DOF protein that interacts with O2 (Opaque2)[28]. The barley, wheat and rice homologues of maize PBF—BPBF, WPBF and RPBF respectively—were also shown to control the expression of prolamin genes[29][30]. BPBF has also been shown to interact with GAMYB, a barley transcription factor belonging to the R2R3 MYB family[31], and to cooperatively induce expression of the Hor2 (Hordein2) prolamin gene[31]. Interestingly, besides BPBF, the barley DOF protein, SAD (SCUTELLUM and ALEURONE-expressed DOF), bind the Hor2 promoter and interact in vivo with GAMYB[32]. At the onset of seed germination, stored compounds, mainly proteins and starch, are hydrolysed by proteases and hydrolytic enzymes secreted from aleurone cells[33][34]. GAs induce the expression of these proteases- and hydrolases-encoding genes; the promoters of these genes are characterised by a DOF binding site[35][36]. GAs also induce GAMYB transcription; GAMYB induces expression of hydrolase genes. Interestingly, SAD interact with GAMYB and cooperates in the positive control of hydrolase genes expression. Also BPBF is involved in the transcriptional control of these genes, but with an antagonistic function with respect to SAD[37]. Indeed, in regulating the expression of hydrolase genes in aleurone cells, BPBF functions as a repressor, whereas SAD functions as a transcriptional activator, although both interact with GAMYB[37][38].

DELLA proteins are repressors of GA signaling and of GA-mediated processes, such as seed germination. As for the seed germination process, it was shown that the DELLA protein primarily involved in this process is RGL2 (RGA-LIKE2)[39][40][41]. Studies on the RGL2 target gene GATA12, encoding a GATA zinc finger transcription factor repressor of GA-mediated seed germination, led to the identification of the RGL2-DOF6 (At3g45610; DOF3.2/DOF6) complex responsible for GATA12 induction in freshly harvested seeds. ChIP (Chromatin Immunoprecipitation) assays proved that both RGL2 and DOF6 are required to induce GATA12 expression[42] (Figure 1). Another DOF protein, which represses seed germination through direct interaction with a DELLA protein, is DAG1 (DOF AFFECTING GERMINATION 1), which was convincingly demonstrated to be involved in seed germination[43]. DAG1 cooperates with GAI (GIBBERELLIC ACID INTENSITIVE) to negatively regulate GA3ox1. Indeed, GAI is necessary for the binding of DAG1 to the DOF sites in the GA3ox1 promoter, and it directly interacts with DAG1[44](Figure 1).

4. DOF Proteins in Seedling Development and Other Light-Mediated Processes

COG1 (COGWHEEL 1) is the first DOF protein which was shown to be involved in both phyA- and phyB-mediated seedling development. It has been shown that COG1 promotes hypocotyl elongation, through PIF4 and PIF5 (PHYTOCHROME INTERACTING FACTOR4 and 5 ), which in turn induce BRs (Brassinosteroids) biosynthesis. CDF5 (CYCLING DOF FACTOR 5) belongs to a sub-family of DOF proteins homologous to CDF1, which negatively controls expression of the floral activator-encoding gene CO (CONSTANS)[45]. Interestingly, CDF and COG1 belong to the same DOF phylogenetic clade, previously referred to as group II[46]. It was recently shown that CDF5 promotes cell expansion and hypocotyl elongation in a light- and clock-dependent manner[47]. CDF5 acts downstream of both the PIFs and the PRR9/7/5 (PSEUDO-RESPONSE REGULATORS 9/7/5) antagonistic pathway, which promote and, respectively, inhibit hypocotyl growth. Both PIFs and PRRs target CDF5: PIFs induce pre-dawn expression of CDF5 to promote hypocotyl growth, whereas PRRs directly repress CDF5 from morning to dusk to prevent overgrowth of the hypocotyl[47](Figure 2). Similarly, DAG1 has been recently shown to promote cell expansion and hypocotyl elongation[48]: light-grown dag1 mutant seedlings have hypocotyls significantly shorter than the wild-type, suggesting that DAG1 is a negative regulator in the light-mediated inhibition of hypocotyl elongation[49]. Indeed, DAG1 promotes hypocotyl elongation through the control of ABA, ethylene and auxin signaling; Gene Ontology analysis of the 257 DE genes in dag1 hypocotyls compared to the wild-type, revealed that “response to abscisic acid”, “ethylene biosynthetic process” as well as “response to ethylene” and “response to auxin” were among the most significantly enriched categories[48]. 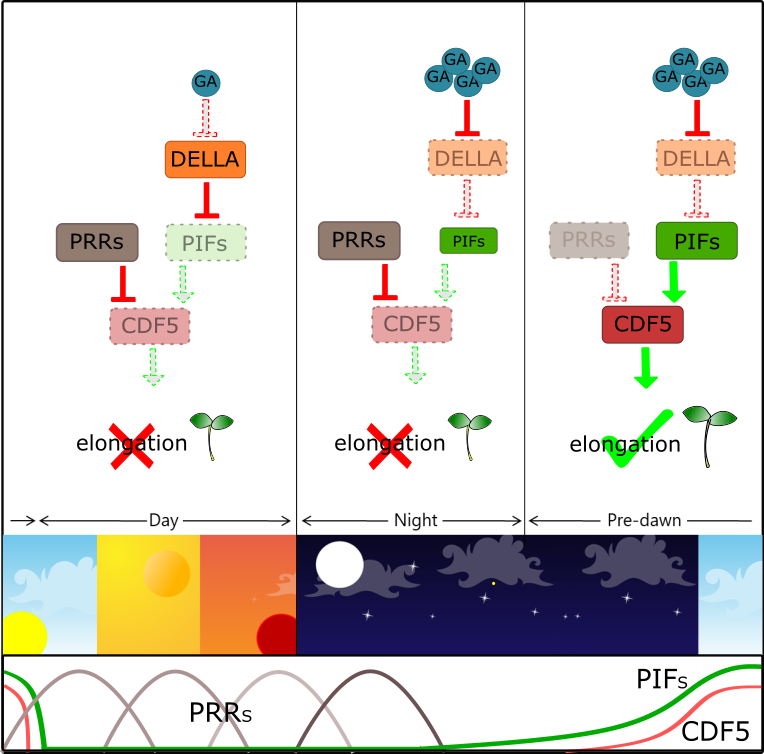 Arabidopsis DOF genes are mainly expressed in the vascular system, in the xylem, in the phloem or both (for a review, see Reference [50]). Recently, two Arabidopsis DOF proteins (DOF2.4 and DOF5.1) have been identified as mobile factors involved in root procambial development and were named PEAR1 and 2 (PHLOEM EARLY DOF1 and 2). The corresponding PEAR1 and 2 genes are highly expressed in PSE (protophloem sieve elements)[51]. PEAR1 and 2 were shown to trigger periclinal cell division by controlling genes that promote radial growth, such as SMXL3 (SUPPRESSOR OF MAX2 1-LIKE3), encoding a key regulator of phloem formation. In addition, four homologues (DOF3.2, DOF5.3, DOF1.1 and DOF5.6, have been identified as PSE-specifically or PSE-abundantly expressed DOF genes with a broader protein localisation. These DOF factors redundantly function in the promotion of periclinal cell divisions in PSE cells[51]. The action of PEAR factors is counteracted by the HD-ZIP III transcription factors PHB, CNA and REV (PHABULOSA, CORONA and REVOLUTA). In addition, this molecular network involves a double-negative feedback loop where PEAR1 induces transcription of the PHB, CNA, and REV genes and the corresponding PHB, CNA and REV proteins negatively control PEAR1 transcription and protein movement[51].