Cytokinins (CKs) are key phytohormones that not only regulate plant growth and development but also mediate plant tolerance to drought stress. Recent advances in genome-wide association studies coupled with in planta characterization have opened new avenues to investigate the drought-responsive expression of CK metabolic and signaling genes, as well as their functions in plant adaptation to drought. Under water deficit, CK signaling has evolved as an inter-cellular communication network which is essential to crosstalk with other types of phytohormones and their regulating pathways in mediating plant stress response. In this review, we revise the current understanding of CK involvement in drought stress tolerance. Particularly, a genetic framework for CK signaling and CK crosstalk with abscisic acid (ABA) in the precise monitoring of drought responses is proposed. In addition, the potential of endogenous CK alteration in crops towards developing drought-tolerant crops is also discussed.

During their life cycle, plants are constantly exposed to a changing environment, often including various adverse biotic and/or abiotic factors [1][2][3]. Such stress conditions may prevent plants from fulfilling their maximum potential performance, even threatening their survival. Environmental disturbance caused by human activities, especially in recent decades, has exacerbated the frequency of abiotic stresses, thus increasing the difficulties in securing adequate food supply [4]. Amongst these, drought and salinity are often considered as the most serious factors limiting crop production [5]. Particularly, drought adversely affects numerous biological activities, such as photosynthesis, nutrient acquisition and cellular metabolism [6], as a result of the decrease in chlorophyll concentration, cell membrane stability, leaf water content and the increase in oxidation-induced damage [7][8]. It has been known that plants respond to drought in order to alleviate the stress effects on their growth and productivity [9]. These responsive activities are related to morphological, physiological, biochemical and molecular changes in plants, which are outcomes of the capacity of the plant to perceive and transduce the stress signal to regulate their gene expression [6][10][11][12].

2. A Portrait of CKs in Plant Development and Stress Adaptation

Cytokinins (CKs) are a class of the multifaceted plant hormone that plays essential roles in a wide array of processes of plant growth and development [13]. Since the discovery of their existence in maize (Zea mays) seeds over 50 years ago, CKs have been extensively studied for their chemical nature, metabolism and signal transduction pathway, as well as their functions in plant growth and development (Figure 1). Significant regulatory functions of CKs at the tissue and organ levels include the inhibition of lateral root initiation [14], differentiation of phloem and metaxylem in roots [15], regulation of cell division, photomorphogenic cell differentiation in expanding leaves and shoots [16][17], and inhibition of leaf senescence [18]. 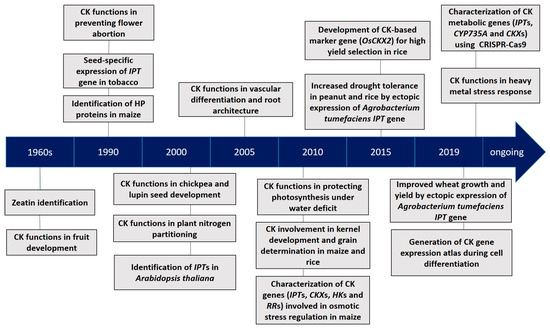 Endogenous CKs are adenine derivatives with isoprenoid or aromatic side chains. Depending on hydroxylation or reduction of the side chain, isoprenoid CKs, which are widespread in nature, can be distinguished as isopentenyladenine (iP)-, trans-zeatin (tZ)-, cis-zeatin (cZ)- or dihydrozeatin (DHZ)-type derivatives. By contrast, aromatic CKs, such as N6-(meta-hydroxybenzyl)adenine (BA), are found in plants at a lower abundance [42]. The isoprenoid CKs differ in their biological functions, biochemical properties, metabolic conversions, and their transportability across the plant body [13]. Various enzymes involved in CK metabolism, including CK biosynthesis, inter-conversion between CK types and CK degradation, are responsible for maintaining CK homeostasis [43]. CK metabolism has been extensively explored to understand the function of a large number of genes and enzymes, as well as the composed metabolic network regulated by CKs throughout the plant kingdom (reviewed by Pavlů et al. [13]; Zwack et al. [18]). CK signaling pathway is also triggered by various environmental stimuli, such as changes in temperature, nutrition levels and osmotic conditions, whereby the phospho-relay cascades of the two-component system (TCS) (i.e., downstream components of CK signaling, which will be discussed in detail in Section 2.2), are initiated and lead to the expression regulation of specific genes involved in plant adaptation [13][43]. More recently, CK crosstalk with ethylene (ET), jasmonates (JAs), salicylic acid (SA) and abscisic acid (ABA) have been recognized [17][43][44][45], indicating a coordinating network among these phytohormones in plant stress tolerance. Furthermore, CK biosynthesis and signaling components are known to act as constitutive signals defining plant response to drought stress and regulating plant drought acclimation [13]. Their rapid responses, spatiotemporal expression, as well as their widely associated pathways, make CKs excellent candidates to regulate complex morphogenetic processes under water deficit. Therefore, in this review, we will emphasize and propose a model for the role and regulation of plant CKs under drought stress.