A novel oxazolidinone with cyclic amidrazone, delpazolid (LCB01-0371), was synthesized by LegoChem BioSciences, Inc. (Daejeon, Korea). Delpazolid can improve the minimum bactericidal concentration of Mycobacterium tuberculosis H37Rv and signiﬁcantly reduce resistance rates,especially of multi-drug-resistant tuberculosis (MDR-TB) isolates, compared with linezolid. Therefore, delpazolid can be used to treat MDR-TB. The safety, tolerability, and pharmacokinetics of delpazolid have been evaluated in a phase 1 clinical trial, which revealed that it does not cause adverse events such as myelosuppression even after three weeks of repeated dosing.

Oxazolidinone is a heterocyclic organic compound containing both nitrogen and oxygen in a 5-membered ring and is mainly used as an antimicrobial agent. This class of antimicrobials is active against a large spectrum of Gram-positive bacteria, including methicillin-resistant Staphylococcus aureus (MRSA), vancomycin-resistant enterococci (VRE), vancomycin-intermediate strains, and penicillin-resistant pneumococci, and acts via inhibiting protein synthesis.

Linezolid is the first oxazolidinone antimicrobial to be developed; it exhibits a high degree of in vitro activity against various Gram-positive pathogens [1]. Linezolid exhibits bactericidal activity against Mycobacterium tuberculosis and has been used to treat rifampicin-resistant tuberculosis (RR-TB) or multi-drug-resistant tuberculosis (MDR-TB) [2]. Although the integration of linezolid into RR-TB or MDR-TB treatment can improve outcomes, prolonged administration is often limited by long-term side effects, including reversible myelosuppression, potentially irreversible optic neuropathy, and peripheral neuropathy [3]. Therefore, safety and tolerability are critical issues to consider when prescribing these antibiotics [4]. Less toxic alternatives are under development for diseases that require long-term therapy such as tuberculosis.

LegoChem Biosciences (Daejeon, Korea) is a company that develops effective and safe drugs using legochemistry technology, which enables the manipulation of substances by attaching and detaching compounds around scaffold-like Lego blocks. LegoChem Biosciences searches for novel candidate substances based on the concept that a good scaffold with novel blocks, based on medicinal chemistry, can accelerate the process of improving previous scaffolds with weak activity or have side effects. Delpazolid (code No: LCB01-0371), a derivative of oxazolidinone, is the first candidate antibiotic substance identified by LegoChem Biosciences.

Delpazolid is an antibiotic that targets Gram-positive bacteria (MRSA, VRE) including M. tuberculosis. It is currently undergoing a phase 2 clinical trial for oral (PO) administration and a phase 1 trial for intravenous (IV) administration to treat Gram-positive (MRSA, VRE) bacteraemia. Cyclic amidrazone blocks were applied to the key scaffold of delpazolid (Figure 1). In general, after a drug is absorbed, it must be dissolved well to ensure proper secretion. Most small molecules with suboptimal pharmacokinetic (PK) profiles tend to have low solubility. In general, small-molecule ligands that bind their targets with high efficiency are more hydrophobic, and hydrophobic interactions are essential for increased ligand efficiency [5]. Hydrophobicity not only increases target binding efficacy, but also decreases the solubility of a small molecule. The cyclic amidrazone (Figure 1) on the side chain of delpazolid maintains its hydrophobicity to some extent and has a slightly basic pH similar to that of carboxylate. Therefore, it can be charged by obtaining a proton from carboxylic acid under human physiological conditions, which enhances the solubility and PK profile. Therefore, the drug is accumulated slowly and excreted well, and can be administered over the long-term with minimal side effects. 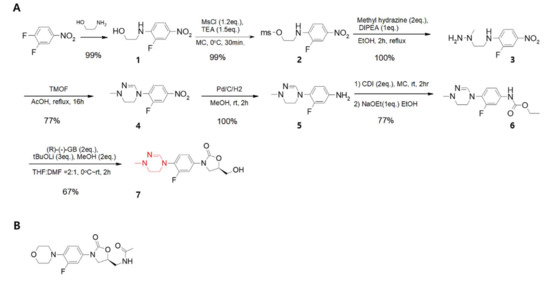 Figure 1. (A). Synthetic scheme showing that delpazolid can be synthesised in only seven steps with difluoro-nitrobenzene as the starting material. Each step shows a high yield and the products are easily purified without chromatography. The red color indicates cyclic amidrazone. (B). Chemical structure of linezolid.

3. Safety Evaluation in the Phase 1 Clinical Trial as PO

The greatest advantage associated with delpazolid is its safety. In phase 1a of a phase 1 clinical trial to evaluate its safety, as illustrated in Table 1, 64 subjects were divided into eight groups, six of whom were administered delpazolid and two who were administered the placebo. The study was the first double-blind, randomized human trial of delpazolid. To deliver single-ascending-doses (SADs), delpazolid was administered in a step-wise manner from 50 mg up to 3200 mg. Only mild adverse events were observed up to 2400 mg. At a delpazolid dose of 3200 mg, gastrointestinal (GI) tract-related adverse events were noted. In the 3200 mg dose group, volunteers had to ingest 16 tablets of 200 mg delpazolid tablets at once, resulting in GI tract-related adverse events. Therefore, the maximum tolerated dose of delpazolid was determined to be 2400 mg per day.

Table 1. Summary of phase 1a/b and 2a dose-escalation study to assess the safety, tolerability, and pharmacokinetics of delpazolid as a single agent.

A phase 1b study was conducted based on multiple-ascending-doses (MADs) over seven days. Thirty-two subjects were divided into eight groups, six of whom were administered delpazolid and two of whom were administered the placebo. Subjects were given delpazolid in MADs from 400 mg BID (bis in die, twice a day) up to 1600 mg BID over seven days. Doses up to 1200 mg BID for seven days were well-tolerated with no specific adverse events observed. After the 7-day MAD study, a 21-day MAD study was conducted to evaluate bone marrow toxicity, which is one of the most critical side effects of linezolid [7]. Subjects administered 800 mg once a day (QD) to 1200 mg BID delpazolid were monitored for up to three weeks to more accurately assess adverse events such as myelosuppression, as signs such as decreased platelet count may be observed even after two weeks. As illustrated in Table 1, serious adverse events were not observed under the MAD-21-day condition. In summary, no myelosuppression-related adverse events or serious adverse events were observed in phase 1a with SADs up to 2400 mg and in phase 1b with MAD up to 1200 mg BID (2400 mg per day) for 21 days. Therefore, delpazolid does not appear to exhibit adverse events associated with repeated dosing. In addition, delpazolid did not cause CYP-mediated metabolism and cardiac repolarisation issues [4][6][8][9].

As shown in Table 2, delpazolid showed a greater inhibitory effect than linezolid towards Escherichia coli at a 5-fold lower concentration (0.8 μg/mL).