Platelets are small, anucleate blood cells produced by megakaryocytes. The main function of platelets is to participate in the physiological process of haemostasis, allowing bleeding to stop at the site of an injury, while maintaining normal blood flow elsewhere in the circulation. Platelets are also involved in immunity, antimicrobial defense, cancer growth and metastasis, lymphangiogenesis, inflammatory diseases, wound healing, liver regeneration and neurodegeneration. Their life span is 7–10 days in human. They are produced by megakaryocytes (MKs), mostly in the bone marrow.

1. The Function of Platelets

The main function of platelets is to participate in the physiological process of haemostasis, allowing bleeding to stop at the site of an injury, while maintaining normal blood flow elsewhere in the circulation. The inner surface of blood vessels is covered by endothelial cells that act as anticoagulant.

Platelets also have other roles than participating in haemostasis. They have been shown to be involved in immunity, antimicrobial defense, cancer growth and metastasis, tumour angiogenesis, lymphangiogenesis, inflammatory diseases, wound healing, liver regeneration and neurodegeneration .

2. Regulation of Platelet Life Span by Apoptosis: Role of Bcl-xL

Intrinsic apoptosis is tightly controlled by the Bcl-2 family of proteins, functionally divided into pro- and antiapoptotic proteins. Bak and Bax are the proapoptotic molecules that dictate cell fate. Activation of Bak and Bax will cause irreversible damage to the mitochondrial outer membrane with subsequent cytochrome c release, apoptosome assembly and caspase activation. In healthy cells, the antiapoptotic members Bcl-xL, Bcl-2, Mcl-1, Bcl-w, A1 and Bcl-b restrain Bak and Bax. In response to cellular stress, a third group of Bcl-2 proteins, the BH3-only initiator proteins (Bim, Puma, Bad, Noxa, Bik, Hrk and Bmf), can inhibit the prosurvival proteins and indirectly as well as directly contribute to the activation of Bak and Bax. The balance between pro- and antiapoptotic members of the intrinsic apoptosis pathway varies depending on cell type.

In adults, Bcl-xL plays an essential survival function in platelets. Platelets are a unique model in terms of life span regulation because they mostly depend on only 2 antagonistic Bcl-2 family members, ie Bcl-xL for their survival and Bak for their death, when in circulation at steady-state. However, in response to apoptotic triggers such as pharmacological or genetic deletion of Bcl-xL, not only Bak but both Bak and Bax regulate platelet lifespa.

3. Diseases of Platelet Numbers in Humans

Most thrombocytosis (over than 90%) are reactive and secondary to infection or inflammatory diseases (autoimmune, cancer and tissue injury) as inflammatory cytokines increase platelet production directly or indirectly by increasing TPO synthesis (Table 1). Iron deficiency can also lead to moderate thrombocytosis, or even thrombocytopenia when the iron deficiency is severe. The precise mechanism is unknown although it has been suggested that iron deficiency induces a bias towards MK commitment of a bipotent erythroid/MK progenitor. Another setting associated with reactive thrombocytosis is when the spleen has been removed (splenectomy) or is not functional (asplenism).

Table 1. Causes of thrombocytosis in human.

Thrombocytopenias are frequent, but in most cases they are not isolated but rather associate with acute or complex pathologies. They are related either to a defect in platelet production, increased platelet destruction or consumption, abnormal pooling or eventually to mixed mechanisms (Table 2).

Table 2. Causes of thrombocytopenia in human. 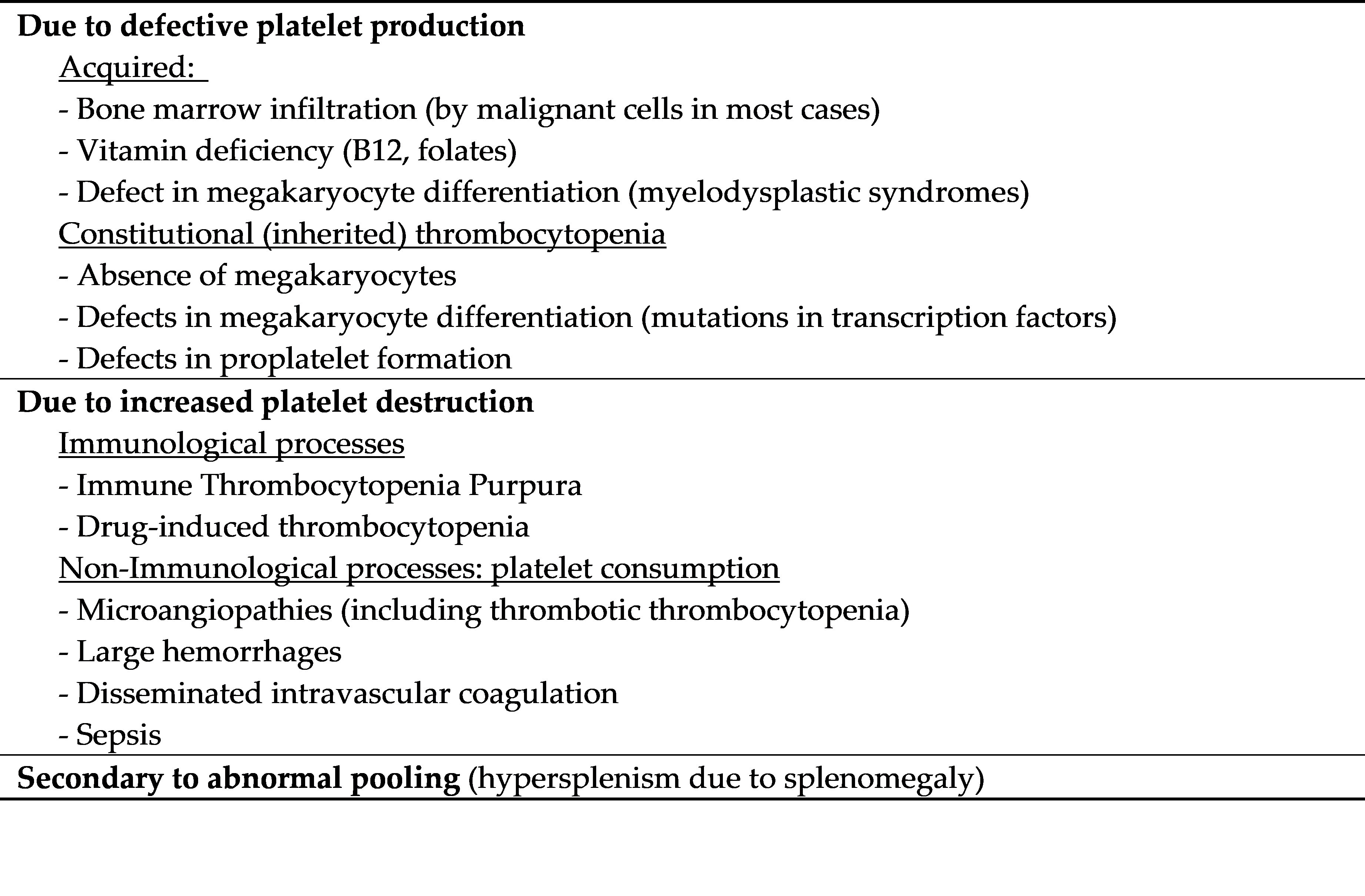