Osteoarthritis (OA) is the most common joint disease that causes pain and disability in the adult population. OA is primarily caused by trauma induced by an external force or by age-related cartilage damage. Chondrocyte hypertrophy or chondrocyte senescence is thought to play a role in the initiation and progression of OA. Although chondrocyte hypertrophy and cell death are both crucial steps during the natural process of endochondral bone formation, the abnormal activation of these two processes after injury or during aging seems to accelerate the progression of OA. However, the exact mechanisms of OA progression and these two processes remain poorly understood. Chondrocyte senescence and hypertrophy during OA share various markers and processes. In this study, we reviewed the changes that occur during chondrocyte hypertrophy or senescence in OA and the attempts that were made to regulate them. Regulation of hypertrophic or senescent chondrocytes might be a potential therapeutic target to slow down or stop OA progression; thus, a better understanding of the processes is required for management.

Chondrocyte hypertrophy and cell death are natural phenomena that usually occur during a developmental process called EO. Hypertrophic chondrocytes appear and play a crucial role in EO. Hyaline cartilage can be divided into two groups: 1) temporary and 2) permanent cartilage. Healthy cartilage is usually called permanent cartilage or resting chondrocytes, which are present in the articulating joint. Usually, permanent cartilage has a low proliferation rate and does not undergo terminal differentiation and EO under normal conditions[1]. Temporary cartilage is initially formed as cartilage, but the final product is bone. Unrestricted differentiation of precursor cells into the chondrocyte lineage does not lead to permanent cartilage, but bone[1]. Chondrocytes undergo active proliferation and generate a cascade of cells, whereas some of them undergo enlargement, and others hypertrophical changes and become hypertrophic chondrocytes. These cells increase their volume dramatically, and the surroundings become mineralized to develop bone tissue[2]. The elastic nature of cartilage begins to change and harden through calcification. This makes it more difficult for the chondrocytes to receive nutrients, as most of the cells undergo apoptosis and leave small cavities within the tissue, which leaves enough room in the hardened bone for blood vessel invasion. Through this process, the cartilage turns into trabecular bone. However, the major highlight events of EO, such as chondrocyte proliferation, hypertrophic differentiation of chondrocytes, cell death, calcification or mineralization, blood vessel invasion, and chondrocyte apoptosis, equivalently occur in OA (Figure 1).

Cell hypertrophy generally refers to an increase in cell size and volume. Hypertrophic differentiation of chondrocytes can also be characterized by the high expression of collagen type X, runt-related transcription factor 2 (RUNX2) and MMP13. Hyaline cartilage markers, such as aggrecan, collagen type II, and SOX9, are decreased in the hypertrophic cells. Although hypertrophical changes in chondrocytes are required in bone growth and development, the mechanism acts as a double-edged sword in diseased environments[3].

Hypertrophic differentiation is also an important pathological change in OA cartilage[4]. Cartilage tissue fractures at sites that receive high mechanical stress, which is a process called fibrillation[5]. During fibrillation in the cartilage, the tissue loses several ECM proteins, including proteoglycans and collagen fibers. After these changes, the subchondral bone generates osteophytes. Abnormal chondrocyte hypertrophy in articular cartilage is seen in cartilage destruction, which is a potential therapeutic target for OA treatment[6][7]. Hypertrophic chondrocytes start to express genes related to osteogenic differentiation, and start to produce mineralized ECM proteins[8][9]. It is unclear if the abnormally differentiated hypertrophic chondrocytes give rise to fully differentiated bone cells, however, apoptosis of hypertrophic chondrocytes were suggested in previous studies. Lacunar emptying within OA cartilage was observed, which leaded to the loss of the articular cartilage[10][11]. After these changes, the subchondral bone generates osteophytes. Chondrocyte calcification by calcium deposition is the final stage of chondrocyte hypertrophy[1]. Previous studies reported that the layer bordering the calcified cartilage and the non-calcified cartilage increases after the age of 60 years[12]. Although this layer of calcified cartilage tends to increase throughout the aging process, in some cases, the calcified region decreases instead. This indicated that the lower calcified cartilage was replaced by bone due to the EO-like process in OA.

Elevated levels of MMP13 have been reported in OA cartilage[23][24]. The gene level of MMP13 was highly expressed in OA cartilage when compared to normal levels. Elevated expression of MMP13 and collagen type X was reported after inducing knee joint stability by the transection of knee ligaments and meniscus removal in mouse OA models[25]. MMP13 is also thought to play a central role in the irreversible degradation of collagen type II in OA[26][27]. Knockdown of activin-like kinase 5 (ALK5) was reported to increase MMP13 mRNA levels[28]. TGFβ is important for the maintenance and protection of healthy articular cartilage; therefore, it is commonly used in the in vitro culture of chondrocytes or chondrogenesis. The binding of TGFβ to its receptor recruits the type I receptor ALK5. In turn, this molecule complex phosphorylates the smad2 and 3 in the smad2/3 pathway, which is known to repress chondrocyte terminal differentiation[29][30]. Another alternative receptor ALK1 activates the smad1/5/8 signaling pathway, which is known to induce chondrocyte terminal differentiation[31][32]. The change in the ALK1/ALK5 ratio during aging or OA development may result in increased dominance of the smad1/5/8 signaling in chondrocytes and induce a hypertrophic-like state by high levels of MMP13. MMP13 is also a central regulator of chondrocyte senescence[33]. Chondrocytes undergoing senescence produce ECM-degrading enzymes such as MMP13, which promotes the degradation of the main protein of the articular cartilage, aggrecan, and collagen type II. MMP13 produced by cultured chondrocytes isolated from older donors appeared to be increased[34]. Changes in chondrocyte function (e.g., decreased anabolic activity and increased catabolic activity) are thought to be related to MMP13 production. 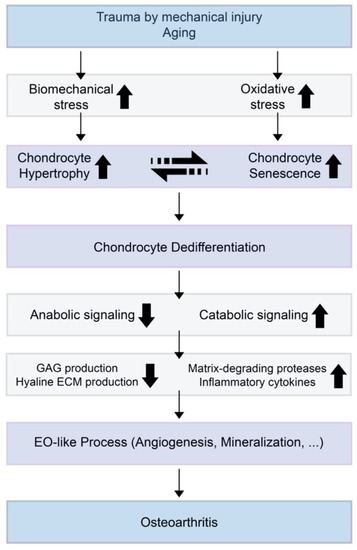 Figure 1. A theoretical model for the relationships of chondrocyte hypertrophy and chondrocyte senescence and the initiation or progression of osteoarthritis (OA). When trauma is induced by mechanical injury or aging, biomechanical stress and oxidative stress increase in the cartilage environment. Increased chondrocyte hypertrophy and senescence induce decreased anabolic signaling and increased catabolic signaling. This results in suppressed glycosaminoglycan (GAG) production by normal chondrocytes and increases the expression of extracellular matrix (ECM)-degrading enzymes and inflammatory cytokines.

RUNX2 is the main transcription factor that is involved in hypertrophic chondrocyte differentiation and early osteogenesis[24][35]. One of the hallmarks of OA is the upregulation of RUNX2. Therefore, RUNX2 is assumed to be a major transcriptional factor that directly regulates the expression of matrix degradation enzymes in the damaged articular cartilage[36]. When the destabilization of the medial meniscus (DMM) osteoarthritis model was induced in RUNX2 knockout mice, the gene expression of matrix degradation enzymes (i.e., MMP9, MMP13, ADAMTS4, ADAMTS5, ADAMTS7, and ADAMTS12) was significantly reduced compared with DMM-induced Cre-negative control. The deletion of RUNX2 in DMM-induced mice decreased MMP13 protein levels in the articular cartilage. Cells expressing ectopic RUNX2 showed a senescent-like phenotype that was characterized by an enlarged and flattened morphology and β-galactosidase staining; p53 signaling was required for this process[37].

A characteristic feature of hypertrophy and OA cartilage is the increased production of VEGF. VEGF induces the migration of endothelial cells by chemotactic actions and induces angiogenesis in vivo. VEGF also promotes angiogenesis in the cartilage tissue, which is related to the calcification of chondrocytes that can lead to dysregulated osteogenesis of the normal cartilage. Neoangiogenesis in the cartilage growth plate plays an important role in EO; therefore, VEGF is thought of as a critical mediator during EO. Carlevaro et al. investigated the expression of VEGF in mammalian and avian embryo long bone growth plates[38]. Although VEGF was observed in fully mature hypertrophic chondrocytes, it was completely absent in proliferating and quiescent cells in both chicken and mice. VEGF mRNA generates five different isoforms with a different number of amino acid residues by alternative splicing, labeled VEGF121, VEGF145, VEGF165, VEGF189, and VEGF206[39]. Although only three types (VEGF121, VEGF165, and VEGF189) were detectable in both OA and normal cartilage, their receptors were only found in OA cartilage. OA cartilage secreted a significantly higher amount of VEGF than normal cartilage when cultured in vitro. VEGF expression is induced by mechanical forces on articular cartilage[40]. Therefore, it is thought that VEGF may regulate chondrocyte differentiation in response to mechanical forces[41]. After inducing DMM in mice, immunostaining showed increased levels of VEGF in articular cartilage, subchondral bone, synovium, and meniscus.

Expressions of p16, p21, and p53 increase in senescent cells, which result in cell cycle arrest. Articular chondrocytes with increased expression of p16 and p21 exhibit increased senescence. Chondrocytes expressing p53 showed similar morphology to OA chondrocytes and underwent apoptosis, whereas downregulation of p53 expression prevented chondrocytes from undergoing senescence or apoptosis[47]. Chondrocytes expressing p16 lose their normal phenotype and express increased inflammatory cytokines and MMPs such as IL-1β, IL-6, and MMP13[22]. In chondrocytes isolated from cadaveric donors without evidence of OA between 17 to 72 years old, age was found to be responsible for 27% of the variation in p16 levels. However, loss of p16 was not critical enough to prevent the development of age-induced or injury-induced traumatic OA[48]. Collagen type II expression is negatively correlated with p21 expression[49].

Oxidative stress caused by ROS is a major regulator in cell senescence. ROS induce multiple genes that spark senescence or dedifferentiation in chondrocytes. The main ROS reported to induce cartilage damage in chondrocytes are hydrogen peroxide (H2O2) and peroxynitrite[50][51]. Degenerated cartilage regions in OA patients had significantly lower anti-oxidative potential than the intact cartilage region, confirming increased oxidative damage in degenerated cartilage[52]. Chondrocytes treated with H2O2 showed shorter telomere length in vitro. When OA cartilage tissue was cultured with H2O2 addition, the number of glycosaminoglycans (GAGs) gradually decreased in a time-dependent manner. However, the addition of an anti-oxidative agent reversed these effects, inhibited GAG loss, and maintained telomere length. H2O2 addition significantly increased p21 expression in both early and late passage chondrocytes[53]. The expression started to increase one hour after treatment and reached its highest level after three hours, and the change in early passage chondrocytes was nine-fold higher than the initial level.

Growth factors such as BMPs and other cytokines are reported to play a role in chondrocyte hypertrophy. Several BMPs enhance chondrogenesis; however, dysregulated levels of BMPs may induce calcification of cartilage and accelerate cartilage degradation. During OA development, chondrocytes reportedly express BMPs [54][55]. The BMP canonical smad1/5/8 pathway is thought of as an inducer of chondrocyte hypertrophy and EO[56]. Cytokines such as IL-6 and IL-8 are known to induce growth arrest of senescent cells when secreted into the cell microenvironment. IL-1β is associated with chondrocyte dedifferentiation, and induces repression of SOX9 and the synthesis of nitric oxide (NO)[14][57]. The induction of NO by IL-1β activates c-Jun N-terminal kinases (JNK) signaling, which is a well-known inducer of senescence[58]. IL-7 is a cytokine that is upregulated age-dependently[59]. The expression of IL-7 is higher in cultured articular chondrocytes from older donors compared to that of the younger donors. Furthermore, increased levels of MMP13 are induced in chondrocytes after IL-7 treatment[60].

Advanced glycation end products (AGEs) are produced from reducing sugars and free amino groups of proteins, lipids, or nucleic acids by a non-enzymatic reaction[61][62]. AGE accumulation suppresses collagen type II production and also stimulates the expression of MMPs and ADAMTSs[63][64][65]. Collagen cross-linking is increased by AGEs, which enhances tissue stiffness[66][67]. Increased AGEs are pathogenic and induce oxidative stress and inflammation. AGEs also induce the secretion of TNF-α, and NO[64][68] .