Microorganisms are a diverse group of microscopic organisms including archaea, bacteria, fungi, protozoa, algae, and viruses. Microbial diversity produces a massive pool of unique chemicals, which have become a valuable source for innovative biotechnology. About 23,000 secondary metabolites from microorganisms are known, out of which actinomycetes exclusively produce approximately 42%, whereas fungi form almost similar amounts (42%), and the remaining 16% is produced by eubacteria.

Microbial secondary metabolites, including growth hormones, pigments, antibiotics, antitumor agents, etc., are not utilized for their growth and development, yet they have been revealed to have an excellent perspective for human health. These bioactive compounds have become significant sources of life-saving drugs [1]. These secondary metabolites are chiefly produced due to the induction of some cryptic gene clusters, which are generally inactive under normal conditions; hence, their expression would be significant in exploiting microorganisms’ chemical diversity. Many of these secondary metabolites hold specific antioxidant potential. Such bioactive molecules act as a valuable components for biotechnological applications, specifically for pharmaceuticals, nutraceuticals, and cosmetic industries.

According to the Business Communication Company (BCC), in 2014, the total worldwide market for microbial products was estimated to be approximately $143.5 billion. It was expected to increase up to $306 billion from 2015 to 2020, at a compound annual growth rate (CAGR) of nearly 14.6%. Advancements in new technologies and economic advantages are substituting synthetic products and production processes with microbial products. The primary end-user market for microbes and microbial products is the healthcare sector, which was about $100.4 billion in 2014, approximately $111.5 billion in 2015, and was expected to increase to $187.8 billion in 2020 [2][3].

Microorganisms produce various bioactive compounds with antioxidant properties. Sen et al. [4] highlighted the classification of microbial antioxidants based on their chemical structure. They discussed the challenges faced during the development of food-grade microbial pigments and the use of cost-effective and advanced techniques to increase the production and shelf life of microbial pigments, eventually lowering the production costs. Chandra et al. [5] explored and summarized the antioxidant potential of microorganisms and throw light on using these bioactive metabolites for food, agriculture, pharmaceutical, and nutraceutical industries. The present review proceeds with the actinomycetes, exploring the potent antioxidant compound mycothiol, its metabolism, and mechanism to detoxify electrophiles, arsenate, H2O2, etc., and also explores other antioxidants reported from them. The later section includes the antioxidants reported from archaea and bacteria. Mishra et al. [6] briefly reviewed some probiotic strains’ antioxidant properties, but they failed to dig into the pathways and signaling mechanisms followed by them to suppress oxidative stress. In comparison, Feng et al. [7] reviewed the antioxidant capacity, mechanisms, and signaling pathways followed by probiotic bacteria to overcome oxidative damage. They also discussed the genes associated with lactic acid bacteria (LAB) redox potential and suitable methods to evaluate LAB’s antioxidant capacity, yet the current research scenario’s information is lacking.

Protozoa and yeast are the least explored; not much detail is available on their antioxidant potential. Here, we discuss the antioxidant potentials of yeast and protozoa with a detailed description of peroxiredoxins (Prxs) from yeast. Though many studies are available on microorganisms’ antioxidant potential [5][7][11][12], there have been comparatively very few studies that illustrate the various antioxidant bioactive compounds from microbial sources and their mode of action to scavenge free radicals. We analyse the signaling pathways by which mycothiol, astaxanthin, LAB, and Prxs to cope up with oxidative stress and finally summarize the prospect and challenges to be overcome to find out novel and potent antioxidant microbial compounds.

2. Microorganisms as a Source of Antioxidant Compounds

The actinomycetes are gram-positive, aerobic, filamentous, and spore-forming bacteria, with a superior reputation in producing different kinds of metabolites with a broad spectrum of biological activities, including antioxidant, antifungal, antibacterial, and insecticidal activities.

Mycothiol (MSH), a principal “sugar” thiol present in the cell wall of actinomycetes, serves as the glutathione (GSH) analogue. Actinomycetes lack the enzymes for GSH biosynthesis, but as a substitute, they utilize alternative low molecular weight thiols (LMW), such as bacillithiol (BSH) and MSH, ergothioneine (ESH) [13]. MSH maintains the intracellular redox homeostasis, allowing the appropriate working of many biological processes, counting enzyme activation, DNA synthesis, and cell-cycle regulation. MSH is a potent antioxidant, which acts as an electron donor/acceptor and assists as a cofactor in detoxifying free radicals, xenobiotics, and alkylating agents. Unlike GSH, MSH has two sugar components viz. N-glucosamine, inositol, and cysteine components as an alternative to the two amino acids, glycine, and glutamic acid [13]. 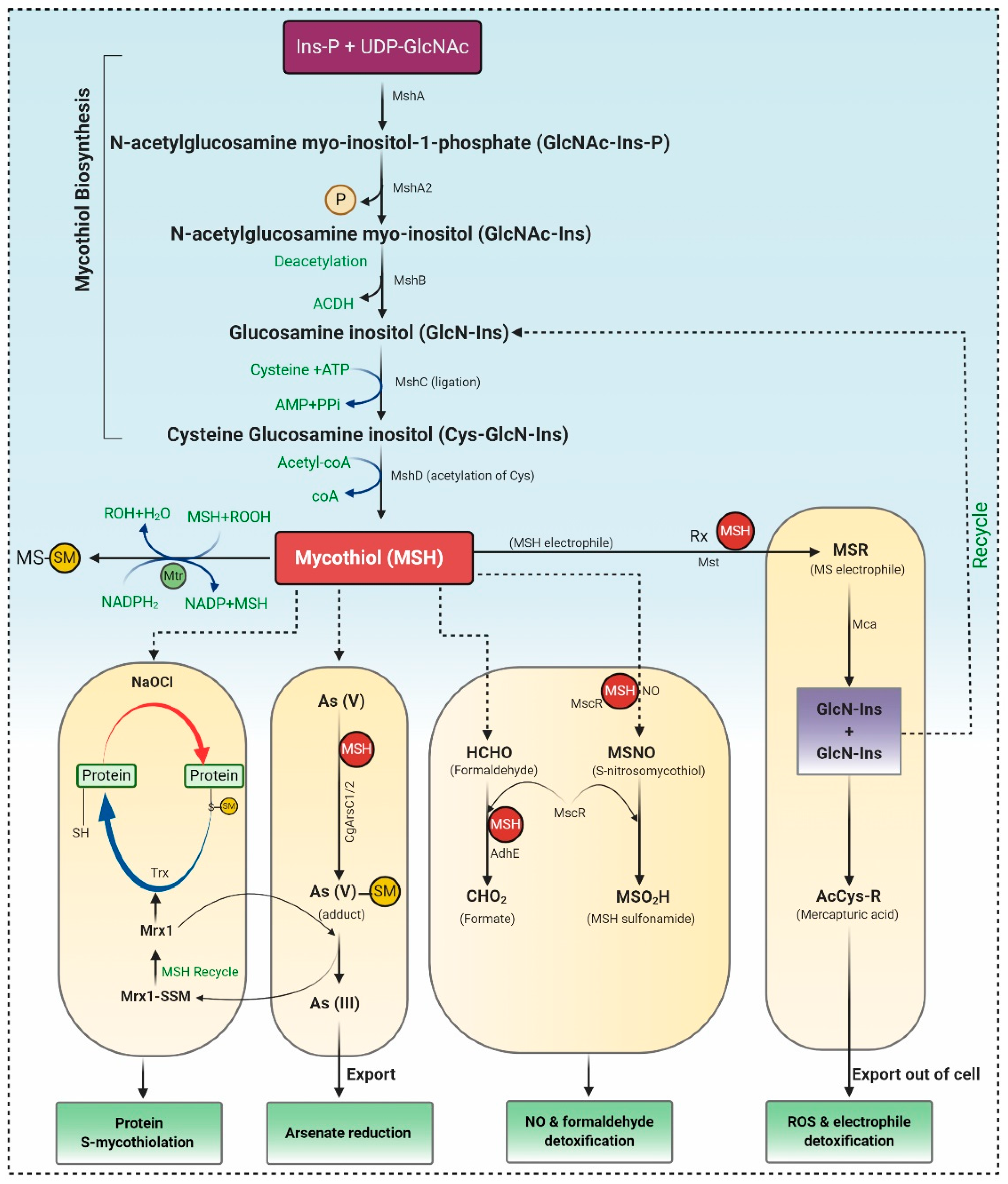 Figure 1. MSH biosynthesis and regulation in actinomycetes. Synthesis of MSH is catalyzed by five enzymes, including MshA, MshA2, MshB, MshC, and MshD. 1) Under Reactive Oxygen Species (ROS), MSH is oxidized to MSSM, which is further reduced by Mtr. 2) S-mycothiolation and protein regeneration occur via Mrx1 (mycoredoxin 1) /MSH/Mtr and thioredoxin/Thioredoxin reductase (Trx /TrxR) pathway. 3) Arsenate reductases CgArsC1/CgArsC2 along with MSH and Mrx1 reduced As (V) to As (III), which is exported through ABC transporter. 4) MSH acts as thiol cofactor for alcohol dehydrogenase MscR and formaldehyde dehydrogenase AdhE and is involved in NO and formaldehyde detoxification. 5) Mycothiol amidase (Mca) and mycothiol-S-transferases are involved in ROS and xenobiotic detoxification.

Archaea specifically grow in harsh environmental conditions such as significantly higher or lower temperature, pH, salinity, etc. Halophilic archaea are a more promising candidate for producing carotenoids, thereby they show red and orange colored colonies. A universal purpose of carotenoids is their antioxidant activity leading to the protection of cells against oxidative stress, thus benefiting human health. Most haloarchaea biosynthesized bacterioruberin (BR), a C50 carotenoid, and its precursor bis-anhydro bacterioruberin (BABR), 2-isopentenyl-3,4-dehydrorhodopin (IDR), and mono-anhydro bacterioruberin (MABR) are represented in Table 1 [14]. BR present in the cell membrane helps halo archaeal cells acclimatize to hypersaline environments, resulting in stabilizing the cell membrane under such stress. Rodrigo et al. [15] investigate and described the haloarcheal BR production and its applications in biomedicine. In contrast, Giani et al. [14] elaborated BR and its derivatives’ production at mid-and large-scale and discussed its recent biotechnology and biomedicine applications.

Table 1. Characterization of bacterioruberin, and its most abundant derivatives.

Whenever there is a discussion about fungal metabolites, the story of penicillin has been told many times. Alexander Fleming, in 1929 discovered that mold juice’ from Penicillium notatum had antibacterial action and named this biological activity “Penicillin” [18]. In the past few years, researchers instigated to look for a fungal strain that could be grown quickly and produce bioactive metabolites in submerged culture. Later on, Penicillium chrysogenum was selected for large-scale production of Penicillium [19]. A wide range of primary and secondary metabolites including flavonoids, phenols, steroids, alkaloids, xanthones, etc. produced by the most diverse group of fungi, have antioxidant activities, and are highly exploited by the therapeutical, pharmacological, and medicinal sector. Maximum therapeutical and pharmaceutical investigations focused on the species belonging to Ascomycota and Basidiomycota [20], which include endophytic fungi, exhibiting higher antioxidant potential. A wide range of natural products including antioxidants, anticancerous, antiviral, anti-insecticidal, immune-suppressant, antimycobacterial, antimicrobial, and antimalarial, has been reported from endophytic fungi [21].

More than 28,000 potential compounds are reported from microalgae, including hundreds of new compounds discovered every year [22]. Most of them have been described from Chordata (including ascidians) and Porifera (sponges), but they are hard to cultivate, and to attain a sustainable supply of the compounds of interest is problematic. In recent times, high interest is paid in analyzing microalgae’s biotechnological potential as they have short generation time, easier to cultivate, and signify an ecofriendly approach but a less explored resource for drug discovery. Microalgae are photosynthetic eukaryotes comprising one of the key members of freshwater and marine phytoplankton and are exceptional cradles of pigments, carotenoids, ω-3 fatty acids, lipids, sterols, and other biomolecules as depicted in Figure 2 [23]. More than 7000 species are enlisted as “Green microalgae” and they all grow in diverse habitats. Among them, Haematococcus pluvialis is the most important commercial microalgae and is also the richest source of natural astaxanthin which is regarded as “super anti-oxidant” [24]. Apart from β-carotene, astaxanthin has received considerable attention lately. Astaxanthin (3,3’-dihydroxy-β,β’-carotene-4,4’ -dione), a marine xanthophyll carotenoid was first isolated by Kuhn and Soerensen from a lobster [4]. Astaxanthin was initially used as a colorant for aquaculture, besides being approved as a coloring agent for food supplements since 1991. Due to emerging health benefits, demand for astaxanthin has increased rapidly in medicine, food industries, cosmetics, etc. In 2016 market share of astaxanthin was USD 512.8 million, which increased at a CAGR of 6.73% by 2017 and was expected to reach USD 814.1 million and USD 2.57 billion by 2022 and 2025, respectively, worldwide [25][26]. The same is the case with carotenoids, whose market demand was 1.24 billion USD (B$) in 2015 and is expected to rise to 1.6 B$ by 2023 with a CAGR of 3.5%. The demand for lutein in 2015 was 135 M$, which might escalate up to 200 M$ by 2024, with a CAGR of 5.3%. The hike in CAGR is due to the increasing demand for lutein-rich dietary supplements [27].

Microorganisms are easily cultivable and allow a production of natural antioxidants more efficient than in plants. Most microbial antioxidants are nonmutagenic and noncytotoxic compared to the synthetic ones. There is a vast diversity of microorganisms, but only few of them have been cultured and examined for secondary metabolite production. Microalgae, bacteria, yeast, actinomycetes, and mushrooms have revealed the presence of phenols, flavonoids, steroids, and alkaloids of great interest to the pharmaceutical and neutraceutical sectors.

Several molecules with promising antioxidant activity, such as astaxanthin, pestacin, isopestacin, and polysaccharides, are found in fungi and used as functional ingredients in food, nutraceutical, cosmetic, and pharmaceutical products. However, further investigations are required to improve the plethora of active metabolites already reported from fungi. In vitro and in vivo studies proved that ingestion of LAB decreased lipid peroxidation and enhanced the activity of CAT, SOD, and GPx, modulating the redox state of the host cells by regulating signaling pathways. Nevertheless, a better knowledge of their structure and synthesis pathways is required for the use of these LAB as antioxidants. Wild or cultivated mushrooms are rich sources of glutathione and ergothioneine, both having a specific role in defending mitochondria from oxidative damage related to the generation of •O2− due to the leakage of electrons during the mitochondrial ETS (electron transport chain). The presence of torularhodin, peroxiredoxins and thioredoxins in Saccharomyces sp. opens new paths for bioprospecting these compounds since yeasts are used as dietary supplements in the food industry and also have many other industrial applications. The mode of action of these microbial antioxidants has not been entirely elucidated, hence more in-depth studies are needed to improve knowledge and optimize their use. This might also lead to the development of new drugs and applications, taking advantage of the great biodiversity of nature.