An Earthquake Early Warning Systems (EEWS) is the combination of different elements, such as seismometers, sensors, communication appliances, computers, and alarm systems, able to detect and warm of the arrival of seismic waves. It serves to mitigate damages and losses , to be used primarily in moderate and high seismically active regions.

Nowadays, EEWSs are operational or are being tested to soon be fully operational all around the world: in Mexico, Japan, South Korea, Taiwan, Romania, Turkey, India, and the USA, EEWS have been active for many years, whilst in Chile, China, Costa Rica, El Salvador, Israel, Italy, Nicaragua, and Switzerland, EEWSs are being tested [1]. In Asia-Pacific countries, the growth of the construction sector, following the promotion of smart city projects, is expected to create an increasing demand for early warning systems, predominantly for earthquake hazard.

These early warning systems can be network-based, with sensors located in possible seismogenic source areas, to determine the earthquake’s location and magnitude, and to project a certain area’s ground motion using progressive real-time data collected or stand-alone systems that use the first P-waves motion to project the detection site’s ground motion[2].

Figure 1 shows an example of the earthquake early warning system structure, MyShake EWS, developed by Berkeley University in collaboration with other US public institutions, national agencies, and universities [3]. The sensors were spatially organized to create a network covering Californian seismogenic sources. With recourse to algorithms and fixed threshold exceeded, the alert center will issue the warnings with basic information and lead time before the seismic waves’ arrival. 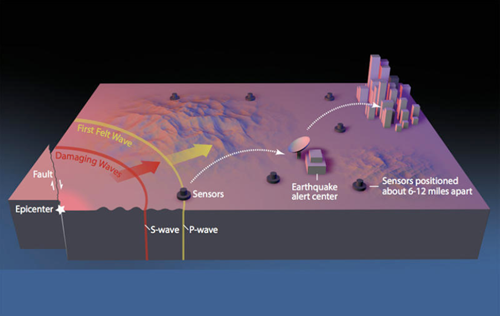 To create a worldwide sensors network, Berkeley University is testing, with the collaboration of Google [3], an application that can record, with end-user’s permission, a smartphone or tablet’s GPS position and movements (along the x, y, and z axes). The innovative system can distinguish seismic waves recorded from other types of movements or actions, like walking, own device vibration, and other anthropic sources of tremors [5].

During the last couple of decades, several algorithms were tested to identify the sources of seismic events, projected ground motion level and the lead time for S-waves arrival (e.g., EPIC, previously named ElarmS v3.0, or FinDer). These algorithms are continuously under test and improvement to enhance their performance. Regional EEWSs typically use a few seconds of P-wave data (0.5–4 s) from a small number of stations (usually two to six) to determine earthquake information [6].

Alerts issued for incoming seismic waves can be broadcast publicly, as in Mexico, Japan, South Korea, and Taiwan, where TV channels, radio stations, and mobile service companies warn the population nationwide. On the other hand, other EEWSs, such as those in India, Romania, Turkey, and the USA, broadcast alerts only to selected groups of users [1].

The applicability of these EEWSs can be limited: distance from the epicenter, hypocenter depth, and magnitude of the event can influence the alert time given to a population and to machines to act [7].

One of the most well-known EEWSs worldwide is managed by the Japanese Meteorological Agency (JMA), that has been broadcasting warnings since 2007. The warning system issues the alarm to the public when the seismic intensity is equal to 5 or above (JMA scale, equivalent to VII–VIII on the Modified Mercalli intensity (MMI) scale), defining the origin time, the epicentral location, the magnitude, and the sub-Prefectural areas that will expect stronger seismic intensity [8]. The system will only issue an alert if the event is detected by more than one station. The lead time for seismic waves to reach the prefectures is not given within the alert information due to a wide time variability between neighboring areas [8]. The alert is broadcast through several television channels, radio stations, loudspeakers, and free text messages are sent by mobile phone companies [8].

Together with this early warning system, Japan has well-developed dissemination and communication strategies to educate the population on earthquakes and actions to be taken.

Another EEWS that has been working for more than a decade is the Mexican Seismic Alert System—SASMEX. The public warning system, operational since 1993, issues an alert when two or more seismic stations detect events with a magnitude higher than 5.5 on the MMI scale. The system counts on a network of 97 monitoring stations that cover the area between Morelia, Mexico City, Puebla, and the Mexican Pacific coast. Warnings are publicly broadcast through TV channels, radio stations, and loudspeakers, together with a dedicated radio channel, SASPER, used to alert authorities, universities, schools, emergency responders, and civil protection. This EEWS successfully alerted the Mexican population of the arrival of the strong-motion waves of the 8.2-magnitude Tehuantepec and the 7.1-magnitude Morelos earthquakes, both in 2017. The warning issued for the 8.2-magnitude Tehuantepec earthquake had a lead time of almost 2 min, while the warning issued for the 7.1-magnitude Morelos earthquake was only a few seconds earlier [9].

The Mexican government has sent educational brochures to 2 million households, providing information on actions to follow and behavior to avoid when a warning is issued. In addition, evacuation drills were organized in schools and in critical structures every month [10].

3. Challenges to the Implementation of Early Warning Systems

Large-magnitude earthquakes can affect huge areas; however, generally speaking, earthquake-induced damage is mostly concentrated at relatively smaller epicentral distances and close to the rupturing fault. Thus, the most critical objective for any EEWS is to provide an initial alert within a few seconds, so that alerts can be issued as close as possible to the epicenter [1].

Following this initial alert, there is time to provide better information or to alert a larger region regarding an upcoming larger event to take place in the tens of seconds that follow.

Allen and Melgar [1] compiled in Table 1 the maximum epicentral distance where the Modified Mercalli Intensity (MMI) V is expected to be felt and the S-wave arrival time at the greatest distance where MMI V is expected, for various earthquake magnitudes and approximate fault length. These arrivals values were computed without considering the stratigraphy or the depth.

At first look, EEWSs can be considered more important for areas in the immediate proximity to seismogenic sources (some kilometers away), but even faraway areas, where quakes will cause less damage, can benefit from these warnings as an opportunity to create a culture of prevention and awareness [11].

An important challenge to be faced by EEWS providers is the need to issue alerts with small lead times together with high reliability to reduce false alarm rates [12].

Knowledge of seismogenic sources and the implementation of a dense seismic network in the fault area are important measures to increase estimations’ reliability on earthquake locations and sizes within ~5 s of the event source [13].

In the future, EEWS algorithms may integrate new sources of ground motion observations and additional data that could reduce detection time and improve early estimation of magnitude and location. For example, to increase the number of strong-motion sensors in urban areas, and to improve the system’s reliability, low-cost sensors can be placed at schools, public institutions, and industrial facilities [14].

For example, on 11 March 2011, the EEWS managed by the Japan Meteorological Agency (JMA), issued accurate warnings to areas near the epicenter. These alerts were issued tens of seconds before the main earthquake hit an area [15]. Following this alert, four nuclear power stations located close to the epicenter of the Great East Japan earthquake shut down automatically and bullet trains were slowed down by their own automated warning system.