Non-Alcoholic Fatty Liver Disease (NAFLD) is a clinical condition primarily characterized by fat accumulation in liver parenchyma (>5% of hepatocytes). Its clinical burden is encompassed in its pathologic spectrum, which ranges from simple fatty liver (Simple Fatty Liver – SFL) to steato-hepatitis (Non-Alcoholic Steatohepatitis – NASH), ending with hepatic cirrhosis and hepatocarcinoma, through a progressive fibrosis of the organ. These advanced stages are associated with higher mortality, but all stages of NAFLD can significantly increase the risk of cardiovascular diseases since these are the most prevalent clinical features in NAFLD.

NAFLD is the most common chronic liver disease worldwide, and its prevalence is constantly rising in the global population, concurring with that of diabetes and obesity. Twenty-five percent of adults are affected by NAFLD and its prevalence doubles in diabetic or obese subjects. An increase of NAFLD incidence has been reported in the last two decades, not only in Western countries, where a sedentary lifestyle and obesity are strongly present in association with hyper-caloric diet, but also in urban areas of developing countries. Approximately a third of patients with SFL develop eventually NASH, although most of them remain asymptomatic. The uprising incidence and the clinical burden of most advanced stages of NAFLD, i.e., complicated cirrhosis, hepatocarcinoma, or ischemic heart disease, make the development of epidemiologic, behavioral, and effective therapeutic strategies a high priority. In the last years, several therapeutic options have been proposed to treat NAFLD. However, until now outcomes are inconclusive as well as it has been managed to improve liver metabolic function and pathophysiological features of hepatocytes stress and inflammation. Approved treatments for NAFLD still do not exist and the available options are essentially based on counsel to switch to healthy lifestyle behavior, such as a healthy diet low in fats and carbohydrates and daily physical activity.

Polyphenols are a diversified class of vegetable-derived compounds, which share the chemical property of being hydrosoluble (figure 1). They are widely found in fruits and groceries, tea, red berries, coffee, red wine, and dark chocolate, and are long-standing well-known as antioxidant agents and proposed as a treatment for several metabolic disorders. Polyphenols represent the most abundant antioxidant in the human diet and their effects, such as those of vitamins, are the cornerstone of the traditionally known benefit of fruits and vegetable intake in several diseases. Due to their great variety, polyphenols are classified into flavonoids and non-flavonoids. Among the flavonoids, which represent the largest family of polyphenols, we find flavones, flavandiols, flavonols, flavanonols, catechins, flavanones, anthocyanidins, and isoflavones. Among the non-flavonoids, we find stilbenes, lignans, and phenolic acids which are divided into hydroxybenzoic acids and hydroxycinnamic acids. Studies have shown that polyphenols can prevent oxidative stress, promoting fatty acid beta-oxidation, and modulating insulin-resistance. Furthermore, it has been reported that these compounds may modulate de novo lipogenesis, by acting on the activity of lipogenic enzymes and improving the expression of lipolytic proteins.

Clinical trials conducted on human subjects suffer from the practical limitation to obtain liver biopsies as well as they can be sampled in animal model studies. Hence, surrogate tools for the evaluation of NAFLD are used in this setting, such as surrogate scores, ultrasonography, or magnetic resonance spectroscopy. Several trials were conducted with the aim to evaluate the effects of polyphenols and NAFLD. Since that inflammation and oxidative stress are the main risk factors involved in the pathogenesis of NAFLD, recent studies suggest that the consumption of polyphenol-rich diets is involved in the prevention and treatment of NAFLD (figure 2).

The interest in polyphenolic compounds as nutraceutical supplementation in NAFLD is increasing, and data from literature show a wide investigation in basic research and animal models. Considered that NAFLD is actually an upcoming challenge for scholars and health systems worldwide, it possible to conclude that polyphenols can be considered as a potential new therapeutic approach to treat hepatic fat accumulation and its sequelae. The potential role of several polyphenols in the prevention and treatment of hepatic oxidative stress and inflammation in the context of liver steatosis is an uprising research domain. In particular, in pre-clinical and clinical settings has been found that polyphenols present many hepatoprotective effects, as the increase of fatty acid oxidation and the modulation of insulin resistance, oxidative stress, and inflammation, the main pathogenetic steps related to the onset and progression from SFL to NASH. However, until now the results from clinical studies are limited and often shown a subtle effect if compared with animal models. Further studies are needed to perform clinical trials for evaluating the achievable doses of individual polyphenols or select their combination for the treatment of NAFLD. 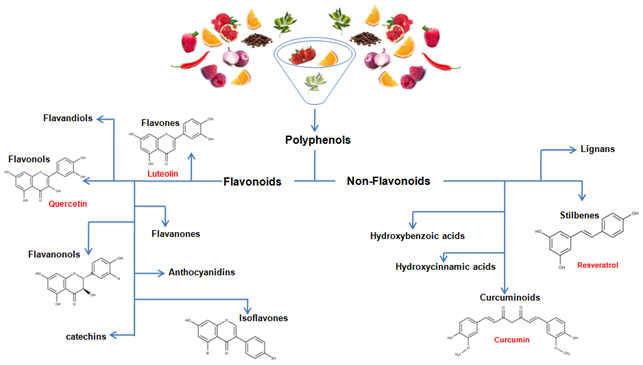 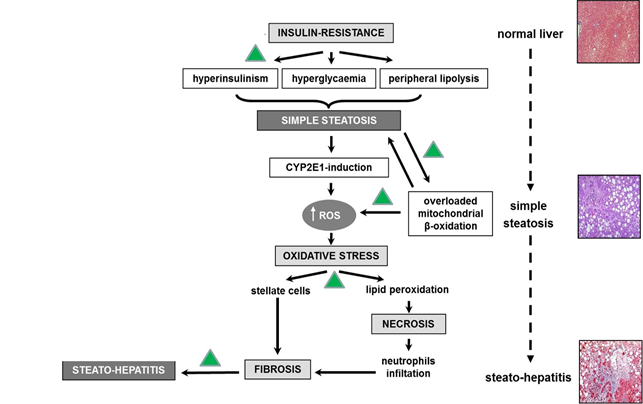