Anatomical resection (AR), described as systematic removal of a liver segment confined by tumor-bearing portal tributaries, may improve survival by reducing the risk of tumor recurrence compared with non-AR.

Hepatocellular carcinoma (HCC) is currently the third leading cause of cancer-related deaths and the fifth most common neoplasm in the world [1][2]. Curative interventions, including surgical resection, liver transplantation, and radiofrequency ablation (RFA), have been recommended for primary treatment [3]. Each of these approaches, if applied in adequately selected patients, could potentially offer a long-term survival benefit [4][5]. Treatment decision depends not only on tumor stages and anatomical locations but also on the patient’s sustenance of liver function [6][7][8]. In patients without significant cirrhosis or portal hypertension, the Barcelona Clinic Liver Cancer (BCLC) staging system suggests resection as the treatment of choice for single or limited numbered HCC [1]. The therapeutic goal is to achieve long-term cancer-free survival by resecting the entire malignant tissue (tumor, satellite nodules, and tumor-adjacent parenchyma) while preserving sufficient non-tumorous liver parenchyma to prevent postoperative liver failure [6][9].

Surgical methods can be broadly classified into anatomical resection (AR) and non-anatomical resection (NAR) [6][10]. First introduced by Makuuchi et al. in 1985, AR is defined as systematic removal of a hepatic segment confined by tumor-bearing portal tributaries [11][12][13], which could be marked by injecting a dye into the relevant portal veins [12][14]. Liver resection is considered AR if the following conditions are met: adequate identification of the resection area by exposing the vascular landmarks (hepatic veins) of the segment and ligation of the Glissonean pedicles at their origin [15]. AR usually involves two or more hepatic segments, whereas NAR involves tumor removal with a margin width of the uninvolved tissue [10]. NAR may benefit patients with HCC having cirrhosis or a less well-preserved liver function. Therefore, NAR can be considered a parenchyma-sparing alternative strategy.

Comparative studies between AR and NAR have indicated that AR provides superior survival benefits by reducing the risk of tumor recurrence and improving overall survival in patients with solitary HCC [16]. A systematic review by Moris et al. suggested that AR provides improved overall survival in patients without cirrhosis [17]. However, Kang and Ahn critically reviewed the results of well-designed comparative studies and suggested no significant difference in improving recurrence-free survival following AR [6]. A nationwide cohort study in Japan that compared AR and NAR reported no survival difference between the two methods in elderly patients with an HCC of less than 3 cm [18]. Until now, no prospective randomized controlled trial has confirmed the survival benefit of AR [6]. The superiority between AR and NAR remains controversial.

AR is one of the strategies for achieving a curative goal and to guide surgical resection. However, facilitating improved survival through curative resection is not limited to AR. Instead of anatomical or non-anatomical, the free (anatomical and microenvironmental) margin is the major concern. Both micro- and macroscopic free margin clearance determines the HCC recurrence rate and survival outcomes.

2. Evaluation of the Hypothesis

2.1. Circulating Tumor Cells Can Be Everywhere

The rationale for AR is theoretically effective for eradicating the intrahepatic metastases of HCC through the removal of tumor-bearing portal territories [12][19]. However, circulating tumor cells (CTCs) can be found in HCC-feeding vessels other than the portal system. Sun et al. [20] reported that the percentages of CTCs detected in blood sampled from a peripheral vein, peripheral artery, hepatic veins, infrahepatic inferior vena cava, and portal vein before HCC resection were 68.5%, 45.2%, 80.8%, 39.7%, and 58.9%, respectively (Figure 1). Moreover, CTCs and circulating tumor micro emboli burden detected in hepatic veins and peripheral circulation, but not portal vein, prognosticated postoperative lung metastasis, and intrahepatic recurrence, respectively. In Qi LN et al.’s study, AR may be more beneficial than NAR only in patients with low CTC count. The balance between operative risk and prognostic benefit is more important than the resection method in high CTC count patients [21]. Recently, Hidaka et al. reported about the pathological aspect of anatomical liver resection and concluded that AR for HCC with micro portal invasion (vp1) did not influence the recurrence-free survival or overall survival rates after hepatectomy [22]. This pathological evidence is consistent with the hypothesis. As HCC neoangiogenesis is not anatomically bound and CTCs can be found in multiple vascular routes other than portal veins, the rationale for performing absolute AR is not sufficiently strong. Surgical eradication of HCC should be flexible and not AR-restricted. The decision of reasonable resection margin clearance should consider the surrounding microenvironment niche [20].

Therefore, HCC neoangiogenesis is not restricted by normal anatomical boundaries. 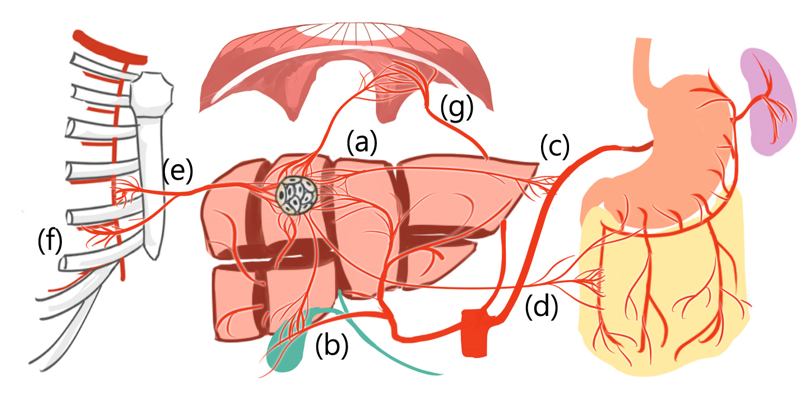 The oncologic benefit is not exclusive to AR. RFA, a non-anatomical tumor ablation treatment performed irrespective of the hepatic blood supply anatomically [26], has proven to be an effective curative treatment alternative for HCC. According to the BCLC staging treatment guideline, thermal ablation, such as RFA, is the curative treatment of choice for patients with early-stage (BCLC 0-A) hepatic tumors [27]. RFA can provide comparable survival outcomes for liver resection with lower complication rates, such as bleeding, bile leakage, and post-treatment liver failure in early-stage HCC [7][28][29]. The statement that AR provides superior survival outcomes and less recurrence might be presumably attributed to larger liver resection with a greater tumor-free margin width [12][16][17].

Another opposing evidence to the use of universal AR is liver transplantation, which could be considered as AR of the whole liver and a new graft implant. However, post-transplant HCC recurrence can still occur at a rate of 13%–27% [30], even under stringent selection criteria [30][31][32]. When the scenario was narrowed down to partial hepatectomy, the survival benefits of AR versus NAR were superior in all HCC patients (cirrhotic and non-cirrhotic) but similar in only cirrhotic patients [17][33][34]. The evidence for improved outcome measures outside of non-cirrhotic HCC patients is limited [34].

Recent advancements in the understanding of tumor biology and microenvironment enable reconsideration of the surgical planning strategy from a broader perspective. Cha et al. investigated the interaction between the tumor microenvironment and resection margin in different gross types of HCC and found that patients with expanding and vaguely nodular HCC may safely undergo surgical resection with a narrow resection margin, and patients with gross types, such as nodular with perinodular extension, multinodular confluent, and infiltrative types, should preferably undergo surgical resection with a wider (more than 2 cm) resection margin considering their tumor microenvironment conditions, namely expression of beta-catenin, matrix metalloproteinase 9, and E-cadherin [35]. The primary goal of surgical resection for primary HCC is to achieve adequate oncological radicality. The decision to choose a non-AR procedure should be based on key factors, such as pre-existing liver disease, tumor burden, recurrence risk, and whether the outcome will be affected by the extent of resection [10]. The post-resection organ failure concern is observed not only in hepatic resection surgery but also in lung resection surgery. Lesser lung parenchyma resection, such as segmentectomy or wedge resection, is indicated for patients who have a compromised pulmonary reserve to prevent post-surgery respiratory failure rather than standard lung lobectomy [36][37].

The key decision in liver resection involves determining the “optimal” amount of non-tumor parenchyma to be removed. Considering the pro-tumorigenic niche heterogeneity in adjacent “non-tumor” parenchyma, which may contribute to future HCC recurrence, the definition of resection margin clearance could additionally be viewed as en-bloc removal of the niche including “HCC will definitely develop” in addition to the infiltration border of current HCC cells. These findings warrant the development of a new surgical planning and navigation strategy.