After their synthesis from cholesterol in hepatic tissues, bile acids (BAs) are secreted into the intes-tinal lumen. Most BAs are subsequently re-absorbed in the terminal ileum and are transported back for recycling to the liver. Some of them, however, reach the colon and change their physico-chemical properties upon modification by gut bacteria, and vice versa, BAs also shape the compo-sition and function of the intestinal microbiota. This mutual interplay of both BAs and gut micro-biota regulates many physiological processes, including the lipid, carbohydrate and energy metab-olism of the host. Emerging evidence also implies an important role of this enterohepatic BA cir-cuit in shaping mucosal colonization resistance as well as local and distant immune responses, tissue physiology and carcinogenesis.

The microenvironment, the tissue milieu and metabolic processes of the host’s own cells and colonizing microbial commensals have a tremendous impact on the development and function of various hematopoietic and non-hematopoietic cell populations in humans. The gut microbiota and their metabolites, for example, contribute to the regulation of many physiological processes and exhibit a pivotal role in maintaining human health. Thus, microbiota signal not only to neighboring but also to distant organs and tissues in the body and interfere, for example, with the brain (brain–gut axis), the liver (liver–gut axis) and the immune and hormone system of the host [1], and vice versa, the host also shapes the intraluminal microbiota. Although the genetic traits of the host as well as dietary and micro-environmental factors presumably contribute to these complex interactions [2][3][4][5][6], it is largely unknown how commensal microbiota are selectively influenced.

Nonetheless, disrupted intestinal microbiota that accompany inflammatory processes in the gut and the subsequent altered availability of microbial- or host-derived products and metabolites are frequently associated with the pathogenesis of various complex disorders [7][8][9][10]. As the etiology of these diseases is multifactorial, they develop as a consequence of a malfunctioning network rather than of a single cause [11]. Thus, the versatile host–microbiota interactions are pivotal for maintaining physiologic homeostasis.

One interesting aspect of host–microbiota interactions is that host- and microbiota-derived enzymes frequently regulate the same pool of intraluminal metabolites [12]. Some physiologic signaling cascades and metabolic processes even require co-metabolism between the host and the microbiota. A classic example of shared alternating enzymatic reactions between mammalians and their intraluminal microbiota is the biosynthesis of bile acids (BAs). In this case, the host synthesizes primary BAs in the liver, which the intestinal microbiota subsequently transform in the gut. This conjugation and deconjugation of BAs plays a pivotal role in many physiological and pathophysiological processes in the liver–gut axis. Here, we discuss a few of them using selected examples of infectious, immune-mediated and tumor diseases.

Bile acids (BAs) are hydroxylated, amphipathic steroid acids that are synthesized in the peroxisomes of the liver from cholesterol [13]. In hepatic tissues, BAs are also conjugated to the hydrophilic amino acids glycine (Gly), taurine (Tau) or sulfate. These BAs are now named primary or conjugated BAs. They consist of cholic acid (CA) and chenodeoxycholic acid (CDCA) or tauro- and glycoconjugated versions thereof (Table 1). While humans preferably use glycine for conjugation, taurine is the most common conjugate of BAs in rodents.

Once synthesized, these primary BAs are secreted into the bile, where they comprise about 80% of the organic compounds [29] and are concentrated for storage in the gallbladder [30]. Ingestion of food triggers the release of cholecystokinin by enteroendocrine cells, which causes gallbladder contraction and the release of primary BAs into the duodenum [31]. There, the primary purpose of BAs is to facilitate the digestion and absorption of dietary lipids, fatty acids, cholesterol, fat-soluble vitamins and other hydrophobic components of the diet via its surfactant properties, which emulsify fats into micelles. Usually, more than 95% of the primary BAs are re-absorbed from the terminal ileum and transported back into the liver via the so-called enterohepatic circulation (EHC) (Figure 1). Upon their return to the liver via the portal vein, primary BAs inhibit cholesterol biosynthesis and further BA biosynthesis [29]. Figure 1. Schematic overview of the enterohepatic circulation (EHC). Primary bile acids (BAs) are synthesized in the liver and secreted into the duodenum with the bile; 95% of the BAs are re-absorbed in the terminal ileum and transported back to the liver for recycling. The remaining 5% enter the colon, where they are transformed into secondary BAs by colonic microbiota.

However, small quantities of primary BAs also reach the colon, where certain gut bacteria transform them into secondary BAs, such as deoxycholic acid (DCA), ursodeoxycholic (UDCA) and lithocholic acid (LCA), by deconjugation, oxidation/epimerization, (7-α-) dehydroxylation and esterification [32][33][34][35] (Table 2). In particular, secondary BAs exhibit strong antimicrobial activity and cytotoxicity. Thus, BAs also regulate the composition of gut bacterial communities and host physiology [32], features that are described in more detail below. Immunoglobulin A (IgA), the major immunoglobulin at mucosal surfaces, enhances the antimicrobial properties of BAs; thus, both BAs and IgA inhibit bacterial growth and adhesion and subsequently protect against ascending infections within the biliary tract. In addition, BAs eliminate bilirubin from the body via the feces [36].

Both, primary and secondary BAs exert biological effects on cells of the host by activating nuclear and plasma membrane receptors, including the nuclear farnesoid X receptor (FXR) or the G protein-coupled receptor (TGR5) [37][38][39][40]. These receptors control the synthesis and metabolism of BAs. However, engagement of these receptors enables BAs to contribute to the regulation of glucose homeostasis, lipid metabolism and energy expenditure [50]. Furthermore, BAs regulate immune responses upon ligation of these two receptors (Figure 2), which are located at the interface of the host immune system with the intestinal microbiota [51]. Both receptors are highly expressed on cells of the innate immune system, including macrophages, dendritic cells and natural killer T (NKT) cells [51]. In particular, TGR5 and FXR regulate the polarization of macrophages and can also rescue mice from severe colitis [52][53]. 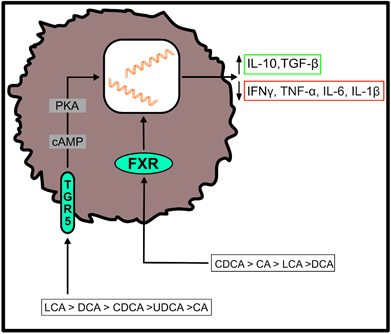 In summary, the main functions of BAs include (a) emulsifying and digesting fat, (b) regulating and excreting cholesterol, (c) exerting antimicrobial effects and (d) eliminating bilirubin from the body. However, as there exist multiple microbes that are tolerant against bile [54], the antimicrobial effects of bile (acids) selectively restrain certain microbial species and subsequently affect the composition of the complete intestinal or biliary microflora.

3. Local Site Microbiota in the Gut and Bile

The intestine hosts complex and dynamic populations of highly diverse microorganisms. These include various bacteria, archaea and eukarya, which form a mutually beneficial relationship with the host. Diet, for example, strongly influences the composition of the microbiota [55][56], and vice versa, intestinal microbiota produce metabolites and extract nutrients from a large range of molecules that enzymes of the host are unable to convert. any of these nutrients and metabolites derived from commensal microbiota have been implicated in the development, homeostasis and function of the immune system, suggesting that microbial commensals influence host immunity via nutrient- and metabolite-dependent mechanisms [57]. Accordingly, an altered composition of the gut microbiota, known as dysbiosis, accompanies many intestinal and extra-intestinal disorders [58].

Similar to the gut, the gallbladder also harbors a complex microbiota. In contrast to the intestine, the microbiota of the biliary tract contains relatively low levels of Bacteroidetes, while numbers of Proteobacteria, Tenericutes, Actinobacteria and Cyanobacteria are increased [59][60][61]. Similar to what is observed with intestinal microbiota, although less well studied, the bile microbiota can be disrupted [59].

4. Crosstalk between BAs and Microbiota

The regulation of the BA pool is one example of the interference of the microbial metabolism with the host [62]. The deconjugation, oxidation/epimerization, (7-α-) dehydroxylation and esterification of BAs by the intestinal microbiota can dramatically change their physicochemical properties and subsequently affect their microbial toxicity and intestinal absorption.

For example, the deconjugation of BAs by microbial bile salt hydrolases (BSH)—abundant enzymes found in all major bacterial phyla—enhances their intestinal re-absorption. Furthermore, it promotes the colonization of the gut by microbiota and can serve as a nutritional source of sulfur, nitrogen and carbon [63][64][65]

7-α-Dehydroxylation converts the primary BAs cholic (CA) and chenodeoxycholic acids (CDCA) into the secondary BAs deoxycholic (DCA) and lithocholic acids (LCA). It is quantitatively the most important and the most physiologically significant conversion of BAs in humans. Deoxycholic acid may even account for up to 25% of the total BA pool. The bacterial species that possess 7-α-dehydroxylation activity include members of the Firmicutes phylum, such as Clostridium or Eubacterium.

The effects of the intestinal microbiota presumably extend further beyond BA composition and biotransformation. In fact, germ-free and antibiotic-treated mice exhibit reduced BA excretion in the feces. In contrast, the BA pool is increased along with enhanced BA secretion and re-absorption from the intestine and an overall altered metabolic homeostasis of the host [66][67][68][69].

As mentioned above, their amphipathic character also supplies BAs with antimicrobial activities. Thus, BAs alter the fluidity, permeability and function of cellular membranes and membrane-bound proteins [70][71]. BAs also cause DNA damage and oxidative stress and affect the formation of RNAs and proteins [70][71][72]. The application of BAs expands Firmicutes at the expense of Bacteroidetes in the gut. Accordingly, increased intraluminal BA concentrations favor the growth of bacterial species that 7-α-dehydroxylate primary BAs into secondary BAs [73][74]. In contrast, lower intraluminal BA levels predominantly favor the growth of Gram-negative bacteria. In addition, BAs also influence the integrity of intestinal epithelial cells and mucosal immune responses and thus indirectly regulate the composition of microbial communities [75][76][77]. As discussed below, secondary BAs can also exhibit toxic effects (Table 2) and promote infectious, inflammatory or malignant diseases.