As Earth’s fossil energy resources are limited, there is a growing need for renewable resources such as biodiesel. That is the reason why the social, economic and environmental impacts of biofuels became an important research topic in the last decade. Depleted stocks of crude oil and the significant level of environmental pollution encourage researchers and professionals to seek and find solutions. The study aims to analyze the economic and sustainability issues of biodiesel production by a systematic literature review. During this process, 53 relevant studies were analyzed out of 13,069 identified articles. Every study agrees that there are several concerns about the first generation technology; however, further generations cannot be price-competitive at this moment due to the immature technology and high production costs. However, there are promising alternatives, such as wastewater-based microalgae with up to 70% oil content, fat, oils and grease (FOG), when production cost is below 799 USD/gallon, and municipal solid waste-volatile fatty acids technology, where the raw material is free. Proper management of the co-products (mainly glycerol) is essential, especially at the currently low petroleum prices (0.29 USD/L), which can only be handled by the biorefineries. Sustainability is sometimes translated as cost efficiency, but the complex interpretation is becoming more common. Common elements of sustainability are environmental and social, as well as economic, issues.

Biofuels can be either fuel additives or almost purely used. Their common characteristics are the organic raw material (e.g., cereals, oilseed crops, fat or waste with organic origin) and their renewable nature. Basically, there are two types of biofuels, ethanol for Otto engines and biodiesel for diesel engines. At this moment, the most common raw materials of biodiesel production are oil-rich plants, such as sunflower seed, rapeseed or palm trees.

The basis of biodiesel production is the raw material. Based on the feedstocks and production methods, we can differentiate between three generations (Table 1).

* It should be noted that the negative CO2 balance is based on the replaced CO2 in biodiesel production, which varies by the different algae species and technologies[1]. Source: authors’ composition based on[2].

Regarding the production process, there are, basically, two methods: cold and hot press extraction with additional transesterification. The latter provides more oil, and therefore large production units use only that method. As a comparison, cold crushers can reach about 80% oil extraction, while hot press extraction (hexane crusher process) may reach up to 99% efficiency, resulting in almost no oil left in the meal[3].

Source: authors’ composition based on[4].

In the case of, e.g., soybean oil, the raw material cost provided 75% of the total production cost based on data from the last 13 years (2007–2019)[5]. This is the reason why the use of used vegetable oils can be more profitable than that of any high-oleic, first-generation raw materials. Besides the raw material cost, low reactor efficiency and material/energy loss during the process could also be significant[6].

At the country level, Table 3 provides an overview of the biodiesel production costs of the major producers.

* Weighting takes into account the approximately 10% lower energy content of biodiesel compared to petroleum[8]. Source: authors’ composition based on[9][10].

The current, low oil price (West Texas Intermediate (WTI) crude oil is 45.52 USD/barrel[11]) results in a 0.29 USD/L petroleum price that causes unprofitable biodiesel production even for the most efficient producer, the USA. This is even worse if the lower energy content of biodiesel is taken into account (weighted USD/L price). Practically it means that without additional support, tax credit or blending mandate, biodiesel production could not be profitable even for the most efficient producers[12] [1]. The major raw material is soybean in the USA, Argentina and Brazil. Although its oil content is low (only 18%), the remaining meal is a valuable feed with good export markets for Argentina and Brazil[13]. In the case of the USA, the production process is also strengthened by genetic engineering to increase soybean yields and oil content. The Indonesian biodiesel production is based on palm oil with a production cost of 0.68 USD/L, while the rapeseed-based European production is the most expensive among the analyzed countries (0.75 USD/L). However, it should be kept in mind that most of these values are subject to changes in exchange rates (local currency/USD), e.g., the strong euro against the US dollar in 2019 made the European production cost higher. 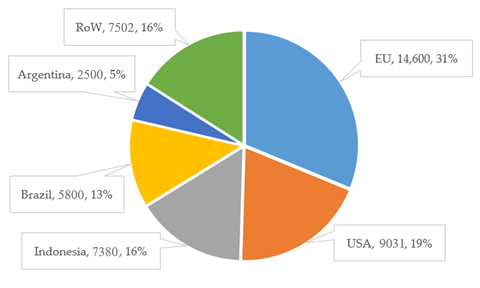 Despite the highest production cost, the EU as a whole is the major biodiesel producer of the world. This reflects the highest share of diesel cars in Europe which was 41.9% of the vehicle fleet[14] with a 35.9% share of new passenger cars in 2018[15]. However, this differs greatly among the member states, e.g., this was 60.0% in Spain, 51.9% in France, 44.4% in Italy and 32.2% in Germany[14]. Biodiesel is used mostly for buses and light, medium and heavy commercial vehicles in the other significant producer countries, as well as being blended with petroleum according to the different blending mandates of the countries. Brazil can be characterized by a high share of flexible-fuel vehicles, while diesel passenger cars have a negligible role in the USA.

As of the future, biodiesel production is expected to decrease by 2.53% in the next ten years; however, the market structure will not change significantly[9]:

Beside the commercial vehicles, biodiesel is used as an additive to petroleum. Its share can vary between 1 (B1) to up to 100% (B100). Blending mandates are an important and stable element of the biodiesel demand, and they also maintain and even boost the biodiesel production. Maintaining biorefineries is important, independent of the (low) oil prices, as they are an important source of innovations. Biodiesel blending mandates vary around the world[16]: