The fluorescent carbon dot is a novel type of carbon nanomaterial. In comparison with semiconductor quantum dots and fluorescence organic agents, it possesses significant advantages such as excellent photostability and biocompatibility, low cytotoxicity and easy surface functionalization, which endow it a wide application prospect in fields of bioimaging, chemical sensing, environmental monitoring, disease diagnosis and photocatalysis as well. Biomass waste is a good choice for the production of carbon dots owing to its abundance, wide availability, eco-friendly nature and a source of low cost renewable raw materials such as cellulose, hemicellulose, lignin, carbohydrates and proteins, etc.

First discovered by Xu et al. in 2004 [1] and subsequently named by Sun et al. in 2006 [2], carbon dots (C-dots) are novel fluorescent carbon nanomaterials and among the most important members of the carbon nanomaterials family. In general, C-dots are well-dispersed spherical particles with particle size less than 10 nm. Besides the high quantum yield and adjustable emission wavelength, which are also possessed by traditional semiconductor quantum dots, C-dots have many other excellent characteristics, including good photostability, low cytotoxicity, good biocompatibility, easy surface modification and high chemical inertness, and therefore have attracted considerable scholarly attention in recent years. Hence far, C-dots have been widely used in many fields such as cell imaging [3][4][5], in vivo imaging [6][7], drug delivery [8][9][10], fluorescence sensing [11][12][13], photocatalysis [14][15][16], multicolor light-emitting diode (LED) production [17][18], energy conversion and storage [19][20][21], etc. C-dots are gradually become one of the research hotspots in the above-mentioned fields and considered as a potential substitute for semiconductor quantum dots.

The controllable synthesis of carbon dots is currently still in the early stage of its development. The synthesis methods can be divided into two main categories, top-down and bottom-up approaches (Figure 1). The top-down approaches include electrochemical oxidation [22][23][24], arc discharge [25] and laser ablation [26][27][28], which involve the exfoliation process of larger carbonaceous materials (e.g., large-size graphene, carbon nanotube, graphite, commercial activated carbon) into nanoscale C-dots. During the synthesis of C-dots using top-down approaches, harsh experimental conditions (e.g., strong acid and arc discharge), tedious operation steps and expensive equipment are usually employed, which greatly limit their practical application. The bottom-up approaches, such as the microwave-assisted method [29][30][31], pyrolysis [32][33][34], solvothermal method [35][36][37], ultrasonic method [38][39][40], on the contrary, convert small molecules into C-dots via carbonization and passivation. They have the advantages of cost-effectiveness, easy operation and simple equipment requirements, and hence have been widely used in the synthesis of C-dots. 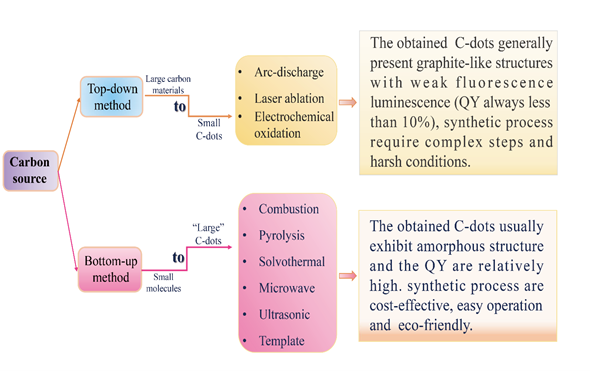 Figure 1. The top-down and bottom-up approaches for synthesizing of C-dots (QY refers to fluorescence quantum yield).

2. Synthesis of C-dots from Biomass Wastes

Biomass is a complex, abundant, heterogeneous，biodegradable and bio-organic substance that may be obtained from diverse sources such as perennial grass, organic domestic garbage, residues of agriculture, fishery, poultry, animal husbandry, forestry and related industries [46][47][48] (Figure 2). Biomass waste is a natural organic carbon source, mainly composed of cellulose, hemicellulose, lignin, ash, proteins and some other ingredients. Taking plant biomass waste as an example, among which, cellulose accounts for 30–60%, hemicellulose 20–40%, lignin 15–25% [49]. Biomass waste is a renewable, environmentally friendly, abundantly available and innocuous carbon source for C-dots production. However, most of the biomass waste is currently discarded, landfilled or openly burned, which not only lead to a waste of resource but also cause some environmental problems threatening human health [50]. Recently, there have been some attempts to utilize biomass wastes as raw materials in the production of C-dots. In the following sections, the methods for the synthesis of carbon dots from biomass waste are discussed. 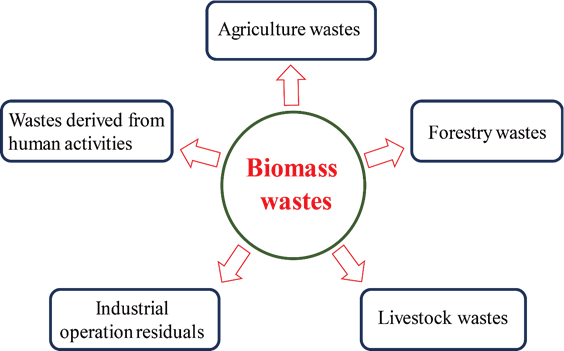 Pyrolysis is a widely used approach for preparing C-dots. The organic substance in the carbon source is gradually converted into carbon dots via heating, dehydration, degradation, carbonization under high temperature in either vacuum or inert atmospheres. High-concentration acid or alkali is generally used in the pyrolysis method to cleave carbon precursors into nanoparticles. All kinds of biomass materials, including watermelon peel, sago waste, coffee grounds and plant leaves, could be used as carbon sources for producing C-dots by pyrolysis method. The properties of the obtained C-dots can be regulated by changing the conditions of pyrolysis, such as pyrolysis temperature, pyrolysis duration, and the pH value of the reaction systems [51]. Zhou et al. [52] achieved large-scale production of C-dots by pyrolysis of waste watermelon peels under low-temperature followed by filtration. The obtained C-dots possess strong blue luminescence, excellent water solubility, good stability in solutions with a wide range of pH and high salinity. The as-prepared carbon dots were successfully used in HeLa cell imaging (Figure 3a). Fluorescence C-dots with a quantum yield of 10.6% and low inherent cytotoxicity was obtained by pyrolysis from lychee seeds [53] and used for fluorescence imaging of living HepG2 cells (Figure 3b). Xue et al. [54] proposed a simple and economical pyrolysis method for the synthesis of fluorescent C-dots from peanut shell waste. The C-dots obtained were N-doped carbon nanomaterials with a quantum yield of 9.91% and possessed good stability, good photo-bleaching resistance, high tolerance to large fluctuation in pH and ionic strength. The surface of the N-doped carbon dots contained a variety of functional groups such as hydroxyl, carboxyl and amino groups. The authors claimed that the emission spectrum of the C-dots prepared by their method was excitation-wavelength-dependent, which was attributed to a wide range of particle sizes and emissive sites. This kind of C-dot was successfully applied to live-cell multicolor imaging (Figure 3c). Praneerad and coworkers [55] prepared C-dots from durian peel waste by pyrolysis method and used them as an effective dopant to construct a composite electrode with a specific capacitance of 60 F·g-1, much higher than that of the pure activated carbon electrode. Sago industrial waste was also used as a carbon source for the synthesis of C-dots by a simple thermal pyrolysis method [56]. The effects of pyrolysis conditions on the physical appearance, particle sizes and fluorescence intensities of C-dots produced from sago industrial waste were investigated in detail [56]. In another article, bio-waste sago bark was also used as a starting precursor for the synthesis of C-dots through a simple one-step pyrolysis method [57], the results obtained by cell viability assay suggested that the C-dots produced from sago industrial waste have low cytotoxicity to cells, and hence can be potentially used for cell imaging. Furthermore, the porosity of the C-dots obtained by pyrolysis approaches endows them with potential applications in anticancer drug delivery. 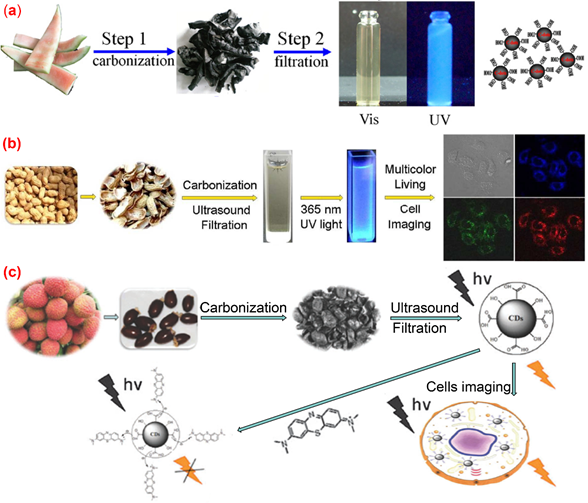 The solvothermal method is quite popular in the synthesis of C-dots. The organic or inorganic carbon source is mixed with one or several solvents in a stainless steel autoclave with a Teflon liner. After a certain period time of continuous heating, the raw carbon source will be converted to C-dots in the air or inert atmosphere under high temperature and pressure conditions. The solvothermal method has the advantages of environmental friendliness, low cost, easy operation and requirement of simple equipment. A variety of carbon precursors can be used for the synthesis of C-dots by the solvothermal method. Table 1 summarized the properties and applications of C-dots synthesized from various biomass waste by solvothermal method. For example, Lu et al. [58] utilized pomelo peel to synthesize water-soluble C-dots with a quantum yield of 6.9% for the selective and sensitive determination of Hg2+ by hydrothermal method (Figure 4a). Prasannan et al. [59] proposed a facile one-pot hydrothermal carbonization method for the synthesis of fluorescent C-dots from orange waste peels under mild conditions and composited the C-dots with ZnO for photo-catalyzing degradation of naphthol blue-black azo dye under UV irradiation (Figure 4b). Tyagi et al. [60] obtained C-dots with spherical morphology and oxygen-rich surface functionalities from lemon peel waste through a facile hydrothermal process and applied them to the determination of Cr6+ and the preparation of TiO2–C-dots for the photocatalytic degradation of methylene blue dye under UV light irradiation (Figure 4c). Liu et al. [61] synthesized C-dots with a quantum yield of 7.1% from waste bamboo leaves via the hydrothermal method and coated the C-dots with branched polyethylenimine through electrostatic adsorption for the selective and sensitive detection of Cu2+ in river water (Figure 4d). Moreover, Sarswat et al. [62] utilized food, beverage and combustion wastes as resources to produce multicolor and highly luminescent C-dots for the fabrication of light-emitting diodes. In Table 1, carbon dots obtained from various biomass waste by the solvothermal method were demonstrated. Obviously, due to the high efficiency and easy operation, the solvothermal method is one of the most frequently used methods for carbon dots preparation. 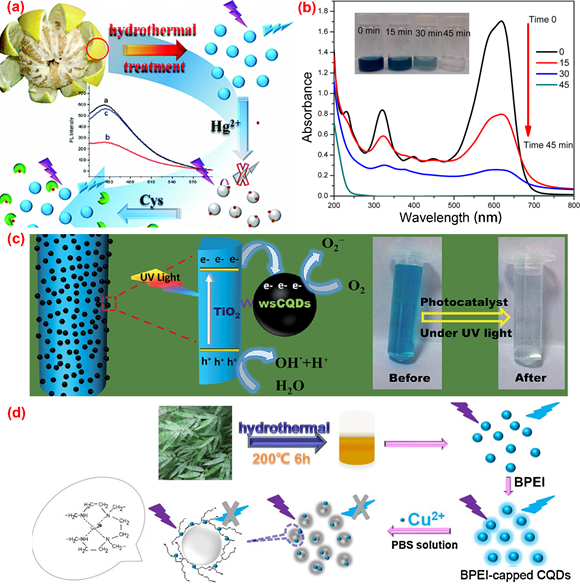 Figure 4. The preparation of fluorescence C-dots from biomass wastes through the hydrothermal method. (a) The preparation and application of C-dots from pomelo peel [58]; (b) absorption spectra of naphthol blue-black (NBB) azo dye over C-dots/ZnO at different irradiation intervals [59]; (c) the photocatalytic degradation of methylene blue (MB) on TiO2–C-dots composite under UV light irradiation [60]; (d) the synthesis and application of C-dots from bamboo leaves [61].

Table 1. The properties and applications of C-dots produced from different biomass waste by solvothermal method.

1 refers to the reference. 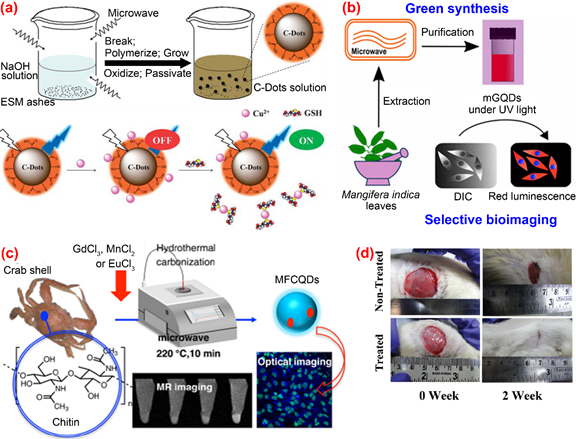 Ultrasonic-assisted method for the synthesis of C-dots has the advantages of low cost and easy operation. C-dots could be obtained through the ultrasonic treatment of mixtures of solvents and carbon sources. The properties of C-dots could be regulated by simply adjusting the experimental conditions such as the ultrasonic power, reaction time, the proportion of solvents and carbon sources, etc. Park et al. [82] proposed a simple method based on ultrasonic treatment for the large-scale synthesis of water-soluble C-dots from food waste-derived carbon source and achieved the production of 120 g C-dots produced from 100 kg of food waste mixtures (Figure 6). The obtained C-dots exhibited high water solubility, high photostability, good photoluminescence and low cytotoxicity for in vitro bioimaging. Furthermore, the byproducts produced in the synthesis of C-dots from the food-waste-derived source could promote seed germination and plant growth.

Thambiraj et al. [83] developed a top-down approach involving chemical oxidation and a simple exfoliation process for green synthesis of fluorescent C-dots from waste sugarcane bagasse pulp. The as-prepared C-dots had features of high fluorescent quantum yield (about 18.7%), highly crystallinity and excellent biocompatibility (Figure 7a). Sugarcane bagasse was also used as a carbon source by Jiang et al. [84] in the preparation of red-emitting C-dots for selective determination of gaseous ammonia via carbonization using concentrated sulfuric and phosphoric acid (Figure 7b). One-step synthesis of sulfur-doped C-dots from waste frying oil by the use of concentrated sulfuric acid as the carbonization agent was proposed by Hu et al. [85]. Due to its strong dehydrating and oxidizing properties, concentrated sulfuric acid could promote the conversion of saturated C-C single bonds into unsaturated C=C double bonds and the formation of hydrophilic C-O-H and O=C-O-H from hydrophobic C-H. The C-dots synthesized from frying oil displayed a pH-sensitive fluorescent behavior and therefore were used the fluorescence probe for sensing and imaging pH changes in living cells (Figure 7c). Cheng et al. [86] reported a chemical cutting approach for preparing fluorescent C-dots from walnut shells. The prepared C-dots were featured with good photostability, resistance to high ionic strength, stable up-conversion fluorescence and excellent cytocompatibility, which could be applied to the imaging of living cells and tissues (Figure 7d). C-dots with high fluorescence quantum yield of 36% were prepared from polystyrene foam waste by Zhang et al. [87] using a facile synthesis method based on the traditional organic solvent extraction. C-dots with different emission wavelengths were obtained under different solvent conditions. The authors studied the mechanisms of the formation process and the luminescence performance of the C-dots. The effectiveness of surface passivation was considered as the main factor causing the difference in fluorescence emission wavelengths of C-dots. 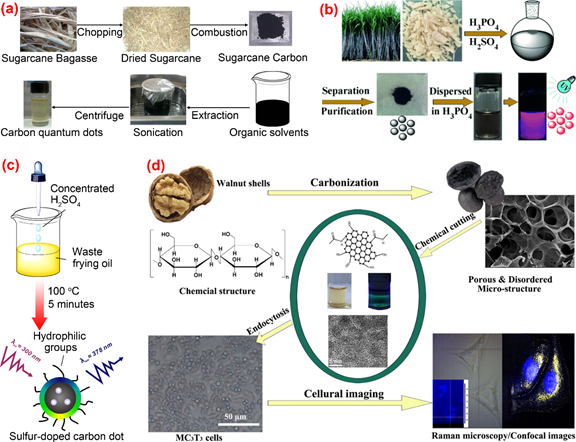 Among the above-mentioned synthetic approaches for the preparation of C-dots, the hydrothermal approach is the most widely used one for its advantages of convenience, cost-effectiveness, easy operation and eco-friendliness. However, the synthesis of C-dots by the hydrothermal approach is generally considered a time-consuming process. Although the microwave-assisted method is not used as frequently as hydrothermal and pyrolysis approaches, its features of time-saving, low cost and easy operation are extremely attractive for the green synthesis of C-dots from renewable biomass wastes.