The continual detection of endocrine-disrupting chemicals (EDCs) (ng/L or µg/L) in water and wastewater has attracted critical concerns among the regulatory authorities and general public, due to its associated public health, ecological risks, and a threat to global water quality. Presently, there is a lack of stringent discharge standards regulating the emerging multiclass contaminants to obviate its possible undesirable impacts.

1. Occurrences of EDCs As Contaminants and its Sources

Steroidal estrogens, such as estrone (E1), estradiol (E2), together with estriol (E3), are naturally occurring in animal and human bodies through 17-α-ethynylestradiol (EE2) is produced primarily for contraceptive pill [5]. Notably, compounds, such as 17β estradiol (E2), 17α-ethinyl estradiol (EE2) together with estriol (E3), are currently obtained in the watch list of EU Commission Decision 495/2015 and are considerably investigated, due to their elevated estrogenicity at minuscule proportions (µg/L and ng/L) and their detection in various environmental matrices particularly effluent from sewage treatment plants, surface, drinking, and groundwater (see Table 1) [6][7].

Also, environmental xenoestrogens, including bisphenol A (BPA), which flow into WWTPs via discharges from the industrial sector and leaking from BPA-based products [8], 4-tert-octylphenol (4-t-OP), and 4-nonylphenol (4-NP) are synthesized with increased volume of production [9].

There is no doubt that EDCs contaminants are typically detected in the range of nanograms to micrograms (ng/L and μg/L) in the environment and predominantly occur in numerous matrices, for example, soils, water (groundwater, wastewater, surface waters, drinking water), biota, sediments, and air [10][11][12], conceivably triggering possible hazards to public health and the ecosystems. As indicated in Figure 1, these contaminants can infiltrate directly into the aquatic environment via effluent outflow and indirectly as run-off. Nevertheless, the primary route of EDCs contaminants to the freshwater bodies is treated and raw urban effluent release into waters-bodies [13][14]. Moreover, most of the treated potable-water resources may be polluted through deep-well injection of the effluent and surface outflow [15]. This flaw provides evidence that even drinking water is not free from these recalcitrant contaminants, since some compounds of EDCs, specifically plasticizers and steroidal hormones, were detected in drinking water, surface water, and groundwater (see Table 1) [16][17][18][19].

Similarly, studies from Jonker et al. [20] and Cai et al. [21] in their studies reported that EDCs in the water bodies emanate from human-induced sources (anthropogenic), namely, industrial wastewaters and effluent of municipal, run-off water from polluted soils via pesticides containing EDCs compounds, such as alkylphenol polyethoxylates (APnEOs) or alkylphenols (APS), and the application of sludges (sewage) on cultivated fields. ApnEOs and APs have a propensity to accumulate and segregate in the environmental sediment. Based on bio-surveillance data, the public at large is susceptible to ApnEOs and APs [22][23]. However, contaminated food and drinking water are the leading cause of human exposure [24][25] or via interaction with detergents and personal care products [26]. This anomaly is due to a substantial proportion of drugs consumed by patients, thereby penetrating through their body unchanged and traverse through human excrement to the wastewater [27].

Notably, the principal route of phenolic EDCs, including BPA and its analogous in an intact organism, is through ingestion, thereby recording almost 90% of BPA vulnerability [28]. The sludge generated in WWTPs is frequently applied in cultivated fields as a soil improvement, in which the detection of these compounds in soils with low sorption affinity may further contaminate the nearby surface and ground waters via infiltration and run-off [29].

Specifically, the pollution of subsurface or groundwater with persistent EDCs microcontaminants is majorly resulting from an interaction between surface and groundwater via soil, sewer systems, landfill leachate, percolation of polluted water from agricultural lands, and seepage of septic systems.

The EDCs contaminants can be analyzed using chemical analytical techniques in aqueous matrices, including high-performance liquid chromatography with mass spectroscopy, gas chromatography with mass spectroscopy, and biological approaches enzyme-linked immune-sorbent assay. Besides, there is increasing utilization of biosensors for this function [30][31]. Various sources and pathways of endocrine-disrupting compounds in the environment are illustrated in Figure 1. 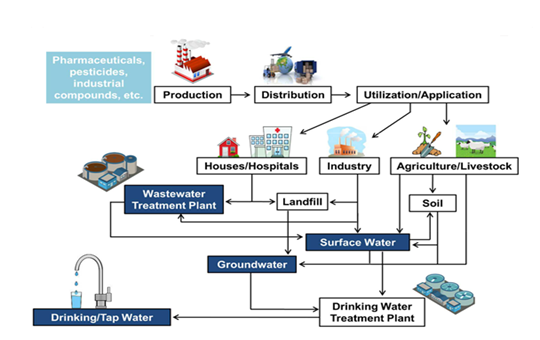 Figure 1. Typical routes and sources of endocrine-disrupting (EDCs) contaminants in the environment [32].

2. Adverse Effects of EDCs on the Environment

Numerous pieces of literature have reported various deleterious impacts of EDCs on the environment and its propensity to distort stability in the ecosystem. Table 1 summarizes some of the harmful effects of frequently discovered EDCs pollutants together with their corresponding concentrations in drinking water, surface water, and wastewater. Bitty concentrations of these emerging pollutants (ng/L to µg/L) have been proven to significantly induce severe consequences on the ecosystem and the health of vertebrate species [33].

Generally, contamination of water, due to the presence of EDCs contaminants, causes several detrimental impacts on both public and wild animals [34]. These chemicals could interfere with the hormonal functions in the endocrine system by functioning as hormone mimics, modifying the metabolism and synthesis of natural hormones, or altering hormone sensory receptor levels and receptor agonists/antagonists [35]. EDCs can presumably lead to many health problems [36]. For instance, the most detrimental and threatening influence occurs in their tendency to trigger reproductive disorders in various species, including humans. The estrogenic impact of EDCs is often described in terms of estradiol equivalent (EEQ), and it has been established that a concentration of 1 ng L−1 EEQ has a severe effect on fish and other marines [37]. EDCs can feminize male fish, adversely impact reproductive performance, decreased sperm counts, and elicit fastllogenin formation [38].

Plasticizer EDCs, such as bisphenol A (BPA) and 4-n-nonylphenol (4-NP), are reduced by several orders of magnitude through estrogenic activities, but are often notable for their elevated levels in drinking water, treated wastewater effluent, surface sediment, and aquatic organism (fish) (see Table 1) [39]. EDCs have also been linked to altered behavior and obesity in children, reduced gonadal development and viability, and altered humans and wildlife [40][41]. The consequences of these persistent contaminants are not only restricted to an adult individual, but the possible mechanism of transgenerational epigenetic inheritance can also be transferred on to future generations [42].

The persistence of EDCs in water, even at trace concentrations ranging from little ng/L to numerous µg/L, are sufficient to elicit endocrine disruption in many species. It is notably dangerous to health, due to its ability to trigger metabolic and reproductive disorders; hence, the need for efficient management of EDCs contained in effluent before discharge is indispensable [43]. Due to environmental hazards linked to the EDCs contaminants, the treatment of outflow discharges emanating from various sources, such as pharmaceutical compounds, pesticides, personal care products, and similar compounds, have received significant global attention [44]. More stringent standards are still necessary for efficient control of these recalcitrant micropollutants, thereby providing considerable control [45]. Primarily, the most practiced management technique is a conventional treatment.

Globally, several EDCs contaminants have been detected in effluent discharged from WWTF, frequently at a proportion of hundreds of nanograms per liter to micrograms-per-liter scale [29]. Furthermore, there has been an increasing amount of literature that emphasized and reported series of health challenges associated with endocrine-disrupting compounds, such as interference with the endocrine system of man and animals by influencing the synthesis, release, transport, metabolism, and excretion of hormones in the body, mimicking, blocking, disrupting the normal function of hormone system in humans thereby causing severe effects, such as abnormal reproductive growth, cardiovascular changes, reduction of sperm reproduction in humans which result to low fertility, thyroid and adrenal gland dysfunctions, immune, neurological diseases, developmental dysfunctions throughout the fetal period, stimulation of breast cancer in women, development of testicular and prostate cancer, a decline in reproductive fitness of men and increased threat to human [46][47][48][49][50][51][52][53][54][55]. In addition, EDCs have also be linked with altered behavior and obesity in children, reduced gonadal development and viability, alter physiological status in humans and wildlife [40][41].

Mostly, exposure to EDCs by humans and animals is through ingestion of accumulation and biomagnification concerning species at a high level of the food chain [56]. Furthermore, research findings also reported negative impacts of EDCs towards animals as it affects the hormonal systems of organisms, inhibiting regular action of the endocrine system, binding to estrogen receptors in wildlife, and mimic the actions of endogenous estrogen, causing reproductive disorders, feminization, and carcinogenesis in numerous wildlife animals, interfering with the synthesis release, transport, combine and interact with female estrogen and disturb the reproduction, growth, and behavior of organisms, interfere with a delicate balance of the endocrine system of animals, alter the normal hormone functions and physiological status in wildlife and threat to health and reproductive biology in an animal population [57][58][59][60][61].

Also, previous studies have widely reported various anomaly observed in the aquatic environment as a result of the presence of EDCs which includes: Bioaccumulation and biomagnification in the marine ecosystem, intersex and skewed sex ratios, reduction in fish fertility, abnormal blood hormone levels, altered gonadal development (imposex and intersex), induction of vitellogenin gene and protein expression in juveniles and males, masculinization/feminization, disruption of the reproductive mating behavior of fish, intersex in white suckers fish downstream of a wastewater treatment plant effluent, hermaphroditism, decreased fertility and fecundity [61][62][63]. Exposure to EDCs has also been reported to pose a potential risk on the water quality and the ecosystem because EDCs can present a potential risk to the ecosystem, affects water quality, increase adverse ecological impacts, and be considered as an environmental pollutant with comparatively high biological activity [64].

Continuous consumption and disposal of EDCs into urban sewage have consequently caused the conventional treatment systems to be a possible and important route of EDCs contaminants in the vicinity. Hence, the release of treated water from traditional treatment facilities into groundwater, open water, and other waterbodies regularly can efficiently heighten the tenacity of EDCs in the vicinity, since findings have revealed that minuscule amounts of major EDCs are eliminated from the conventional treatment systems [65][66]. In some instances, the concentration of EDCs effluent could surpass the feed concentration, mainly owing to the biological changes taking place during biological degradation[67].

Furthermore, the findings have shown that in particular, EDCs can alter endocrine functioning by harming the normal physiological reactions concerning the male and female reproductive orderliness (such as menstrual cycle abnormalities, alteration of hormone concentration, impulsive abortion, endometriosis, and polycystic ovarian disorder [68][69][70].

For instance, Giulivo et al. outlined the possible role of EDCs (such as phthalates, bisphenol A and parabens) on the pathogenesis of breast cancer at minimal proportions [71].

The challenge to be tackled is how there can be a drop in the input of the EDCs in the environment. Kummerer [76] suggests that the technical approach of improving the conventional treatment systems to advanced treatment applications as a short-term to medium-term strategy along with the replacement of dangerous compounds used in the manufacturing of chemical compounds with more non-threatening chemicals as a sustainable strategy will be a beneficial means for managing the associated risk of EDCs in the environment. Hence, conventional treatment systems should be upgraded with advanced treatment technologies, including membrane separation techniques, membrane bioreactor (MBR), and other advanced oxidation processes, ultraviolent irradiation to forestall the challenges associate with the extermination of these persistent contaminants.

3. Rejection of EDCs by Membranes

Membranes are permeable and thin material layers employed to eliminate water pollutants by allowing water to be conveyed at varying rates based on the membrane pore size. [77]. Membrane technology is the most widely applied technique for the elimination of microbes and salt from water. It serves as selective filters or screens, eliminating contaminants bigger than the pore size of the membrane and permitting small-sized contaminants and water molecules to permeate [78]. Membrane processes have been utilized in drinking water and wastewater reuse to remove EDCs and natural organic matter (NOM) [79]. Principally, the membrane is described mostly by driving pressure exerted to the microfiltration (MF), ultrafiltration (UF), nanofiltration (NF), and reverse osmosis (RO) separation process [80]. These processes, as shown in Table 2, comprising of comparatively low-pressure systems, particularly ultrafiltration (UF) and microfiltration (MF) operating at pressures ranging between (5–10 bar), respectively, or high-pressure systems, such as nanofiltration (NF), working at practically 50 bar and reverse osmosis (RO) up to 70 bar (or 150 bar for high-pressure RO systems) [81][82]. These systems have been employed in the rejection of EDCs organic contaminants from different water matrices. However, RO has more critical fouling challenges and displays excellent removal efficiency [83].

Table 1. Outline of membrane processes and their characteristics in order of decreasing nominal pore sizes [84][85].