Polyphenols (PPs) are the naturally occurring bioactive components in fruits and vegetables, and they are the most abundant antioxidant in the human diet.

Plant polyphenols (PPs) are secondary metabolites and are ubiquitously found in various parts of plants like roots, stems, leaves, flowers, and pulp. PPs are considered to be very necessary for plant survival in the environment but not directly responsible for the development and growth of plants. PPs are produced from primary metabolites and intermediates through unique biosynthetic pathways [1]. They are a class of non-essential phytonutrients and are abundant in fruits, cereals, and vegetables [2][3]. Molecules of PPs display at least one aromatic ring carrying one or more hydroxyl groups [4] and they are also found as conjugate with organic acids or sugars or as polymers (flavonoids). Additionally, PPs are hydrolyzable and condensed tannins represent a special group that interacts with proteins [5]. According to Costa et al. [6], around 8000 polyphenolic structures have been recognized. They are subdivided according to their chemical structure (depending on the number of hydroxyls in the molecule and on the nature and the position of other substituents) into the following structural classes: lignans, phenolic acids, stilbenes, condensed or hydrolyzable tannins, and flavonoids (containing anthocyanins and isoflavonoids). It has been documented that PPs are primarily distributed as glycosides in plants and their elementary structure is aglycones. However, the phenolic acids comprise hydroxycinnamic acids (caffeic, ferulic, chlorogenic acid, p-coumaric, and sinapic) and hydroxybenzoic (gallic, syringic acid, vanillic, and protocatechuic acid) in the non-flavonoid group. Phenolic acids exist in plants as soluble-free, conjugate, and insoluble bound forms. Flavonoids are originated from the acetate/malonate pathways that are stored as glycosides in plants. They constitute a large group of phenolic compounds [7]. The majority of flavonoids contain diphenyl propane which is a closed pyran—a variation in the central pyran ring that is due to oxidation and hydroxylation pattern [8]. The presence of conjugated chromophore is considered to be responsible for yellow and red color development in flavonoids. Anthocyanidins (like cyanidin) are an example which illustrates red and magenta color [9]. Flavonoids and their subgroups (flavones, flavanones, flavonols, and flavanonols) are ubiquitous in the plant kingdom [8]. Other PPs such as lignans (e.g., lariciresinol and pinoresinol) are non-flavonoid diphenolic components that are composed of phenylpropanoid units. Stilbenes represents non-flavonoids (including trans-resveratrol), abundantly present in grapes and red wine [10]. Tannins are further subdivided into two groups: (1) Hydrolysed tannins are the esters of gallic acid and egalic acids, while (2) condensed tannins are the polymers of catechin and epicatechin [8].

It has been stated that PPs play a vital role in human nutrition as they have antioxidative ability and can decrease the reactive oxygen species (ROS). Moreover, they can be utilized to ameliorate metabolic disorders like obesity, diabetes, cancer, and cardio-metabolic diseases [11]. Among PPs, phenolic acids can lower the risk of chronic diseases like cardiovascular disease, cancer, etc. Since various diseases have been associated with oxidative stress, dietary PPs reduce the effects caused by excessive ROS or other nitrogen species. By neutralizing the free radicals via donating an electron and as direct radical scavengers of the lipid peroxidation chain reactions, PPs eradicate the oxidative stress [12]. Phenolic acids and flavonoids, including anthocyanins, procyanidins, quercetin, catechins, curcumin, and ellagic acids, have their role in obesity and weight management [13]. Despite their role in disease management, PPs lose their therapeutic properties due to glycosylation and become less available to the target cell. Due to the glycosylated form, their absorption mainly takes place in the colon. Gowd et al. [14] briefly documented the metabolism of PPs in humans and reported that PPs have high molecular weight and complex structure; that is why only 5–10% are absorbed in the small intestine. About 90–95% reach the colon and their GM play a significant role in the breaking down of these complexes and converting them into absorbable metabolites. After conversion into phenolic metabolites, they reach the liver through a portal vein upon absorption. Additionally, they undergo extensive degradation via metabolic reactions to form active metabolites. Then, these metabolites enter into systematic circulation reach target cells and tissues where they can show physiological significance. Unused and remaining metabolites are excreted through urine. The schematic ingestion, digestion, absorption, and excretion of PPs are exhibited in Figure 1. 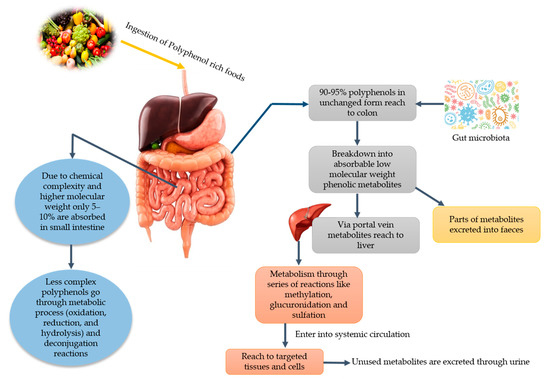 Although 90–95% of PPs are absorbed in the colon, however, their efficacy (in terms of its therapeutic effects) is about 15–20%. Extraction of PPs is a crucial step, and various techniques can be employed that can help to enhance the bioactivity and bioavailability of extracted PPs. These extracted PPs can be used for many medical and pharmaceutical purposes to utilize their therapeutic values effectively. Being hydrophilic and phenolic in nature, they can be extracted by various solvents, including methanol, acetone, acetonitrile, and ethanol. Among these solvents, methanol is found to be more efficient for the extraction of lower molecular weight PPs while aqueous acetone—for higher molecular weight PPs [15]. Different extraction techniques are utilized for PPs including maceration, heat-assisted, ultrasound-assisted extraction (UAE), microwave-assisted extraction (MAE), homogeniser-assisted extraction (HAE), and rapid solid–liquid dynamic extraction (RSLDE). Maceration is a simple and traditional method of extraction that is performed in glass containers at room temperature [16][17]. Heat-assisted extraction is carried out at a high temperature in glass containers with continuous mixing in a water bath or the incubator shaker, allowing unattended operation in a temperature-controlled environment. The use of thermal energy improves the efficiency of the extraction by disruption of cellular structures, the increment of cell membrane permeability, and breakdown of PPs–lipoprotein interactions, which cause enhancement of PPs solubility and mass transfer [18]. Continuous mixing for minutes or hours is required and the choice of extraction solvent in maceration and heat-assisted extraction depends on the chemical and physical properties of the targeted compound and extraction method. MAE is performed with a microwave extractor system that is equipped with a digital control system. Procedure time (1–25 min), stirring (250 rpm), and temperature (20–50 °C) are used. UAE is carried out in an ultrasound bath or probe and plant tissues are destroyed through ultrasonic waves, as they cause mechanical vibrations that lead to expansion and compression cycles during movement through the extraction medium and provoke the rise of temperature and negative pressure [19][20]. These mechanical and thermal effects cause the degradation of cell walls, the release of cell contents, greater penetration of solvent into plant material, the increment of mass transfer, and thus, the increase of PPs yield [21]. HAE is usually operated at high speed which requires homogenization and centrifugation in the presence of a solvent. The high-shear rate applied promotes the rapid rupture of the plant material, releasing the constituents into the extraction solvent [22]. Besides, RSLDE uses the Naviglio extractor generation in which a suitable solvent is used under the pressure gradient between the outside and the inside of a solid matrix containing extractable material, followed by a sudden restoration of the initial equilibrium conditions, induces forced extraction [23]. Recently, Yilmaz et al. [19] reported a study for the extraction of PPs using maceration, MAE, and UAE methods from Stevia rebaudiana Bertoni. In that study, MAE and UAE required less processing time and showed a higher yield as compared to maceration [19]. Galan et al. [24] carried out a comparison study between MAE and conventional health-assisted extraction; they stated that MAE possessed higher yield and antioxidant activity for PPs. Another comparison study among maceration, HAE, UAE, MAE, and RSLDE was conducted and revealed that better extraction was found with 100% methanol as an extraction solvent than methanol/water (50:50, v/v). The highest phenolic content was found with HAE, followed by UAE then MAE. In another similar study, da Rosa et al. [25] compared MAE, UAE, and maceration and reported that MAE is more efficient in yield with short extraction time, followed by UAE and maceration. Additionally, regarding in vitro antioxidant activity: ferric reducing antioxidant power was found highest with UAE in which water and methanol are used as a solvent. In contrast, oxygen radical absorbance capacity was found highest with HAE with 100% methanol as solvent extraction [26]. Jovanović et al. [27] stated a comparison of extraction techniques and compiled that both maceration and heat-assisted extraction are simple and traditional methods. However, the usage of high solvent in these techniques demands high cost and may lead to environmental problems, whereas extracted PPs yield is also low. On the other hand, UAE and MAE require less time and less solvent. Moreover, they show a higher yield with less environmental issues. From the above-mentioned data, it can be concluded that the selection of the right extraction technique is essential for wider and correct compound characterization. All of the extraction techniques promote the recovery of phenolic compounds but with different efficiencies. So, the use of non-conventional (other than maceration and heat-associated) extraction technologies is suggested.