Polyethylene (PE) is one the most used plastics worldwide for a wide range of applications due to its good mechanical and chemical resistance, low density, cost efficiency, ease of processability, non-reactivity, low toxicity, good electric insulation, and good functionality.

In recent times, polymers have been used in a wide range of industrial applications, such as packaging, electronics, and construction [1][2]. To better the performance of the aforementioned applications, polymers need to be more environmentally friendly, safe, and durable [3]. The utilization of polymers is encouraged due to good functionality, acceptable durability, and cost-efficiency; however, high flammability, and poor thermal properties are noticeable limitations for their applicability [4]. Most polymers are flammable and, by exposure to enough energy, they will leave a considerable amount of smoke and heat [5]. It is reported that annually about 5000 people in Europe and 4000 people in the United States are killed by fires. Furthermore, the economic loss of these fire accidents is estimated to be about 0.3% of the GDP [6]. Following the analysis conducted by the Geneva-based Aircraft Crashes Record Office (ACRO), it is possible to reduce the possibility of fire catastrophes and their subsequent fatalities by reducing the flammability of polymeric materials [6]. Therefore, related to the use of polymers, there are environmental, economic, and health issues that are considered as the driving forces to motivate the conduction of research and different studies on the flammability of polymers [7].

Polyolefins are a group of the most popular polymers in various applications [8]. One of the main polymers of this group is PE, with more than 100 million tons production per year, that is, 34% of the total plastic market, and is extensively used due to good mechanical and chemical resistance, low density, cost efficiency, ease of processability, non-reactivity, low toxicity, good electric insulation, and good functionality [9]. However, like other polymers, the concern about PE is its flammability in applications requiring good flame retardancy. Although the emissions from PE have low toxicity, it has a low limiting oxygen index (LOI) and drips during burning, which causes rapid flame spread [10].

Typically, physical or chemical modifications, as well as applying FRs, are recommended to reduce the flammability of PE products [11]. Flame retardancy of polymers increases by incorporation of FRs and is estimated to triplicate their survival time in case of fire [12]. FRs are necessary as they enhance the flammability of polymeric materials by delaying the fire and its spread [13]. The common commercial FRs used for PE systems are based on phosphorus, borate, inorganic hydroxides, silicon, and nitrogen and are introduced to polymer matrixes during processing [14]. Each of the FR approaches uses a different mechanism and their application is attributed to the polymer matrix and the intended usage. For example, regarding the inorganic hydroxides, they will reduce the burning rate by releasing water to decrease the temperature since decomposition occurs at higher temperatures. Although gas-phase reactions are important in controlling flames in PE systems, quenching FRs based on halogens are not recommended due to environmental concerns [15]. Moreover, intumescent flame retardants (IFRs) are of great importance and efficiency in restricting the fire by forming a swollen char and are applicable for polymeric materials [16]. Considering the high production and applicability of PE, the issue of its flammability is of great importance and hence, there is an urgent need to develop strategies that minimize the flammability of PE.

PEs are one of the most potential materials of value-adding in the case of accurate formulation modifications [17]. It is of great importance to know the grades of PE as their flame performance is correlated with their chemical structure (i.e., branching type) and FR formulations [17]. The structure and properties of PE main grades, including density, crystallinity, LOI, thermal conductivity, melting temperature, and molecular weight are summarized in Table 1.

3. The Role of Nanotechnology in Flame Retardancy of Polymer Nanocomposites

3.1. The Role of Nanomaterials in Improving Flame Retardancy of PE Systems

Szustakiewicz et al. investigated flame retardancy of HDPE/clay nanocomposites with MPP and APP FRs. They used two different types of organoclay: hydrophobic and hydrophilic. Based on the results of two flammability test methods (LOI and CCT), the simultaneous addition of organoclay and FRs to HDPE simultaneously results in a synergistic effect of flame retardancy. In this case, the LOI increases because of two factors, firstly, hydrophobic clay forms a reinforced structure that hinders the heat transfer of heat, and secondly, APP intumescent char formation. As a result, the combination of these two effects makes the material burning more slowly [30].

Chuang et al. also found that the incorporation of nano-dispersed layered silicate and low smoke non-halogen (LSNH) FRs to the EVA/HDPE polymer blend caused a synergistic effect on the flame retardancy and smoke suppressing. According to the results, during combustion, the HRR of the FR-EVA/LDPE-n nanocomposite is 40% lower than the FR-EVA/LDPE polymer blend. Furthermore, they investigated the effect of organoclay contents on the flammability of FR-EVA/LDPE-n. It was found that there is an optimum loading of organoclay (3 phr), where the nanocomposite has the highest performance in flame retardancy [31]. In another study by Yu et al., the effects of adding MWCNTs and Ni2O3 on the flame retardancy performance of LLDPE were investigated. The results of CCT show a synergistic effect of a combination of MWCNTs and Ni2O3 in improving the flame retardancy of LLDPE, such that nanocomposite containing 3 wt.% MWCNTs and 5 wt.% Ni2O3 shows 73% reduction in PHR rate compared to LLDPE and the yield of residual char is 13.7%. The improvement of flame retardancy of LLDPE by incorporating MWCNTs and Ni2O3 was attributed to the physical effect of MWCNTs (formation of a network like structure because of the good dispersion of MWCNTs), chemical effect of Ni2O3 (catalytic carbonization), and the combination of physical and chemical effect. Figure 1 schematically illustrates the aforementioned mechanisms [32]. 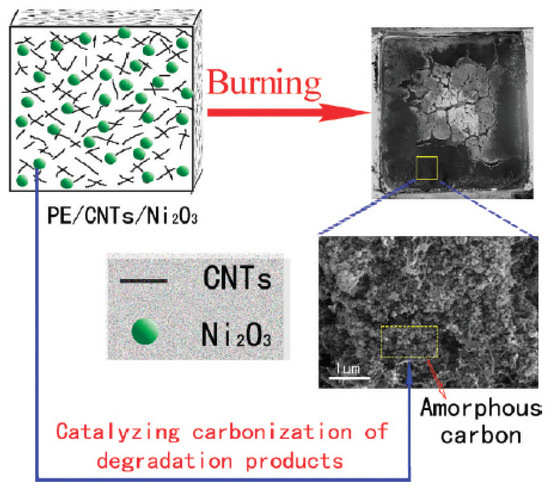 Figure 1. Schematic representation of the synergistic effect mechanism between Ni2O3 and MWCNTs on enhancing the flame retardancy of LLDPE, reprinted with permission from Ref. [32].

Han et al. applied different contents of well-exfoliated graphene nano-platelets to enhance flame retardancy of polyethylene/alumina trihydrate (PE/ATH) composites and showed the addition of 0.2 wt.% of GNP decreased the PHR by 18% of that of the PE/ATH composite. A possible explanation of this behavior is a char layer of GNPs acting as a heat shield and a barrier against mass transport. Images of the PE/ATH/GNPx (x, contents of GNP) after cone testing are represented in Figure 1.

Table 2 represents some results about the influence of nanomaterials on the flammability of PE nanocomposites.

Table 2. Effects of different types of nanomaterials on the flammability of PE.

A variety of methods are applied for the incorporation of nanomaterials into PE, depending on the nature of the nanomaterials [34]. These methods include in situ polymerization, solvent casting, and melt mixing, which will be elaborated in the following sections.

In this method, at first nanomaterials and monomers are mixed in a solvent with a proper shear rate, which obtains a stable suspension [35]. In this stage, some interfacial agents are added to enhance the stability of the mixture. Then, the obtained mixture is fed to the reactor where the processing conditions mostly are the same applied to the synthesis of the base polymer. When the polymerization is complete, the solvent is removed [36]. This method is used for a wide range of polymer nanocomposites.

This method is mostly used in cases that there is not enough dispersion of nanomaterials in the polymer [37]. In other words, the thermodynamic affinity between polymer and filler is not favorable for homogeneous dispersion. Therefore, the most important step of this method is the breaking of the agglomerates of nanomaterials, and ultra-sonication is the best method to achieve this goal. This process is especially suitable for the exfoliation of clay layers and thermosetting polymers [38][39]. To conserve dispersed/intercalated/exfoliated structure, some interfacial compatibilizers, such as maleic anhydride grafted polymers, are used.

Melt compounding is the most common method for the production of nanocomposites because of the simplicity and availability of equipment [40][41]. Depending on the amount of the product, an internal mixer and twin-screw extruder are used for processing. There are two major methods of feeding for melt compounding: direct and master-batch which the later method is more common. In the master-batch feeding method, first, a concentrated master-batch of filler is prepared and then is diluted in the base polymer [42]. To obtain a good dispersion of filler in polymer and improve compatibility among components, some grafted polymers are utilized [43]. The amount of shear rate, mixing time, temperature, and design of the screw profile can determine the final microstructure and properties of the nanocomposites [44][45].