β-glucans are complex polysaccharides that are found in several plants and foods, including mushrooms. β-glucans display an array of potentially therapeutic properties.

Today, β-glucans are widely marketed as biologically active compounds that have the potential to improve health [7]. Of therapeutic importance, β-glucans have potentially important metabolic and gastro-intestinal effects, modulating the gut microbiome, altering lipid and glucose metabolism, reducing cholesterol, leading to their investigation as potential therapies for metabolic syndrome, obesity and diet regulation, gastrointestinal conditions such as irritable bowel, and to reduce cardiovascular and diabetes risk. β-glucans also appear to have immune-modulating effects, leading to their investigation as adjuvant agents for solid cancers and haematological malignancies, for immune-mediated conditions, such as allergic rhinitis and respiratory tract infections, and to enhance wound healing. Two glucan isolates were licensed as drugs in Japan as an immune-adjuvant therapy for cancer in 1980 [8][9].

Consequently, β-glucans are also being tested for clinical efficacy in clinical trials for a variety of conditions, including inflammatory conditions, cardiometabolic diseases, obesity and cancer. In fact, over 200 clinical trials of β-glucans are completed or in progress, suggesting their diverse biological properties might have the significant therapeutic potential [10]. The US Food and Drug Administration passed a ruling in 1997, stating that oat bran—a major source of β-glucan—was to be registered as the first cholesterol-reducing food, and recommended a dose of 3 g/day of β-glucan, this can be provided by ≤40 g oat bran or ≤60 g oatmeal [11]. For the most part, β-glucans are marketed as “natural” food (as opposed to medicinal) products, frequently comprising a complex mixture of polysaccharides and even contaminants that can potentially contribute to varied effects and outcomes [12].

2. Discovery and Characterization of β-glucans

In their seminal work on the discovery of Properdin in the complement system, Pillemer and colleagues used a compound called Zymosan [13]. Zymosan is a crude mixture of yeast cell wall materials and was used as an immune stimulator [13]. Zymosan contains polysaccharide proteins, fats, and inorganic elements [14]. Zymosan was also used for a range of applications including the promotion of survival after ionizing radiation, increasing resistance to several biological infections, inhibition of dietary-induced hypercholesterolemia and inhibition of tumour development [14][15][16][17][18].

Zymosan had an abundance of adverse side effects, including pyrexia, anaemia, pulmonary hyperplasia, and microemboli, and so in 1961 Riggi and Diluzio identified the component of Zymosan responsible for reticuloendothelial stimulation (RES) [19]. Their work determined that this stimulatory agent was a polysaccharide from the cell wall of yeast or Saccharomyces cerevisiae. This finding was contradictory to previous reports that suggested a lipid mixture in Zymosan was the active ingredient, [15][20]. They concluded that there was a 1,3 β-type linkage that was uniquely characteristic to this polysaccharide or glucan. This linkage is required for the stimulation of cells or RES. This study initiated the era of glucan research [19]. In 1969, Chihara et al. isolated 1,3 1,6 β-glucans form the mushroom Lentinus edodes. They demonstrated its ability to inhibit sarcoma in allogenic mice [20]. Since then, β-glucans has been isolated from an abundance of sources, most recently a 1,3 1,6 extract has been isolated from bananas [21]. Two glucan isolates are now licensed drugs in Japan as an immune-adjuvant therapy for cancer since 1980 [8][9].

Structurally, β-glucans are comprised of glucose units linked together by several different types of beta-glycosidic linkages (Figure 1). In the basic form, the molecule is a polymer of monosaccharide residues [0]. β-glucans are composed of β-D-glucose monomer units, which are held together by glycosidic linkages at differing positions (1,3), (1,4) or (1,6). This structure can be either branched or unbranched [22]. The monosaccharide units interconnect at several points to form a wide variety of different branched and linear structures [23]. The β-glucans source will determine if the molecule has branched structures and to what extent. The fine structure of β-glucans can vary in meaningful ways that modify its effects and mechanisms of action. A variance will occur between glycosidic linkages, molecular weight, branching, degree of polymerization, and solubility. β-glucans from different sources will have different effects or functions [24].

β-glucans can be divided into two sub-groups, namely cereal and non-cereal (Figure 2). Cereal or grain derived β-glucans usually have 1,3 1,4 glycosidic linkages without any 1,6 bonds or branching [25][26][27]. They are fibrous structures found in aleurone (proteins stored as granules in the cells of plant seeds), in the sub-aleurone layer and the cell wall of endospores [28]. Cereals include oat, barley, wheat and rice [28]. 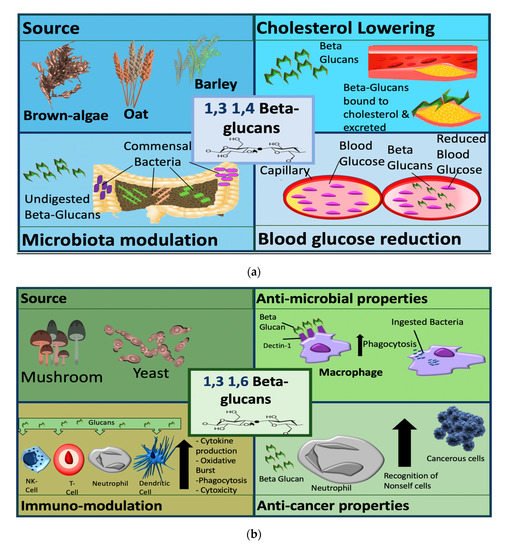 Regardless of source cereal β-glucans share similar structures, some differences include variation in 1,3 1,4 linkage ratio, molecular size, and some have large cellulose structures [29][30]. β-glucan content also varies among cereal sources—there is higher glucan content in barley then oats, the least is found in rice and wheat [31].

Non-cereal β-glucans are fibrous structures found in yeast, fungi, bacteria, and algae [32]. β-glucans originating from yeast have linear (1,3) backbones with long chains of 1,6 branching [26][33][34]. Unlike grain β-glucans, fungal β-glucans differ between species concerning the degree of branching and distribution [0]. Curdlan, a glucan isolated from Agrobacterium, contains no side branching, just a β-D glucan backbone [35]. The solubility of the molecule is reliant on 1,3 linkages. β-glucans are classified as soluble dietary fibre as the beta configuration is not digestible by enzymes in the human gastrointestinal (GI)-tract [36]. They are further classified pharmacologically as biological response modifiers (BRMs) as they influence the immune system counterparts [37]. For cereal-based β-glucan at least, higher molecular weight β-glucans appear to be more effective than lower weight molecules [38]. With this level of variance, it is not surprising that there is a range of diverse applications of β-glucans in clinical trials ranging from the alleviation of respiratory illnesses to improving fatigue and weight loss.

The mechanism of action of β-glucans can be broadly divided into two major areas, namely metabolic/GI effects and immune-modulatory effects. The molecular and structural characteristics will determine functional effects [39][40][41]. β-glucans display diverse mechanisms of action and have a defined structure-activity relationship [42]. The 1,3 backbone is a necessary characteristic for β-glucan activity [43][44]. The degree and the specific profile of biological activity appears to be related to specific β-glucans structural characteristics. First, side-chain frequency and length are important, with a higher degree of branching associated with greater biological activity [45]. It remains unclear precisely how differences in structure modulate the activity of b-glucans [46], sidechains length and frequency play a crucial role in the immunomodulatory activity [46][47].

β-glucans are classified by their source, into cereal and non-cereal β-glucans (Figure 2). Cereal β-glucans, which are 1,3 and 1,4 linked, mainly display metabolic activities, such as the ability to lower cholesterol and blood glucose and have been explored in clinical studies to target metabolic conditions.  These 1,3 and 1,4 linked glucans appear to be recognized as dietary fibers after ingestion and elicit their metabolic effects via this mechanism. Non-cereal (predominantly fungal and yeast) β-glucans have a more pronounced immunomodulatory functions and are the focus of immunomodulation and anti-cancer studies. Fungal and yeast b-glucans have a 1,3 and 1,6 linkage structure, and are recognized by some receptors including dectin 1, complement receptor 3 (CR3) and toll like receptors (TLRs) [48][49][50][51].

The pathways activated by b-glucans are not fully understood, but β-glucans appear to be recognized as pathogen associated molecular patterns (PAMPs) and they modulate immune cell function via this mechanism. The different mechanisms of β-glucans dependent on structure are categorized by source in Figure 2.

β-glucans are natural molecules that have significant therapeutic promise, particularly as metabolic and immune-modulatory agents  [200]. Enthusiasm for their therapeutic potential is reflected in the high number of clinical trials (202) of β-glucans that have been completed or are in progress. However, concerns around deficits in the understanding of the complex relationship between β-glucans structure and their effect profile, together with heterogeneity in the approach to clinical translation, and variations in the approaches to extracting and purifying these agents, has hampered the search for clinical indications for β-glucans. A more rigorous approach, carefully defining optimal isolation and purification procedures from key sources, then characterizing the relationship between specific variations in β-glucans branching structure, molecular weight, and cereal/microbial source and their effect profile, may be the best approach to ultimately realize the therapeutic promise of these intriguing compounds. Thus, facilitating a greater understanding of the mechanisms of action of β-glucans. This could lead to targeting a more precise clinical objective as the mechanism of action would be established. However, notwithstanding this ruling, significant challenges exist to the successful clinical testing and translation of β-glucans as a therapy. Our incomplete understanding of the diverse mechanisms of action of β-glucans constitutes a key knowledge gap. A second challenge relates to the important differences that appear to exist in the effects of apparently similar β-glucan preparations, which may be due to differences in sources and extraction procedures, another poorly understood issue.