G-protein-coupled receptors (GPCRs), which make up the largest superfamily of human membrane proteins, play pivotal roles in mediating intracellular signaling and inducing cell proliferation, cell growth, and cell motility through the association and subsequent dissociation of G-proteins in response to external stimuli.

G-protein-coupled receptors (GPCRs), which make up the largest superfamily of human membrane proteins, play pivotal roles in mediating intracellular signaling and inducing cell proliferation, cell growth, and cell motility through the association and subsequent dissociation of G-proteins in response to external stimuli (Figure 1) [1][2]. Many clinical studies have revealed that abnormal functions of GPCRs are highly related to a variety of human diseases and affect the patient survival rate [3][4][5]. Therefore, GPCRs are crucial drug targets to treat patients with various diseases, and their targeting drugs represent more than 30 percent of all US Food and Drug Administration (FDA)-approved drugs [6][7][8]. Annual sales of these drugs have increased to about USD 180 billion in 2018 [9]. 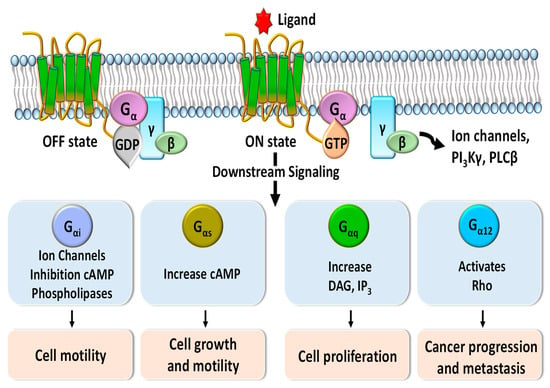 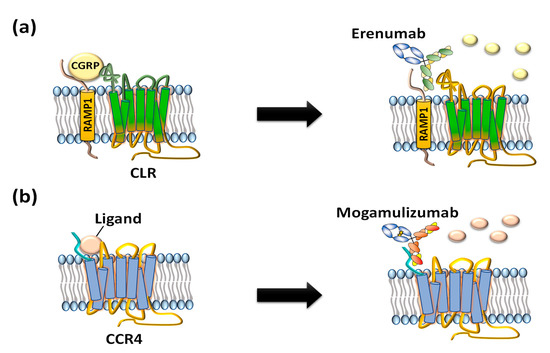 Figure 2. US FDA-approved anti-GPCR antibodies erenumab and mogamulizumab. (a) Erenumab is an antagonistic monoclonal antibody against calcitonin gene-related peptide receptor (CGRPR) consisting of calcitonin receptor-like receptor (CLR) and receptor activity-modifying protein 1 (RAMP1) for treatment of chronic migraine. (b) Mogamulizumab is an antibody against chemokine receptor 4 (CCR4) for treatment of T-cell leukemia by inactivating the GPCR and clearance of target cells by enhanced antibody-dependent cell-mediated cytotoxicity (ADCC).

Generally, amenable techniques to isolate therapeutic human antibodies include (1) humanization of candidate antibodies followed by the selection of hybridoma cells derived from immunized animals; (2) screening of the human naïve antibody library displayed on the surface of bacteriophages, bacteria, or yeast, which take advantage of a physical linkage between genotype and phenotype; and (3) hybridoma selection after immunizing an antigen into humanized transgenic animals, referred to as XenoMouseTM, which contains the genes for variable regions of the heavy (VH) and light (VL) chains of the human antibody repertoire [13]. 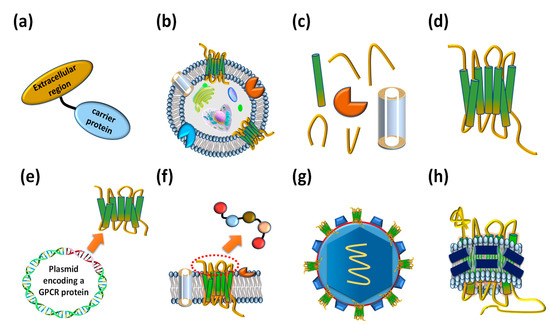 Erenumab is an antibody developed to treat patients with chronic migraine. It regulates the function of calcitonin receptor-like receptor (CLR), interacting with the receptor activity-modifying protein (RAMP) family. The single transmembrane domain has selectivity for three types of ligands: calcitonin gene-related peptide (CGRP), adrenomedullin 1, and adrenomedullin 2 [20]. The calcitonin gene-related peptide receptor (CGRPR), comprising CLR and RAMP1, is mainly distributed in the peripheral and central nervous systems.

Moreover, it is closely related to migraine through vasodilation following Gαs protein release and the activation of adenylyl cyclase [21][22]. Based on the finding that the CGRP binding site spans the extracellular regions of CLR and RAMP1 [23], a heterodimeric Fc (fragment crystallizable) fusion protein consisting of an ectodomain of RAMP and an N-terminal extracellular region of CLR was designed as an antigen to isolate CGRPR antagonistic antibodies (Figure 4a). In addition, the prepared heterodimeric Fc fusion was immunized into XenoMouse to generate erenumab, followed by hybridoma screening [24][25] (Figure 4b). Erenumab showed a high binding affinity to CGRPR (KD = 56 pM) and excellent inhibition of cAMP production (IC50 = 2.3 nM) [26]. Additionally, structural analysis of the CGRPR-CGRP complex confirmed that erenumab directly blocks the conformation of CGRP into CGRPR [27]. In the phase III clinical trial, patients treated with 70 mg and 140 mg of erenumab once a month for at least 6 months showed 43.3% and 50% reductions of number of days of migraine [28], respectively, and these efficacy results enabled the antibody to be the first anti-GPCR antibody approved by the US FDA in May 2018 and by the European Medicines Agency (EMA) in July 2018.

Figure 4. Schematic diagrams of antigen preparation and overall procedure for discovery of US FDA-approved anti-GPCR antibody. (a) A heterodimer CGRPR Fc protein prepared by Fc fusion constructs of N-terminal extracellular regions of CLR and ectodomain of RAMP1. (b) Immunization of heterodimeric CGRPR Fc proteins into XenoMouse hybridoma selection to isolate erenumab. (c) The N-terminal region of CCR4 (28 amino acids: N2-C29) fused with keyhole limpet hemocyanin (KLH). (d) Injection of the N-terminal region of CCR4-KLH into BALB/c mice and hybridoma selection, humanization, and defucosylation of N-inked glycans of Fc to generate mogamulizumab.

Mogamulizumab is a humanized monoclonal antibody targeting chemokine receptor 4 (CCR4) with a glyco-engineered Fc region to enhance the antibody-dependent cellular cytotoxicity (ADCC) for the clearance of adult t-cell leukemia (ATL). The protein CCR4 is overexpressed on the surface of FOXP3+ regulatory T (Treg) cells of ATL patients and is involved in the evasion of immune surveillance against tumors [29][30]. To isolate anti-CCR4 antibodies, extracellular partial N-terminal peptide (28 amino acids: N2-C29) was fused to a carrier protein, keyhole limpet hemocyanin (KLH) (Figure 4c), and injected into mice for the screening of antigen-specific antibodies (Figure 4d) [31]. After humanization of the candidate antibodies, glycol engineering was performed to defucosylate the N-linked glycan of Fc to enhance FcγIIIa binding and Natural Killer (NK) cell-mediated ADCC activity [32][33][34][35]. The resulting mogamulizumab (KW-0761) exhibited significant efficacy in 50% of ATL patients treated in clinical trials, leading to successful commercialization in 2012 in Japan and in 2019 in the US for the treatment of mycosis fungoides (MF) and Sézary syndrome (SS) [12][36].

The use of GPCR-expressing cells (Figure 3b) or their membrane fractions as antigens containing integral and associated proteins (Figure 3c) has been limited due to difficulty in overexpressing a target GPCR on the cell surface due to the presence of numerous other membrane components. In addition, a very advanced handling technique is necessary to apply the fragile whole cells as antigens for repeated rounds of antibody screening. Alternatively, the membrane fraction from cells displaying a target GPCR has been used as a type of antigen. The biggest advantage of using GPCR-expressing cells or membrane fractions is their native conformation that allows for the isolation of a desired anti-GPCR antibody capable of recognizing the native structure of GPCR compared to using other GPCR mimetic antigens.

Glutazumab is an agonist antibody targeting GLP1R for the treatment of type 2 diabetes resulting from an abnormal cellular response to insulin. It was developed by hybridoma selection from mice that were immunized with GLP1R-expressing mammalian cells, humanization, and genetic fusion of the GLP1 (29 amino acids: H7-G35), a ligand of GLP1R, at the N-terminus of the variable light chain of IgG [39][46]. Glutazumab was efficacious in suppressing the interaction between GLP-1 and GLP1R and showed significant efficacy in suppressing glucagon secretion in a human phase II clinical trial in Australia and New Zealand .

Leronlimab (Pro 140) is a humanized monoclonal antibody targeting CCR5, which is expressed on the surface of T lymphocytes and is essential for the fusion of HIV with immune cells. Anti-CCR5 antibodies were isolated by immunizing mice with CCR5-expressing mammalian cells, and humanization of the resulting antibodies enabled the development of leronlimab (Pro 140) [43]. The antibody inhibits HIV infection pathways by selectively binding to the N-terminus and extracellular loop 2 of CCR5, and a human phase III clinical trial is ongoing [47].