Subjects: Others
View times: 9
Submitted by:

Tendon disorders are medical conditions, such as ruptures and overuse injuries, and inflammatory and degenerative disorders, such as tendinopathies.

In the United States, 33 million musculoskeletal injuries have been reported per year, 50% involving tendon and ligament injuries. Tendon injuries, however, do not only occur in physically active adults and adolescents (especially males), but they also appear among the sedentary population (who conduct moderate physical activity). Next to sports, several intrinsic factors, including body weight, nutrition, and age, may be responsible for tendon injuries. Moreover, genetic diseases that affect connective tissue could have an impact on tendon/ligament. Tendinopathies could be accompanied by inflammation and pain (as tendonitis, peri-tendonitis, and retrocalcaneobursitis), whereas tendinosis and ruptures are caused by intertendinous degeneration without the evidence of inflammatory processes [1]. The incidence of Achilles tendon ruptures (one of the most frequent tendons injured), is up to 1%, typically in 30- to 50-year-old men [2].

Chronic, non-healing tendon injuries frequently require surgical treatment, and despite recent advancements in orthopedic surgery, many common tendon repair techniques yield less than optimal results [3][4][5]. Moreover, healed tendons tend to form scar tissue with different mechanical properties than healthy tendons and are prone to reinjury. Furthermore, at the tendon–bone interface, many common tools used in surgery, such as suture anchors, cannot regenerate the enthesitis, resulting in a high incidence of re-rupture [6][7]. This is due to the peculiarity of the tendon-to-bone interface (TBI), a hybrid complex tissue that serves as shock-absorber of transmission forces between the tendon and the bone. Therefore, alternative surgical procedures should enhance proper tendon healing. This review will focus on tendon structures and their junctions to bones or muscles, the injuries, common treatments to restore limb functions, and the recent strategies of tissue engineering based on three-dimensional (3D) scaffolds and biological augmentation.

2. New Strategies for the Treatment of Injuries: Tissue Engineering

Recently, many efforts have been attempted to find innovative approaches in tendon injuries. Tissue engineering is a multidisciplinary approach for creating a viable tissue by applying the principles and the methods of engineering and life sciences, with the ultimate aim to induce repair, and replacement or regeneration of injured tissue. Tissue engineering involves the use of cells combined to scaffolds and biologics (biological active molecules, mainly hemoderivatives and growth factors). Tissue engineered substitutes are the promising tissue replacement to overcome the limitations related to the traditional approaches although, to date, translation in clinic does not yet occur. However, in this perspective, cell-based therapy supported by scaffolds and cellular or acellular scaffolds have been proposed, both to enhance tendon regeneration and to control growth factor release to achieve tendon repair with minimal scar [8][9][10].

Cell-based therapy is based on direct injection of cells in the damage site: these are able to induce the in-situ production of ECM, effective in the healing process. In particular, TSPCs possess the ability to differentiate into tenocytes and into several non-tendon cell types, such as chondrocytes and osteocytes, demonstrating a tremendous potential to improve the healing of damaged tendons [9][11].

Specifically, it has been demonstrated that TSPCs are able to promote the tendon repair in a murine model of patellar tendon defect model, by increasing collagen production and by restoring collagen 3D structure, thus recovering tendon elasticity [12].

Similarly, it was stated that autologous tenocytes (a mixture of tenocytes and TSPCs) improve the histological outcomes and increase the tendon collagen content and its tensile strength, by healing chronic Achilles tendinopathy in a rabbit model [13].

Although many studies suggest that these cell therapy treatments increase the healing of the tendon injury, the translation in clinical practice needs to overcome some problems [9]. The major one is the identification of the suitable cell source and the appropriate cell number, both effective at recovering the tendon injuries. These are crucial, considering that, currently, no standard has been identified [9][14]. Along with this, the donor age seems to be another key issue [9][15].

The standardization of the therapeutic approach is a critical point, and this greatly influences the final outcome. Patient age, delivery techniques, and cell stemness, and their viability after injection or implant, are variables that should be considered. Furthermore, a carrier should be considered to prevent cell membrane breaking during the direct injection, and to facilitate cell survival and activities after implant [16]. Stem cell proliferation after implantation is an additional crucial aspect and the possible uncontrolled proliferation causes a certain degree of caution in the clinical translation. Although the use of TSPCs to improve tendon repair is an attractive option to treat diseases, such as tendinopathies, their potential clinical application is still an emerging field, and further research is required to establish a solid standard procedure to their administration.

The scaffolds, three-dimensional (3D) constructs considered the basis of tissue engineering [17][18], seem to be suitable to restore tendon injuries since they are able to recreate the spatial organization of the original tissue, to allow easier adhesion, survival, migration, proliferation, and differentiation of native cells, or seeded cells [18][19][20][21].

Resorbable scaffolds have been developed to overcome the problems arising from permanent implants and the rate of reabsorption should be planned considering the type of tissue involved. Scaffold degradation should be relatively slow to support the mechanical load until the regeneration of the new tissue. In the first phase of the repair process, the scaffold should protect the cells and the new tissue from high strains, and should allow gradual exposure to the loads in the later stages. Ideally, the system should degrade at the same speed of regeneration of the new tissue, and the degradation products should be biocompatible, without the onset of chronic inflammation or unwanted biological responses [22][23]. In particular, immune response should be negligible to prevent severe inflammatory reactions that delay the healing or cause a rejection [20][24].

Different (bio)materials have been proposed to achieve the tendon mechanical properties [8][20][24] and to resemble the tendon architecture. Porosity and pore size are key points, since cell penetration into the scaffolds and parallelly adequate nutrient diffusion should be assured. Moreover, scaffold architecture is crucial and influences the fate and the function of the implanted cells, for this reason, 3D constructs able to mimic the in vivo cell microenvironment seems critical [24].

Furthermore, during the design and the development of scaffolds, the manufacturing technology and the implant technique should be carefully evaluated to render them clinically and commercially available. Process scale-up, cost of production, and storage should be considered [20][21][22][24]. Among the various manufacturing technologies, electrospinning, soft lithography, and 3D printing have gained interest in the scientific community.

Electrospinning is a method that allows the generation of nanofibrous porous scaffolds using a high voltage electric field. It is a simple, versatile, flexible, and cost-effective method to spin polymeric materials to generate ultra-thin fibers with diameters in the nanometric or micrometric range [25][26].

The basic experimental set up for electrospinning includes (Figure 1) a syringe, a spinneret (usually a needle or a capillary tube), a syringe pump, a high voltage power supply, a collector, generally planar or rotary. 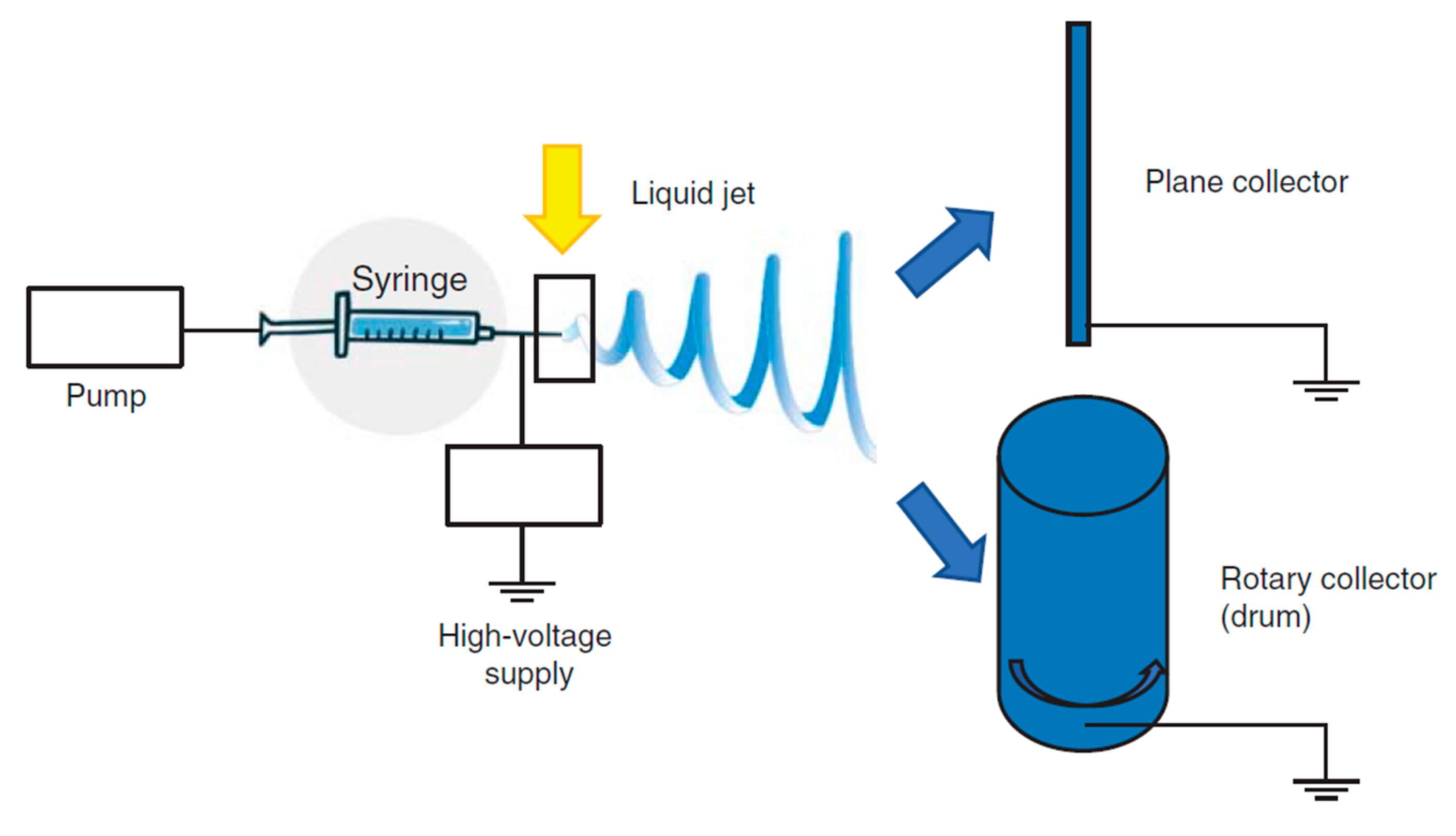 The polymer solution is pumped through the syringe and it forms a droplet on the needle tip. The high voltage forces the droplet by adopting a conical shape, called “Taylor cone”, and a thin liquid jet forms as soon as the electrical field strength exceeds the solution surface tension. The liquid jet travels in spinning motions to the collector, simultaneously the solvent evaporates and the fiber is deposited onto the collector. Depending on the collector shape, such as the static or the rotating collectors, flat sheets or cylindrical structure are obtained with a great surface to volume ratio and a great porosity [25][27]. The mechanical properties are a key point and they are tuned by chemical composition and scaffold morphology (nanofiber dimension and alignment) [26][28][29][30][31] to form a 3D structure resembling tendon ECM. Nanofiber alignment obtained using a drum [24][32][33] better simulates the collagen network and this seems to favor an adequate environment for cell homing and proliferation and ECM synthesis. Morphology, combined with the high surface area to volume ratio, and mechanical properties, allow cells to maintain their phenotype and native orientation [25][34]. Moreover nanofibrous scaffolds could be easily loaded with drugs capable to enhance cell proliferation or to prevent/treat infections [35][36][37].

Aligned nanofibers based on Carbothane™ (a medical grade polyurethane) and reinforced with different percentages of multi-walled carbon nanotubes (0.06%, 0.33%, and 0.66%) demonstrated to possess better mechanical properties than random ones. Moreover, mouse embryonic fibroblasts (NIH 3T3) adhesion, and proliferation were assessed [38]. Analogously aligned fibers based on blends of poly (l-lactic acid), polyethylene oxide, and loaded with Trichostatin A, evidenced the capability to restore structural and mechanical properties of Achilles tendon in an in vivo preclinical model [39].

Soft lithography is an innovative strategy based on printing and molding and it represents a convenient, effective, and low-cost method for the manufacturing of micro- and nanostructures, such as scaffolds or microengineered hydrogels [40][41][42]. In soft lithography, an elastomeric stamp, with molded relief structures on its surface, ranging from 30 nm to 100 nm, is used to generate a 3D structure that reproduce the ECM [43][44][45][46].

The elastomeric mold is fundamental in soft lithography and it is prepared by cast molding using elastomers, such as poly(dimethylsiloxane) (PDMS) or silicone rubbers, polyurethanes, and polymides. A prepolymer of the elastomer is poured over a master having relief structures on its surface, then cured and peeled off (Figure 2). The elastomers are preferentially used because they make a conformal contact with large surfaces and they are also released more easily from rigid masters or structures that are being molded [43][44][45][46][47][48][49]. 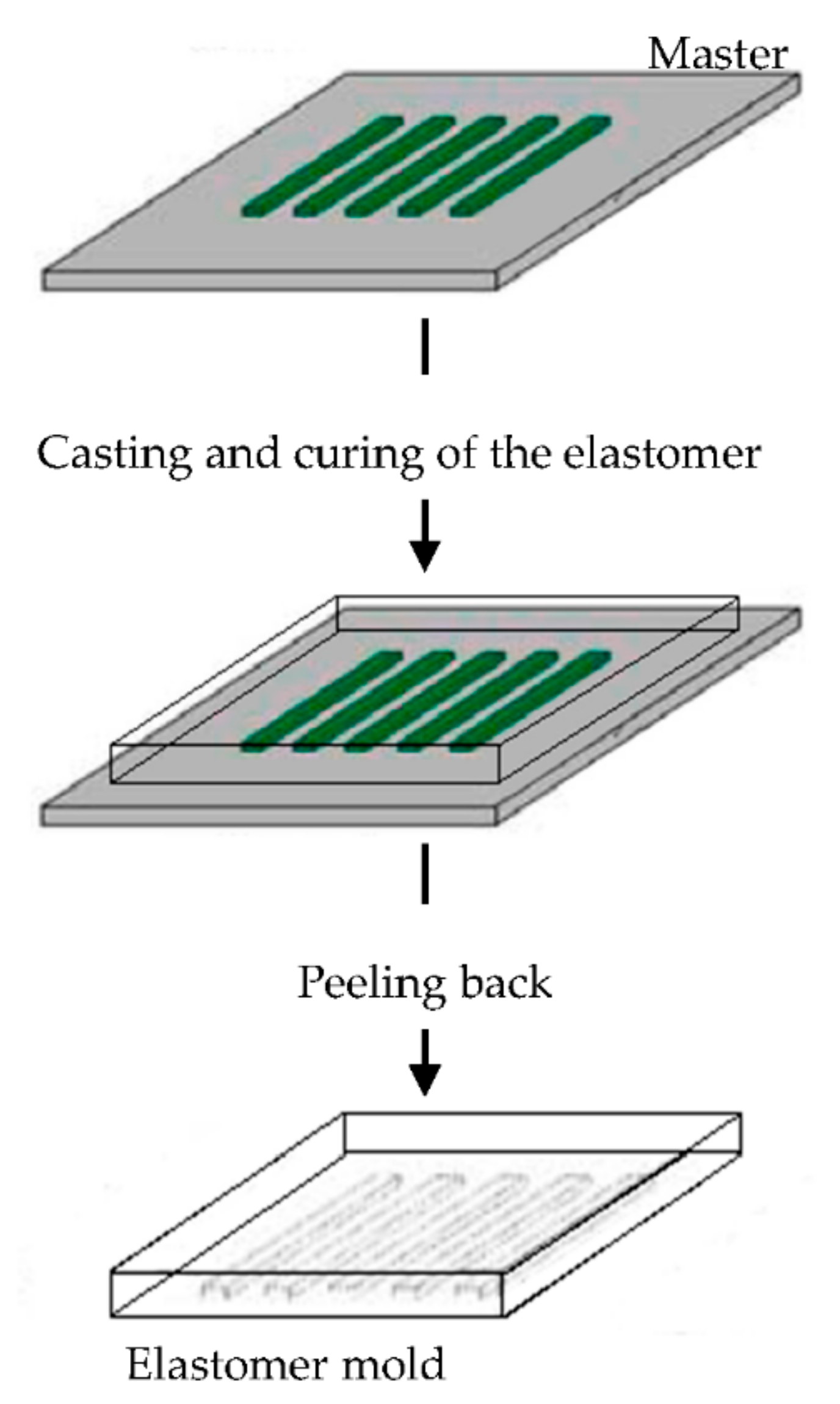 Imprinted substrates with the same size range as those found in tendon has been used to investigate the relationship between the substrate topography, the tenocyte behavior, and their phenotype stability. Groove with a smaller wide than that of tenocytes promoted cell alignment, elongation, and support phenotype stability. Moreover, tenocytes with phenotype loss regained expression of tenogenic markers [50].

μCP (Figure 3a) offers the possibility to engineer the surface properties at a molecular level [51][52]. Self-assembled monolayers (SAMs) of alkanethiols on a substrate coated with a metal, such as gold (Au), copper (Cu), silver (Ag), platinum (Pt) or palladium (Pd), form microstructures of different materials [45], and they are easily prepared by physical vapor deposition, such as thermal or electron beam evaporation [44][45]. Three-dimensional (3D) printing is a versatile technique and scaffolds with defined shapes, controlled chemistry, and interconnected porous structures, able to mimic the ECM properties, can be manufactured [54][55][56][57][58][59].

The equipment is based on a regular inkjet print head that deposits a binder material onto a powder bed layer-by-layer [54][55]. Fused deposition modeling (FDM) coupled 3D printing has been recently developed, and in this, a fused filament is used as ink. Almost all types of materials, such as polymeric and composite materials (ceramic and metallic based), have been used [60][61].

The 3D printable models are generally created with a computer-aided design (CAD) package, via a 3D scanner, or by a plain digital camera and photogrammetry software, and these methods allow to realize complex 3D structure with highly organized hierarchical organization. The 3D scaffolds based on polycaprolactone (PCL) have been built to mimic tendon hierarchical structure in fiber to fascicle, organization, allowing the attachment and alignment of the human tenocytes in vitro [62]. Moreover reinforced geometry have been obtained, as in the case of acrylonitrile butadiene styrene matrices (ABS) in collagen scaffold, without changing scaffold bioactivity [63].