Tissue engineering has been an inveterate area in the field of regenerative medicine for several decades. However, there remains limitations to engineer and regenerate tissues. Targeted therapies using cell-encapsulated hydrogels, such as mesenchymal stem cells (MSCs), are capable of reducing inflammation and increasing the regenerative potential in several tissues. In addition, the use of MSC-derived nano-scale secretions (i.e., exosomes) has been promising. Exosomes originate from the multivesicular division of cells and have high therapeutic potential, yet neither self-replicate nor cause auto-immune reactions to the host. To maintain their biological activity and allow a controlled release, these paracrine factors can be encapsulated in biomaterials. Among the different types of biomaterials in which exosome infusion is exploited, hydrogels have proven to be the most user-friendly, economical, and accessible material.

Bone regeneration for critical size defects is challenging, and even the most commonly used approaches in bone reconstruction, such as autologous and allogenic bone grafts, do not meet all the requirements of a bioactive material [1]. For autologous grafts, the quantity of the harvested bone tissue is limited, and the procedure is sometimes associated with increased donor site morbidity [1]. Failures due to mechanical instability and immunological rejection after the surgery paved the way for the development of alternative techniques for bone regeneration and defect repair [1]. Tissue engineering deals with the combined application of principles of life sciences and engineering towards understanding the structural and functional relationship in physiological and pathological tissues, involving bioactive materials [2]. A biomaterial can be described as any natural or synthetic substance or combination of substances that, when applied intimately into a functional system, autonomously replaces and restores the tissues of the body [3].

This multidisciplinary science uses the properties of a porous biocompatible and biodegradable material in the form of two dimensional or three-dimensional scaffold or template upon which the cells are seeded to promote growth in the tissue microenvironment [2]. Biomaterials either act as an in vitro template to aid in tissue engineering, with adequate cell–cell interaction and growth factors, or as an aid in transplanting the regenerated tissue in vivo to integrate structurally and functionally with the system [2]. Biomaterials commonly encountered in tissue engineering comprise of natural and synthetic polymers, and ceramics [2]. Three-dimensional hydrophilic polymers, such as hydrogels, have emerged as a bioactive scaffold material in the recent past, which are commonly used in drug delivery and cell encapsulation [4].

Cell-encapsulated hydrogels demonstrate prolonged fundamental and operational consistency and are widely applied in regenerative therapy [4]. The developments in cell-encapsulated hydrogel therapies have been improved by the heightened ease of using mesenchymal stem cells (MSCs) with them [4]. When a combination of stem cells and hydrogels are used, certain considerations are necessary. For instance, when MSCs are used in three-dimensional (3D) microenvironments, their differentiation efficiency into osteocytes, hepatocytes, or adipocytes is increased as compared to two-dimensional (2D) cultures [4]. MSCs also have shown enhanced differentiation capacity when cultured in proximity to other cells, such as hematopoietic stem cells (HSCs) and human umbilical vein endothelial cells (HUVECs) [4]. The cell encapsulation method is also reportedly dependent on the shape and size of the vehicle that delivers the MSCs [4]. The 3D environment, whether it is a hydrogel or bioprinted microfluid droplets, is required to be tailored to the target tissue for optimal tissue regeneration [4].

In this regard, the MSCs’ secretions have gained special attention as a regenerative tool compared to other cell-based therapies [5]. Initially identified in the 1960s, MSCs were first described as spindle-shaped cells originating from bone marrow that could regulate the quiescence and self-renewal of hematopoietic stem cells through the release of paracrine factors [6]. These cells are rare, heterogenous, and, in addition to bone marrow, have been successfully isolated from placenta, amniotic fluid (AF), umbilical cord blood (CB), Wharton’s jelly (WJ), and adipose tissue (AD) [7]. MSCs are easy to isolate from adult tissues, have a large capacity for ex vivo expansion, and have proven to be efficiently therapeutic in many diseases [7].

The International Society for Cellular Therapy has released the three minimal requirements to define multipotent MSCs: first, MSCs being plastic-adherent; second, expressing CD105, CD73, and CD90 while not expressing CD45, CD34, CD14 or CD11b, CD79α or CD19, and HLA-DR surface molecules; and third, having differentiation capacity into osteoblasts, adipocytes, and chondroblasts in vitro [7][8][9].

Treating sites of injury using MSCs has its own disadvantages. An estimated more than 99% of these cells get trapped in the spleen, lungs, and liver [10][11], and those that do approach the targeted tissue have a low survival time and are predisposed to cause thrombosis, fever, and tumors [12]. An alternative approach would be to consider the paracrine mechanisms of MSCs, especially the nanometer vesicles, exosomes, as the source of biomaterials for tissue repair (Figures 3A and 4) [12]. Recent studies have identified MSC exosomes as the mediator in carrying the restorative agents [10]. In addition to lowering the potential risks of cell-based therapy, processing, and storage conditions, exosomes are less sensitive than MSCs [13]. Exosomes will not self-replicate and consequently would not cause tumor formation [13].

Inducing hard tissue regeneration with a controlled release of drugs requires the presence of suitable cells as the foundation [14]. Bone regeneration is based on three key factors: stem cells, scaffolds, and growth factors [15]. Figure 1 depicts the cascade of events for healing of a fracture and consists of a complex physical process for delivering drugs and biomaterials [14]. Amongst the hard tissues, regeneration of cartilage remains challenging due to its avascular nature [16]. Given the high incidence of age-related diseases, such as osteoarthritis and injuries, it becomes imperative to look for alternative regenerative procedures [16].

Scaffolds and grafts have been used for ages for bone regeneration. Especially for hard tissue repair, artificial grafts and scaffolds offer the advantage of having less morbidity as there is no need for secondary surgery or donors. They are also cheaper and customizable to the required needs. There have been numerous advances to inculcate their inductive nature by fabrication of hybrid biomaterials with multipotential cells and their released factors. As depicted in Table 1, each biomaterial releases its secretory content at a different rate, and hence has a different potential clinical use. 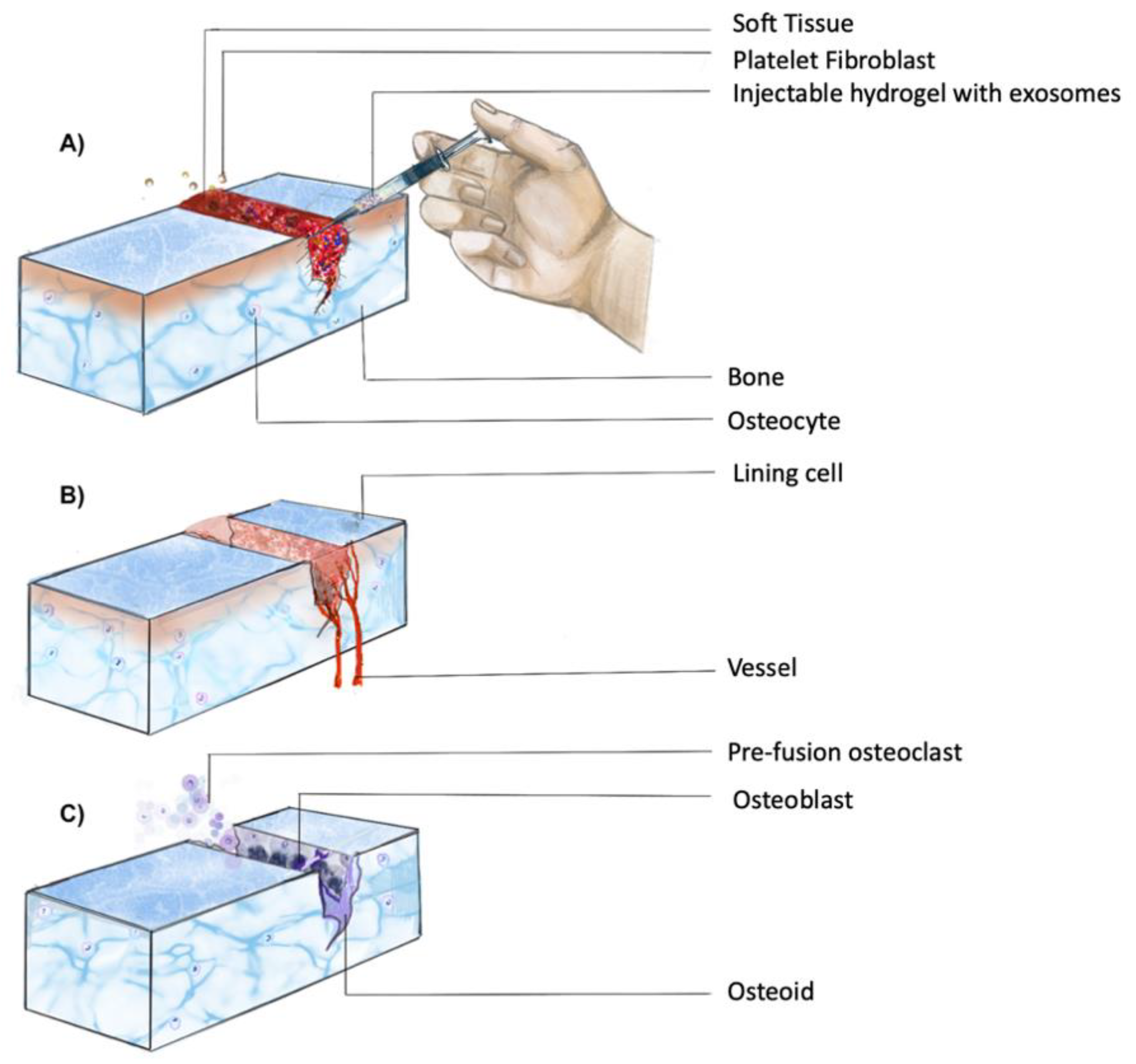 Figure 1. Temporal progression of fracture healing. Healing of a fracture involves a complex series of processes, which can be broadly divided into three phases: (A) inflammatory phase; (B) soft callus formation; (C) mineralization of callus and bone remodeling (adapted from Upadhyay et al. [17]).

Exosome-integrated scaffolds helped in restoring the mitochondrial function of degrading cartilage in an osteoarthritic cell model. Chen et al. identified the proteins associated with degrading mitochondrial function through protein enrichment analysis, which were less expressed in treated cells, leading to the rescue from osteoarthritic degradation [20]. Additionally, through transwell migration assays, it was found that the MA matrix with exosomes and ECM proteins had the maximum influence on chondrocyte migration [20].

Table 1 lists the studies that had tested additional parent cell types and combinations of assisted matrices with hydrogel compositions. One of the most commonly used compositions is PLGA, which is applied as a biocompatible scaffold for tissue regeneration. The challenge with PLGA is its lack of ability for slow-releasing surface modification. Such a feature becomes essential while timing the delivery of the exosomes or bioactive molecules to coincide with the natural healing and regenerative process. To overcome this issue, the release profile of the PLGA polymeric scaffolds was assessed by combining it with polydopamine (pDA), a mussel-inspired biomaterial that allows higher adhesions [18]. The exosome burst release from PLGA/pDA was recorded to be significantly slower (8 days) than the PLGA samples (4 days) [18]. In another study, Yang et al. found better release kinetics with 71.2% of exosomes being released over 14 days using hydroxyapatite (HAP) and hyaluronic acid–alginate gel (HA–ALG) hydrogels [23].

Each study entails a specific physiological pathway exploited for osteogenic induction. For instance, Li et al. used hASC-derived exosomes two days after osteogenic induction to potentiate the osteogenesis-promoting factor production [18]. In the same study, the chemotactic and proliferative effect on BMSCs were tested and it was found that during the phenotypic translation of the MSCs, its chemotactic and proliferative effects may be lost [18]. Another important pathway found to be involved with exosome release from stem cells is the PI3Akt pathway, as the exosomes derived from human-induced pluripotent stem cells (hIPSCs), integrated into tricalcium phosphate, were seen to enhance bone regeneration through the phosphoinositide 3-kinase (PI3Akt) pathway [1][22].

As demonstrated in Table 2, Wang et al. studied the effect of both free exosomes and those encapsulated in an FHE hydrogel on HUVEC cells and found that sustained release from the hydrogel supported a better growth by being less toxic to the cells and providing the required stimulus [25][26]. The FHE (F127/OH-EPL) hydrogel offered a tissue-responsive behavior by having thermally responsive gelation, water retaining ability, as well as antibacterial and adhesive properties [25][26]. Loading with exosomes has shown an enhanced angiogenetic potential in a diabetic mice model [25][26]. They successfully demonstrated good injectability, self-healing, antibacterial activity, and stimuli-responsive exosome release [25][26]. Similarly, a self-healing hydrogel consisting of a methyl-cellulose–chitosan hydrogel with placental mesenchymal stem cell (PMSC)-derived exosomes was also shown to be capable of diabetic wound healing, where neo tissue formation with similarity to natural skin was achieved [30].

Skin regeneration has long been associated with aesthetic and plastic surgery [14]. Duncan et al. recently added exosomes with polydioxanone (PDO) threads in micro lifting surgery, which enhanced the bio stimulatory potential, and thus resulted in a faster clinical outcome [31]. Neural regeneration is also an exciting area where exosomes have been tested and proven helpful [32][33]. Exosomes from hGMSCs with chitin conduits were experimented on in a rat model by Rao et al., and the results showed improved repair of sciatic nerve damage [28].