Nanomedicine is a multidisciplinary field  for medical purposes and can be defined as the use of nanomaterials for diagnosis, monitoring, control, prevention, and treatment of diseases.

Although this global mortality has recently dropped worldwide thanks to the discovery of antimicrobials and the use of adequate treatments, death rates continue to differ depending on the economy of each country [3]. Despite the existence of many adequate antimicrobial treatments, these will always be connected to the problem of antimicrobial resistance. The introduction in the clinical practice of a new antibiotic is followed by the detection of resistant microorganisms after some variable period in almost all cases. This antimicrobial resistance is due to three major factors: (1) the increasing frequency of antimicrobial-resistant phenotypes among microbes as a result of the selective pressure which the widespread use of antimicrobials exert on the microbes; (2) the globalization, which allows the rapid spread of pathogens from a specific localization to the whole world; and (3) the inappropriate use of antimicrobials in many different settings [4]. The importance of antimicrobial resistance seems to be increasing, and a multidisciplinary, collaborative, regulatory approach is imperiously required for combating this problem, this approach should mainly include rational use of antimicrobials, regulation on over-the-counter availability of antibiotics, improving hand hygiene and improving infection prevention and control, but also the understanding of resistance mechanism and innovation in new drugs and vaccines [5]. One of these innovative approaches is nanomedicine.

Nanomedicine is a multidisciplinary field that is based on the application of nanotechnology for medical purposes and can be defined as the use of nanomaterials for diagnosis, monitoring, control, prevention, and treatment of diseases [6][7][8][9][10][11][12] (Figure 1). Nanomedicine intends to change the clinical practice and introduce novel medicines for both diagnosis and treatment, which can: (1) integrate effective molecules that otherwise could not be used due to their intrinsic high toxicity, (2) exploit multiple mechanisms of action, (3) maximize efficacy whilst dose and toxicity are reduced, and (4) provide drug targeting, controlled and site-specific release [7][11][13]. One of the most used nanomaterials in nanomedicine are nanoparticles, nano-scale particles that show highly tunable physical and optical properties and the capacity to form a wide library of compounds [13]. This manuscript is intended to be a comprehensive review of the available recent literature on nanoparticles used for the prevention and treatment of human infectious diseases caused by different microorganisms from a medical point of view by basing on original articles which talk about what has been made to date and excluding commercial products, but also by highlighting what has not been still made and some clinical concepts that must be considered for futures nanoparticles-based technologies applications. 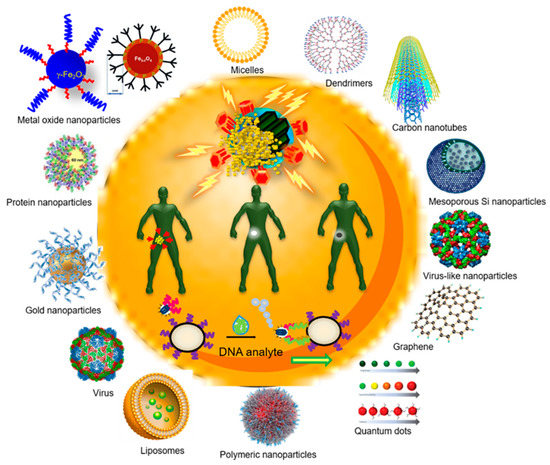 Figure 1. Different types of nanoparticles, both inorganic and polymeric ones, are represented on the outside. Inside, the different functions that can be achieved with the use of nanomedicine are represented: drug release and targeted therapy (improving the pharmacological profile, specific release to target tissues, overcoming biological barriers, and reducing side effects), diagnosis (increased sensitivity, speed and accuracy, early diagnosis, and specific detection of pathological biomarkers), theranosis (focused detection and therapy of diseases, visualizing and evaluating the effectiveness of treatment), and nanodevices (biosensors with greater accuracy and sensitivity, and nanorobots for detection and repair at the cellular level).

2. Nanoparticles Types and Their Uses

A nanoparticle (NP) is a nanoscopic object with three external nanoscale dimensions [8] generally ranging from nanometers or minus to micrometers [14] which may show antimicrobial properties per se or even act as an antimicrobial carrier. One of the main attractions of NPs is the possibility of functionalization. Functionalization allows altering the chemical and physical properties of an NP with a specific purpose or multiple ones (multifunctionalization). This process can give rise to local or directed antimicrobial delivery, prolong antimicrobial effects, facilitate transport into target microbial cells, and/or locate an area of infection, among others [10][15][16]. This functionalization can be carried out by incorporating different components such as surface ligands that mediate the specific attachment of NPs, linker molecules that release the cargo carried by the NP at the desired site in response to a concrete environmental trigger, one or more therapeutic cargoes that are transported by the NP, and/or a coating, which is generally designed for improving the biocompatibility and bioavailability of the NPs in the inside of human body [16][17].

Considering the temporal order, NPs related to an infection can be divided into NPs from the old toolbox (e.g., liposomes, viruses, and dendrimers), and the young toolbox (e.g., mesoporous silica NPs, carbon nanotubes, fulerenes, graphene). However, the main classification used classifies them into two categories: (1) inorganic and (2) polymeric NPs.

These NPs include metal and metal oxide NPs which can be synthesized from metals such as gold (Au), silver (Ag), copper (Cu), and/or aluminum (Al) NPs, metal oxides such as iron oxide, magnesium oxide (MgO), titanium oxide (TiO2) and zinc oxide (ZnO) NPs, and semiconductors such as silicon and ceramics [18]. Inorganic NPs can withstand harsh process conditions and have been considered safe materials for humans and animals [19]. The antimicrobial effect of these NPs depends on certain characteristics such as size, shape, ζ-potential, ligands, pH, roughness, stability, crystal structure, and material used, but the relationship between these characteristics and their antimicrobial ability is not well-understood to date [20][21]. Their antimicrobial abilities may generally result from at least four mechanisms: reactive oxygen species (ROS) generation, metallic cations release, nanoparticles accumulation on the immediate environment of microbes, and nanoparticle internalization [22]. Furthermore, microbicidal properties from inorganic NPs do not use to select resistance [20][21]. Among inorganic NPs, worthy of note is the mesoporous silica NPs (MSNPs). These nanoparticles are characterized by high chemical stability, high mechanical and heat resistance, and high specific surface area of 1000 m2/g. They can be chemically synthesized with particle sizes between 75 and 150 nm, with pore diameters between 2 and 12 nm. Each nanoparticle has about 1400 pores, which provides excellent charge storage inside the nanoparticle to store various molecules, particularly drugs. And they have silanol groups that are key to functionalize both its surface and its interior to suit the specific function being pursued [23]. All these features together back up MSNPs as a more than promising nanocarrier for locally antimicrobial delivery for the treatment of different infections [9][10][17][24][25][26].

These NPs are made mostly from organic matter. Organic NPs are less stable than inorganic ones, especially at high temperatures and/or pressures [19], but otherwise show excellent biocompatibility, stability, targeting efficiency, and low-hydro-soluble drug storage [27][28]. They represent more than two-thirds of the nano-systems [20][29]. Examples of organic NPs are liposomes, polymeric NPs, micelles, dendrimers, and solid lipid NPs. Liposomes are spherical nanocarriers with a size between 20 and up to 1000 nm [30] which are made from phospholipid bilayer with an aqueous core [28]. Polymeric NPs are colloids solids with a size from 10 to 1000 nm and can be made from polycaprolactone, polyacrylate, but also natural polymers such as alginate, and chitosan or even proteins like albumin [31]. Micelles are also spherical nanocarriers composed of a surfactant monolayer, their size is ranged between 10 and 1000 nm [31]. Dendrimers are symmetrical macromolecules with a sized ranging from10 to 100 nm composed of three parts (a core, a hyper-branched zone, and terminal functional groups) which allows them to charge multiple chemical molecules and to display multiple surface groups [32]. Lipid solid NPs are formulated from lipids which are solid in the physiological temperature and stabilized by emulsifiers and show a size that varies between 10 to 1000 nm [33]. Some advantages of organic NPs such as drug protection against harsh environmental situations, ease of large scale production using high-pressure homogenization technique, biocompatibility, and biodegradability set them up as a better alternative lipid-based system [33]. Nanoemulsions are colloidal dispersions composed by small oil droplets suspended in an aqueous phase whose size varies between 20 to 200 nm [34].