Hydrogen peroxide (H2O2) is an important oxidation molecule regulating aerobic metabolism. Redox signals include physiological oxidative stress (EU stress), and excessive oxidative stress can damage molecules. The main enzyme sources of H2O2 are nicotinamide adenine dinucleotide phosphate oxidase or NADPH oxidase (NOx), mitochondrial respiratory chain and various kinds of oxidase. NOx family consists of seven enzyme subtypes, which produce a superoxide anion (O2 -) which can be converted to H2O2 by superoxide dismutase or spontaneously. H2O2 passes through the membrane through some aquaporin (AQP), which is called porphyrin hydroperoxide. It diffuses in cells and tissues, triggering cellular effects such as proliferation, immune cell recruitment and morphological changes.

For a long time, ROS were considered as molecules or entities that could generate damage at different levels, be they cellular, tissue or even at the organ level, or that their production was linked to enzymatic reactions which involve oxygen intermediaries. Its production causes an imbalance in the oxide-reduction (redox) state of the cells. In phagocytes, ROS are produced by the activation of NOX to destroy pathogens during phagocytosis [8]. However, in the last 20 years, it has been shown that the generation of ROS is linked to a variety of essential biological processes, where they participate in the regulation of some metabolic pathways, either negatively or positively. These processes include cell development and differentiation, generation or crosslinking of the extracellular matrix, hormone biosynthesis, cell aging, apoptosis, the responses of oxygen changes (oxygen detection), growth factors, hormones, and cytokines.

Hydrogen peroxide (H2O2) is an important oxidizing molecule that regulates the metabolisms of aerobic organisms. Redox signaling comprises physiological oxidative stress (eustress), while excessive oxidative stress causes damage to molecules. The main enzymatic generators of H2O2 are nicotinamide adenine dinucleotide phosphate oxidases or NADPH oxidases (NOXs) and mitochondrial respiratory chains, as well as various oxidases. The NOX family is constituted of seven enzyme isoforms that produce a superoxide anion (O2−), which can be converted to H2O2 by superoxide dismutase or spontaneously. H2O2 passes through the membranes by some aquaporins (AQPs), known as peroxyporins. It diffuses through cells and tissues to initiate cellular effects, such as proliferation, the recruitment of immune cells, and cell shape changes. Therefore, it has been proposed that H2O2 has the same importance as Ca2+ or adenosine triphosphate (ATP) to act as modulators in signaling and the metabolism.

NOXs represent a family of enzyme complexes present in the membrane which generate ROS. This complex is widely distributed in eukaryotic organisms [9], and recent results indicate that they are also present in bacteria [10]. The first NOX was described in neutrophils and produces a large amount of ROS as a defense system [11]. The catalytic subunit of this enzyme was named gp91phox and is now called NOX2. The development of more of sensitive assays allowed the detection of low amounts of ROS in other cells [12]. NOX1, also known as Mox1, was the first NOX2 homolog to be identified [13]. In mammals, the NOX family is formed by seven members: NOX1, 2, and 3, activated by cytoplasmic subunits; NOX4, which is constitutively active; and NOX5 and DUOX1 and 2, which bind calcium. The product of NOX isoforms is O2−, which rapidly changes to H2O2 [14].

NOX family members have different regulation processes, but they share a catalytic core with two domains: the dehydrogenase and the transmembrane domains [15]. Electrons are transferred from cytosolic NADPH to FAD in the dehydrogenase domain, then to the inner and outer hemes in the transmembrane domain, and finally to the O2 outside the cell, producing O2−, as shown in the following reaction:

NOXs localize in different tissues and membrane compartments, allowing the spatiotemporal organization of ROS signaling. The expression of NOX enzymes in various tissues supports the idea that ROS production is not exclusive to phagocytic cells. The fact that some of these enzymes produce low levels of ROS suggests that they may be participating in other cellular functions than the inflammatory response [20]. NOX2 is referred as phagocyte NADPH oxidase. However, it is also found in other cells such as hepatocytes, endothelial cells, smooth and skeletal muscle, neurons, cardiomyocytes, and hematopoietic stem cells. NOX1 and NOX2 share a 60% amino acid identity. NOX1 is expressed more in the colon epithelium, while NOX3 is almost exclusively expressed in the inner ear. NOX4 expression is strongly observed in the kidney and at moderate levels in vascular endothelial cells, vascular smooth muscle, murine osteoclasts, murine adipocytes, and the pancreas. NOX5 is expressed in the human spleen, testis, and vascular smooth muscle. The dual oxidases DUOX1 and DUOX2 are the H2O2-producing isoforms of the NADPH oxidases (DUOXs) are highly expressed in the thyroid, but they can also be expressed in other cells.

2.3. Structure and Regulation of NOX

NOX isoform structures were deduced from studies on NOX2 [14]. There are structural properties of NOX2 that are similar to all members of the family. NOX complexes consist of one catalytic subunit and five regulatory subunits (p22phox, p47phox, p67phox, p40phox, and Rac). The catalytic subunit has six transmembrane domains (seven for DUOX1-2) and four hemes in the third and fifth transmembrane domains, as well as an NADPH-binding domain and an FAD-binding domain in the C-terminal in the cytosolic region. NOX5 has additional EF-hands and Ca2+-binding domains at the N-terminus, and DUOX enzymes have EF-hands and a peroxidase-like domain at the N-terminus. NOX2 forms a complex membrane with a stabilizing factor, p22phox [21]. In unstimulated cells, NOX2 and p22phox are found in the plasma membrane, with p67phox associating with the proline-rich region (PRR) of the p47phox in the cytosol. The p47phox has two Src homology 3 (SH3) domains for its association with the PRR of the p22phox [22]. In the resting state, the auto inhibitory region AIR in the p47phox combines with the bis-SH3 domain and the domain phagocyte oxidase (PX) of the p47phox, preventing its binding to p22phox and membrane lipids [23]. The cytoplasmic component p40phox is associated with p67phox. Rac attached to guanosine 5′-diphosphate (GDP) is associated with RhoGDP dissociation inhibitor (RhoGDI) in the cytosol. Rac is a member of the Rho family, and there are three expressed isoforms of Rac: Rac1, Rac2, and Rac3. Rac1 is expressed in non-hematopoietic cells and activates many NOX isoforms. In contrast, Rac2 is expressed in hematopoietic cells, and Rac3 is predominantly found in the central nervous system [24][25]. The phagocytosis of bacteria induces phosphorylation in p47phox and conformational change, allowing its interaction with p22phox [14][22]. Subunit p47phox, attached to the membrane, transports the activator subunits p67phox and p40phox to NOX2 [26]. Phagocytosis also causes the generation of Rac2-GTP, which is released from the RhoGDI. Rac-GTP goes toward the membrane and interacts with NOX2 and p67phox [27][28]. The assembled complex generates superoxide in the extracellular space (Figure 1). 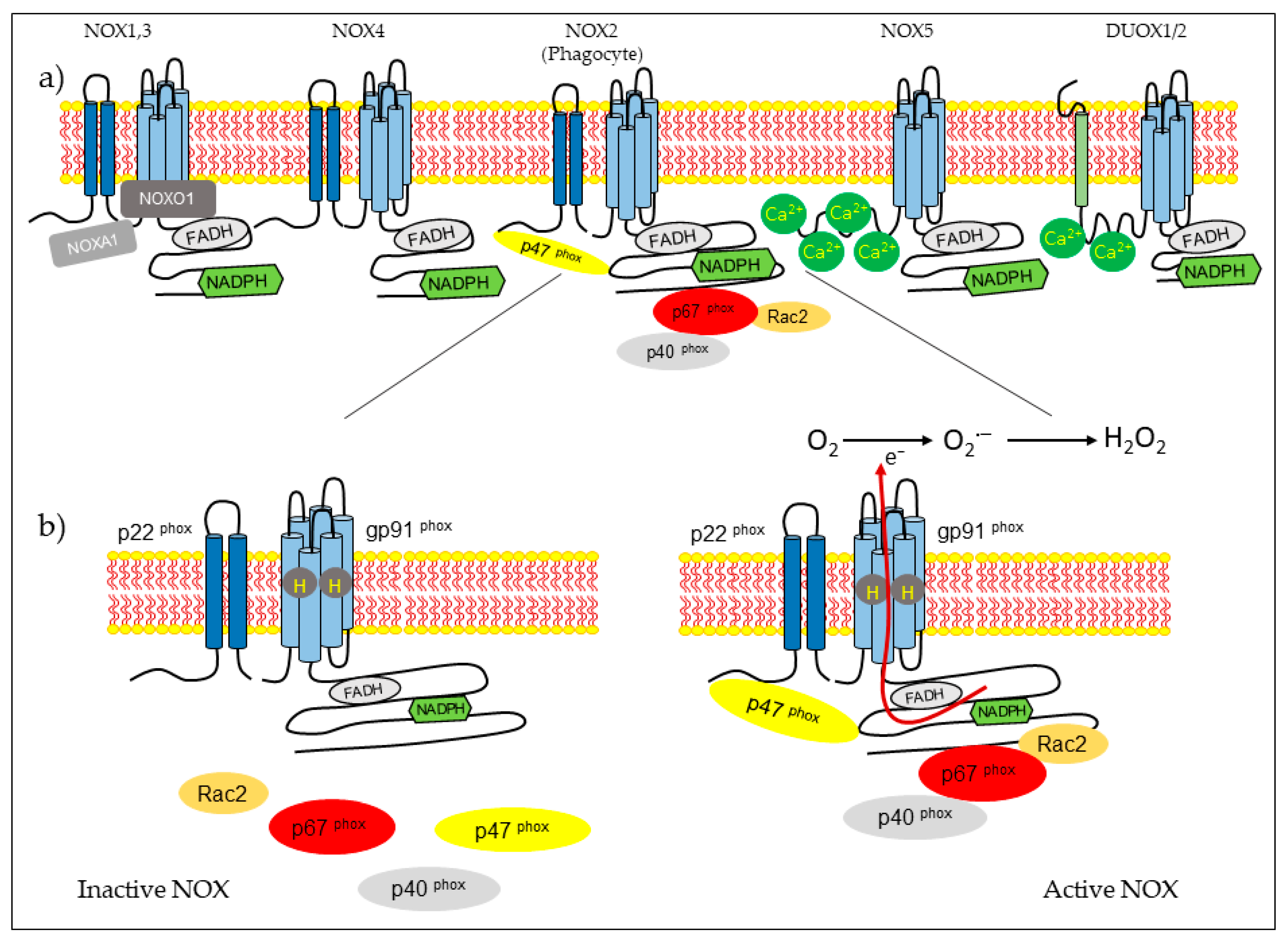 Figure 1. NADPH oxidase (NOX) types and activation of the NOX2 macrophage for the formation of reactive oxygen species. (a) Structure of the isoforms that are part of the NOX family. (b) Activation of the NOX2 system, which occurs by the assembly of cytosolic regulatory proteins (p40phox, p47phox, p67phox, and Rac2) with the catalytic subunit gp91phox and p22phox in the membrane, to activate the enzyme complex and generate superoxide anions (O2−) and hydrogen peroxide (H2O2).

The other isoforms share some characteristics of NOX2 activation. The NOX1 isoform exhibits 60% of its identity with NOX2. Its activity depends on cytosolic subunits. NOX1 requires p22phox, Rac GTPase, the first organizer (NOXO1), which is a homolog of p47phox, and the first activator (NOXA1), a homolog of p67phox [29]. NOX3 shares 56% of its amino acid identity with NOX2 [30]. This NOX requires NOXO1 and NOXA1 for activation, but p47phox, p67phox, and Rac have not been studied [31]. NOX4 shares approximately 39% of it sequence homology with NOX2. This isoform is constitutively active, and its activity depends on p22phox [32]. Recently, it has been described that polymerase δ-interacting protein 2 (POLDIP2) regulates NOX4 [33]. NOX5 comprises five isoforms: a, b, c, d, and e or S [34][35]. NOX5 a–d isoforms have an intracellular domain that contains a Ca+2 -binding EF-hand region [36]. NOX5 a–d isoforms do not require p22phox or cytosolic subunits for activation, but they need cytosolic calcium. Heat shock protein 90 (HSP90) has been described as a regulatory protein for NOX1–3 and NOX5 [37]. The NOX5 e isoform lacks a Ca2+-binding domain and depends on the cAMP response element-binding protein for activity [38]. DUOX1 and DUOX2 were first identified in the thyroid gland. These enzymes share 50% of their amino acid identity with NOX2 [39]. They have a NOX domain similar to that of NOX1-4, an EF-hand region similar to NOX5, and a seventh transmembrane peroxidase-like domain. Both dual oxidases have been identified in the plasma membrane and endoplasmic reticulum [40]. The permanence of DUOX proteins in the endoplasmic reticulum depends on the maturation factors of DUOXA1 and DUOXA2. The DUOX2 immature form generates O2−, whereas the mature form generates H2O2 [41]. Las proteínas DUOX no necesitan un activador citosólico o subunidades organizadoras para su activación, pero sí requieren calcio [42].