Nintedanib is an unusual molecule that does not occur in nature. It is a purely synthetic compound obtained in 1998, during a lead optimization program for small-molecule inhibitors of angiogenesis [1]. From the chemical point of view nintedanib (development code BIBF 1120) is a small molecule (MW = 539,6248 g/mol), ethanesulfonate diastereomer of methyl (3Z)-3-{[(4-{methyl[(4-methylpiperazin-1-yl)acetyl]amino}phenyl)amino](phenyl)methylidene}-2-oxo-2,3-dihydro-1H-indole-6-carboxylate. It is a derivative of indolinone, a secondary amine composed of a benzene and pyrrole ring. It is highly crystalline (mp = 305 °C) and exhibits a lipophilic character (log P ≈ 3.0) and good aqueous solubility (>20 mg/mL in water) [2]. The chemical structure is shown in Figure 1.

Nintedanib (ATC code: L01XE31 [3]) is an orally active tyrosine kinase inhibitor. It has been evaluated in large clinical trials for the treatment of idiopathic pulmonary fibrosis (IPF) (ICD-10-CM code: J84.112 [4]), a fatal disease leading to progressive loss of lung function. This disease involves uncontrolled proliferation of lung fibroblasts and excessive deposition of extracellular matrix (ECM) by myofibroblasts [5][6]. Six years ago, nintedanib was globally approved as the first drug in the treatment of IPF [7][8][9]. In the EU it was approved for the treatment of lung cancer in 2014 [10][11]. In March 2020, the FDA extended its use in the US to treat chronic fibrosing interstitial lung diseases (ILD) with a progressive phenotype (trait) [12]. It should be emphasized here that nintedanib is the first targeted chemotherapy in patients with IPF and currently one of only two drugs available for IPF [2]! Molecularly targeted cancer therapy involves a selected class of drugs which play an important role in the carcinogenicity or proliferation of the tumor. The mechanism of their action consists of inhibition of growth and spread of cancer. This is done by interfering with specific molecules critical to tumor progression, for example a specific tyrosine kinase agent. Currently available evidence suggests that the molecularly targeted cancer therapy therapeutic effects are comparable or in some cases higher with respect to the effects of classical methods, i.e., chemotherapy and radiotherapy. It seems reasonable to suggest, at this point, that molecularly targeted therapy is safer for normal cells.

2. Concomitant Use of Nintedanib and Antithrombotic Drugs

Data available from clinical trials on the concomitant use of nintedanib and antithrombotic agents is very limited as this patient group was within the standard exclusion criteria. The studies included patients with low-dose prophylactic heparin, after heparin boluses in intravascular procedures, low-dose ASA (below 325 mg/d), 75 mg/d clopidogrel or an equivalent dose of other drugs. Postmarketing data review showed that over a period of approximately 1 year, bleeding adverse events occurred in less than 5% of 6758 nintedanib-treated patients, with less than 1% of patients having major bleeding events. These data refer to both patients using and not using anticoagulation therapy. The German real-life study concerned 64 patients treated with nintedanib, and 43.7% of them received concomitant anticoagulation therapy: 21.8% received ASA, 10.9% VKA or DOACs and 4.7% combined therapy (ASA + OAC). During a median follow-up of 11 months (1 to 29 months), only 1 bleeding event was noted in the patient receiving combination therapy [13].

The search for an ideal anticoagulant drug that can be taken orally at a fixed dose without the need to monitor blood clotting parameters during its use has been ongoing for a long time. Until recently, the only therapeutic option in chronic anticoagulant therapy was the use of oral vitamin K antagonist (VKA) anticoagulants such as warfarin and acenocoumarol. These drugs, despite proven effectiveness in many clinical trials, including in the prevention of embolic complications in patients with atrial fibrillation (AF), have several significant drawbacks that DOACs do not have. The new non-vitamin K antagonist oral anticoagulants have now become a safe and effective alternative to oral vitamin K antagonists. Due to their favorable efficacy and safety profile, predictable anticoagulant effect, no need for constant monitoring of clotting parameters, less intense interactions with food compared to VKA, DOACs have become the drugs of first choice in the anticoagulant treatment of patients with atrial fibrillation [14] (Figure 1). 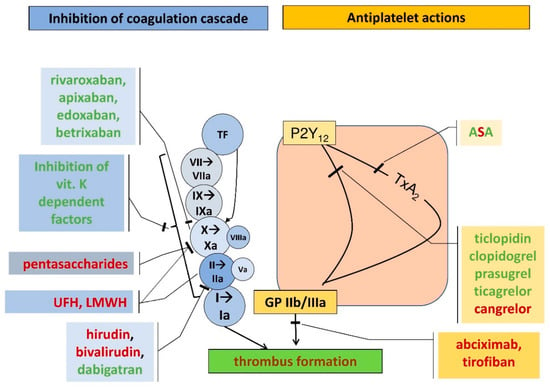 2.2. Inclusion of DOACs in View of Bleeding Risk

Based on the conducted trials and the 2016 ESC guidelines for the management of patients with atrial fibrillation, in patients at high risk of gastrointestinal bleeding, the following doses should be considered: VKA or apixaban in the full dose of 2 × 5 mg or other DOACs in reduced doses (dabigatran 2 × 110 mg, rivaroxaban 1 × 15mg, edoxaban 1 × 30mg/d).

The main assumption of anticoagulation therapy is to provide the patient with effective protection against thromboembolic complications and to minimize the risk of bleeding. For this purpose, several scores have been developed, which are aimed at identifying modifiable risk factors for major bleeding. The most recognized scores are:

HAS-BLED score (hypertension, abnormal renal and liver function, stroke, history of bleeding, labile INRs, elderly >65 years of age, drugs/alcohol use) enables the risk of bleeding complications to be assessed and directs attention to potentially reversible risk factors. Special attention should be paid to patients with a HASBLED score of 3 or more, as they should be periodically monitored and potentially reversible risk factors should be corrected [24]. The AMADEUS trial confirmed that the HAS-BLED score best represents the risk of clinically significant bleeding in patients with atrial fibrillation treated with anticoagulants [25].

The ORBIT scale (Outcomes Registry for Better Informed Treatment of Atrial Fibrillation—a registry conducted in 176 centers in America) was created on the basis of a two-year follow-up. The aim of the trial was to identify independent factors influencing serious bleeding complications in patients receiving oral anticoagulants. The researchers created a numerical bedside risk score that included the five risk factors that were easy to measure: (1) age ≥75 years, (2) decreased values of hemoglobin and hematocrit, history of anemia, (3) bleeding history, (4) renal failure, (5) antiplatelet therapy. On this basis, a new tool was created—the so-called ORBIT scale [26].

According to the ESC guidelines, risk factors for bleeding in patients treated with anticoagulants can be divided into modifiable and nonmodifiable. The first group includes: hypertension, labile INRs or time in the therapeutic range <60% in patients treated with VKA, use of drugs predisposed to bleeding, i.e., anti-aggregating drugs, NSAIDs, excessive alcohol consumption (over 8 drinks a day). Potentially modifiable risk factors for bleeding include: anemia, abnormal kidney function, and abnormal liver function. In turn, the nonmodifiable risk factors for bleeding are: age (>65 years), history of major bleeding, recent stroke, chronic kidney disease requiring dialysis therapy or a transplanted kidney, liver cirrhosis, cancer, genetic factors. There is also a group of bleeding risk factors based on biomarkers such as highly sensitive troponins, growth differentiation factor 15, creatinine clearance or serum creatinine concentration [30].

A particularly important consideration when using DOACs is the reversal of drug action in the event of life-threatening bleeding. The first-line specific antidote to dabigatran is idarucizumab, and in its absence, the prothrombin complex factor concentrate (PCC).

Until recently, there was no antidote to reverse the anticoagulant effect of DOACs. However, since 2015, the widely available idarucizumab (an intravenously administered chimeric antibody) can be used as an antidote to dabigatran [31]. It is a fragment of humanized monoclonal antibody that binds to dabigatran with an approximate 300-fold higher affinity than thrombin. The idarucizunab-dabigatran complex has a high binding rate and a very slow degradation rate, which makes it very stable. Idarucizumab binds strongly and specifically to dabigatran and its metabolites, neutralizing their anticoagulant activity. It does not reverse the effects of any other antithrombotic drugs. The recommended dose is 5 g (2 vials of 2.5 mg idarucizumab, 2 boluses or infusions over 5−10 min). No dose adjustment is required in patients with hepatic and renal dysfunction or in the elderly.

Ciraparantag (aripazine, PER977) is a universal agent for factor Xa inhibitors, direct thrombin inhibitors and heparins [31]. It is a small, positively-charged molecule that binds noncovalently to all factor Xa inhibitors (including fondaparinux, low-molecular-weight and unfractionated heparin) and dabigatran, without binding to other clotting factors or albumin. In a study in a mouse tail model, ciraparantag reduced bleeding during treatment with DOACs and normalized clotting time. It had no significant effect on hemostasis when the drug from this group was not used [32]. In healthy volunteers, ciraparantag completely reversed the anti-Xa activity of rivaroxaban and apixaban, even at twice their therapeutic concentration [32]. A placebo-controlled phase I trial on 80 healthy volunteers assessed the safety, tolerability, pharmacokinetic and pharmacodynamic effects of ciraparantag when administered intravenously at doses of 5–300 mg, 3 h after administration of edoxaban 60 mg or alone. Ciraparantag administered at doses of 100−300 mg caused a reversal of the anticoagulant effect within 10−30 min, and its effect was sustained for up to 24 h. Potentially drug-related adverse events included transient facial erythema, dysgeusia, and moderate headache. There were no thromboembolic events associated with the use of ciraparantag and no increase in the concentration of d-dimers and thrombin-antithrombin complexes was observed [33]. The same results were obtained in a trial on healthy volunteers who received a therapeutic dose of enoxaparin [34].

The advantage of DOACs is that they do not require routine anticoagulation monitoring due to their wide therapeutic index [35]. However, there are circumstances where the actual drug levels may be necessary to know. The material used for DOAC level measurement is usually normal 3.2% (0.109 mol/L) plasma citrate.

An indication for DOAC measurement may be the suspicion of excessively high or low DOAC levels. Lower DOAC levels may occur in obese patients (>110 kg), in the case of treatment failure (recurrent thrombotic episodes) or in malabsorption. Too high DOAC levels can be expected in patients with low body weight (<50 kg), renal failure, bleeding, overdose or in the elderly [36].

The indications for immediate DOAC measurement include injury, urgent surgery or fibrinolytic therapy in acute ischemic stroke [36][37][38]. The presence of DOACs in plasma may be indicated by the prolonged times of routine clotting tests, i.e., prothrombin time (PT) and activated partial thromboplastin time (APTT). However, it should be known that the extended PT or APTT depend on the type of drug and its concentration in the sample. In general, APTT is more sensitive to dabigatran and PT is more sensitive to rivaroxaban, apixaban and edoxaban. However, the PT and APTT reagents demonstrate variable degrees of sensitivity to DOACs. Most PT reagents are less sensitive to apixaban than to rivaroxaban and edoxaban [39][40].